If not us, then who? When it comes to keeping trees standing, that’s the question the inhabitants of the world’s forests are asking. 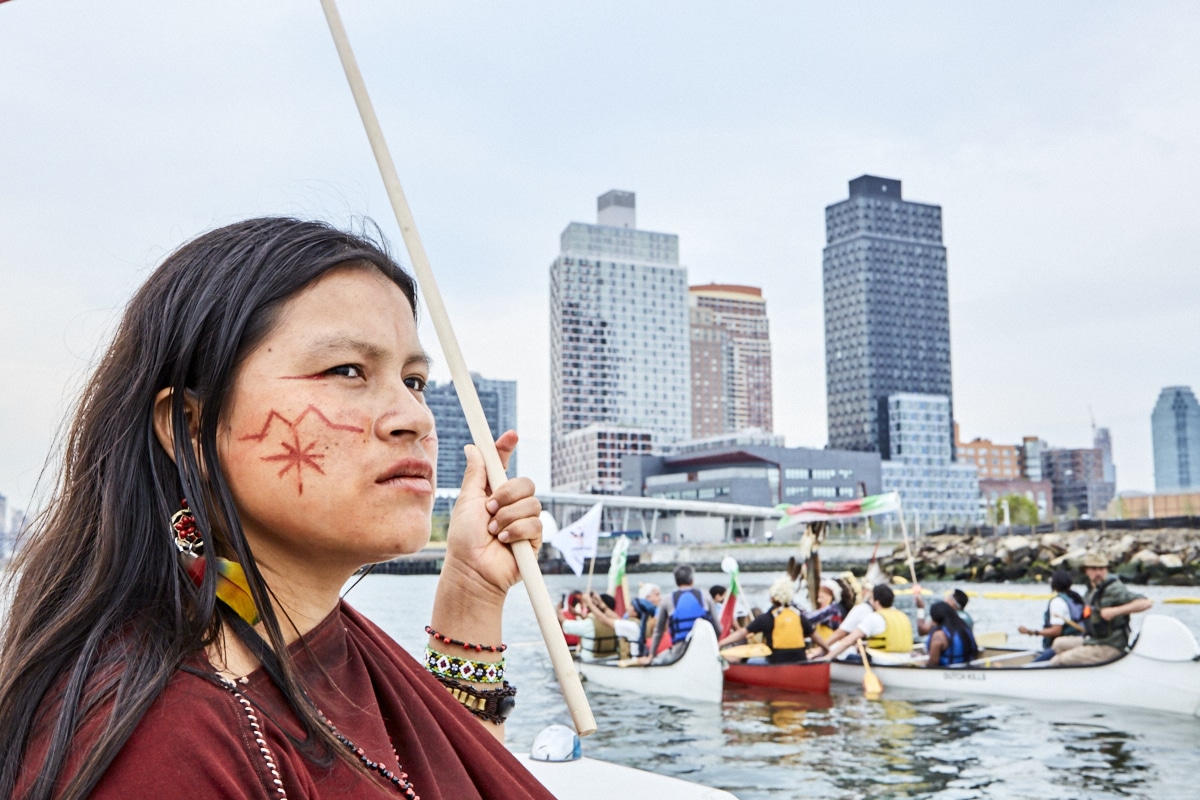 Indigenous communities are stepping up to protect forests – and ultimately, the planet – from increasing deforestation and its effects on climate change. The team at If Not Us Then Who? are giving them the training and tools they need to tell their own stories, and get them heard.

“To highlight the role indigenous and local peoples play in protecting our planet; we work in partnership with communities to make films, take photographs, curate content, commission local artists and host events.” 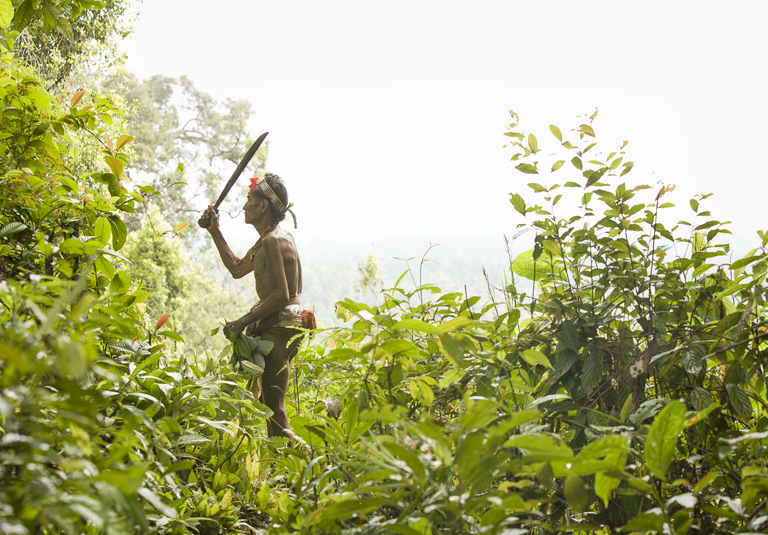 Spend three minutes in the online video library of If Not Us Then Who? and you’ll be lost amongst the trees. Hundreds of curated videos filmed in forests from Peru to Panama and India to Indonesia welcome audiences everywhere into the lives and homes of the world’s tree-defending indigenous communities. Welcome to the jungle…

Working directly with indigenous communities, If Not Us Then Who? create participatory films that tell a story – focusing on capturing the emotional truths of life as a member of an indigenous community protecting their forest home. The films go on to be used by local groups and regional representatives as a campaign tool, while the distribution team shares them and other like-minded documentaries with global north audiences to raise awareness about the threats to the world’s forests and those who live there.

The project was inspired by Filipino climate activist Yeb Saño’s speech at COP 19: “Who will stop this madness of climate change? If not us, then who? If not now, then when?” Founder Paul Redman took Yeb’s point to heart, and launched If Not Us Then Who? at the UN Climate Summit 2014 in New York.

Reaching the goals of the Paris Climate Agreement – like becoming carbon neutral by 2050 – will depend massively on the world’s forests, which take CO2 out of the atmosphere and lock it in the ground as a carbon sink. It’s been found that indigenous communities are the best guardians of the forest, which means that, as Sophia Cheng, If Not Us Then Who?s Head of Communication puts it, “Our indigenous partners are a ready made climate solution.”

But while the big picture is climate change and deforestation, the focus is on human stories.

“We are using the medium of film to build empathy with people who look different and live differently from people living in the global north,” Sophia explains. “While we can’t necessarily relate to depending on the forest day to day, we can relate to a mother being concerned about sending her kids to school, a daughter losing her father, a wife losing her husband. We often launch films in collaboration with research organisations that are releasing analytical data and evidence – to combine statistical analysis and reporting that appeals to the head, with these human story narratives that appeal to the heart.”

Their stories always start with those affected. And rather than only going in and filming indigenous communities – showing environmental and cultural changes through the lens of an intrepid Western cameraperson – the team also run programmes for local groups to learn the camera skills they need to tell their own story.

Filming is a collaborative process, designed to produce something authentic that communities can use for their own campaigns. “When we work with a local group to make a film, we don’t go into the field knowing what the story is – it’s never ‘grab what you want and leave’. There’s no voiceover in the films. The process of making a film is a trust-building exercise as much as a storytelling exercise.”

And for Sophia, it is there that the magic happens: “the joy we get from this work is in that slow building of trust, and the integrity of the relationships with our indigenous partners – which then turns into impacting real lives and facilitating these communities to tell their own stories.”

Storytelling, Sophia says, is a form of creativity that is open to us all – an act of cultural creation out of which a new, brighter future can emerge. “Creativity and storytelling are central to understanding who we are, how we got here, and how we can turn things around. And storytelling is also a central pillar of many indigenous traditions. So creativity is going to be paramount as we move from a mechanistic industrial world into a post industrial world. In the West, creativity is seen as something you either have or you don’t, which is something we’re challenging through film making – to build bridges across different worlds and create the better future that we all desperately need.”

If Not Us Then Who have also used photography as a way to raise money in a time of crisis. Indigenous communities have been badly affected by COVID-19, particularly elders. In a month-long print sale, the Prints for Communities fundraiser brought in $10,000 to support communities worst affected. The annual Our Village event also went online during the pandemic, with speakers including Reverend Yearwood, astronaut Jessica Meir and indigenous leader Rukka Sombolinggi.

Now that If Not Us Then Who? have established relationships with communities around the world, they’ll be doubling down on training local talent and growing their curated library to multiply the number of indigenous-made films on the site. Conversations around these films, Sophia says, is how change will really happen: “we want to build up a following for these films so that when our young filmmakers start to release their films we have thousands of curious people ready to watch the films, congratulate them, challenge them, ask questions, move the conversation forward. That’s what I’m really excited about.” 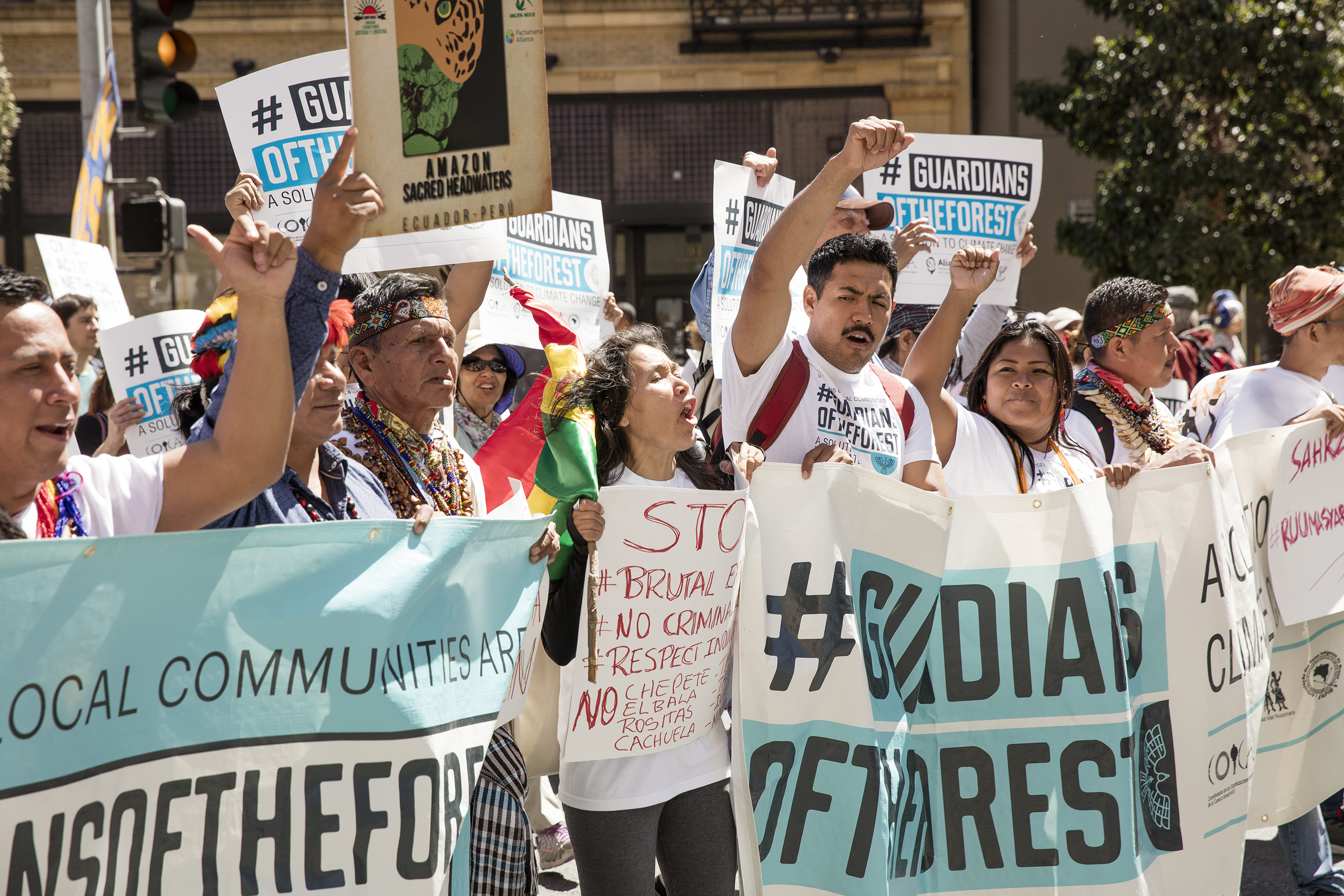 Spread forest love ► Take a wander through the video library or set up a screening.

Read more ► If Not Us, Then Who? was mapped by Hip Hop Caucus.

Covid-19 update ► As the coronavirus reaches every part of the globe, indigenous organisations are preparing themselves. They are also asking for public donations to support them during this pandemic in order to buy food, medicine & hygiene materials for their communities.

Nature-geek, urban forager and all-round wordy sort. Freelance strategist and copywriter for people who care about the future. Often found reading while walking. 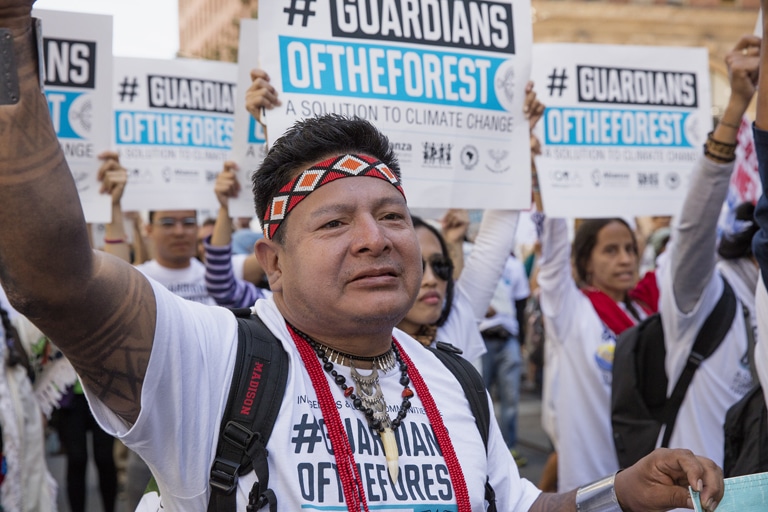 Cándido Mezúa, a tribal leader from Panama, marches at the climate summit rally in San Francisco in 2018 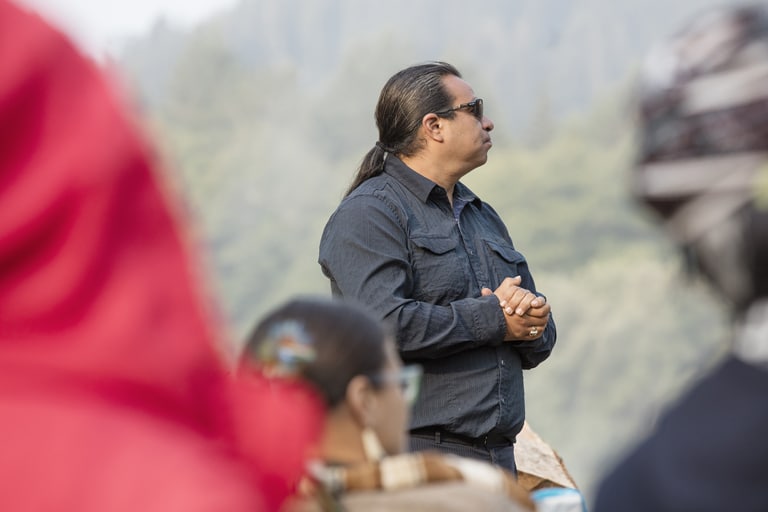 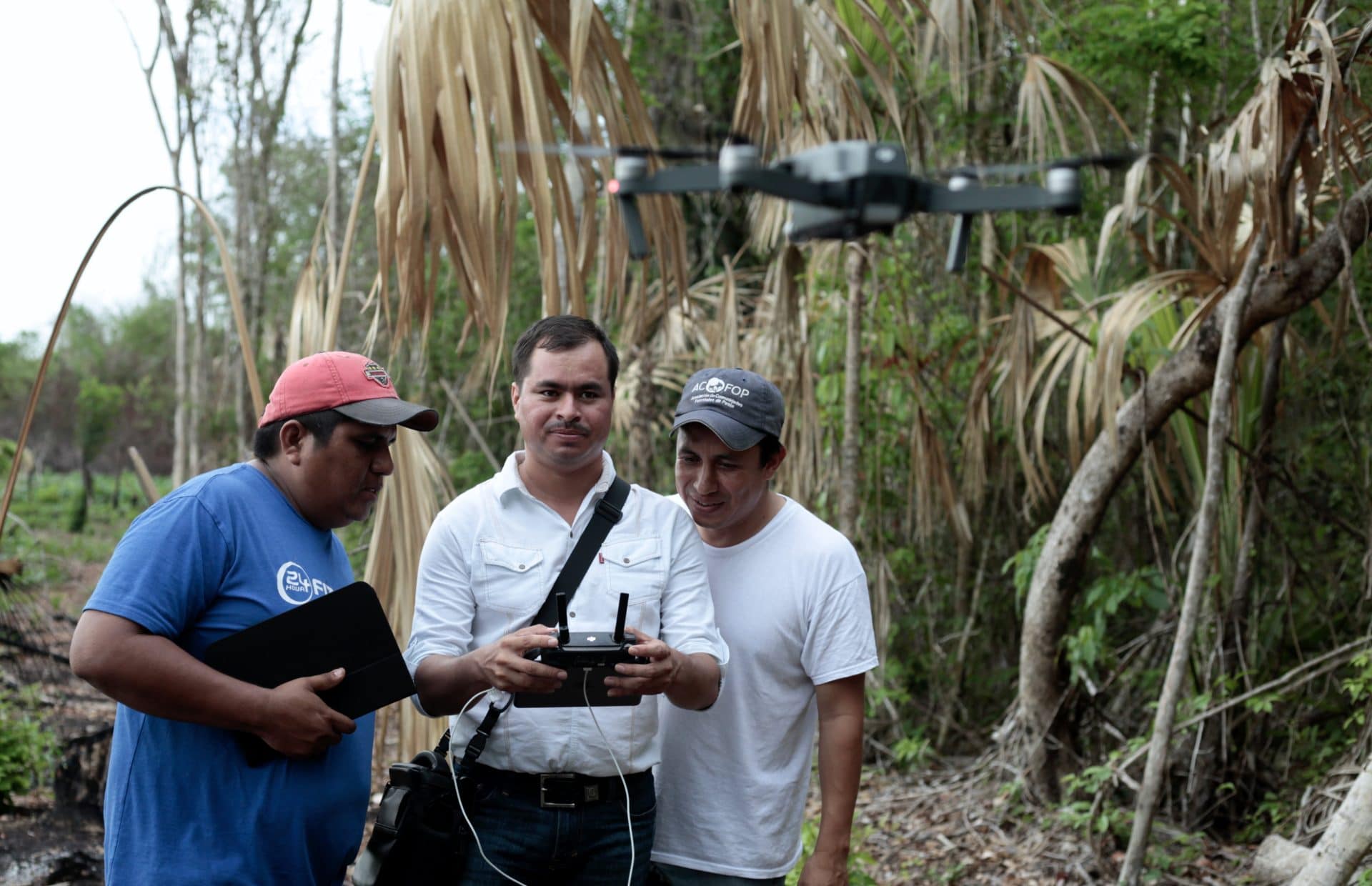 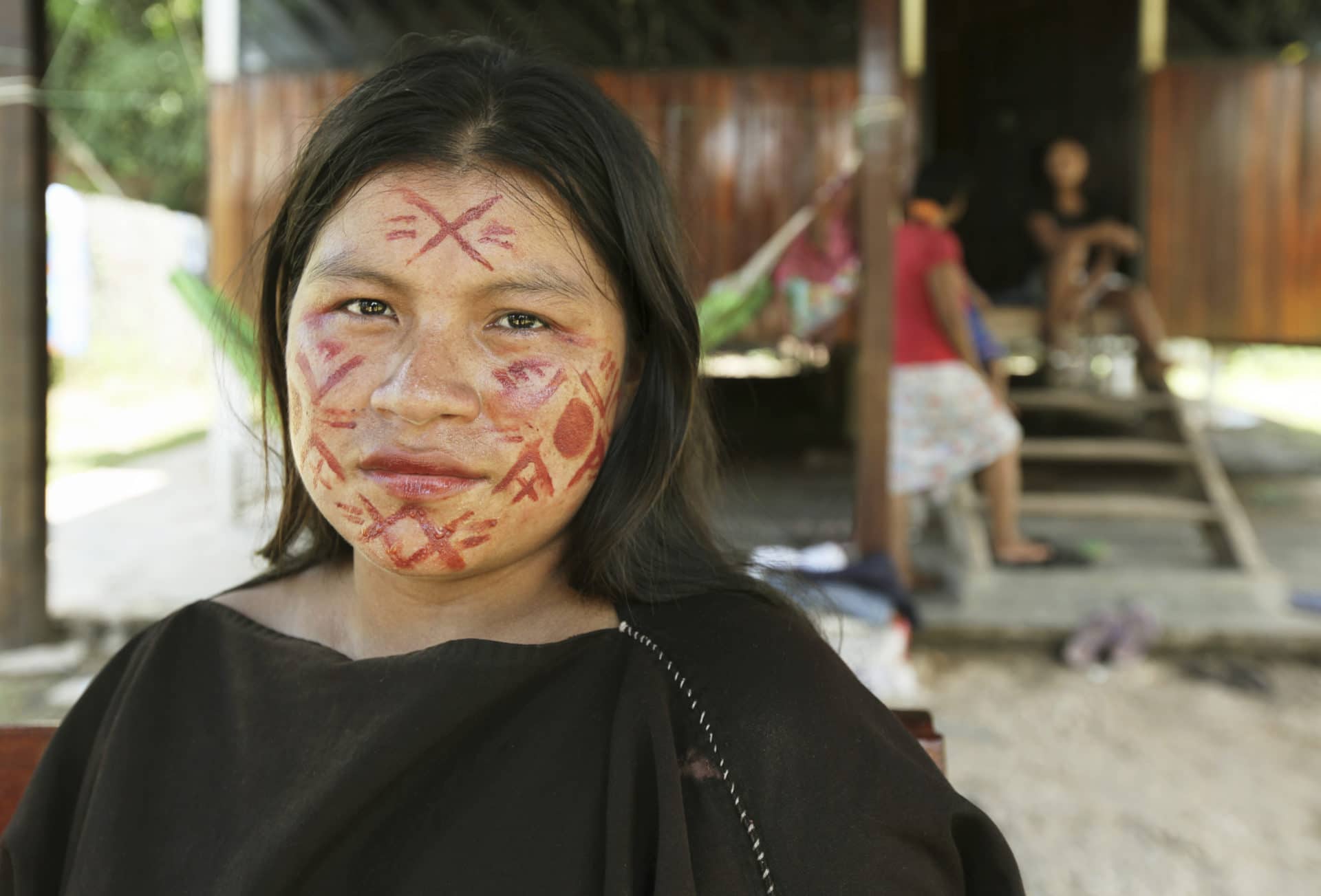 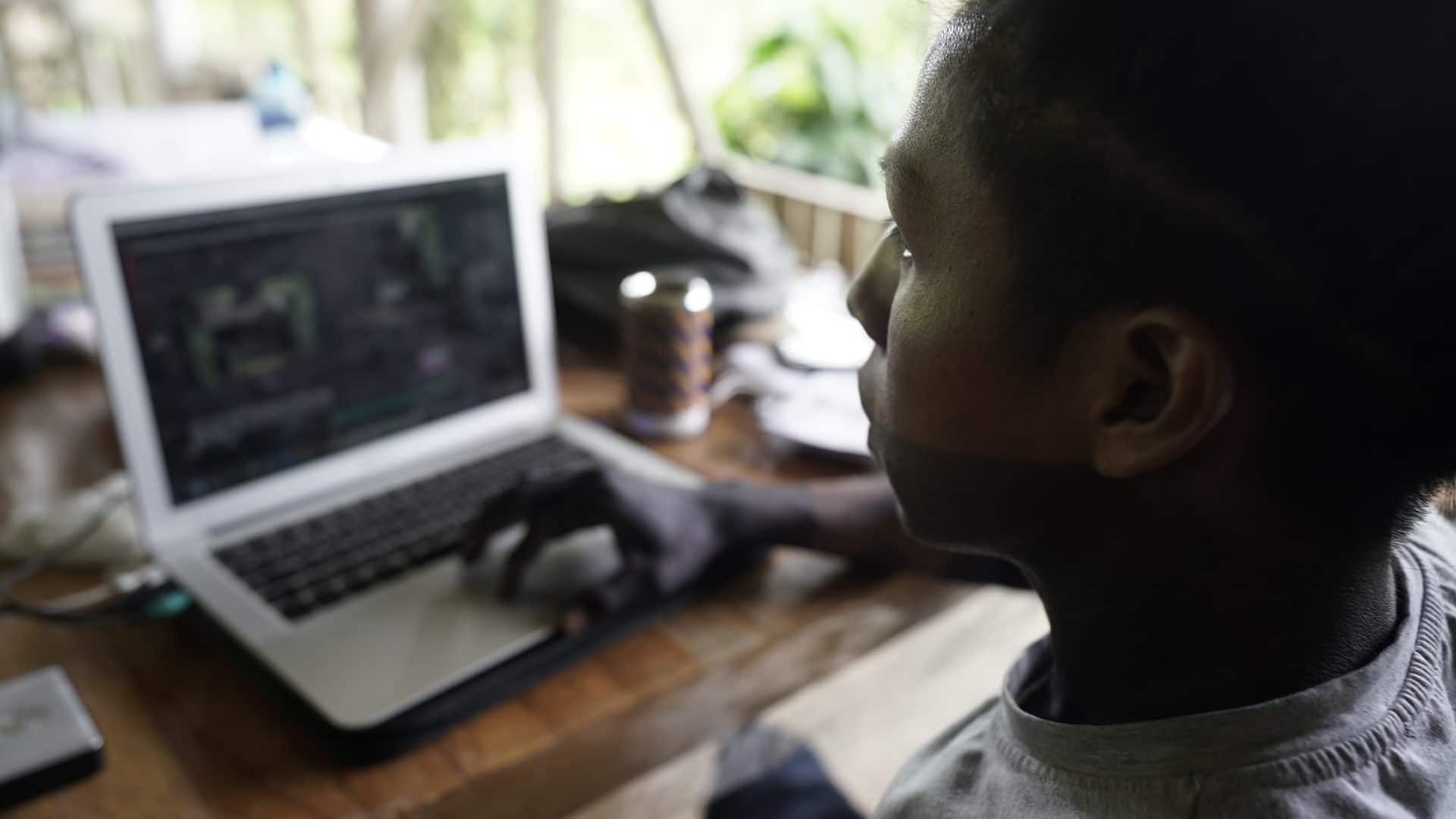