What links Arcade Fire, a marching band in rural Haiti, goats and the circular economy?

Régine Chassagne, from the Montreal-based, Grammy-winning rock duo Arcade Fire, is helping to empower young people from Baille Tourible in Haiti’s Central Plateau with a marching band – and an experimental farm – that’s inspiring an entire community.

Since the beginning of her career, Régine (pictured above) has been moved to use her voice to speak for Haiti and create humanitarian projects, especially since the devastating earthquake of 2010. Her parents were born in Haiti, but fled the dictatorship of François Duvalier in the sixties. Following a visit to Haiti’s Baille Tourible in 2014, the multi-instrumentalist made it her personal goal to gift musical instruments to the young people of the small rural village in so they could start their own marching band. 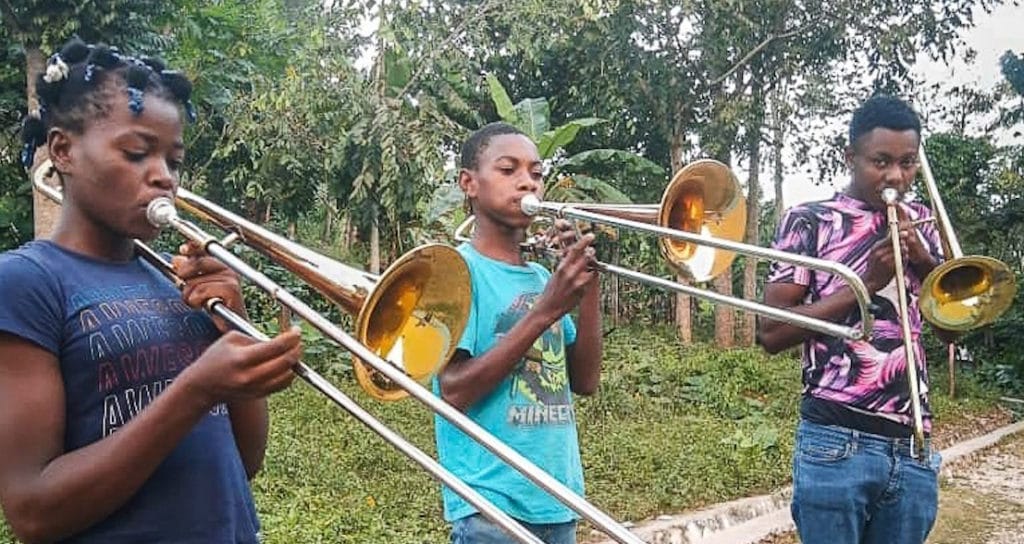 That same year, Régine founded KANPE (which means ‘to stand up’ in Haitian Creole) with Dominique Anglade to bring the diaspora and friends of Haiti together – with the aim of developing customised solutions to empower the neediest Haitian families to become autonomous. A Quebec politician of Haitian descent, Dominique currently serves as the leader of the Quebec Liberal Party and the Official Opposition of Quebec.

Baille Tourible is an isolated village of about 11,000 people with no running water or electricity. With its Integrated Program, KANPE is working to find the best local Haitian organisations and talents who can accompany this community in attaining its goals in health, education, food security and climate resilience, entrepreneurship, leadership and local infrastructure strengthening.

Meanwhile, Jean Germain Duvelsaint, aka ‘Maestro’, directs KANPE’s Baille Tourible Marching Band, a musical group of 80 young people. It has become the pride of the entire community, building up an excellent reputation, giving youth a way to nurture their musical talents, and building their self-confidence to take up the baton as the emerging generation of their community. 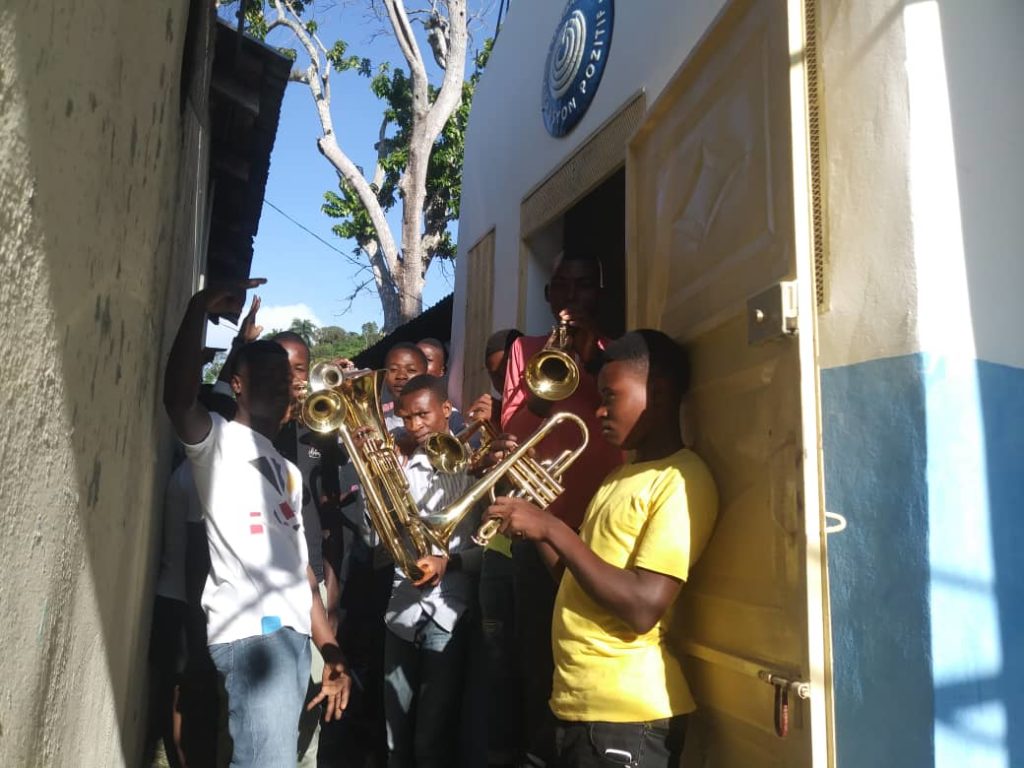 Régine sees the nonprofit’s positive musical influence, particularly among young people: “I was initially concerned that they did not seem to know how to make sounds! Win (Butler) and I have witnessed their rapid and passionate progress; their ensemble is now performing at the level of a US high school marching band. Congratulations to these young teachers, whose leadership inspires the youth.” 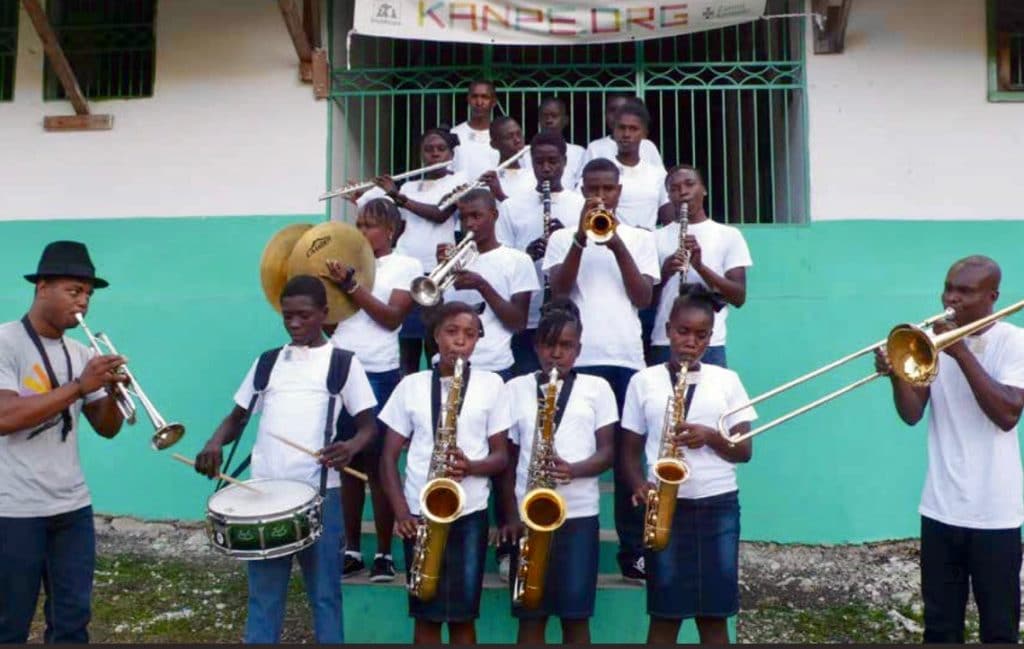 The positive effects of the band are felt at many levels: leadership, community life, and even economically, as some band members have even been contracted as professional musicians by neighbouring communities. Every year, the band performs during Haitian national holidays and other festivals and local events.

Régine says they even started playing at funerals and earning some money, enabling them to buy uniforms. “They create songs about their experiences, their town … and even about Montreal, Canada! By taking control of the future of their marching band, these young people have taken up the torch of KANPE’s autonomy mission and lit their own.”

The impact is particularly visible among adolescent girls, often plagued by early pregnancies during their schooling. These young female musicians are practicing their harmonies, caring for their uniforms and taking part in group decisions. 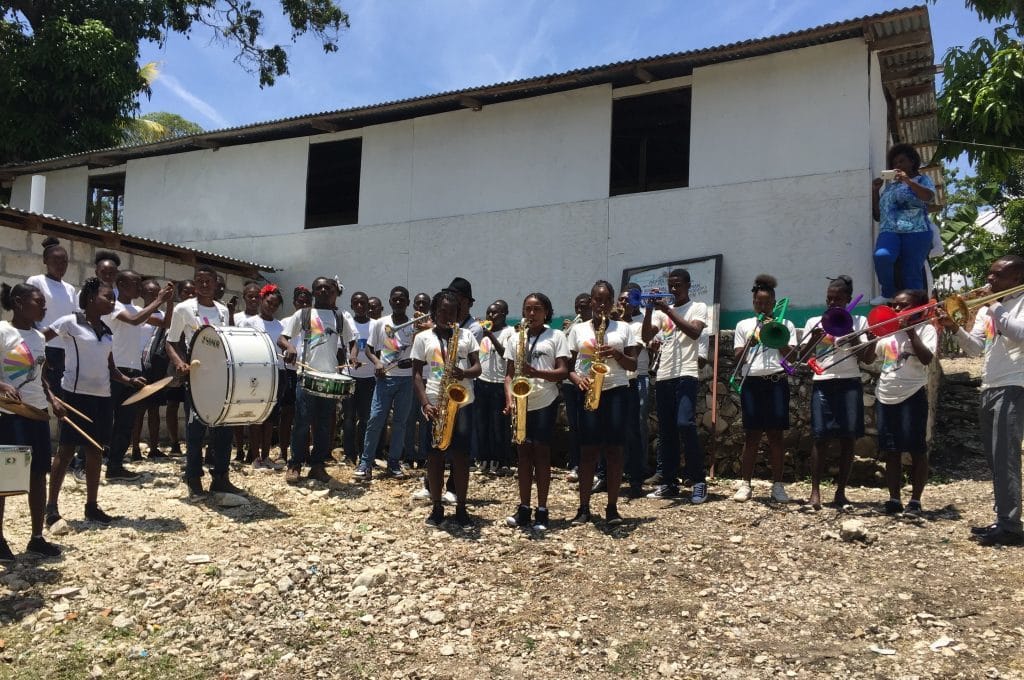 As the marching band resumed its activities at the end of the difficult summer of 2020 due to the COVID-19 pandemic, young people are starting to play their favourite instruments again after the implementation of a rigorous security protocol. The KANPE Foundation’s Executive Director Isabelle Thibault told us that the youth of the band will continue to get involved in their community and expand their economic activities, especially in the agricultural field by raising goats.

“The first objective is to make the band completely self-sufficient by generating enough income to finance their costumes and other accessories useful for the running of the band,” she says. “In the long term, KANPE will continue to support them to work towards youth empowerment and equip them to become entrepreneurs and serve as leaders and models in their communities.” 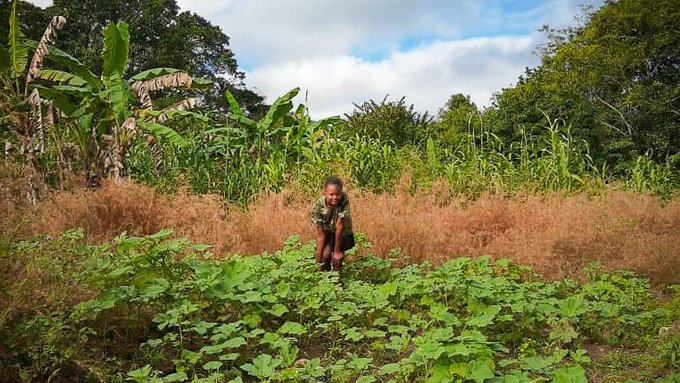 In 2020 KANPE was particularly proud to have launched an experimental farm to serve as an economic lever for the financing of small community projects by raising awareness among the local population about the harmful consequences of deforestation; educating people by involving them in seedling production initiatives and reforestation activities; and training farmers on soil protection techniques, compost production and seasonal agricultural products, and more.

“The project, carried out according to the principles of the circular economy, will make it possible to use the farm’s products as food, inputs and compost, while being produced, sold and consumed locally by the community.” 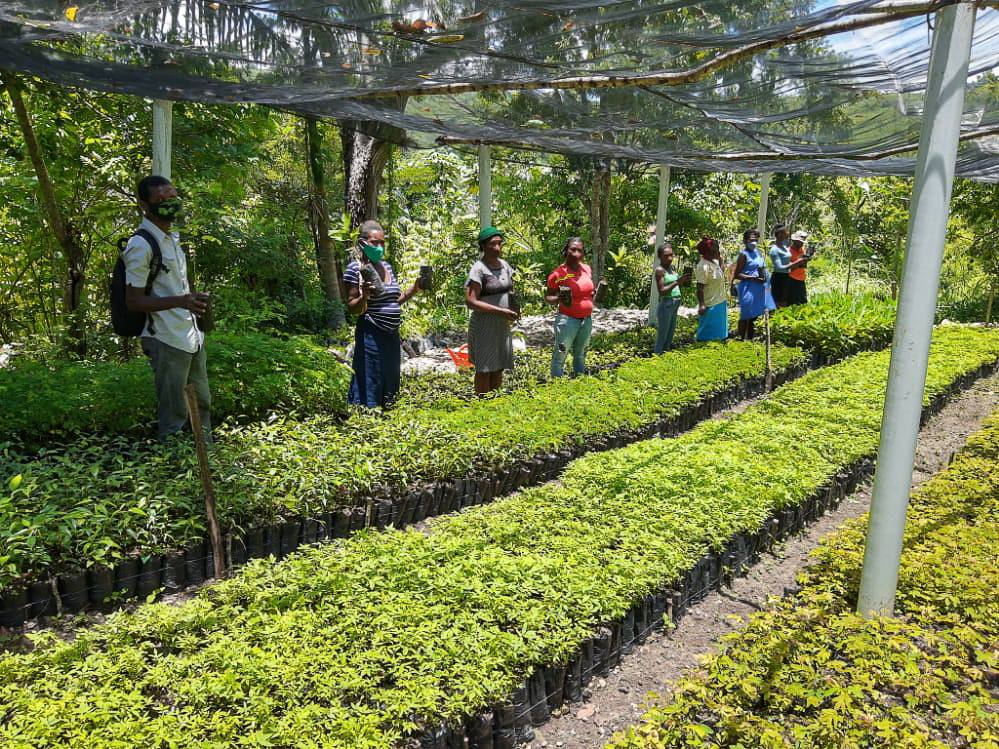 Isabelle adds that KANPE is proud to have been able to use the pandemic as a lever to accelerate their projects to fight food insecurity. “Unable to play during the first moments of the pandemic, the young members of the band put their energy and time at the service of food security projects. We were quickly able to set up a subsistence gardens project for 500 of the community’s more vulnerable families.”

In 2021, the band plan to keep playing, marching on to help slow the exodus of young people from rural areas and giving members a reason to stay on to become role models for the youngest members of the community.

AtlasAction: You can donate to KANPE, get involved by becoming a KANPE ambassador or  volunteer. This playlist created by KANPE board member Martine St-Victor is a fun way to start getting into Haitian music.

By working directly with Bedouin communities, a wild approach to sustainable tourism in Jordan is creating a real impact on...
See more 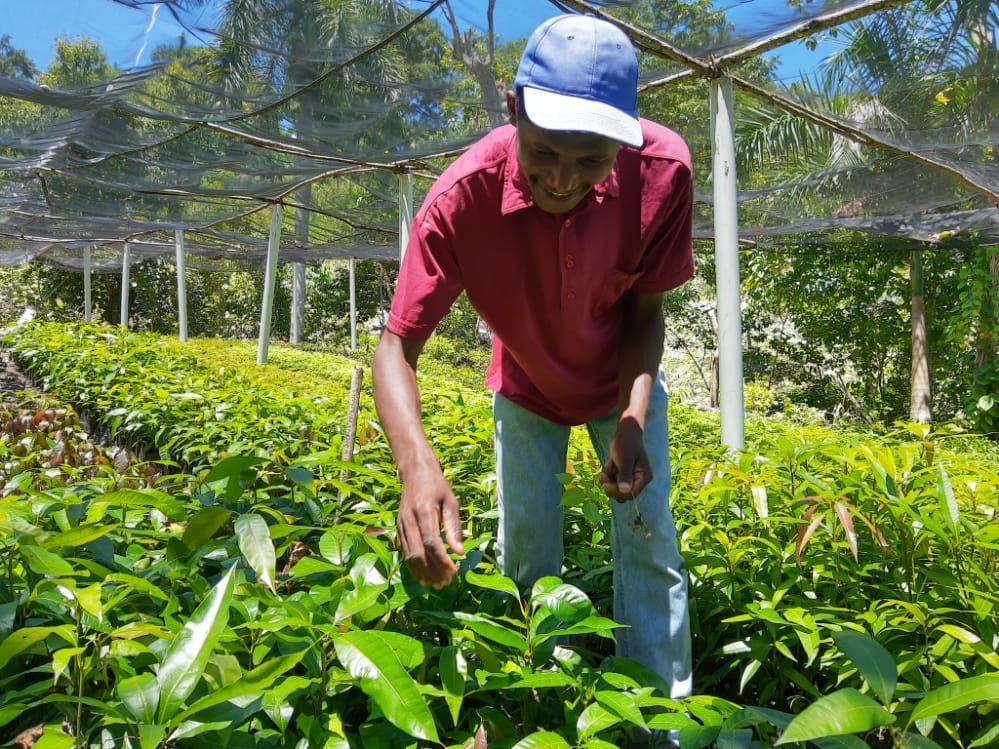 By working directly with Bedouin communities, a wild approach to sustainable tourism in Jordan is creating a real impact on...
See more