“Art need not be fiddling while the world burns. Art can link with science and the full power of human communication to tackle climate change. This way, we can look our children and grandchildren in the eye and say we did our best.” Paul Miskin

Insectopolis is a street theatre initiative that is bringing (friendly) swarms of human-sized bees and butterflies to an urban area near you. In co-founder Paul Miskin’s words, their goal is to use science, art, games, and community action to “artistically boost climate action and regenerate the insect population”.

Insectopolis is not Paul’s first roadshow: his theatre troupe, Neighbourhood Watch Stilts International (NWSI) has performed their street theatre in 39 countries worldwide since 1993 But it was only two years ago that Paul’s focus became the insect extinction. He became convinced that it was time to cut through the scientific jargon and get people buzzing about biodiversity and insect conservation. As Paul reasons:

“The biodiversity crisis is a better point of engagement for everyday people than global warming because there is so much we CAN do and this prevents paralysis and engenders a feeling of empowerment.” 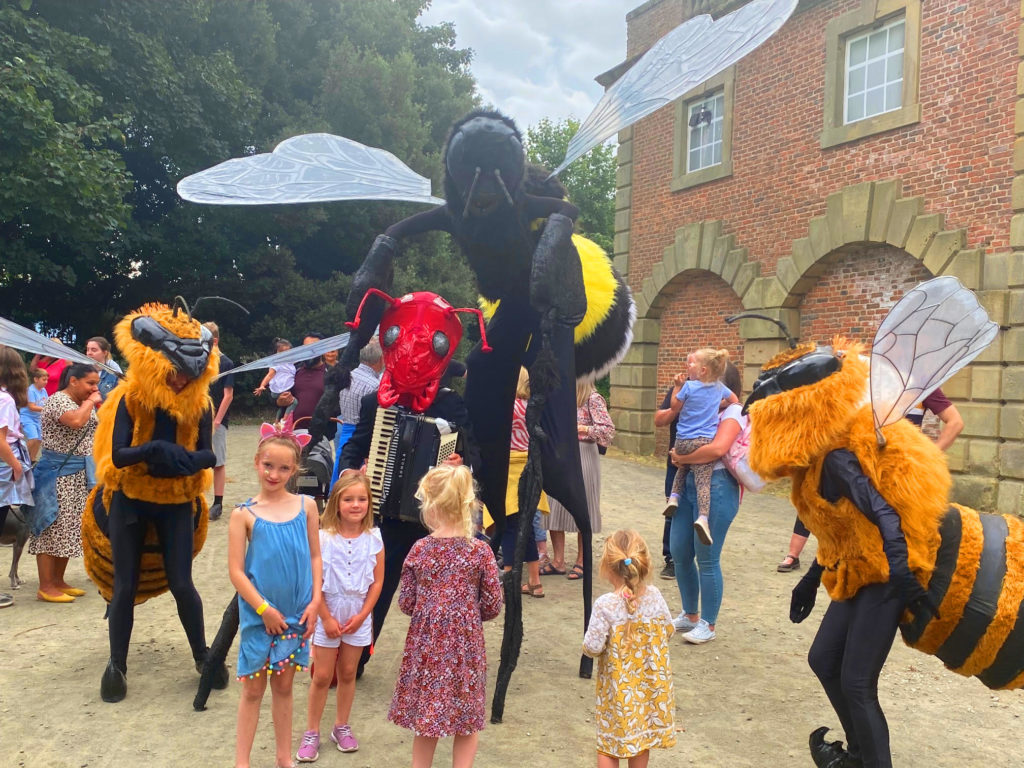 Lord of the flies… or the bees? Insectopolis swarms the Festival of Thrift, Kirkleathham, UK, September 2021.

With the support of the Arts Council of England, the UK National Lottery Community Fund and the Royal Entomological Society, Insectopolis was thus born, acting as “a turbo booster for scientific communication” that uses active audience participation and emotional engagement to create what Paul calls “eureka moments.” From highlighting that insects’ pollination, crop pest control, water cleaning, and waste disposal underpins human survival, to educating the public about the impact on insects of ALAN (artificial light at night), Insectopolis aims to inspire everyone – from young children to local councillors – to “get positive about insects” and act now to prevent their decline.

Raising the visibility of insects (quite literally) on the streets and public gardens of UK towns, and through Science and Art Festivals, Insectopolis is not only increasing awareness about the global insect extinction: it’s actively saving them at the same time. Aligned with Greta Thunberg’s call for an end to all the “blah, blah, blah”, their shows go beyond performance, incorporating games, community-building and land-care. As Paul points out “If you’re doing a show about insects, you have to do something for them too”. Thus, every performance they organise involves planting to leave a legacy of pollinator-friendly flowers behind. And by going through the process of getting permission to plant in the public areas where they perform, Insectopolis are actually opening up green spaces to become pollinator-friendly zones, one bureaucratic application at a time. 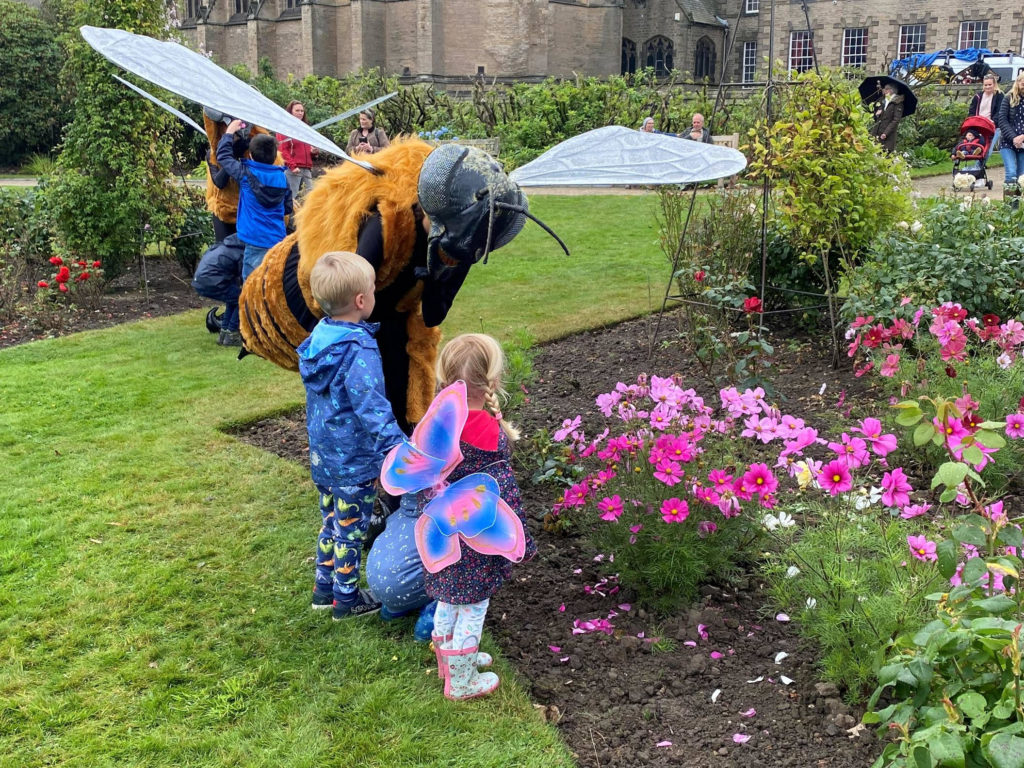 In doing so, Paul and his team are not just trailblazing a mindset change around environmental stewardship, encouraging the rewilding of tidy gardens that look pretty but are often hostile places for bugs. They are actually enacting what they call the “scruffination” of our public spaces to make way for nature to thrive. “Instead of marvelling at our chemically controlled billiard table lawns, we now find pleasure in seeing the dead twigs and long grass and encountering bees, birds and hedgehogs,” Paul emphasises.

Planting a few seeds may seem like child’s play – but it could be the difference between insect survival or extinction. Drawing on scientific research by Nick Tew, Paul is keen to relay that “cities are now the best place for many insects as their habitat is less fragmented than in the countryside”. In this sense, encouraging people in cities and towns to plant in their gardens, and on window ledges and balconies, alongside changing the products they use, could “make a really important difference” in an era where biodiversity loss is endemic and 40% of all insects are declining, with a third now endangered. 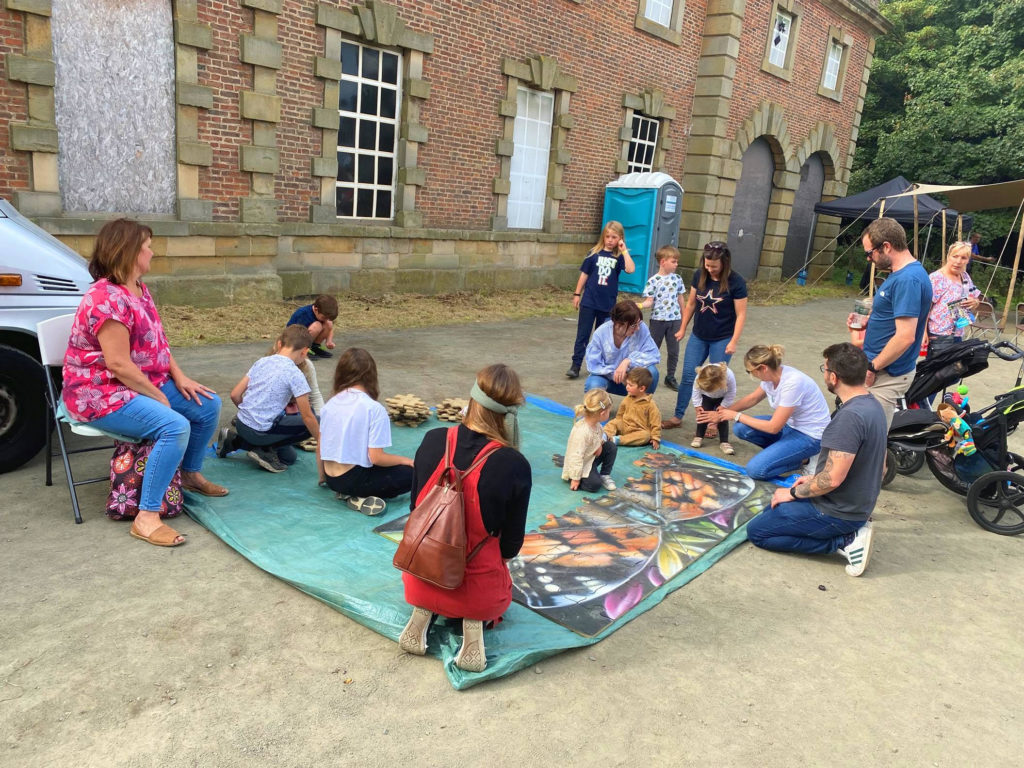 Combining awareness-raising with practical guidance on everyday insect-saving actions, Paul and his troupe hope their events can eventually inspire people to shift beyond the personal and move towards political action. The use of pesticides or harsh insect-killing chemicals and ALAN is widespread in the UK and may seem difficult to conquer at scale. But Insectopolis highlight that it can easily be solved by more organic farming, rewilding, and the replacement of broad spectrum LED lighting with warm, unidirectional or motion sensor light bulbs. For politicians to be able to tackle these issues dynamically, “they need the support of everyday people”, as Paul highlights. So beyond planting, Insectopolis also encourage their audience to start petitions, write to their MP, and vote with their feet.

What’s up next for Insectopolis? The project is developing a new foundation PASA (Planet Action Street Arts) to create opportunities for other artists wishing to use and champion what they term the “eco/action/art/science community fusion approach” and is planning an Art and Biodiversity Festival in 2022. Currently based in the North of England, the theatre troupe also hopes to develop collaborations with theatre organisations in other UK regions and, eventually, other countries in the future.

AtlasAction: invest in some pollinator-friendly plants for your garden, window-sill or balcony; write to your local politician or start a petition about insect decline; and get in touch with Insectopolis if you’d like to collaborate with them or organise some insect-saving street theatre in your locality.

Can you imagine a world where affordable housing would be defined according to average income, not market forces? Where neighbourhoods...
See more
Share this project

Can you imagine a world where affordable housing would be defined according to average income, not market forces? Where neighbourhoods...
See more