What if buying and selling clothes was illegal? How about a world where synthetic dyes were banned? Or doing laundry felt like going down the pub?

These imaginary worlds are what Amy Twigger Holroyd, Associate Professor of Fashion and Sustainability in the Nottingham School of Art & Design at Nottingham Trent University, calls Fashion Fictions. They are the foundation of a research project inviting people to imagine new possibilities for what fashion systems and cultures could – and probably should – look like.

The way we buy and wear clothes is so well established, and the fashion industry so powerful, that it’s easy for our brains to hit a stumbling block when we think about ways to meaningfully change it. As Amy puts it: “The baggage and assumptions of where we are now don’t give you very far to go.” 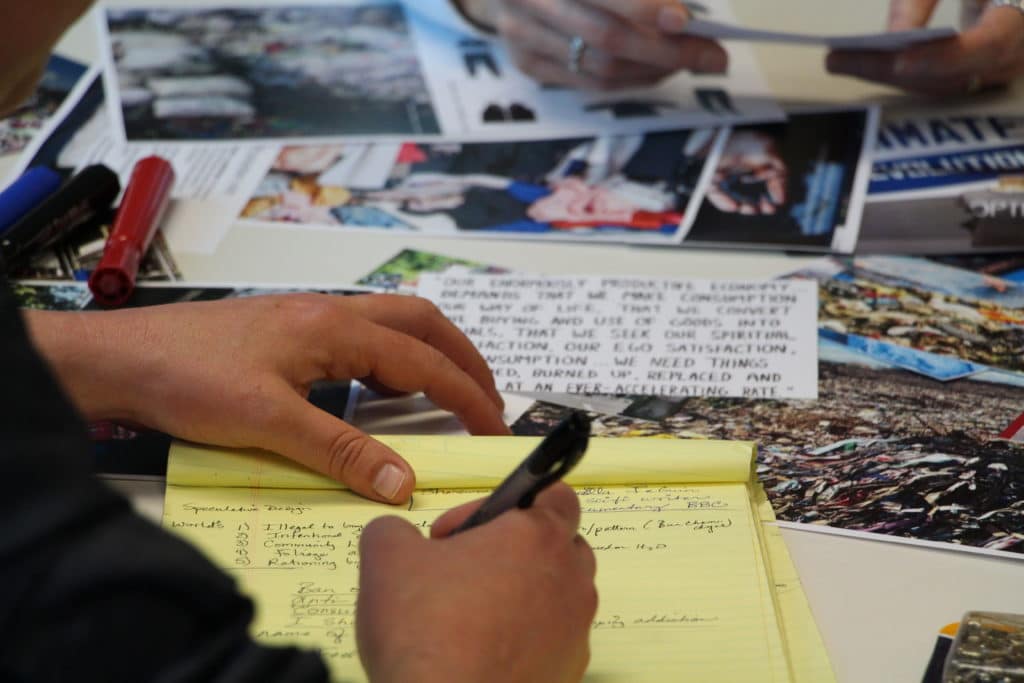 Working collaboratively to investigate life in a world where clothes cannot be bought or sold. Photograph: Amy Twigger Holroyd.

To encourage ideas that could create more than just incremental change, she decided to create a space where anything could be possible. “There was a need for a way of thinking that asked, ‘if we’re going to do things totally differently, what could we do?’ And let’s not worry about how we get there – at least for now.”

So Amy got a group of colleagues together to ask just that. Taking an approach that could be considered a kind of backwards butterfly effect, they imagined what a different modern day world for clothes could be, then traced its roots back through time to an imagined historical juncture where the imagined world ‘split off’ from the real one.

Since 2020, Amy has run workshops in person and online with students, academics, fashion industry experts and members of the public. The Fashion Fictions website now displays more than 150 worlds imagined by people from across the globe.

In this fashion multiverse is a world where the end of the internet leads fashion brands to sell clothes via teletext; another where Caroline Lucas becomes prime minister and ​​inspires a generation to launch a mushroom-themed Mardi Gras; and one in which an abundance of city dwelling sheep become a source of wool for hyperlocal fashion styles. 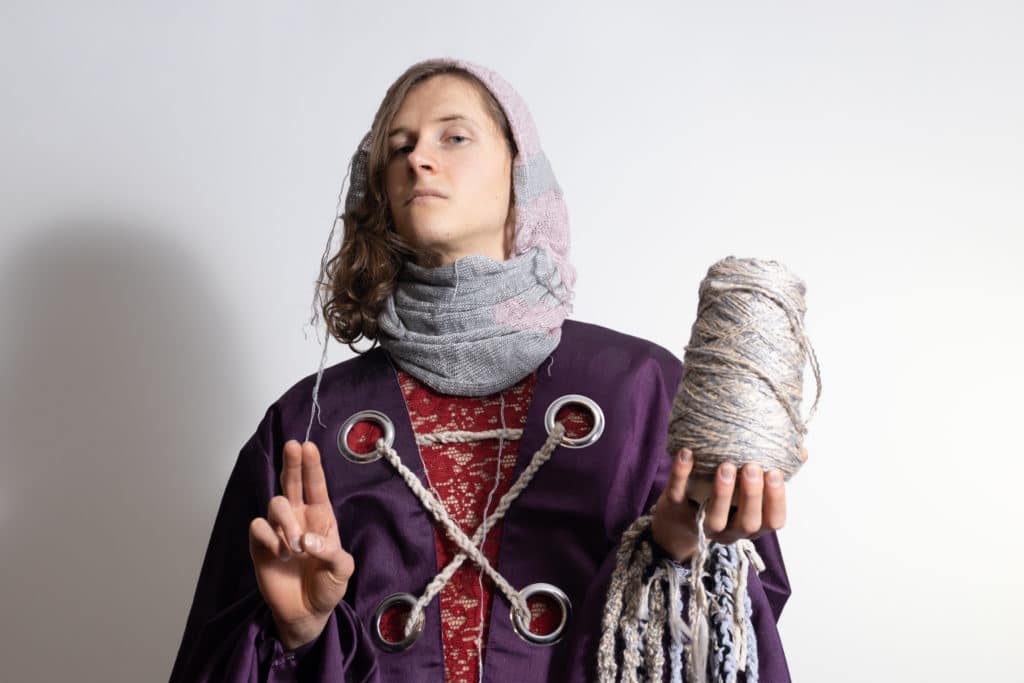 A promotional fashion image created to represent a world where adults can own only ten items of clothing. Prototype by Gillian Allsopp, Kate Harper, Johnny O’Flynn and a fourth Fashion Fictions contributor, based on a fiction by Wendy Ward. Photograph: Jade Bramley.

“It’s the funny ones that really capture the imagination,” Amy adds. “When I’m writing them, I go with the thing that makes me laugh. I encourage people to do the same – it’s a good sign that you’re going in an unexpected direction.”

While anything is possible in these new frontiers for fashion, the worlds must fit some important criteria: they should be possible parallels, rather than speculative futures; be positive, not dystopian; explore culture rather than technology; look at use, not production; and above all, go beyond what feels possible today.

Imagining worlds is just the first step; the second is to create them. Some workshop participants have turned their worlds into a reality by embarking on Stage 2: prototyping visual and material objects that bring their world to life. For example, for World 111, where clothes are utilitarian and personal style is communicated instead through various forms of body art, students at LASALLE College of the Arts created functional, transparent clothes. And for World 7, in which World War II’s Utility Clothing Scheme continued, expanded and became a source of pride, Nottingham Trent University students created a prototype of ‘Civilian: style and sustainability magazine’. 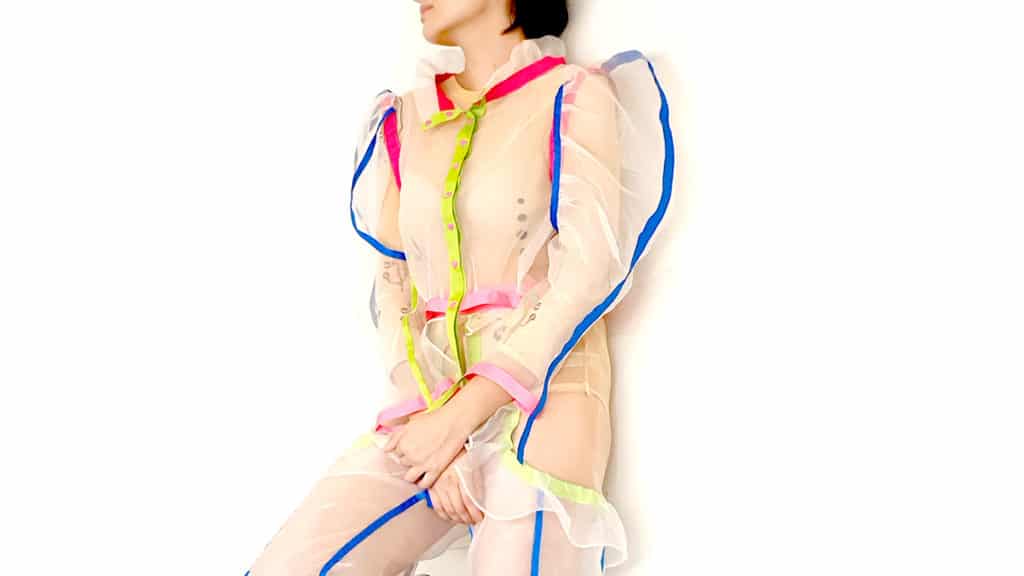 Expressively transparent clothing for World 111, created by students at LASALLE College of the Arts.

Participants have described not only feeling that their minds had been opened to what sustainability could mean, but also, particularly for students, that it has helped relieve some of their worries about the environment. “Students start studying fashion and textiles,” Amy explains, “and quickly realise this is one of the most terrible industries for the planet. If they’re ecologically aware – as they increasingly are – they find themselves in a really difficult place emotionally as well as professionally. But they’ve described this imaginative process as giving them a way through, and alleviating their eco anxiety”.

To really bring their worlds into being, some participants have stepped into Stage 3: living as though their world is real. Amy calls these ‘everyday dress’ projects. One group brought a world where synthetic dyes are banned into everyday life by wearing only undyed or naturally dyed clothes every Thursday for six weeks. 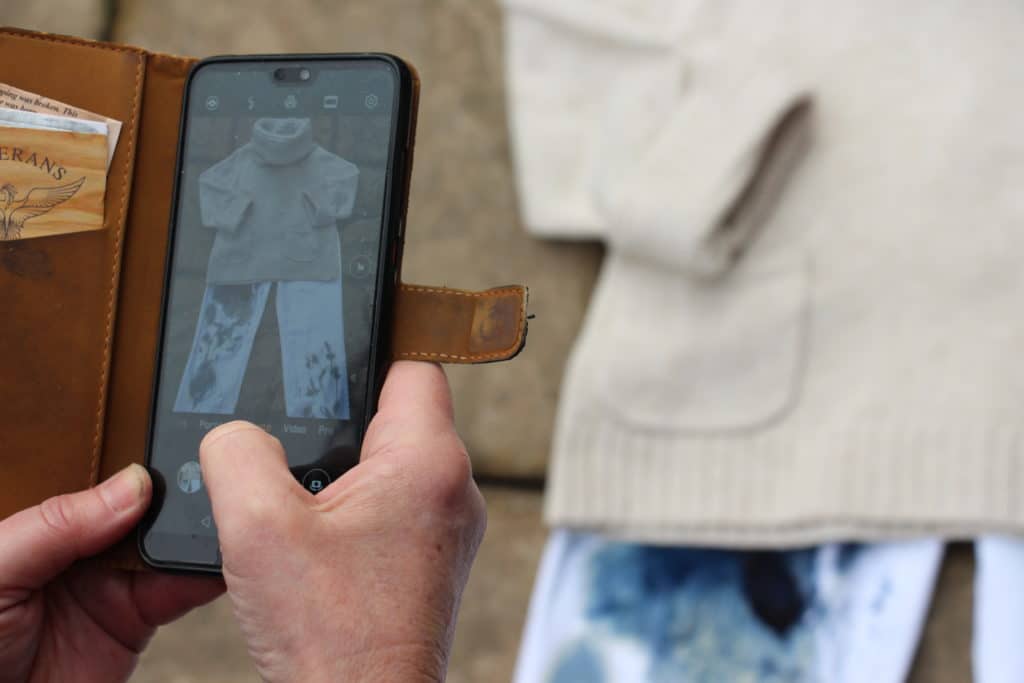 Amy’s focus now is on running workshops that will take worlds into Stages 2 and 3 – so that more people can create, live and breathe these parallel fashion universes. Some ‘everyday dress’ projects will open up so that anyone can participate, and be known as ‘open wardrobe’ projects.

The ultimate goal is, of course, for imagined worlds to work their way into our own. “I would really love some of the invented worlds and practices that we’ve come up with to gather momentum and become a real thing, a thing people want to join in with. That’s the dream – that some of these subversive fashion practices and cultures manage to embed themselves. The best thing would be if I never knew most of the impact, because it was hidden away everywhere in people’s friendship groups, wardrobes, homes.” 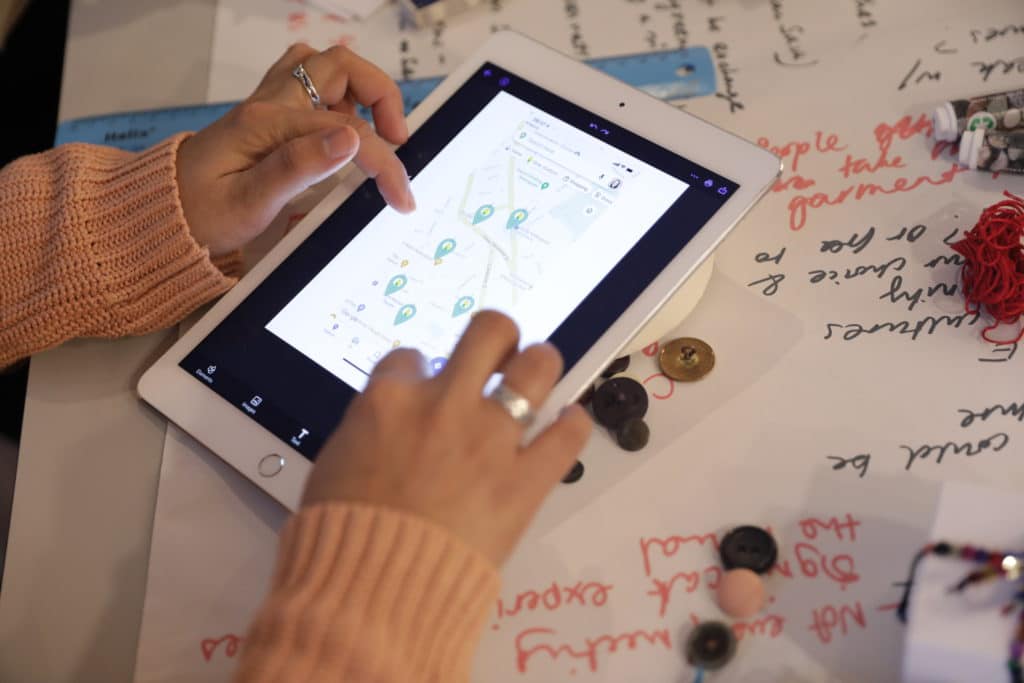 In World 50, people stitch signatures in one another’s clothes as a sign of social connection. This reimagined version of Google Maps highlights ’sew stations’, where people can make use of sewing tools for this significant act. Prototype by Ruhee Das Chowdhury, Leah Das and Tamar Millen, based on a fiction by Matthew Crowley. Photograph: Sanket Haribhau Nikam.

And of course, the very act of imagining can spark new ways of thinking that exist beyond the workshops – beyond even the fashion industry. “It’s not really about what you imagine,” Amy says, “it’s about the process of imagining. That opening up, that sense of possibility. It raises people’s consciousnesses, to really question things. That’s what can lead people to behave differently, because it gives them the motivation and desire.”

This is how imagined fictions can most powerfully contribute to the post-growth fashion movement’s shift towards wearing clothes that fully acknowledge the Earth’s capacity to support life. Dreaming is the first step towards doing.

AtlasAction: Put on your imagining hat and use the guidelines to create and submit a world, or find out more about joining Amy for a Fashion Fictions workshop.

Know of a project that’s transforming the fashion sector? Submit it here, and we’ll spread the joy by mapping it on the Atlas.

Step aboard this technicolour dreamboat

A shoe for every foot

Shoes might not grow on trees – but this one grows itself. The Shoe That Grows has a clever design that...
See more 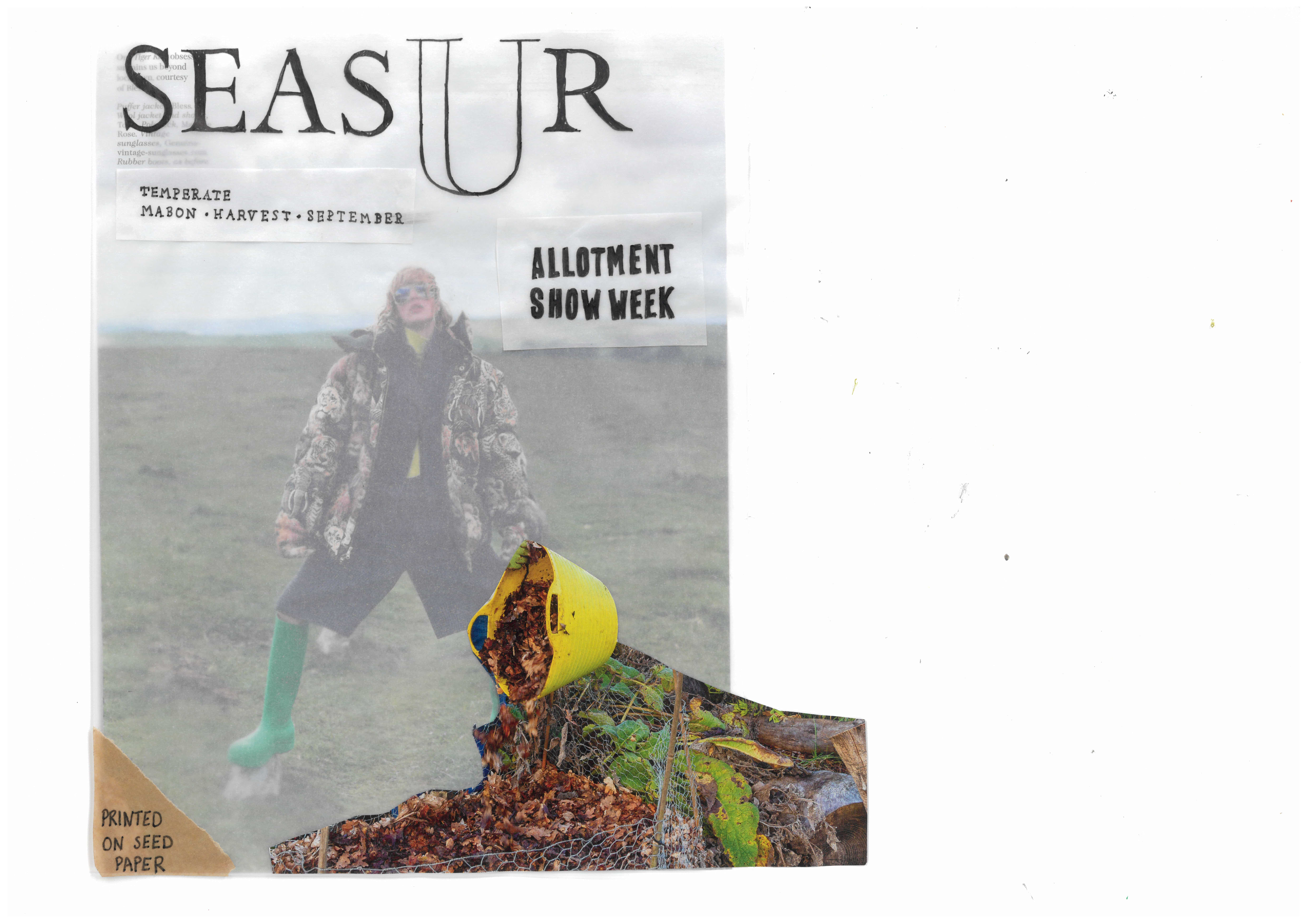 The cover of an imagined magazine, Seasur, from a world where fashion is in the service of nature. Prototype by Jade Lord, based on a fiction by Katherine Pogson. 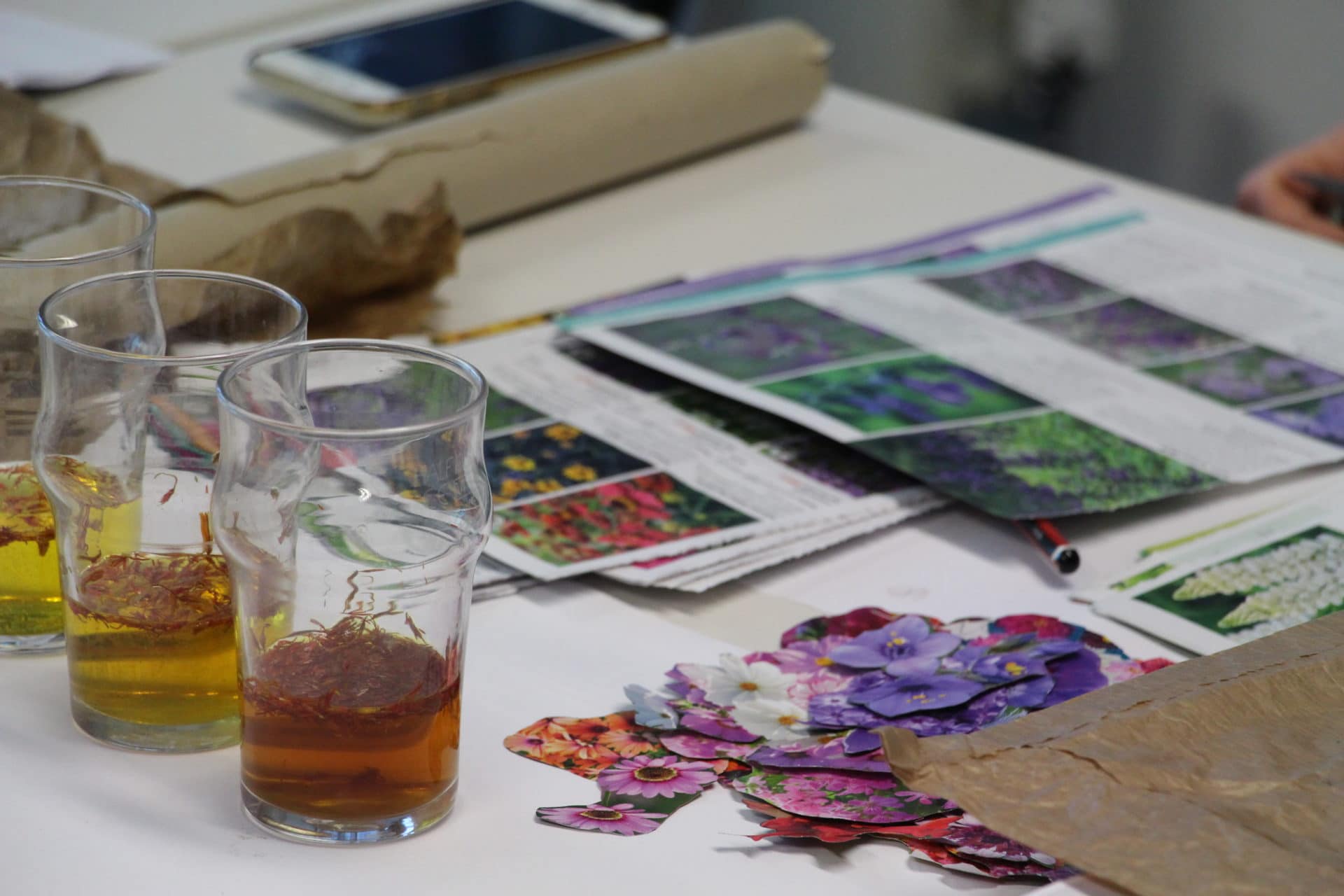 Using the materials of the real world to imagine an alternate reality where synthetic dyes have been banned for fifty years. Photograph: Amy Twigger Holroyd.

Step aboard this technicolour dreamboat

A shoe for every foot

Shoes might not grow on trees – but this one grows itself. The Shoe That Grows has a clever design that...
See more