Imagine being able to grow and make almost anything. Well, you can.

That’s what this ‘Fab’ global initiative is all about – a creative team of pioneers and makers who want to change everything. And they’re doing it more than one city at a time.

Today more people live in cities and metropolitan areas than not, so it’s about time they became more environmentally sound. Fab City aims to build a more sustainable and inhabitable new world – collectively – through opening public digital fabrication makerspaces in the hearts of cities, towns and villages. The idea is to be able to provide citizens with all the resources they need without compromising the planet’s ecosystems.

As founding member and instigator, Barcelona and Bali-based Tomás Diez is passionate about changing the way cities consume and produce resources – like energy, food, water, information and products – to create a ‘DIY’ urban future that is accessible, inclusive and as open source as possible. “I come from a country that imports more than 76% of the resources that it consumes, and that has an economy based on oil, which is 96% of exports. That country is Venezuela, and it is the antithesis of what Fab City is trying to build.”

“Today thousands of people are making the transition from an ‘extractive’ economy to a ‘generative’ one, by giving communities access to the means of production. This sounds communist, but it is far from any previous dogma ever invented by any human.”

Fab City started in 2014 by establishing the idea of a 40-year road map that would start in Barcelona. The city’s Mayor challenged other leaders of the world to develop a new urban model: cities that produce everything they consume locally, while sharing knowledge globally.

Home to one of the leading laboratories of the worldwide Fab Labs network, over the last decade, Fab Lab Barcelona has helped people around the world to locally conceptualise, design, develop and manufacture – with a focus on truly world-changing technologies. Based in the Institute for Advanced Architecture of Catalonia (IAAC), the centre combines innovation, participation, digital manufacturing, technology and creation.

Fab Labs began as an outreach programme at MIT’s Centre for Bits and Atoms and has since become a global network. Ten years ago there were ten labs worldwide, and today there are 1,300 – and counting – from Bolivia to Ethiopia. Using digital fabrication as the main focus, it promotes the idea of distributed manufacturing. Designs can be sent to the other side of the planet, and using CNC machines, laser cutters, 3D printers and other simple tools, users can create nearly any object, big or small.

Fab Labs and makerspaces are not just about tech, but also our cultural change from passive consumers of content and products to creators and makers. “This good might not always be obvious, as the world today can look like a bad Hollywood movie,” Tomás adds, “but the truth is that there are more and more people engaged in changing things – by taking a constructive role and contributing their time and knowledge. We have to understand that we are catalysts of this change.”

Tomás stresses that it’s important to know that there is no one single founder of Fab City. “This is not based on individual heroism, but a global collaboration.” Together, Fab Lab Barcelona, IAAC, MIT’s CBA and the Fab Foundation are assembling whole productive ecosystems in neighbourhoods, so that inhabitants worldwide can share knowledge – solving problems with local materials and expertise, setting up new businesses and education schemes, and transforming us from consumers to producers. 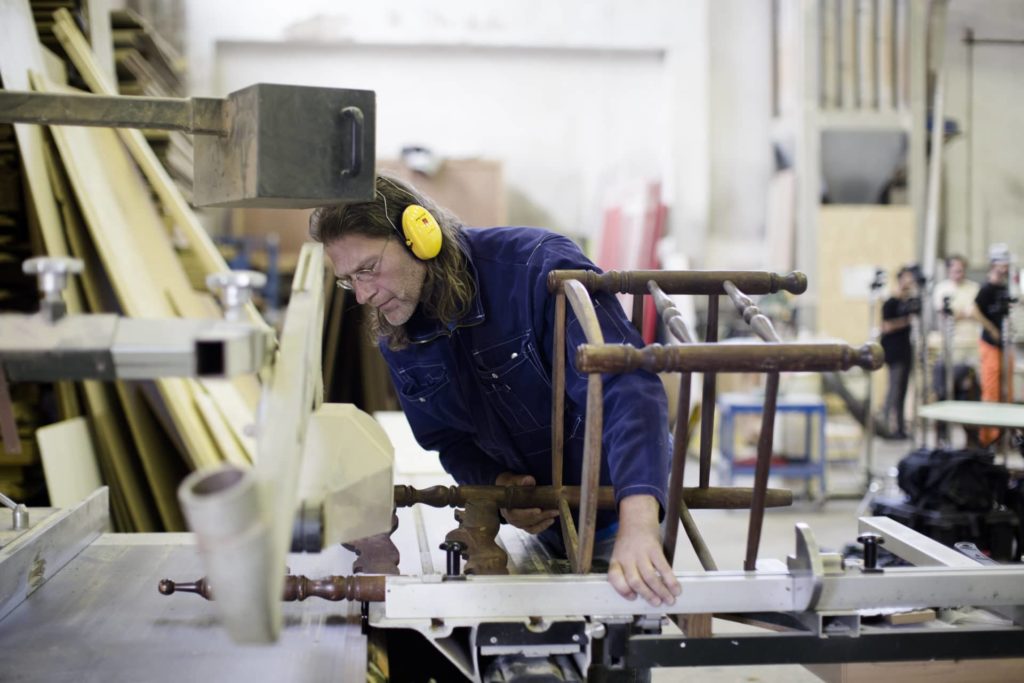 38 cities have now joined the Fab City Global Initiative including Detroit, Shenzhen and Linz – as well as the Kingdom of Bhutan, the only country that has a ‘happiness index’ for their citizens. “There are not only cities joining, but also countries or regions. We imagine smaller towns adopting these principles too.”

“You make your dinner in your kitchen every day with tools,” says Jon Minchin, Coordinator of the magical Green Fab Lab in Valldaura, Catalunya. “In the future you won’t just have a kitchen, but a fabrication room. Scan your foot and a shoe will materialise exactly to your specification. This what we call the ‘Third Industrial Revolution’ – where anywhere can become a factory.” Valldaura is a prototyping and testing site for technologies and interventions that then can be placed in Barcelona and other cities… we like to call it the ‘place beyond the pines’.

In his book The Self-Sufficient City, Barcelona’s ex-Chief Architect Vicente Guallart develops the idea that we are transitioning towards giving the public information and the development of new production tools that will redefine and reshape our reality: “The regeneration of cities following the model of connected self-sufficiency can only be meaningful if people are allowed to have more control over their own lives and more power as members of a social network.” If successful, this could have wider social and economic effects, such as the emergence of a new path out of unemployment.

But how can we tell how close is a city to guaranteeing opportunity, so that citizens can be the masters of their own destiny? In 2017 the Fab Lab launched the Fab City Dashboard, where citizens, civic leaders, digital fabrication laboratories and makers can understand the existing resilience and self-sufficiency of their cities and how they are having an impact on it. Its ‘City Resilience Index’ is based on the wellbeing indexes developed by OECD, using data from the World Bank and fablabs.io.

This project is not only trying to achieve a very ambitious vision, but is making it actionable. At the Fab City Summit in Paris in July 2018, more than 1,000 people from the world’s city governments, industries and innovation ecosystems gathered to launch a new phase – establishing the ‘Fab City Foundation’ to look after and support the mission of the project. It was fully established in January 2020.

They also launched the first book around the project and “the mass distribution of almost everything”, in collaboration with the European Union, United Nations and the Barcelona City Council. It features a call for actions for people and communities to convince their governments to take part of the Fab City Global Network to start making something in their nearest Fab Lab in order to produce change. (Their second book, DESIGN REMIX SHARE REPEAT, was edited by Atlas of the Future founding editor, Lisa Goldapple!)

As was the case with so many people in the maker community and on its periphery, in 2020 the Fab City community found itself embedded in the emergency response to produce personal protection equipment for frontline workers during the first shock of the pandemic. Many stories emerged from the network, including informal bottom-up responses of labs and makerspaces distributing their equipment into the homes of citizens to produce PPE, community centres becoming facilitators for city-wide manufacturing efforts and open designs being shared across borders.

This led to Viral Design, their book in the series, which aims to give shape to the experiences of designers and makers across Europe and throughout the globe during the COVID-19 pandemic. 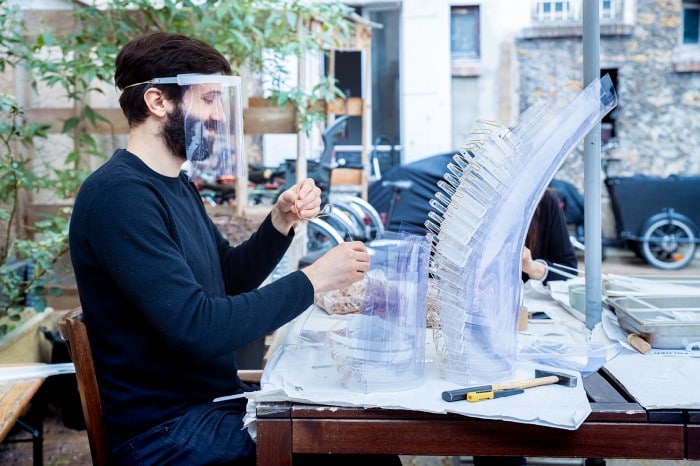 Next, they plan to develop and test the Fab City Full Stack, a strategy for synchronous bottom-up, top-down implementation of Fab City agenda. Tomas is most excited about the possibility of “dismounting the current economic and political model. Let’s see if we are able to do it!”

AtlasAction:  Learn more about the DIY cities of tomorrow and check out this Fab Top 9.

The football stadium made from airplanes

The beautiful game is embracing its green side. In the ultimate upcycle, a global architecture studio is using airplane bodies to...
See more 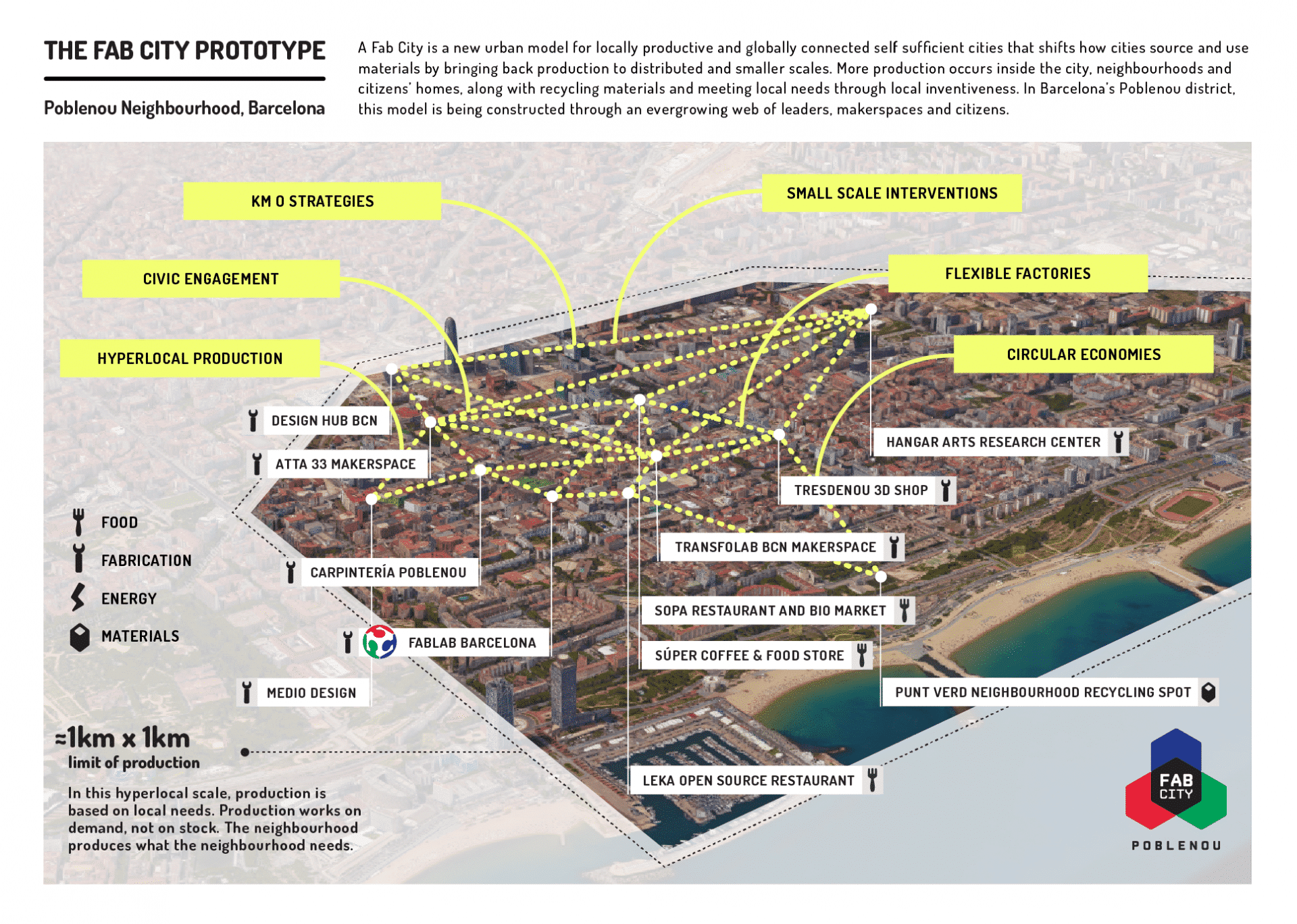 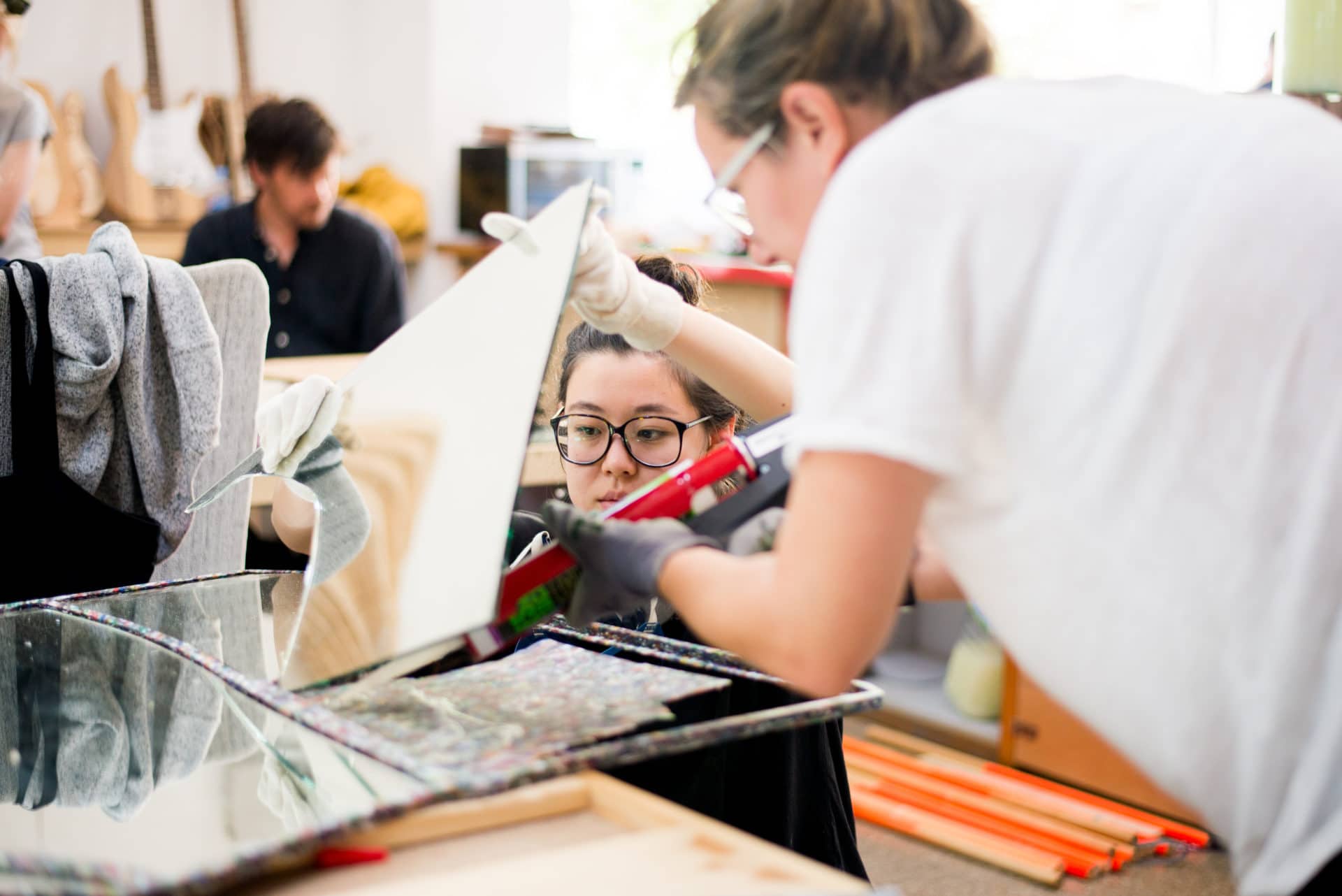 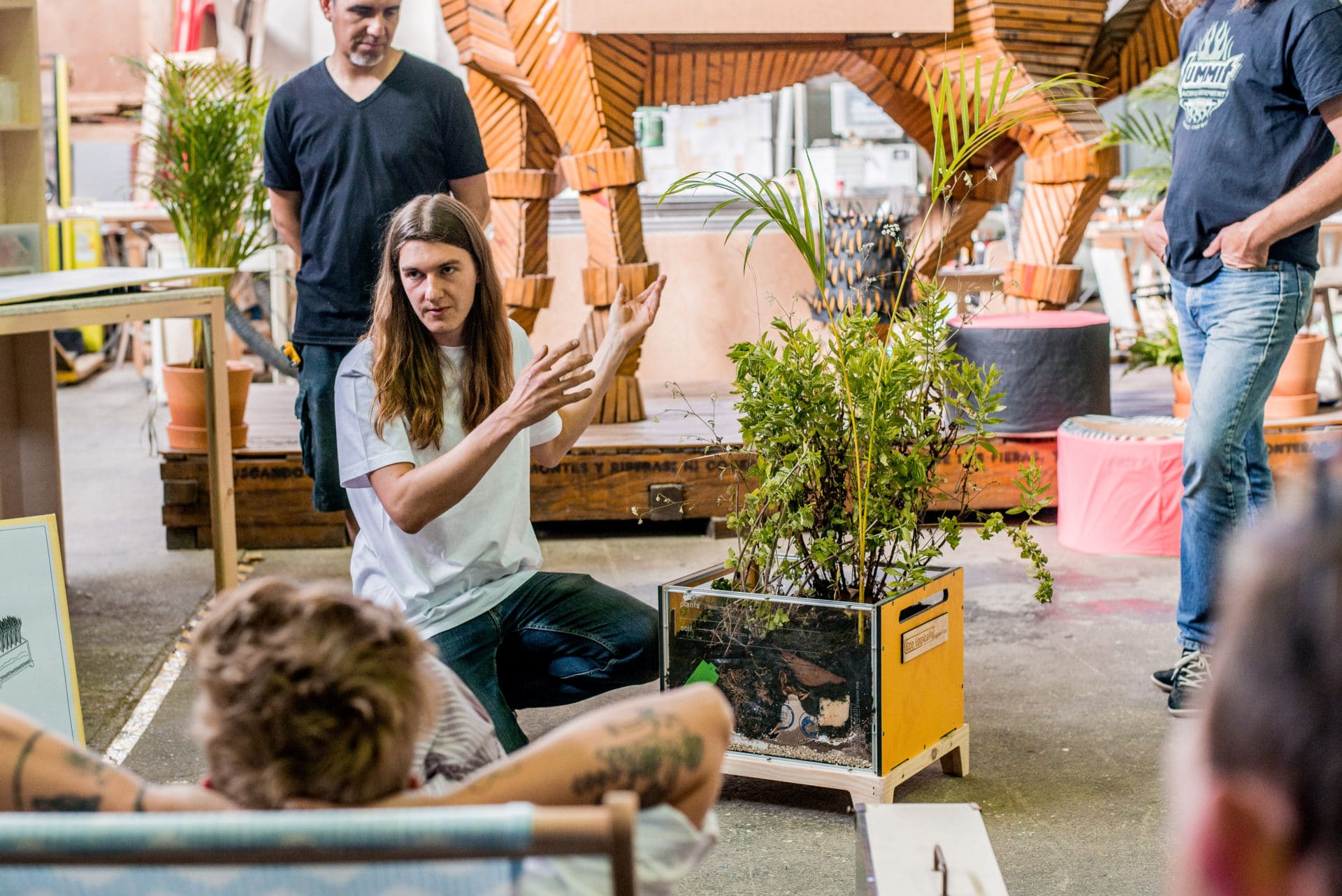 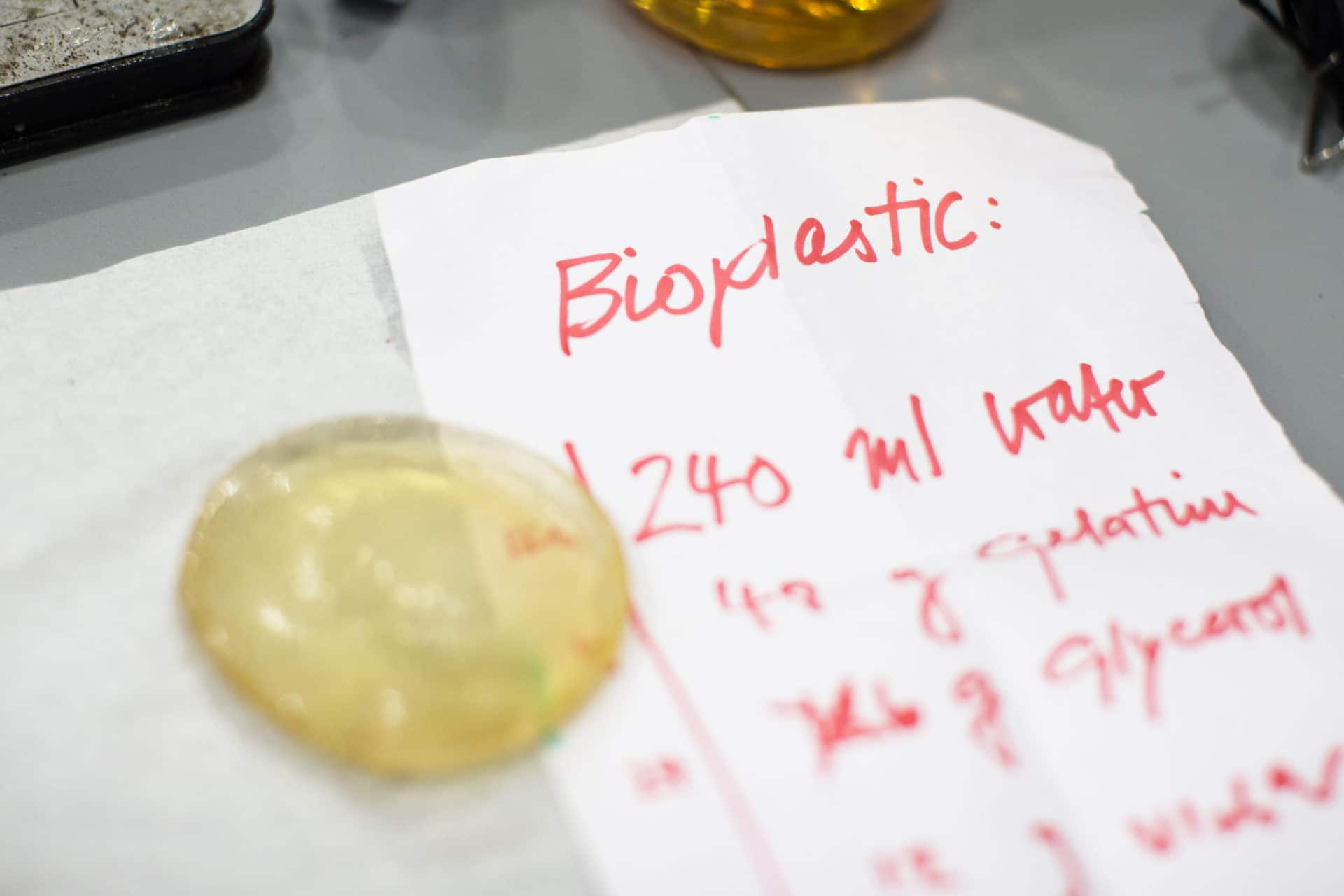 The football stadium made from airplanes

The beautiful game is embracing its green side. In the ultimate upcycle, a global architecture studio is using airplane bodies to...
See more