The beautiful game is embracing its green side. In the ultimate upcycle, a global architecture studio is using airplane bodies to renovate a top football stadium.

Champions of sustainability goals, architectural design studio Populous has mastered the art of the football stadium renovation. Known for creating ingenious retractable pitches that give buildings the flexibility to offset carbon emissions, for their next trick the innovative team of architects is reusing passenger jet airliners in its redesign of the Stade de la Meinau football stadium in Strasbourg, France. 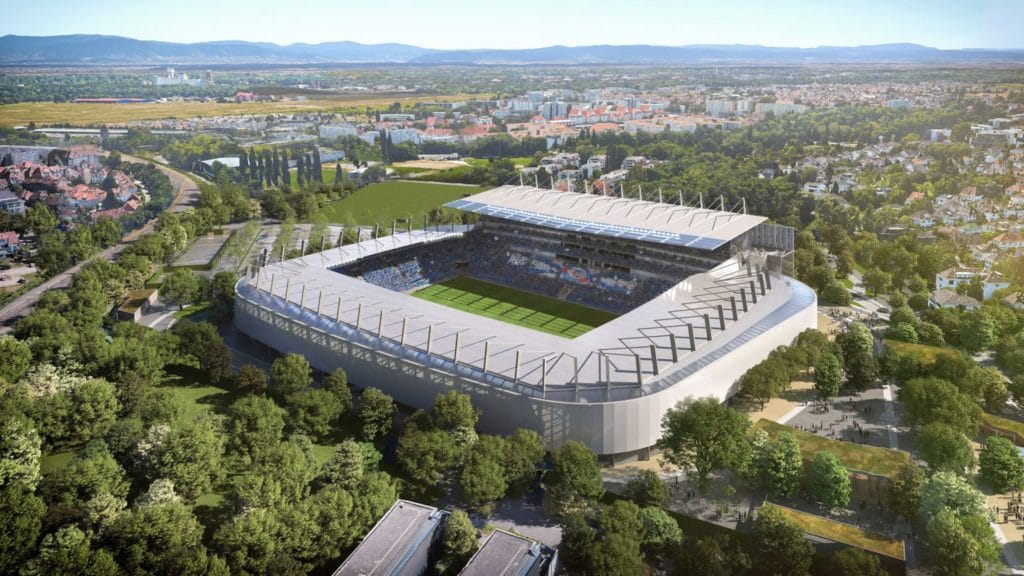 Having already completed the 2012 Olympics Stadium,  the Aviva Stadium in Dublin and the “best stadium in the world” for Tottenham Hotspur – which is designed from the ground up to be an asset to the community and a catalyst for regeneration – now Populous is in charge of revamping ‘Le Meinau’.

“As architects, our job is to create buildings that meet the needs of the people who use them and society as a whole.” – Francois Clement

Opened in 1906, La Meinau is the home ground of French top-tier football team RC de Strasbourg Alsace and is known for hosting the 1938 World Cup, two games of Euro 1984 and the final of the Cup Winners’ Cup in 1988. We spoke to the Senior Principal at Populous, Francois Clement, about tackling sustainability head-on, his designer’s toolbox and what inspired him to reuse the Airbus A340 fuselages.

“When people talk about sustainability, they’re often thinking about renewables and carbon emissions, but sustainability is also about longevity and economics,” Francois explains, “how quickly does a building become outdated and require rebuilding or renovation works, and does it benefit the local community and businesses?” 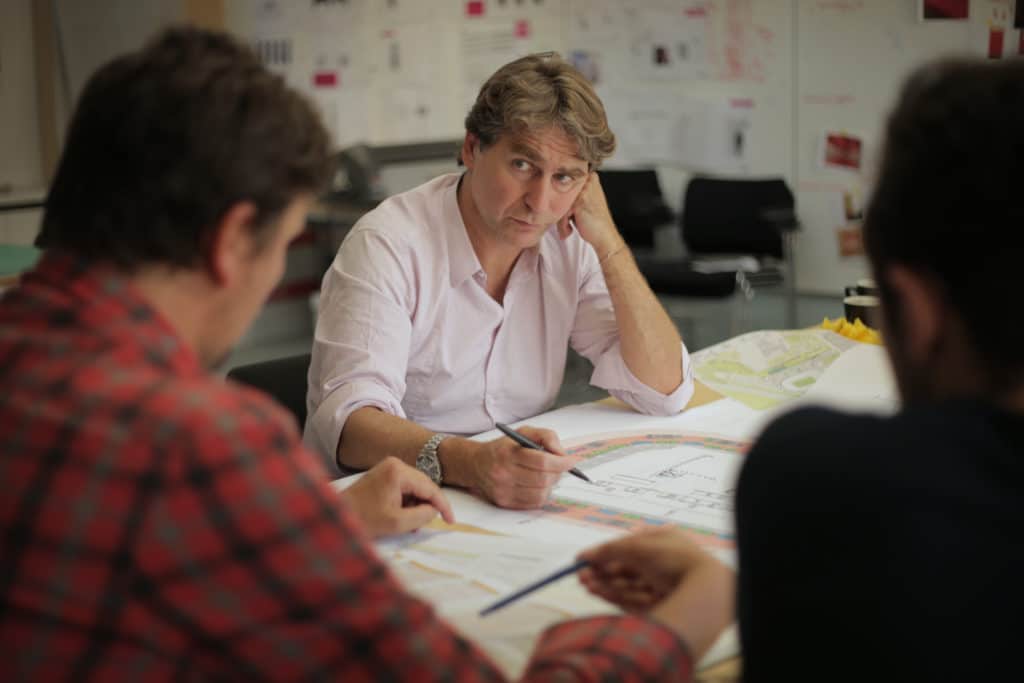 The La Meinau project benefits from all the R&D work Populous have done over the last 25 years, everything the team has learnt about sustainable stadium design and how to put it into practice in a real-world project scenario.

“What I’d like to think we’re doing with the Stade de la Meinau project is setting new markers for innovative environmentally sustainable design solutions within architecture, but also raising the profile of environmental sustainability within the context of a commercial project. We’re showing that profit and sustainability are not mutually exclusive project drivers, and that’s a very compelling message across all business sectors.”

In the case of the Stade de la Meinau project, the Strasbourg municipality (who own the stadium) decided to keep the existing stadium, so Populous adopted a surgical approach to adapting the building and bringing it up to modern standards in a creative way.  There might be some really innovative, attention-grabbing features, like the sunshade made from 30 aircraft fuselages (a world first), but what Francois is most proud of is the holistic approach the team has taken towards sustainable design.

“At the start of every project we have a set of sustainability criteria that we are considering – reducing construction and demolition waste, reducing energy consumption, reducing water consumption, the integration of renewable energy – and then as designers our task is to creatively address these within the unique context of every specific project we undertake,” the architect continues. 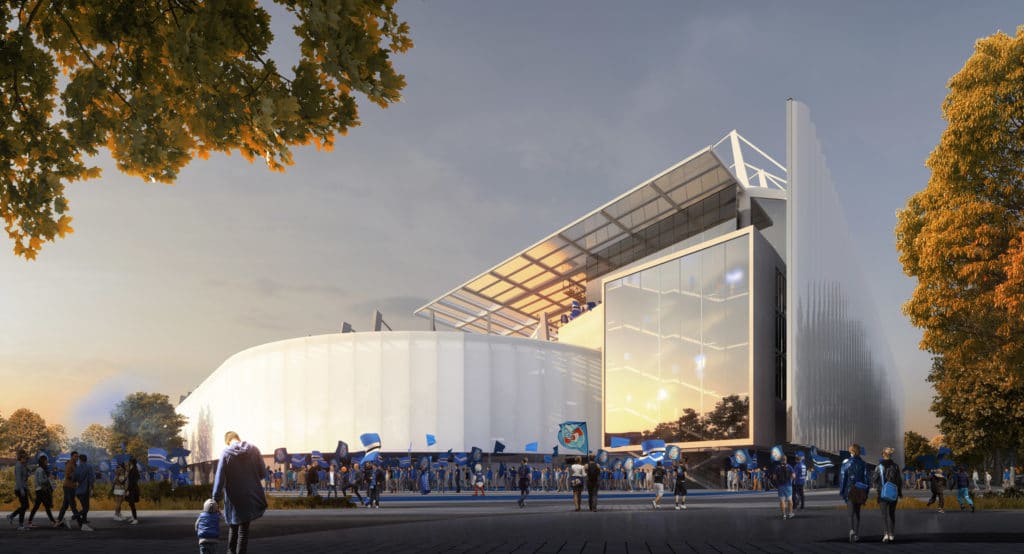 The expanded seating area will increase the stadium’s capacity from 26,282 to 32,000

As for the fuselages, Francois has always been intrigued by the enormous aircraft graveyards in America, “the sculptural and geometric form of these huge machines lined up side by side, in row after row”.

It was always in the back of the architect’s mind to try and incorporate this sort of expression into a project in some way. As they developed the idea, the team realised there was an opportunity to take things one step further and actually upcycle sections of the aircrafts themselves, using products and materials that will not need to be manufactured.

Populous worked with a company called Tarmac Aerosave that specialises in maintenance and recycling aircraft. “They currently provide some materials for use in small-scale boutique furniture making, but this is the first project of its type anywhere in the world where such large parts of the aircraft are being extracted from the recycling process for upcycling. Uniquely for a company of their type, they use a wire saw cutting process to take apart the aircraft, which allows them to optimise the sorting of the different materials for recycling,” Francois explains.

For this project, this meant they could separate out the sections of fuselage in an extremely precise manner, ensuring that the product is supplied at the specified dimensions and without damage. 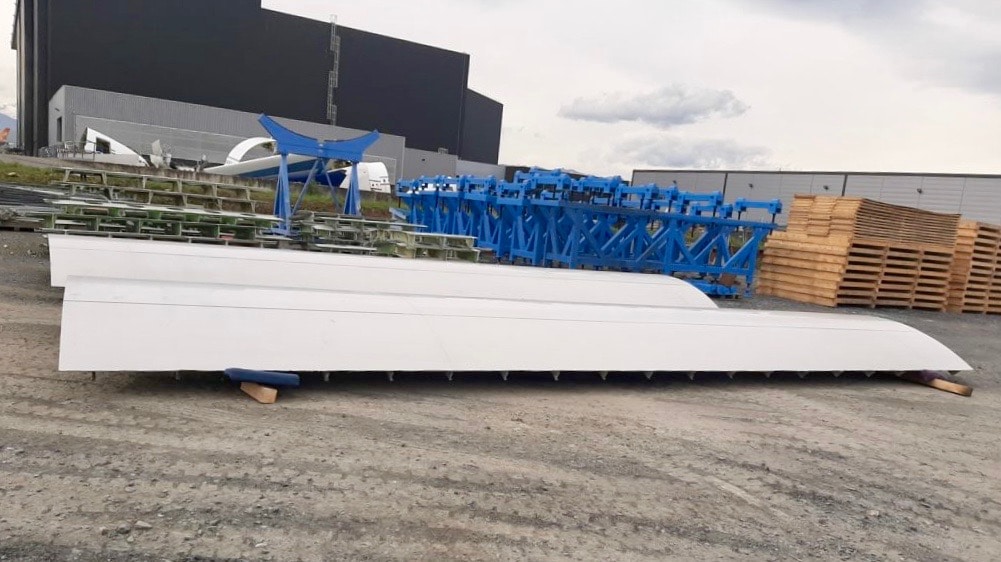 As for the future of architecture, Francois tells us to buckle up because he predicts that in the next five or so years we are about to see sustainability become even more critical to project development than it is now, with a substantial change in the construction methods and materials used to build stadiums to reduce carbon emissions.

“Highly efficient, lightweight robot-printed roof trusses will reduce the weight bearing on a structure, saving on frame and foundation materials. Building materials will absorb CO2,” he tells us. All of these things will change the physical appearance of sustainable architecture. “Technological advancements will reduce energy wastage in stadiums, and ‘smart’ stadiums will form part of smarter cities, with greener transport connections.”

There are already discussions ongoing on how stadiums could integrate with future ‘pod’ transport networks, where the battery power from electric vehicles used to bring fans to the venue could be utilised to help power the stadium during games.

“Design like that might seem futuristic, but as climate change becomes increasingly real for people around the world, we’re going to see a rapid acceleration in the development of innovative solutions to tackle it.”

AtlasAction: Populous designs “the places where people love to be together”. Have a question for the architects? Ask away!

A social enterprise in India is bringing much needed play into children’s lives with low-cost playscapes made from scrap tyres...
See more 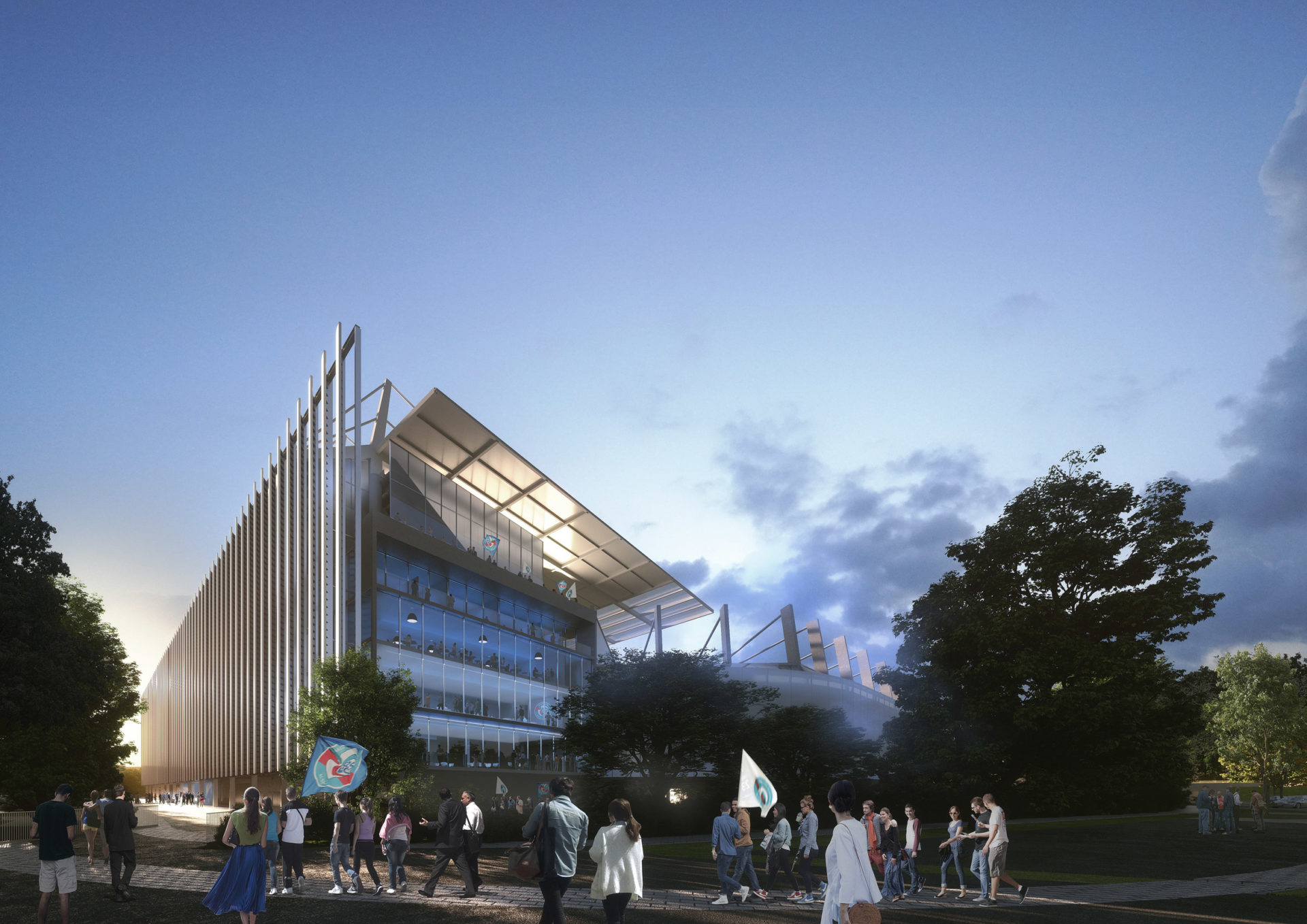 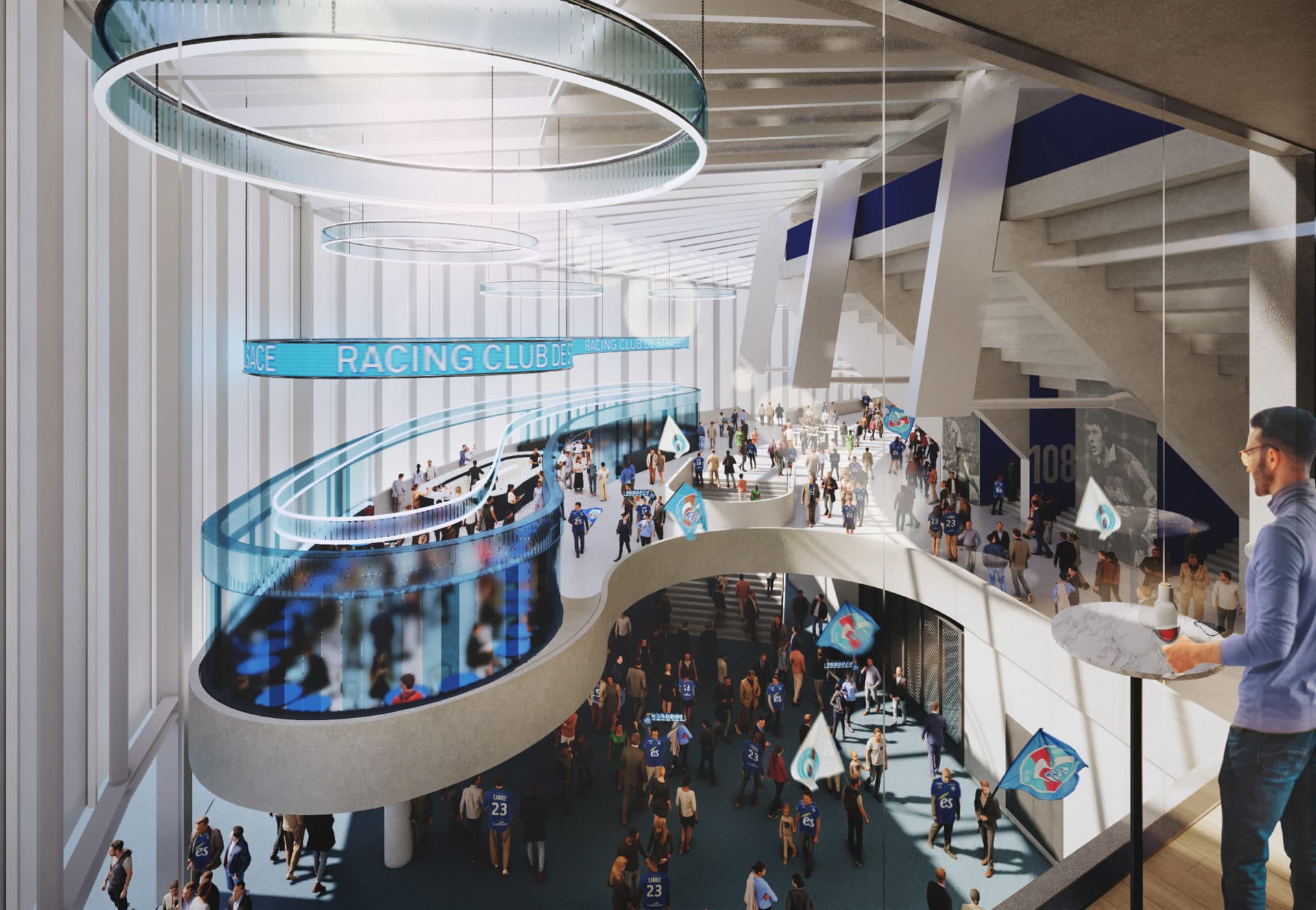 A social enterprise in India is bringing much needed play into children’s lives with low-cost playscapes made from scrap tyres...
See more