The Billion Oyster Project wants to restore New York Harbour’s once famous and flourishing oyster reefs, bringing biodiversity back to the waters while educating a new generation of environmentalists.

Way back in the 1600s, New York Harbour was brimming with biodiversity. Around 220,000 acres of oyster reefs (that’s an area equivalent to about 120,000 football pitches) provided a habitat for hundreds of species including whales, dolphins, seals, and seahorses. Sadly over the last 150 years, over farming and pollution has led to the near-total destruction of oyster reefs, and with it an entire underwater ecosystem.

Launched in 2014 by Pete Malinowski and Murray Fisher, the Billion Oyster Project is on a mission to reclaim the Harbour as a space for biodiversity, aiming to restore 1 billion oysters to the area by 2035.

Which begs the billion dollar question: why oysters? Well, it turns out oysters are experts at engineering biodiverse ecosystems. “Oysters are the same as the grass in a salt marsh, or the trees in a forest, or the coral in a coral reef. They build the ecosystem,” Pete tells us. “We currently have this huge landscape that’s essentially flat and featureless without the oysters there. So we’re restoring the reefs to bring back a three-dimensional habitat, providing a home for hundreds of other species.”

Oysters also do a stellar job of cleaning the water around them. Just one is able to filter up to 50 gallons of water per day. This filtration plays a vital role in removing excess nitrogen and chemical contaminants from the harbour. What’s more, they also extract phytoplankton and algae, allowing sunlight into the water and in turn supporting the growth of seaweed – another essential underwater habitat.

On top of that, oyster reefs have been documented to protect islands and estuaries around the world from extreme weather conditions, Pete says. For one, oysters release a sediment – known as “pseudo feces” (fake poo) – that solidifies and protects the integrity of estuary beds. Their flat shape also absorbs wave energy, reducing their damaging impact on coastlines. “Historically these large reefs calmed the harbour a lot. As our reefs grow they can play a role as part of an integrated solution for rising water levels and more intense storms.” 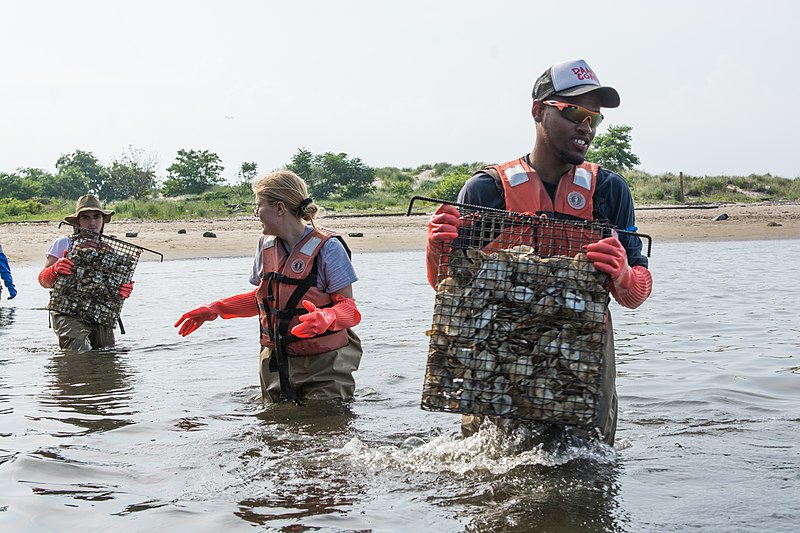 But for the Billion Oyster Project, just as important as underwater oyster reefs is the community living above them. “In New York City you can’t separate humans from the work of restoring the environment. Everything coming in and out of New York City is all about people. So we can restore the oyster reefs, but if the people aren’t engaged in the harbour and thinking about the harbour differently, it’s only going to be a temporary fix. We want everyone to think of it as a place they have access to and ownership over. We want to bring people together at the water’s edge.”

Ultimately the idea is that the communities surrounding the harbour are able to help nurture it, and in return benefit from it as a source of work and play. The focus on community engagement has even prompted the project to update its mission statement: one billion oysters restored, one million people engaged.

But recruiting this many people to restore a local marine ecosystem is no easy feat. The answer? Education. As Pete explains, education is an important tool in understanding and in turn protecting the environment. “It’s sort of a cheesy line, but we say restoration without education is fleeting. If you want to actually improve outcomes for the natural environment, you need the people involved in it to share those goals and be excited about it.”

The Billion Oyster Project currently partners with 100 schools in New York, providing field trips and classroom activities in which more than 6,000 students have participated. They even offer their own ‘Ecosystems Engineers’ curriculum, giving students an education in marine ecology and restoration. The project also works closely with the New York Harbour School, an institution founded by Murray with the aim of bringing students as close as possible to nature. “We started with an aquaculture program growing oysters for restoration, but we quickly realised we also needed scuba divers, boat drivers, engineers and scientists, so all the students in these different programs can work together on restoring oysters to New York Harbour. The Billion Oyster Project then exported that idea to other schools all over the city.” 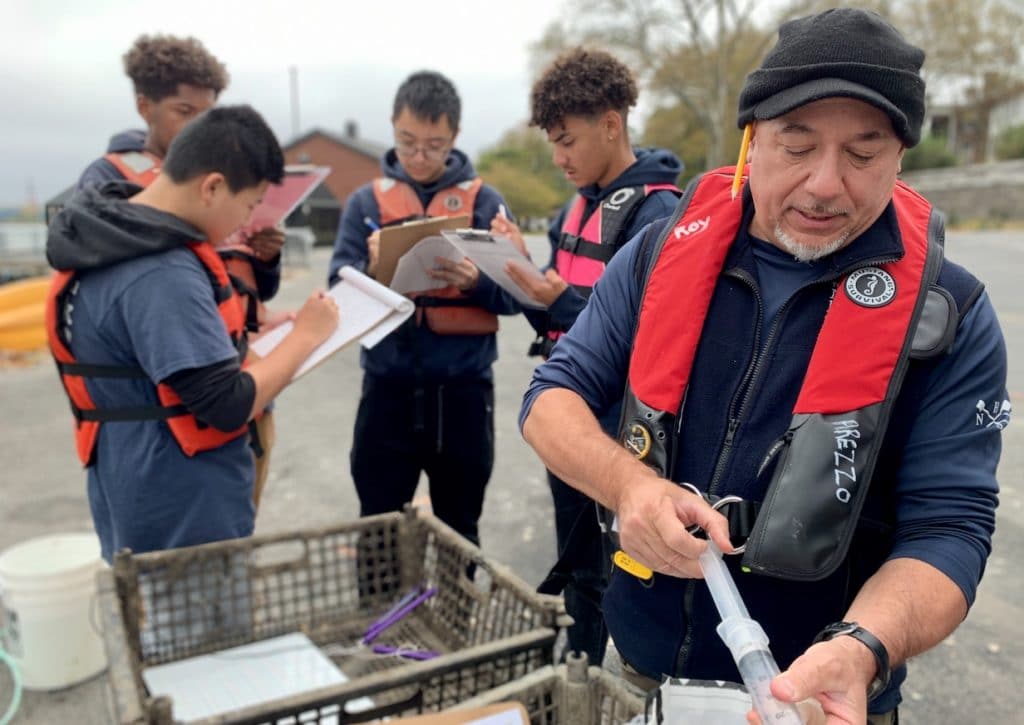 With its growing team of students, community volunteers and marine professionals, the Billion Oyster Project has now restored over 50 million oysters to the New York Harbour. In the next few years, Pete says the aim is to hit 100,000 million oysters restored per year. Together, the crew also carry out vital ecological services, such as testing for water purity and building reef infrastructure. Working with 60 restaurants in New York, they even operate a shell recycling programme, collecting bin-bound seafood shells and reusing them as homes for baby oysters. Over 680,000 kilograms of shells (equivalent to about 60 buses) have now been recycled, and BOP students have even drafted legislation to provide tax relief for participating restaurants.

Of course, the work isn’t without its challenges. Red tape surrounding the New York education system, as well as tough harbour conditions, mean change sometimes comes slowly. Also, many people simply remain unaware of the problem at hand. “If you were to take your family to Central Park in New York and the gates were closed because it was full of trash and sewage, no one would stand for it. Meanwhile that happens every time it rains in New York Harbour and most people don’t even know about it. So there’s a real awareness gap that we’re working with.”

But Pete remains confident in the project’s aims, already seeing an increase in biodiversity and a change in the city’s relationship with the natural environment. As Pete explains: “I’m very lucky to spend a lot of time on the water in New York Harbour and seeing the direct impact of our work. We see an immediate and dramatic impact on local biodiversity whenever we put a reef in the water. The ecosystem is bouncing back, and the water is cleaner every year. That’s super exciting. But what brings me the most satisfaction personally is watching our team, our students and our volunteers develop a sense of ownership over New York Harbour – and that comes from playing a direct role in making it better. You can actually see it in people’s faces. That’s what gets me fired up!” 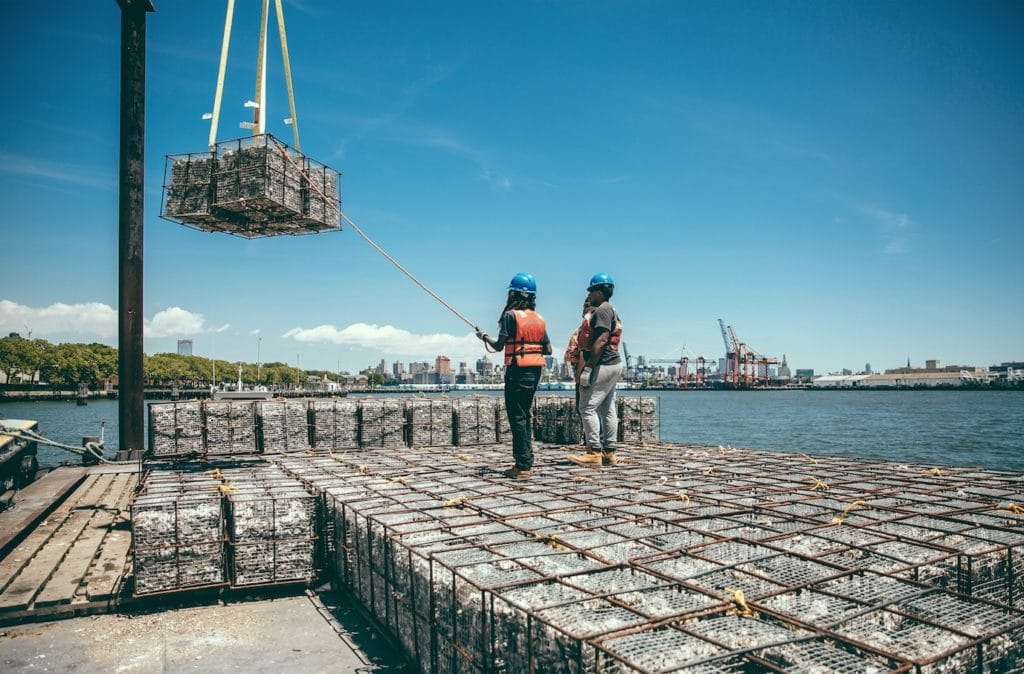 AtlasAction: Get involved (and enjoy free oysters) by becoming a Billion Oyster Project member, sign up as a volunteer, or if you’re an educator, share the ‘Ecosystems Engineers’ curriculum with your students.