Girl bikers, transgender activists, divorcee entrepreneurs and female cricket journalists; this digital platform shows you a different side of Pakistan.

In a country where there are more than 200 million people – and half are female – girls and women go out on the streets, in public spaces, they play sports, ride bikes, some run their own businesses and develop software. But when it comes to social space like the Internet and social media, there is silence. 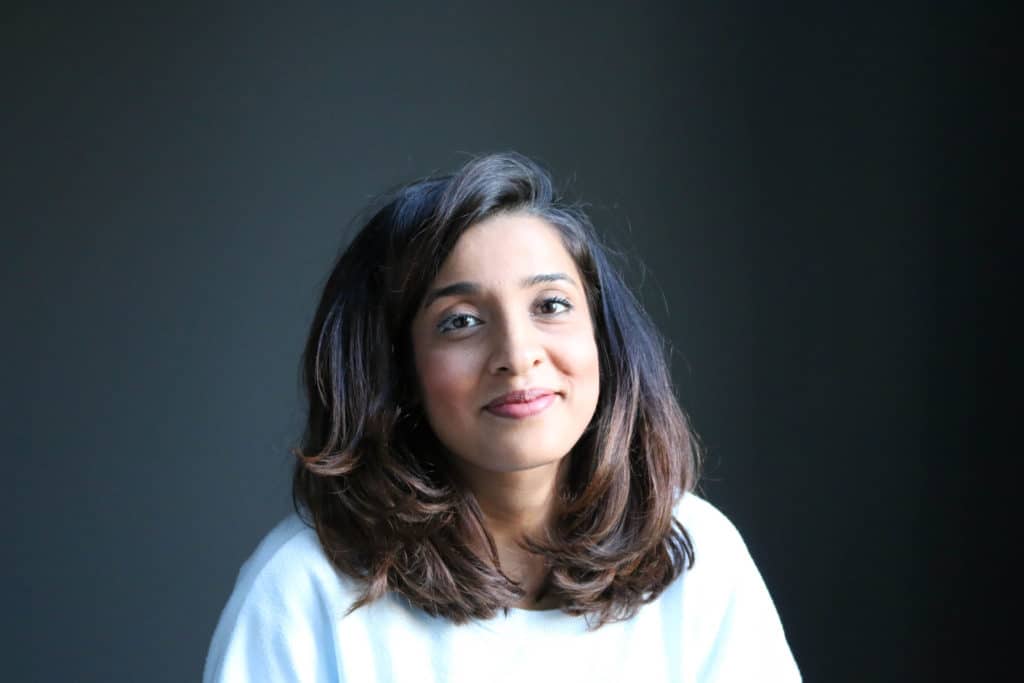 Using Artificial Intelligence and animation, Saba works at the intersection of art and activism to put an end to gender inequality and violence against girls and women – and help them build a meaningful future.

Aurat Raaj translates to ‘Women Rulers’. The empowering initiative is based on the country’s first feminist film which came out in 1979 – the highly subversive ‘Lollywood’ satire about women’s rights imagined a slapstick world in which Pakistani women wear the pants. It inspired Saba to use animated characters within powerful storytelling. But there was another event that also left a mark and made her want to embolden Pakistani women to build warrior mentalities.

Saba created Aurat Raaj in December 2016, a few months after social media star and loud, proud feminist Qandeel Baloch was honour killed by her brother: “I couldn’t believe how many women in my own country were happy about her death and thought she deserved it for exposing her body on social media,” she tells us. “I wanted women in Pakistan to change their minds, be empathetic and see what their lives had potential for besides marriage and kids.” 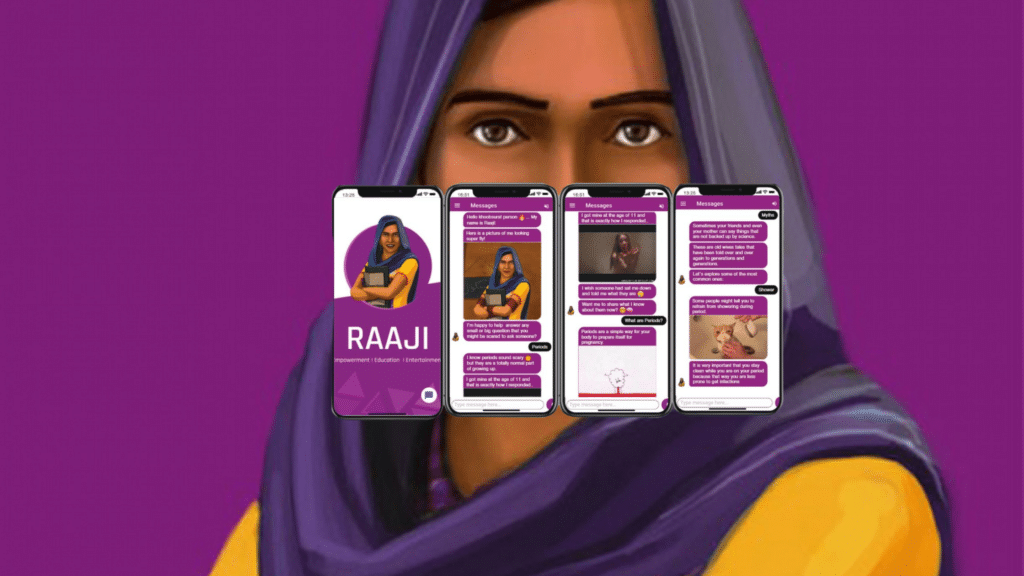 At the time Saba held a fashion writing gig. Surrounded by runways, designer goodies and hobnobbing with beautiful people, she knew it was a job most women in Pakistan would long to have. “But each time I wrote ‘couture’, ‘bespoke’ or ‘designer’ I wanted to hit my head against a wall.” So she started writing about inspiring female role models in STEM and the problems that women faced in Pakistan – in order to create a pool of articles that broke away from the usual “mascara and lipstick kind of content”.

Then Saba took that one step further by filming live Facebook videos at controversial women-led biking rallies. As soon as she had attracted enough volunteers and people who were interested in progressive values, she held her first event, inviting transwoman activist Kami Sid to guide students and tech enthusiasts on how to use social media for transgender activism. She taught girls in Karachi at schools and universities about consent, body confidence and how to protect themselves against harassment. “We wanted girls to step out of their homes, to not be scared, to take up jobs and attend schools and universities.”

However, every day Saba received many messages from girls in trouble as she tried to connect them to shelters, hospitals and non-judgemental doctors. Long-term, this strategy was close to impossible for a very small team. “I also was very scared about doing this openly with my name as my parents are very conservative and fear for my safety in a country where activists often go missing for saying the wrong thing.”

That’s when Saba came up with the idea of creating an animated web series with a courageous character Raaji: The Ultimate Survivor at its heart. The patriarch-fighting protagonist is a survivor of an honour killing attempt. “We use her storyline to talk about abuse, child marriages, entrepreneurship, STEM fields, female driving and biking, etc. Whatever values and ideas I couldn’t say out loud with my name, I put them behind Raaji.”

Introducing girls to powerful and inspiring ideas, the series can be dubbed in any language and shown in schools and universities through portable projectors. The first episode got 130,000+ video views.

Saba soon realised Raaji could be much more than an education series, so she made her avatar into a myth-tackling chatbot, thereby automating the process of managing queries. “By powering a character like Raaji with Artificial Intelligence, we could allow her to answer all those questions, difficulties and confusions girls have 24/7.” Young girls could talk about pressing topics they can’t talk about with their families, such as puberty, menstruation, reproductive health, hygiene and much more – without judgement. 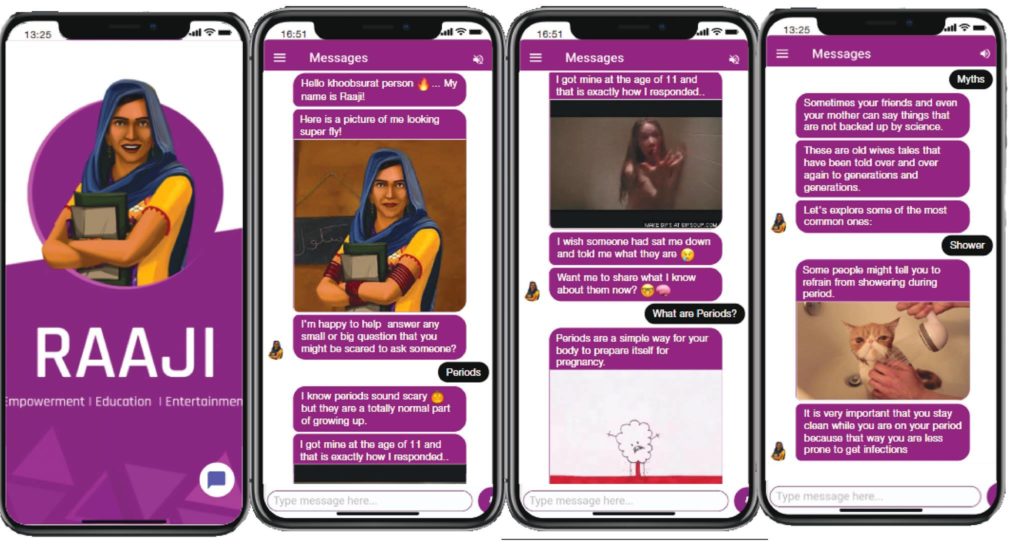 Girls click on what they need help with – ‘Abuse & Harassment’, ‘Health & Reproduction’ or ‘Education & Employment’ – and tell Raaji their problem: “Hi Raaji. I’m being threatened by my family members. What do I do?” In emergency situations girls in need are connected to a trusted partner network of therapists, shelters, NGOs, doctors and lawyers.

“I love that I have been able to create a character out of thin air that so many people around the world are rooting for,” adds Saba. “When my own energy is down and I face failure or rejection, I think from the mind of my own creation. Would Raaji give up? Would she stop fighting for the rights of girls? I get my answer and I continue the grind.”

Every day Saba wakes up to new possibilities of how technology can aid offline activism and make great headway for women’s rights in developing countries. Aurat Raaj run regular self-defense workshops, storytelling circles and empowerment camps in Karachi. Their articles and videos about inspiring female role models from local communities have gone viral.

Auraat Raaj are always looking for connections to NGOs to partner with as they scale the chatbot to other countries. They also want the help of psychologists to help them make Raaji as human as possible, and health professionals to help train the bot on medical topics.

The current team at Aurat Raaj is 10+ people, but the networks are huge as they have been part of two amazing incubators – The Do School in Berlin, Germany and The The Nest i/o in Karachi. Saba’s work has been recognised as part of the IBM Global Startup Entrepreneur program, and she has won the UNICEF Menstrual Hygiene Competition, a Pollination Project Grant and was one of the finalists for global competition She Loves Tech 2017.

In 2020, Aurat Raaj sharpened the focus of its AI on two critical topics. Their chatbot teaches girls about menstrual hygiene, gender equality and mental health. ‘She’ answers questions about reproductive health and provides information about the female body. 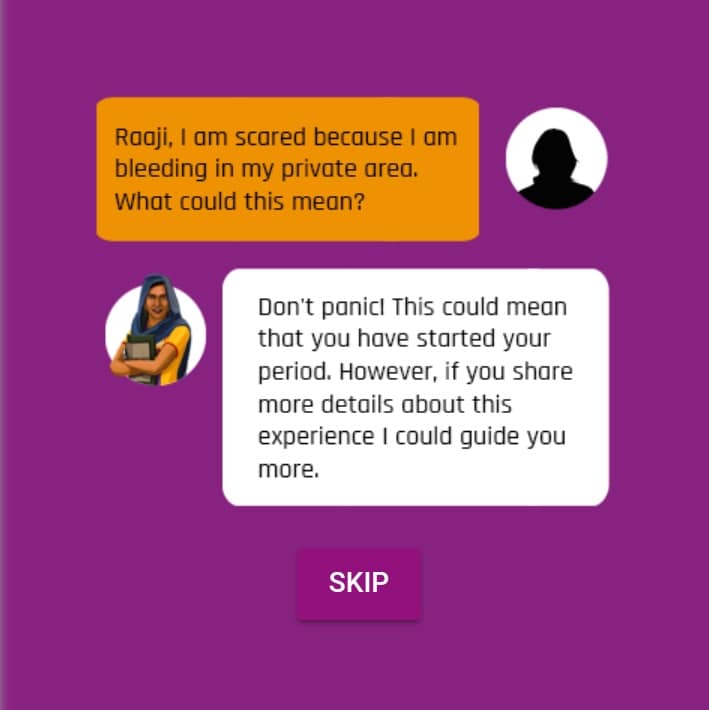 They have also developed a corona bot for kids about COVID-19, providing information about the virus, social distancing and mental health. Always a game-changer, Aurat Raaj continually adapts to current topics and helps tackle big problems in the world putting technology to use for positive social impact.

Saba believes that our world will only change when we realise the importance of creativity. “The bad guys are out there, but the good will prevail through it all if we come up with creative solutions.”

AtlasAction: Get in touch with Aurat Raaj here to help out.

A video shows a local football match kicking off in El Madania, Algeria; another takes us to Cotonou, Benin, to...
See more 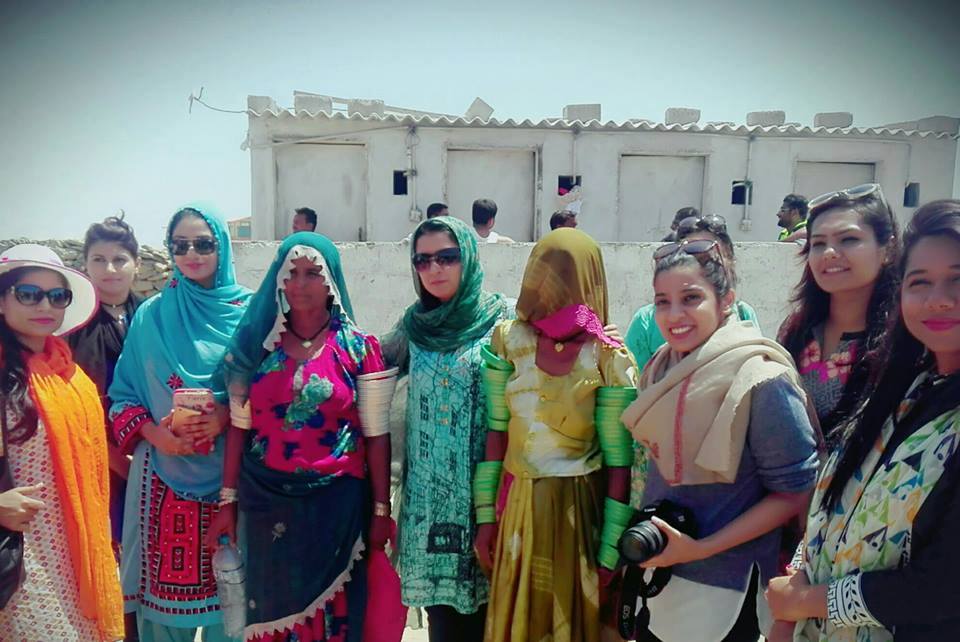 Working with Rural Pakistani Women on a photography initiative 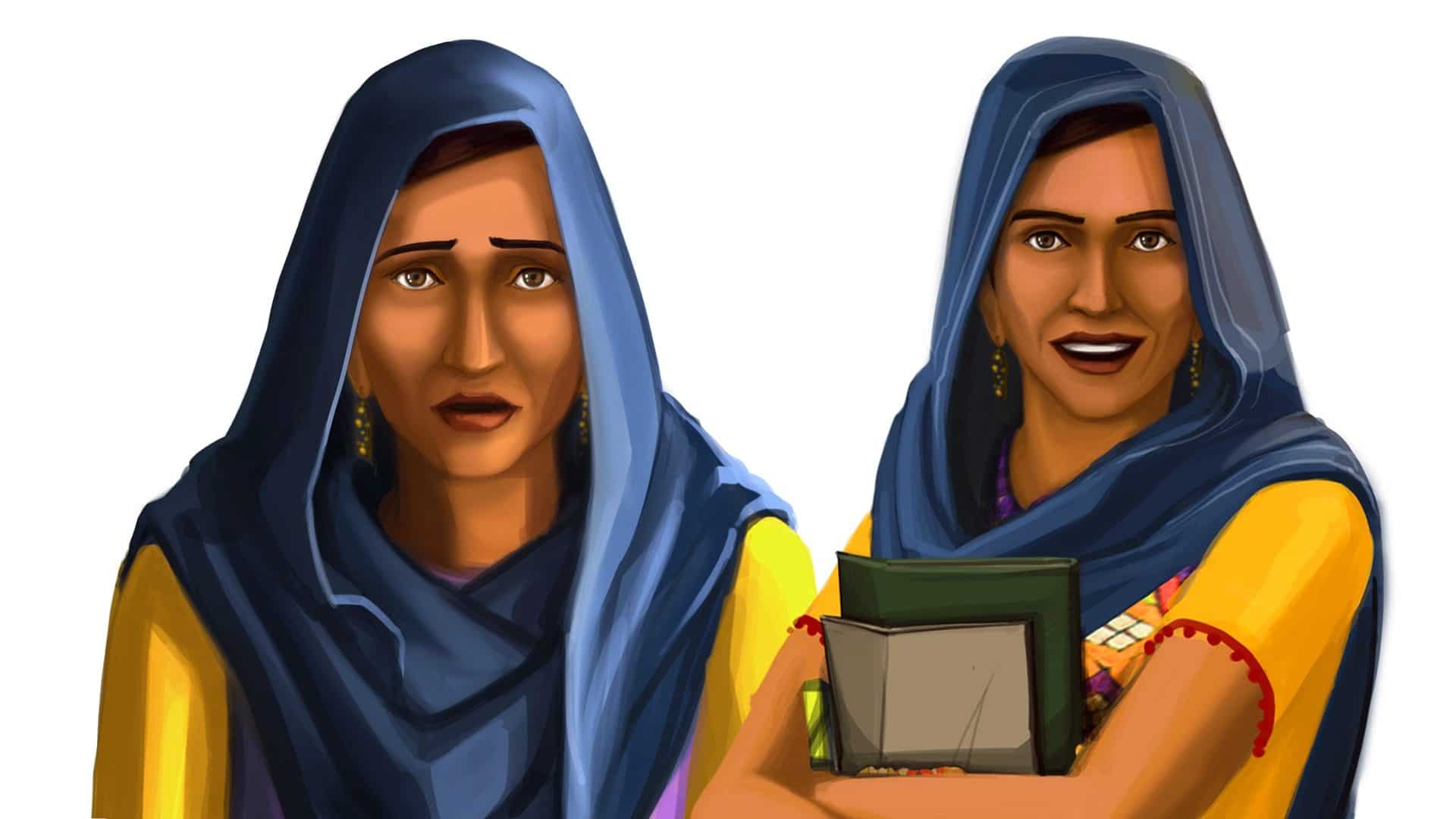 A video shows a local football match kicking off in El Madania, Algeria; another takes us to Cotonou, Benin, to...
See more