In the Brazilian Amazon, tiny native seeds are saving forests, communities, and the climate.

Any gardener will tell you that there’s no joy quite like witnessing the first seeds sprout into tender plants in the springtime. But what if those seeds were regenerating lands, empowering communities, and saving our entire planet?

Meet the Xingu Seed Network, an organisation made of nearly 570 seed collectors restoring the forest and improving the living conditions of Indigenous communities near the Xingu River basin headwaters, which stretch across the Brazilian Amazon forest and the Cerrado biomes.

The initiative started as a campaign in 2004 when 20 communities living along the Xingu river noticed that deforestation had worsened the area’s water quality and quantity as farms replaced native trees. In collaboration with NGO Instituto Socioambiental (ISA), Indigenous leaders from Xingu Park (Brazil’s oldest Indigenous territory, extending for 2.6 million hectares — about the size of Massachusetts) demanded the river springs be restored and protected. 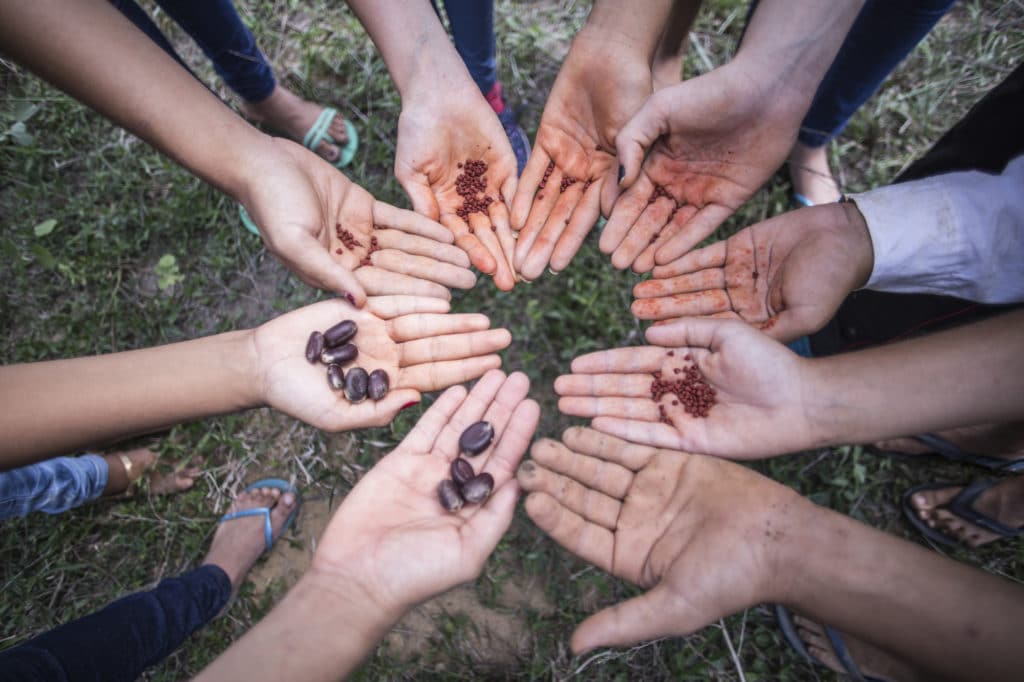 Soon enough, campaigners realised that the most efficient way to save the forest was to plant mixed native seeds. The numbers don’t lie — you can plant 10 times more trees per hectare if you use seeds rather than seedlings, and it will cost you half the price. The high plant density allows for robust, heterogeneous forest structure, which means higher carbon capture, biodiversity, and pollination.

The innovative reforestation technique is called direct seeding or muvuca (‘mixture, crowd’) and forest restorators are now teaching it to farmers, universities, and government bodies.

Because of the success of reforestation efforts and the legal obligation for Brazilian builders to replant the equivalent of the forest areas they destroy, the demand for native Amazon seeds recently increased tenfold, and the Xingu Seed Network was born. 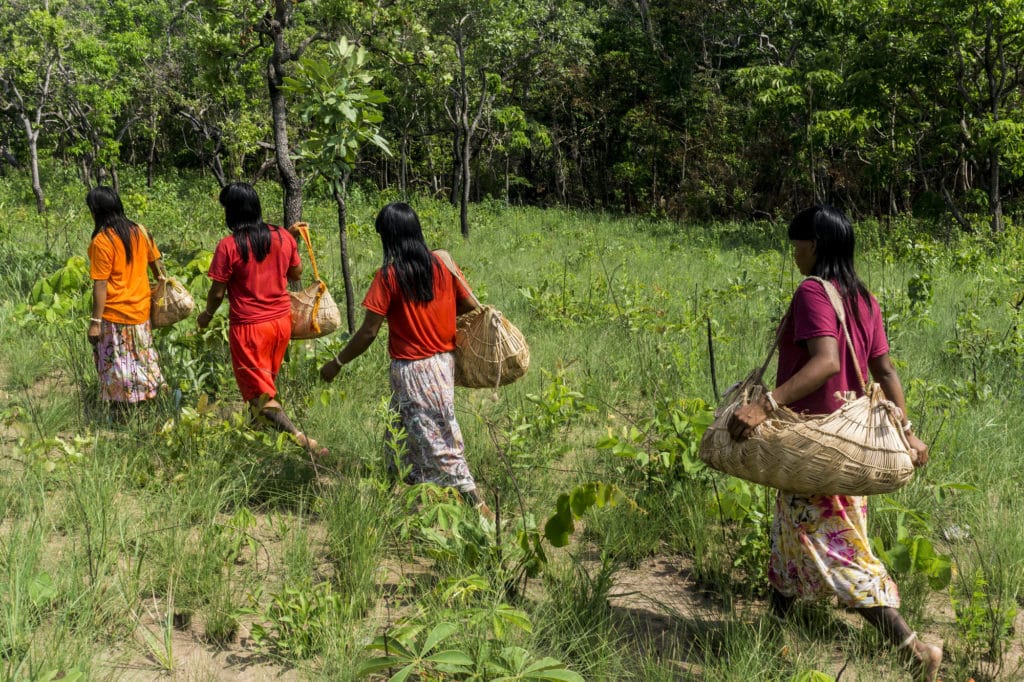 Today, they are the largest seed network in the country and collaborate with other Amazon organisations to ensure supply and optimal genetic variety. The Network manages seed requests and trains collectors on best practices, safety, pre-processing techniques and species identification. It’s become a common ground where different entities, cultures, missions, knowledge systems and resources meet, united by the forest and its wellbeing.

Thanks to the Network, Indigenous communities share their wisdom with each other and with Amazon farmers. They trade and carry out projects together.

For Indigenous seed collectors, the initiative represents a chance to implement their income, reconnect with the forest and give community members an alternative to urban relocation, while supplementing their diet with varied fruit pulp. For rural settlers and peri-urban collectors, seed collection has even become the main source of income. Most of the collectors are women, some of whom have been empowered to generate their own independent source of income for the first time by the Network.

The Network also helped to protect the health of Indigenous communities during the COVID-19 pandemic in one of the world’s most heavily hit countries and in an area where the lack of intensive care units makes contagion extremely dangerous.

Xingu peoples aren’t new to the need for distancing and isolation — in the sixty years after contact by German anthropologist Von den Steinen in the 1880s, the Xingu peoples were struck by alien diseases such as measles and influenza that reduced their small populations by two-thirds. An agreement with a Sao Paolo teaching hospital put a halt to the contagions when volunteer doctors started inoculating and tending the remaining Xingu communities.

Now it’s the forest that prevents contagion. By providing more opportunities to harvest food from the Amazon, the Xingu Seed Network initiative reduced the need to travel to heavily populated areas to buy groceries. Xingu Seed Network CEO Bruna Ferreira told Thomson Reuters Foundation that “Through the seed network, people have gotten back to their forests to learn the variety of fruits, leaves and roots the ancients used to know how to eat.” 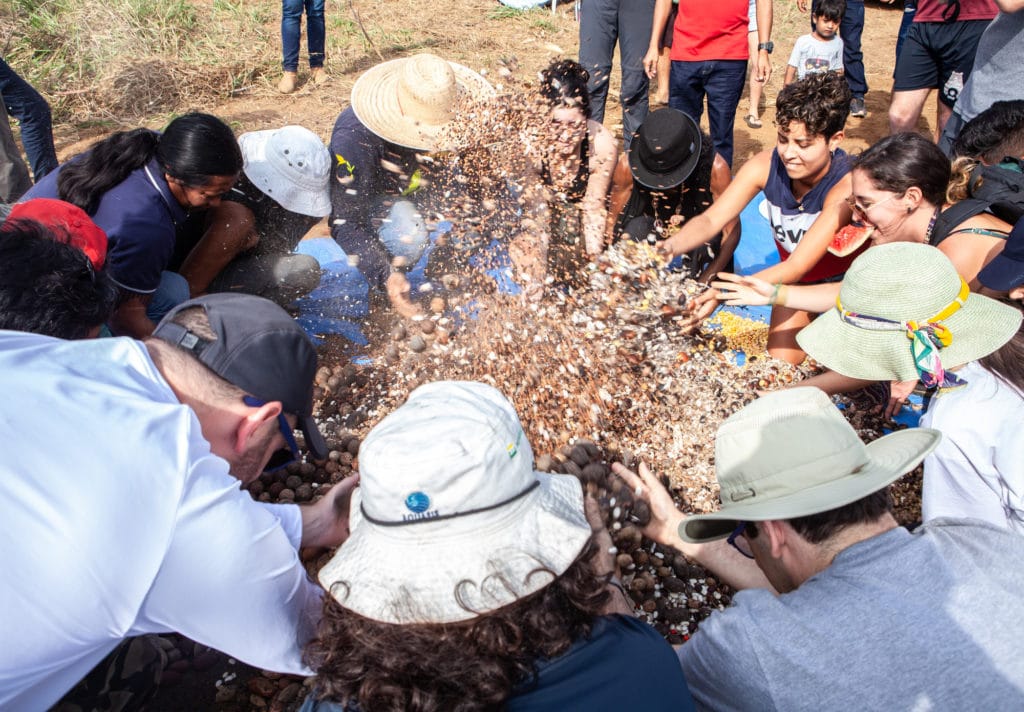 The real winner, however, is the Amazon. The Network has collected around 200 tonnes of seeds from more than 200 native species and has supported the recovery of around 6.6 thousand hectares of degraded forest along the Xingu and Araguaia Basin and in other regions in the Amazon and Cerrado.

Seed collection has proven to be an extraordinary tool in the fight against climate breakdown — it protects biodiversity, accelerates reforestation, and raises the value of standing forest that would be otherwise seen as a resource only through exploitation. Not bad for tiny seeds.

AtlasAction: Contact the Xingu Seed Network to buy native seeds or become a collector. Learn about other projects working to solve the climate crisis.

Kids are running the show in Cotacachi. There’s a rabbit, a princess, a cowboy. Children dancing in circles, a human...
See more
Share this project

Kids are running the show in Cotacachi. There’s a rabbit, a princess, a cowboy. Children dancing in circles, a human...
See more