Six years ago, Barcelona’s street sellers wove together the city’s first union of its kind, the Popular Union of Street Vendors (Sindicato Popular de Vendedores Ambulantes in Spanish.) Their mission was to free the hundreds of sellers caught in an unfair system that makes it extremely hard to enter the mainstream job market yet easy to suffer abuse and stigmatisation.

“We’re like black gold in this city, because everyone uses us to earn more. Politicians use the campaign against us to gain more votes, traders to sell more, restaurants to get more space […] Rich people can occupy public spaces, but Black street sellers can’t. That’s just racist.” — Sindicato Popular de Vendedores Ambulantes.

One of the union’s main goals is to get Spain’s immigration law and street selling regulations amended. Although most street vendors come from Senegal, many have been living in Barcelona for years. Yet, they can’t meet Spain’s strict residency requirements, which include proof of having lived in the country for 3 years (of which at least one at the same address), having learned the language, and a one-year work contract. Unregulated work is the only option for many who become at risk of getting attacked or arrested. 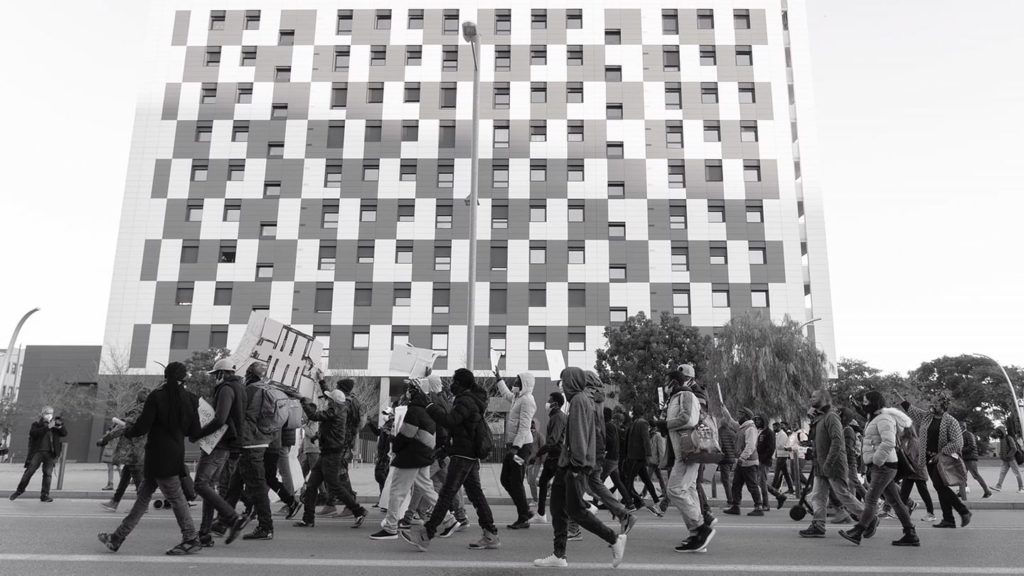 Barcelona’s street vendor union has long fought for the rights of migrants.

In 2017, the union launched its own fashion cooperative and brand Top Manta to legitimise their trade. After years selling knock-offs, vendors finally had merchandise and a logo to sell with pride. The cooperative clearly stands against big brand culture by “benefiting hundreds of people, not just one” and denounces the “racism, persecution, and punishment” that vendors suffer every day.

As part of their work to decriminalise street selling, the union says that they seek recognition from society more than institutions. It’s not only laws but also people who marginalise sellers, and their design for a fair and dignified future has social inclusion at its heart.

The cooperative’s name rebrands the large blanket (manta in Spanish) vendors use to carry and showcase their products, effectively reclaiming the term manteros, which Spanish speakers use to refer to street sellers. Their logo resembles both the manta and the boats that many manteros board to cross the Mediterranean. 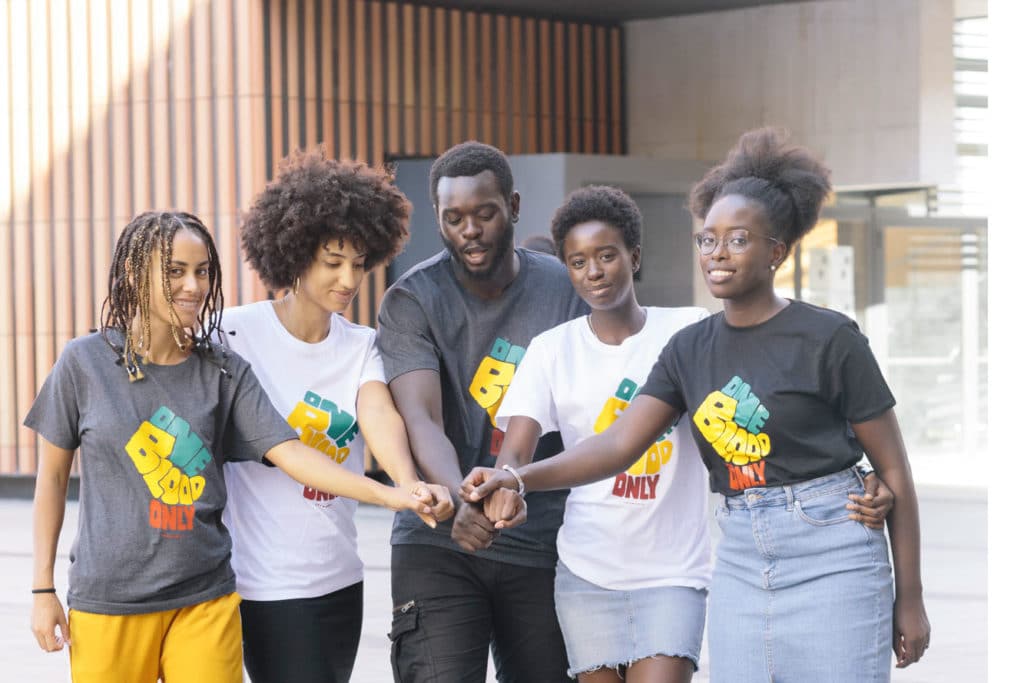 The first line launched with 15 colourful anti-racist t-shirts and a crowdfunding campaign. Local organisations pitched in and invited Top Manta to sell at events and neighbourhood fairs — a collective effort that allowed them to inaugurate their first physical shop in the Raval district. Together with the shop’s doors opened the chance for manteros to get their papers through regular work contracts.

Today, Top Manta continues to produce clothes that are “born in Senegal and designed in Barcelona without exploiting anyone,” and manufactured in Spain and Portugal under fair working conditions.

Top Manta helped 120 vendors leave the street and get their Spanish residence permit, and found jobs for 25 members. They recently launched a new line of trainers called Ande Dem, which in Senegal’s Wolof language means ‘walking together.’

The shoes were designed by a team of manteros in collaboration with an architect and a graphic designer, and the line’s slogan (“It’s not about just doing it, it’s about doing it right”) is a clear reference to the role big corporations play in our broken fashion industry and the hypocrisy of those thinking that ‘just doing it’ is enough to succeed in an unfair system that’s rigged against you.

The manteros’ strong focus on community and healing allowed them to create close-knit ties in the city. During the pandemic, Top Manta stayed true to its intention to “tear down Barcelona’s internal borders” by putting its team and 20 sewing machines to work to make masks and PPE gowns for local hospitals. The cooperative also set up a food bank to support the unemployed.

Barcelona seemed to respond to their care — this year, Top Manta was asked to create the tote bags for La Mercè, the city’s dearest annual festival and public holiday. After years of pulling at the thread of marginalisation, the system of exclusion may be starting to come undone. 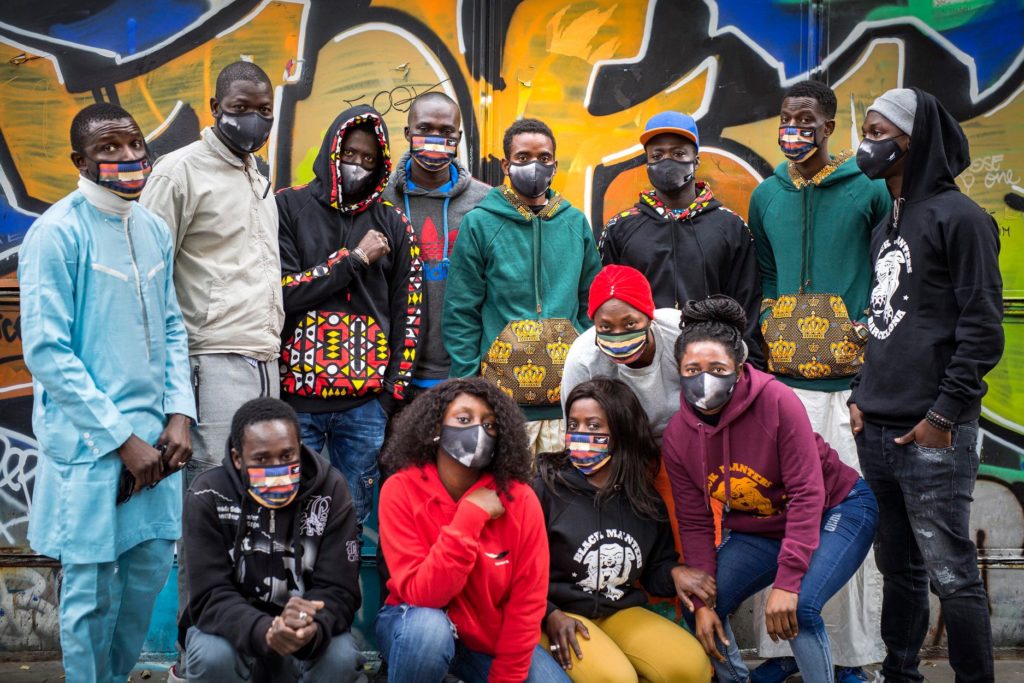 AtlasAction: Shop Top Manta’s collection and follow them on social media. Discover a world of creative solutions fixing the fashion industry in our FashionFutures channel.

🎟️AtlasEvent: Top Manta will be at Fixing the Future Festival ► Grab your tickets.

“Equity is not secondary to survival, as some suggest; it is survival.” — Ayana Elizabeth Johnson and Katharine K. Wilson,...
See more
Share this project

“Equity is not secondary to survival, as some suggest; it is survival.” — Ayana Elizabeth Johnson and Katharine K. Wilson,...
See more