In the remote jungle of South Sumatra, Indonesia, conservationist Pungky Nanda Pratama walks for hours to reach every child with his message of conversation.

The protected areas of jungle in South Sumatra are greatly impacted by illegal logging and poaching activities. As a conservationist, Pungky explains that when he saw this it broke his heart and he knew he had to do something. And that was how The Jungle Library Project was born. 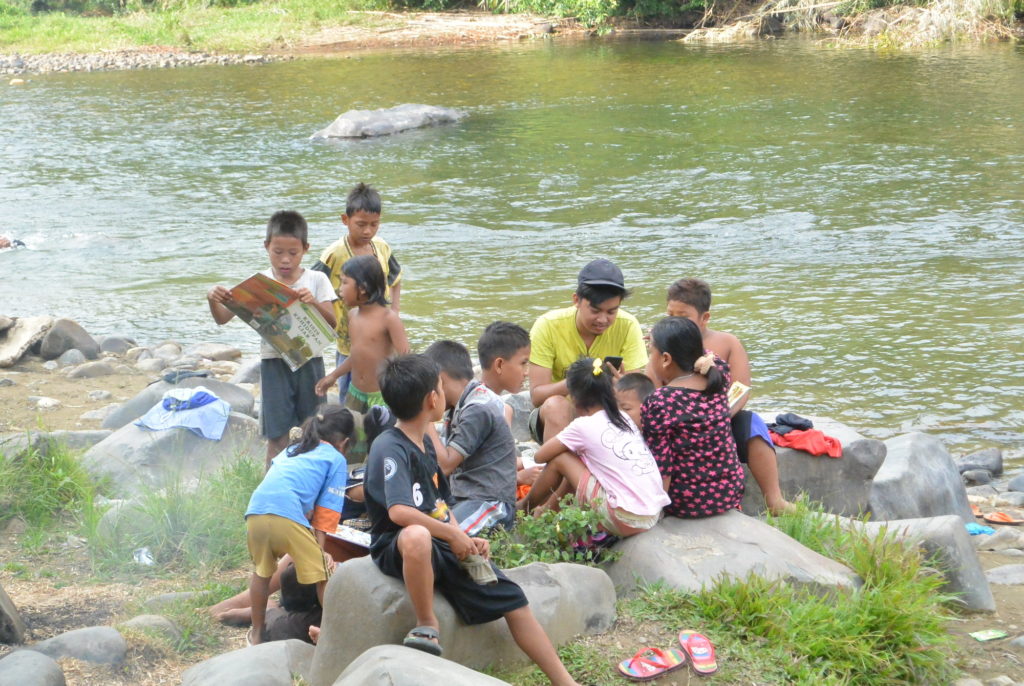 The Jungle Library reaches out to remote villages on the border zones of Kerinci Seblat National Park and the Isau-Isau Wildlife Reserve, South Sumatra, to teach the next generation about biodiversity and conservation. From 2019 to 2020 they taught almost 200 students in 10 schools.

The Jungle Library has developed five key topic areas: forests, rivers, endangered and protected animals, plastic pollution and human–wildlife conflict. However, every village is different, so Punky takes an initial six months to learn about and understand their culture. He learns about the local wisdom and observes before he teaches. That way he can adapt the syllabus to make sure it addresses the problems in each place. Punky then returns to the same village for two years, after which there is a monitoring programme to measure the on going impact. 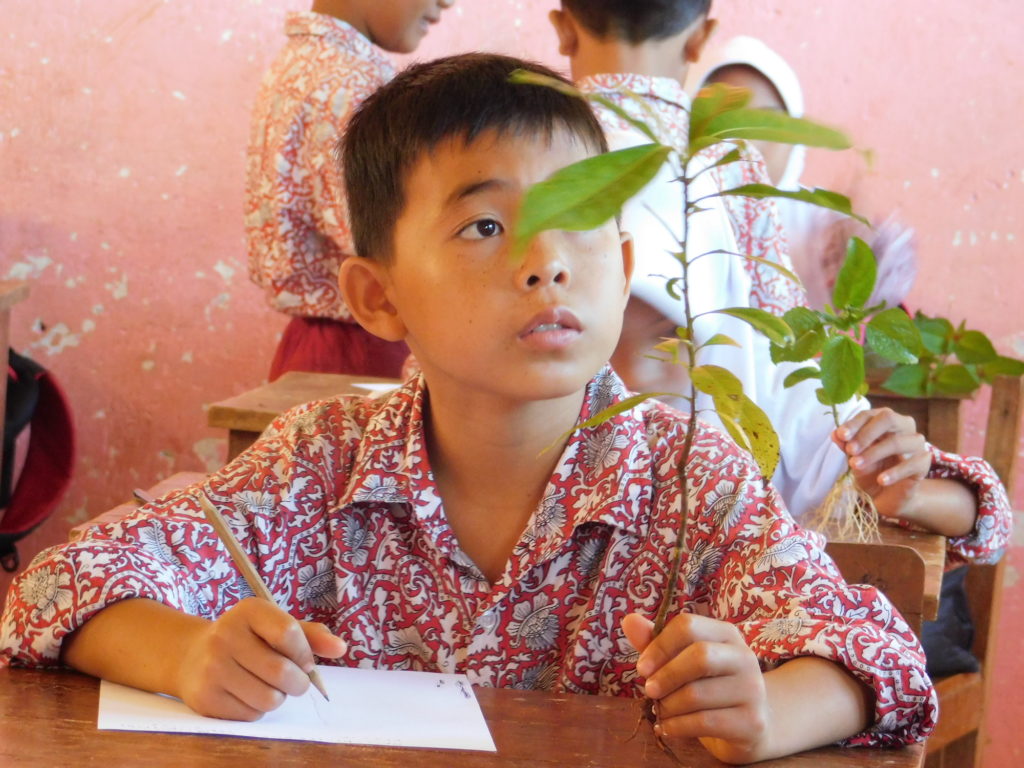 A student of the Jungle Library Project.

Pungky explains that it can be hard to get the children engaged at first, and so most of the classes are done outside. He uses their personal connection to and experience with the environment to show them the real impacts of climate change. He explains, “For me storytelling is really important,” you have to make the story personal and easy to understand for children. The children need to see the problem for themselves, in their everyday lives.

Pungky tells a story of how he explained climate change to the kids, who thought climate change was about snow—something which they’d never seen! Instead, he explains how climate change impacts their daily lives, in changes like the altered migration patterns of the fruit bats due to lack of rain. 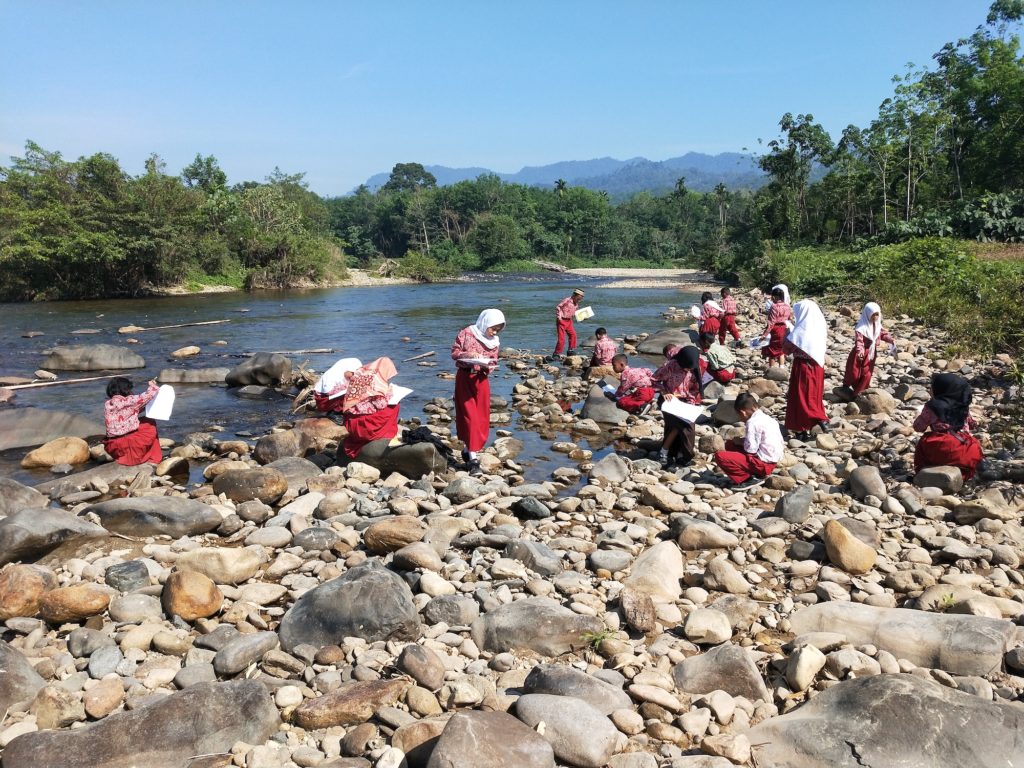 Students investigating the river in the Jungle Library Project.

“Local kids are really, really close with nature. They love nature. I just need to bring them back in the right way to bring them close to nature and to make them more excited about nature.”

He gets them playing in the mud and water to connect with the land instead of with their phones. In his practical lessons he takes them to a dirty river and then to a clean one, and he tells them to compare: why they can’t catch fish in the dirty one? “They need to think by themselves what has happened.” Pungky still remembers trying to drink dirty water as a kid, and he wants to create these impactful and lasting memories for his students. He wants kids to “see with their eyes, hear with their ears and taste with their tongue.” 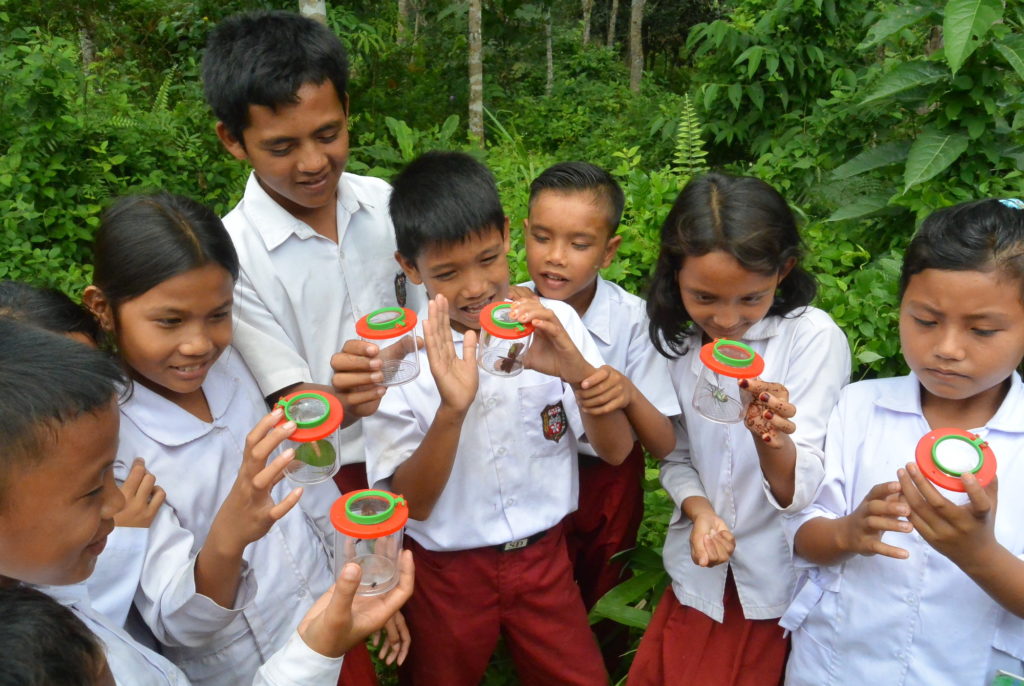 “For me storytelling is really important,” says Pungky Nanda Pratama.

Pungky sees conversation education as one the most powerful tools in changing the local people’s attitudes toward these protected areas. But it’s not easy to change mindsets entrenched in local cultural values, even if these values are putting their health and environment at risk. Several times, Pungky has been confronted by members in the local communities, as they see their way of life being challenged. But he has great faith in the younger generation as educators in their own communities.

“The older generation confront me, because they think I want to change their culture…but I think the younger generation is more open-minded…I’m teaching the kids and I hope that the kids will teach their parents. Most of the time when I try to tell the parents [how to change their behaviour] they avoid it, but there are a lot of cases where parents listen to the kids. That’s why I believe that when the young generation can tell the truth in a simple way to their parents, the parents, I believe, will change their minds.”

When cultural practices are harmful Pungky believes it must be changed, but in the right way, with education and knowledge. Through his conservation education he tries to explain the status of the species, as well as educating his students about the health impacts. He uses science to counter cultural ways of doing (such as eating bushmeat, which can transmit diseases) to show that there are better ways of living with the environment. 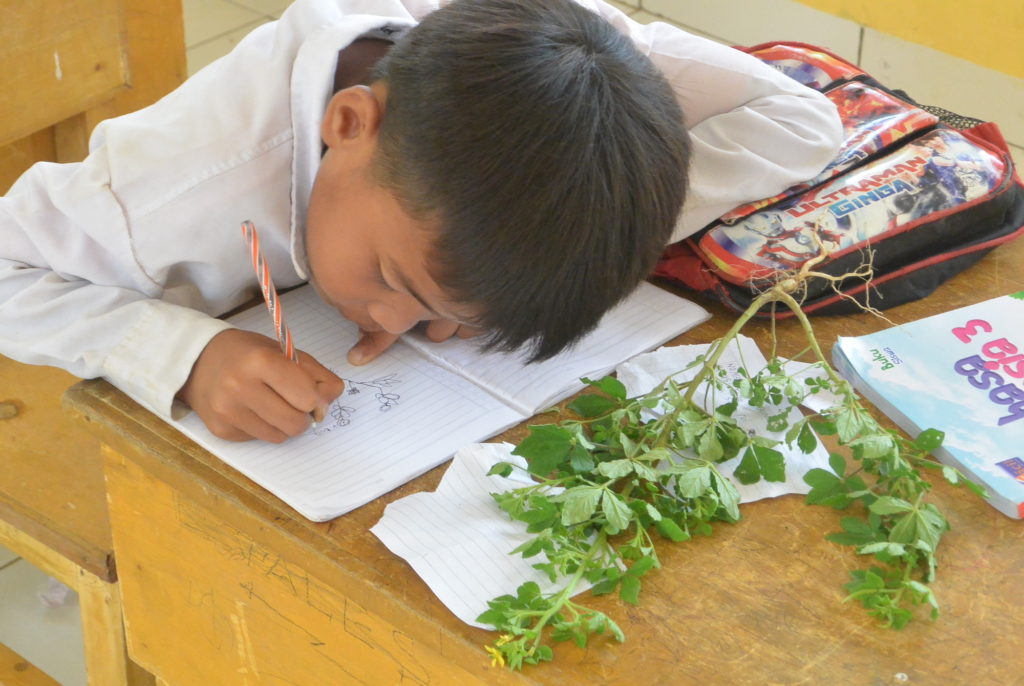 The Jungle Library reaches out to remote villages in South Sumatra, Indonesia.

But conservation education is not enough in isolation. As Pungky recounts, there are times when the parents tell him that they have no alternative if they want to feed their family, which is why finding alternative livelihoods is vital.

In the future Pungky hopes to develop a course to train teachers and advocates, in order to continue his conservation education work: “I would like to create a young environmental educator in every single village where I teach,” and give them more support to dedicate time to education.

Youth activism is on the rise, thanks in part to the actions and visibility of people like Greta Thunberg and...
See more
UK (London)
UK (London)

Force of Nature responds to eco-anxiety through education programmes, consulting and campaigns, asking people to step up rather than shut...
See more
Share this project

Youth activism is on the rise, thanks in part to the actions and visibility of people like Greta Thunberg and...
See more
UK (London)
UK (London)

Force of Nature responds to eco-anxiety through education programmes, consulting and campaigns, asking people to step up rather than shut...
See more