Priya is a ‘rape survivor superhero’. Together these three words are shattering taboos in India, thanks to the powerful comic book series in which she conquers her fears.

Wrapped in a colourful sari and holding her hand to her heart, the green-eyed Priya rides a tiger: “Speak without shame and stand with me… and bring about the change we want to see.” She holds a mirror up – to challenge people’s perceptions of women and survivors of gender-based violence, and is a powerful symbol for the #MeToo movement. 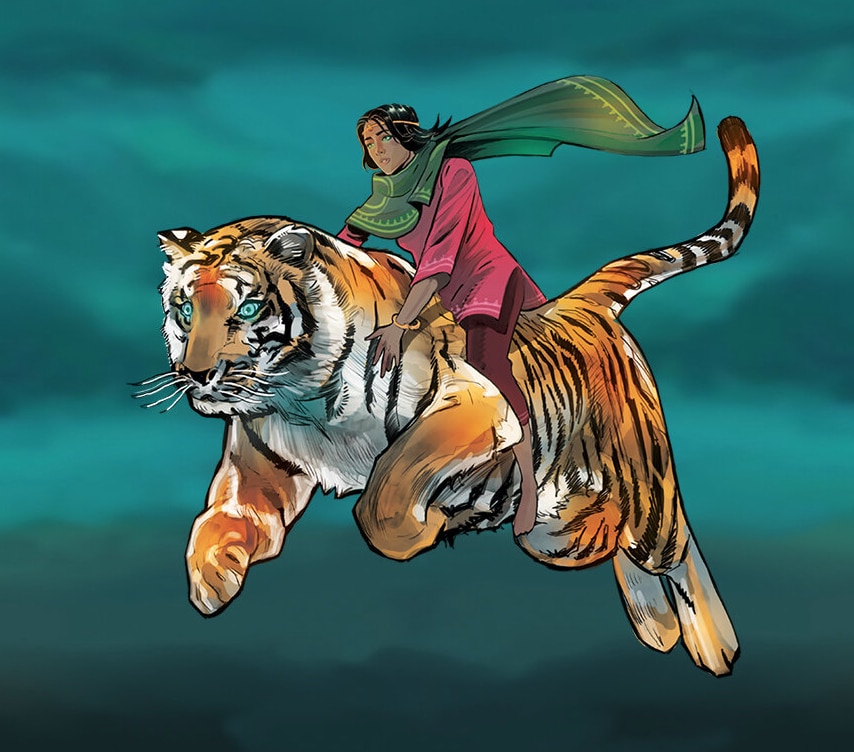 Comics are effective as they can be presented as entertainment, even when they are subversive and educational. You can sneak information in and still make it appear as if it’s just for fun. However, Priya’s Shakti isn’t simply a comic book. Created by Indian-American filmmaker Ram Devineni and illustrator Dan Goldman, it’s engaging young people with their innovative use of AR.

Ram and Dan first met in New York at StoryCode, an open source global community for people who are curious about interactive and immersive technology. It was 2014, pre-Pokémon Go. They decided they wanted to create a multimedia project that uses augmented reality, street art and social media to educate young people about extremely difficult topics.

Inspired to create Priya after witnessing the global outcry to a brutal 2012 New Delhi bus gang rape, Ram got involved in the protests that soon followed. “Like many people, I was horrified by what had happened and angered by the indifference exhibited by government authorities at every level.”

Today one officer remains in his memory. “At one of the protests, my colleague and I spoke to a Delhi police officer and asked him for his opinion on what had happened on the bus,” Ram explains. “His response was that ‘no good girl walks home at night’, implying that she probably deserved it, or at least provoked the attack.“ He realised that the problem of gender-based violence in modern India was not a legal problem, rather it was a cultural problem.

The World Health Organization estimates that one in three women worldwide has experienced intimate or sexual violence in their lifetime, which often goes unreported in countries deeply rooted in patriarchal views. Ram knew that a cultural shift had to happen, to challenge perceptions of the role of women in modern society. He wanted to provide inspiration to thousands of women who have faced ridicule in speaking up.

“What I noticed after talking with both rape and acid attack survivors in India is that society’s reaction and stigmatisation of them intensified the problem and their recovery. How they were treated by their family, neighbours and society determined what they did next.”

The idea of creating a new female superhero came from Ram’s interviews with gang rape survivors. “I realised how difficult it was for them to seek justice and how much their lives were constantly under threat after they reported the crime.” Often the burden of shame is placed on the victim and not the perpetrators, with families, local communities, and even the police, discouraging them from pursuing criminal action against their attackers. “Victims are treated like the villains. This creates a level of impunity among men to commit more rapes.”

You could call their storytelling ‘Hindu-activism’. When Ram began researching Hindu mythology, he discovered rich stories involving regular people and the gods. Priya’s character was inspired by the goddess Durga, or Parvati, who sits astride a tiger. In ‘Priya’s Shakti’, the first in the series, she seeks help from the warrior goddess. (In Hindu Priya means ‘Beloved’ and Shakti means ‘power’.)

Ram was first inspired to add another dimension to Priya’s world when visiting the Sistine Chapel. He found himself wishing that Michelangelo’s masterpiece had augmented reality to help the visitor. So he decided to unlock a vibrant world through the free app Blippar, which transforms the comic into a multilayered pop-up book. Pointing a smartphone at selected images, scanned street art and murals reveals special videos, interactivity and animation. Fans can also ‘blipp’ the comic to take a photo with Priya and are encouraged to post them on social media channels – tagging #standwithpriya to join the movement to fight gender-based sexual violence (GBV), around the world.

For every chapter, the team partners with NGOs to bring attention to the issues. Launched at a cafe run by Stop Acid Attacks, in an AR partnership with the Last Mask Campaign, the sequel, ‘Priya’s Mirror’, focuses on the problem of acid attacks. Users can try on virtual Snapchat masks to help them empathise with victims of acid attacks, and share them on social media to promote awareness. “The founders of these organisations, who are also acid attack survivors, have become the heroes in the comic book.”

The next chapter, ‘Priya and the Lost Girls’ addresses sex trafficking and exploited women in the red light areas, and saw the team partner with Apne Aap Women Worldwide, a grassroots Indian organisation founded by 22 courageous women in prostitution.

Priya has become a global icon reaching over 26 million readers online (and counting), 30,000 free printed comics have been handed out in schools, comic cons and other venues. The series latest comic and short animated film is ‘Priya’s Mask’, which continues Priya’s adventures and focuses on the Covid-19 pandemic.

“The most important thing we want to emphasise is that change is possible. Trying to create a cultural shift is incredibly difficult, but not impossible. India is going through some remarkable and monumental changes in a short period of time. People’s views have not caught up with the speed in which things are changing,” Ram adds. “But what was clear to me from the massive protests that happened all over India after the horrible rape on the bus is that we want things to change in our country. There were so many teenagers and young adults at those protests, and they will be the future catalyst and leaders who will define India, which is a hopeful sign.”

Coming soon: a new series ‘Priya’s Sheheroes’ with female superheroes from around the globe,  led by Ruth Bader Ginsburg, who is being re-imagined as a samurai warrior. Ram updates us: “It initially started with turning Natalia Ponce De Leon, who is an acid attack survivor, into a female superhero in Colombia. The project is now expanding into multiple characters – all women. It was partially inspired by Akira Kurosawa’s Seven Samurai!” 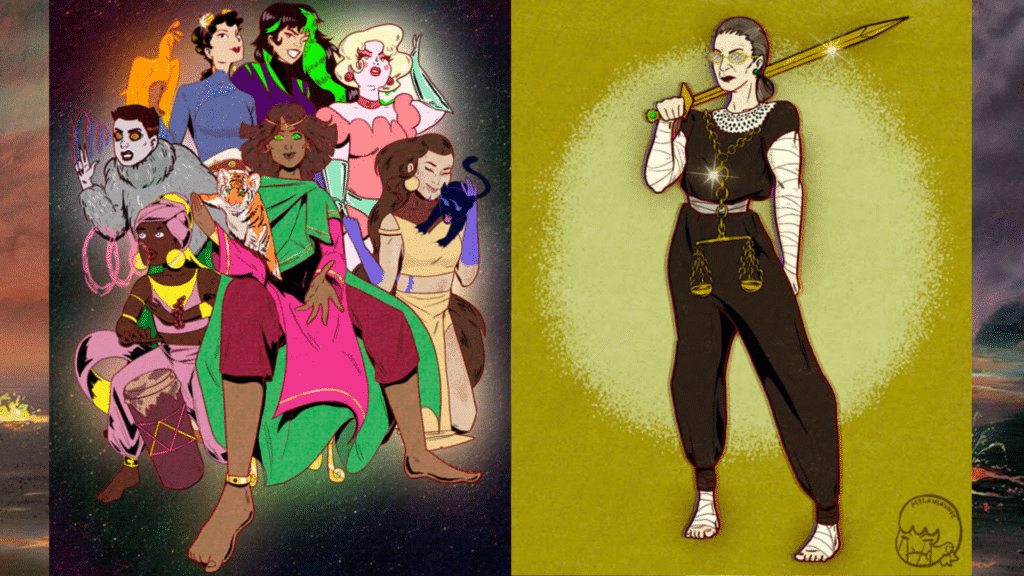 AtlasAction: Download the comic books for free here and, if you want to take next step, help the many NGOs in India and around the world to change laws and provide assistance to survivors.

In old Norse mythology the Aesir are the principal gods of the pantheon. In present day Hong Kong AESIR are serious games for social inclusion....
See more 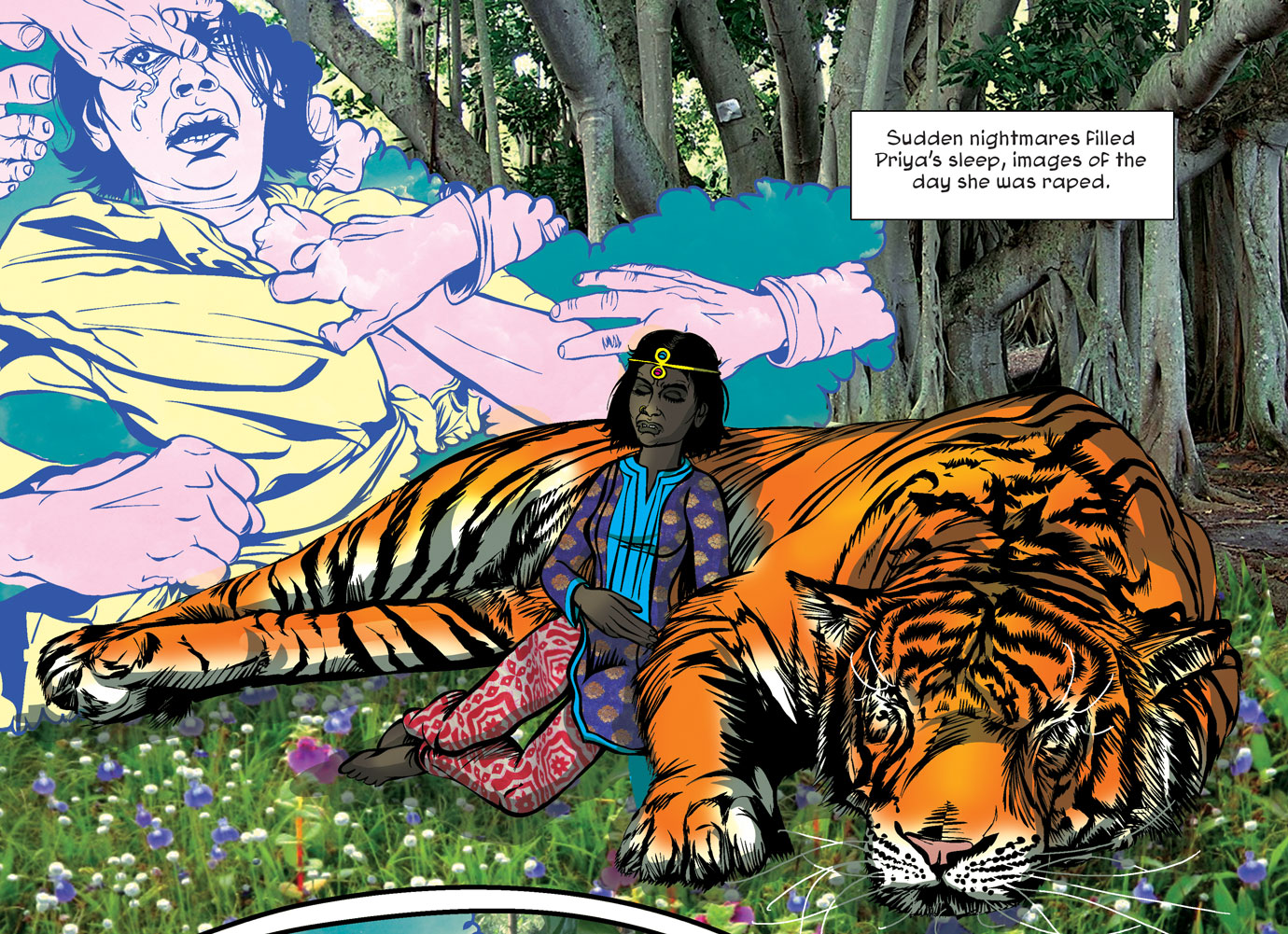 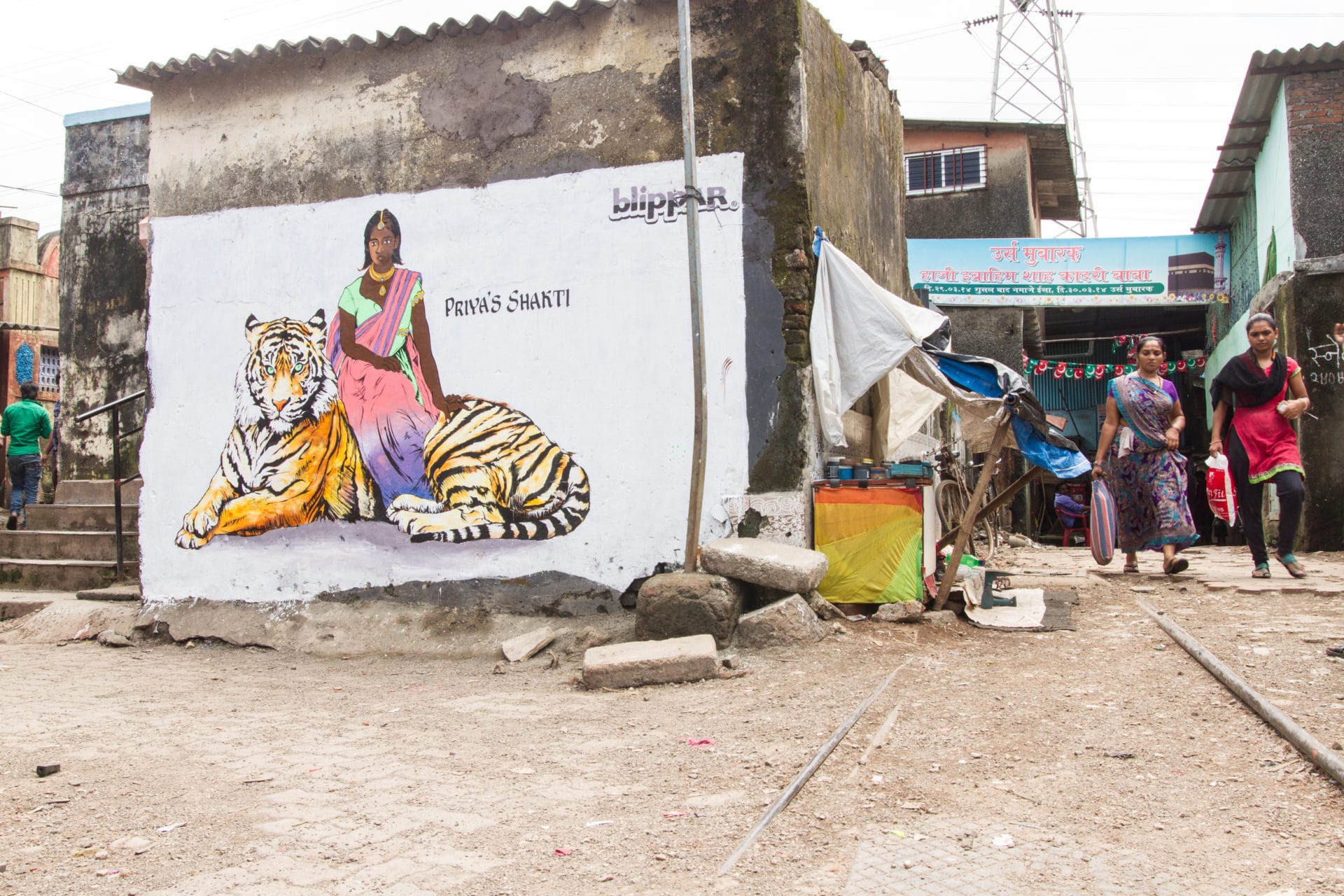 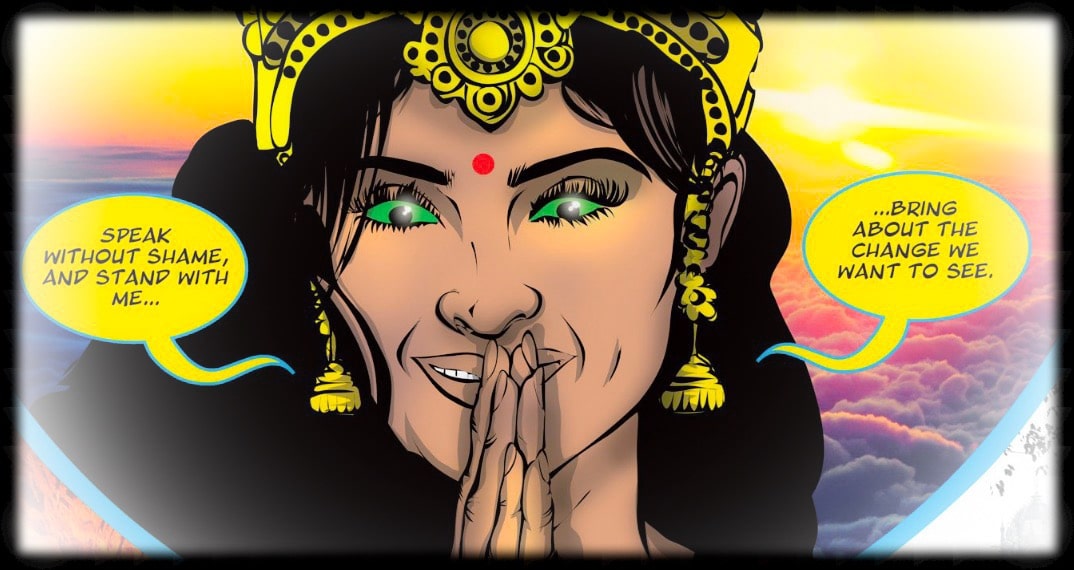 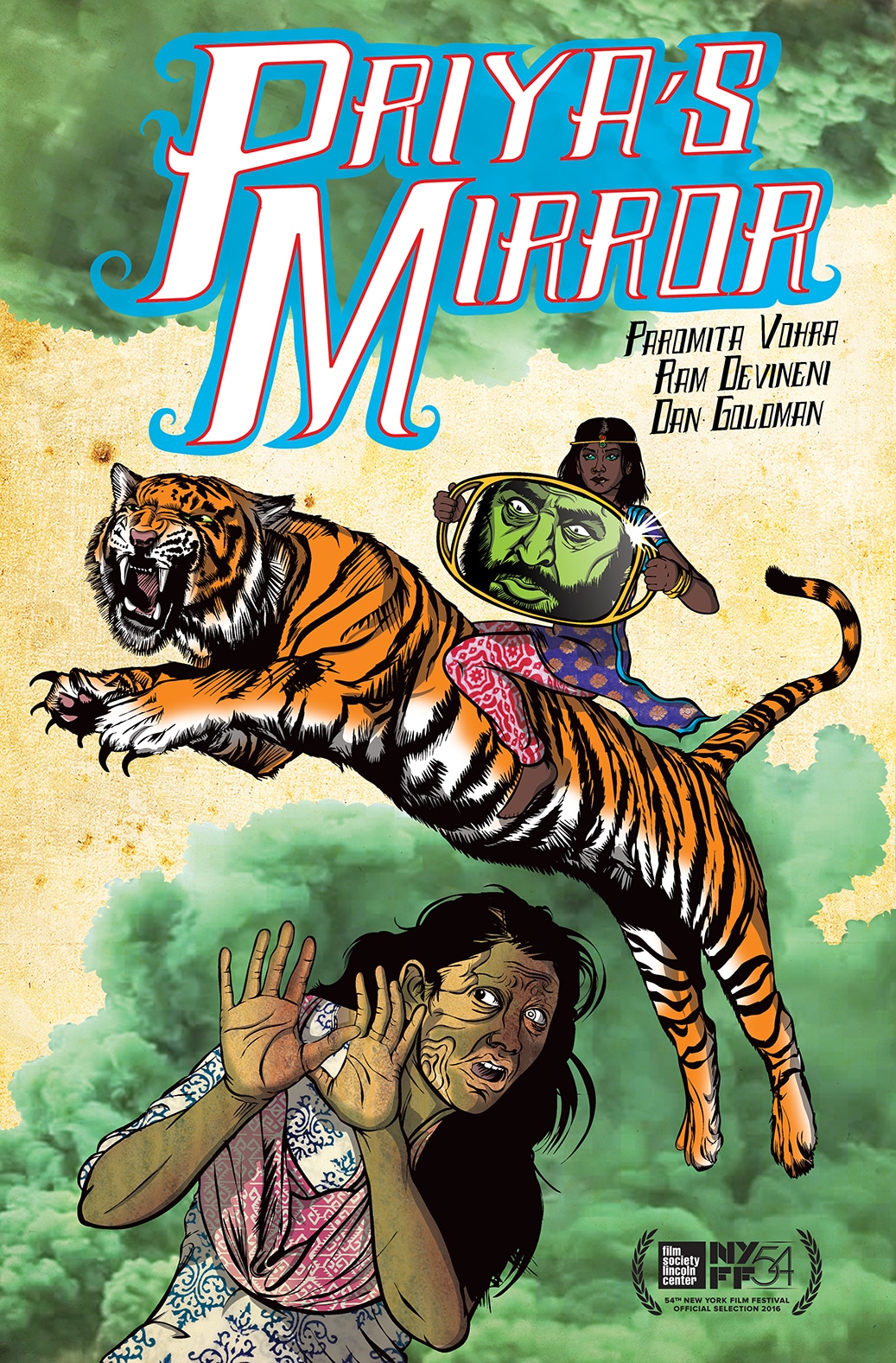 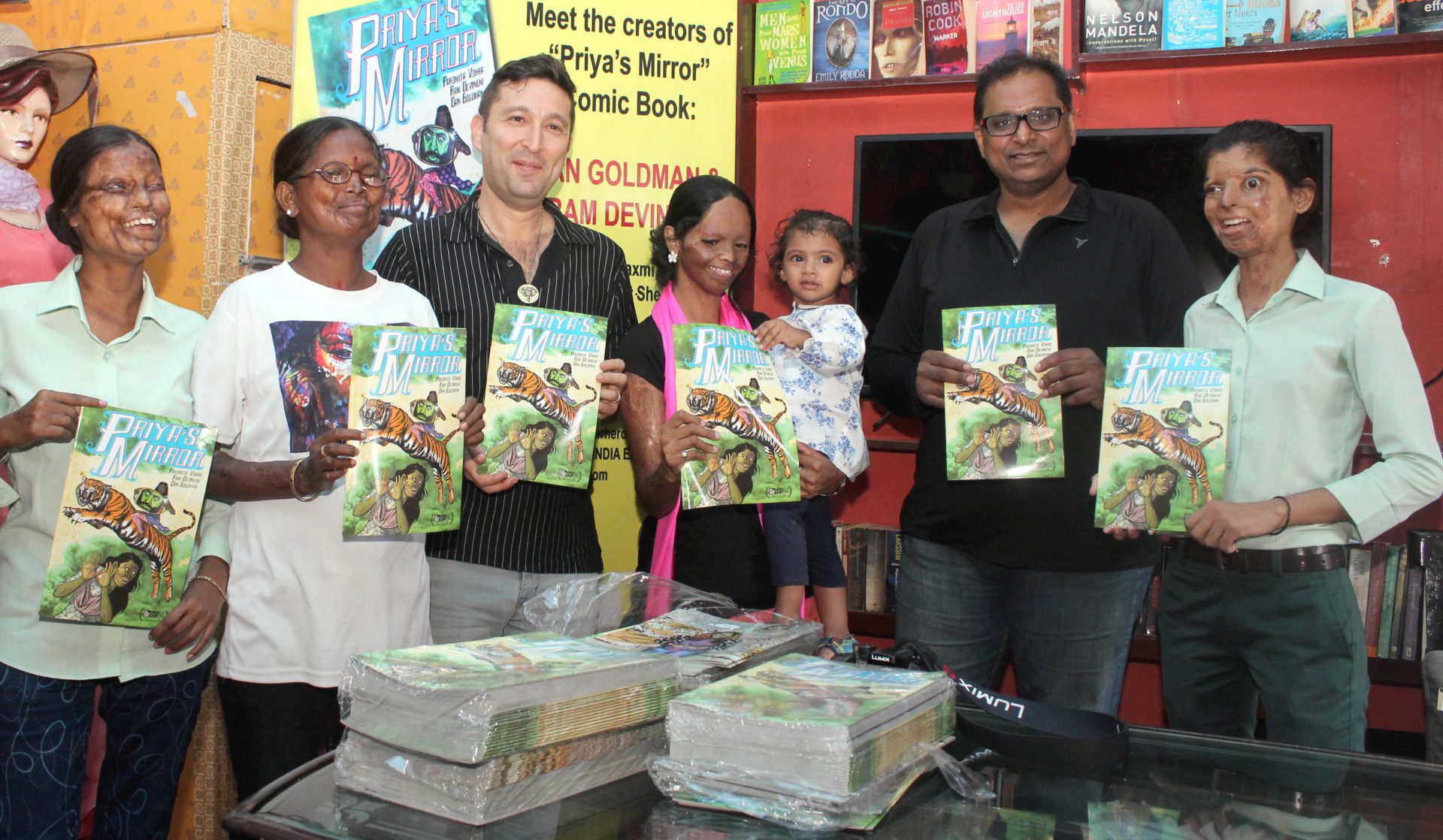 In old Norse mythology the Aesir are the principal gods of the pantheon. In present day Hong Kong AESIR are serious games for social inclusion....
See more