“Muhra in Arabic means ‘foal’, but also new beginnings. It represents what we do here.”

In a discreet five-story building in the Mevlana Kapi neighborhood, Istanbul’s most historic district, a group of Syrian refugee women has been meeting almost daily since 2017. There they craft earrings, sew silk kaftans and kimonos, bead loom bracelets and weave purses.

The people themselves may change from time to time, but the purpose remains the same.

The women are here to become self-sufficient; to produce and sell clothing collections and accessories under their own socially conscious and empowering fashion brand, Muhra. 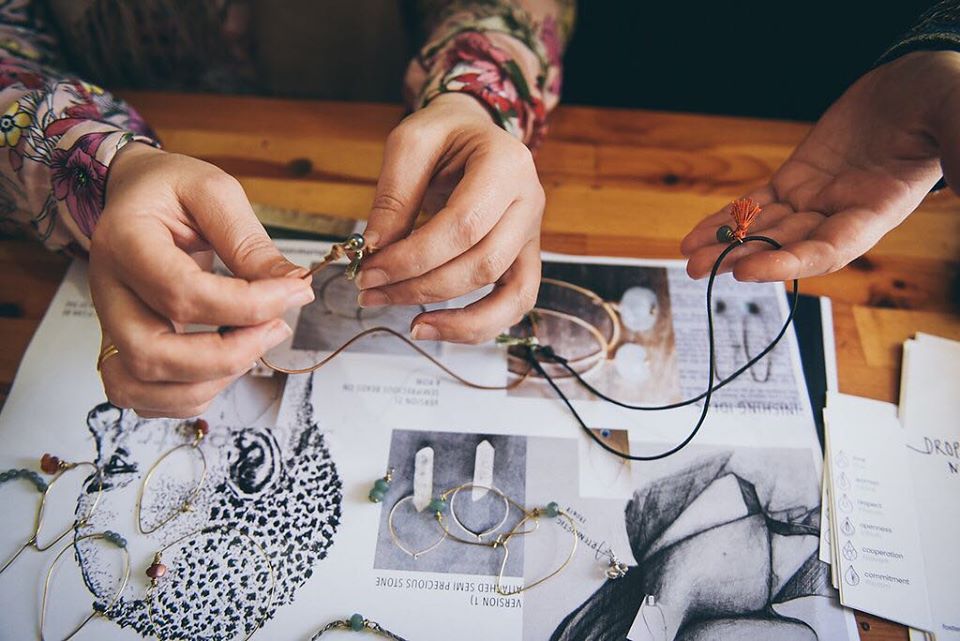 More than 3.6 million registered Syrians reside in Turkey today, according to The UN Refugee Agency (UNHCR ); many of them in Istanbul, the country’s largest city.

In 2015, Australian Karyn Thomas, who lived and worked in Damascus, decided to move there due to the war in Syria. She began volunteering to help families fleeing the war, most of whom she knew from living in Damascus. Soon after, she founded Small Projects Istanbul, an independent NGO that organises livelihood initiatives, educational support and psychological wellness programs for families living in the Mevlana Kapi neighbourhood.

“At first we were in a small place, just a little store,” explains Shannon Kay, the field director. From there, they moved to a larger basement and, a year later, to a rented building. 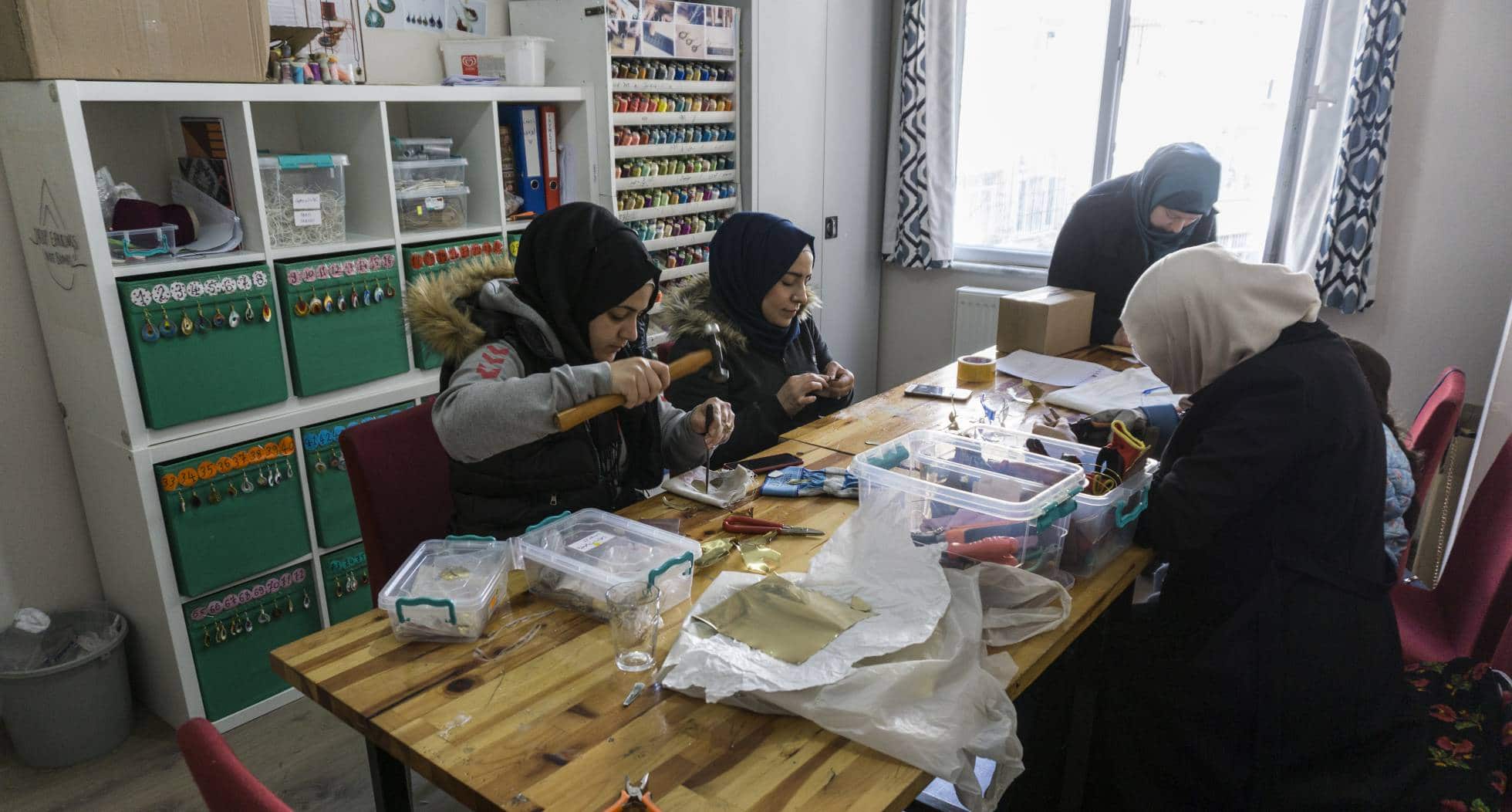 The NGO helps displaced families in the neighbourhood, empowering women through work and interpersonal relationships within the community. “In the first six months we worked with about 30 or 40 families. Today we have more than 450 people, mostly women, who actively participate in or benefit in some way from our programs, ”says Shannon.

The group has been learning various techniques and in 2016 they started producing the ‘Drop Earrings Not Bombs’ collection. A year later, they also started making T-shirts, bags, kaftans and other accessories, which is where the idea of ​​creating their own fashion brand arose.

“Muhra in Arabic means ‘foal’, but also new beginnings. It represents what we do here,” operations manager Rahaf Saad explains.

Rahaf hails from Latakia, Syria, and arrived in Istanbul in 2015. A year later, she started visiting the community centre and soon got involved in the program. “At first, it was not very easy for everyone to learn techniques,” she explains, “but trying again and again, making mistakes and correcting them, now they do it very well.” 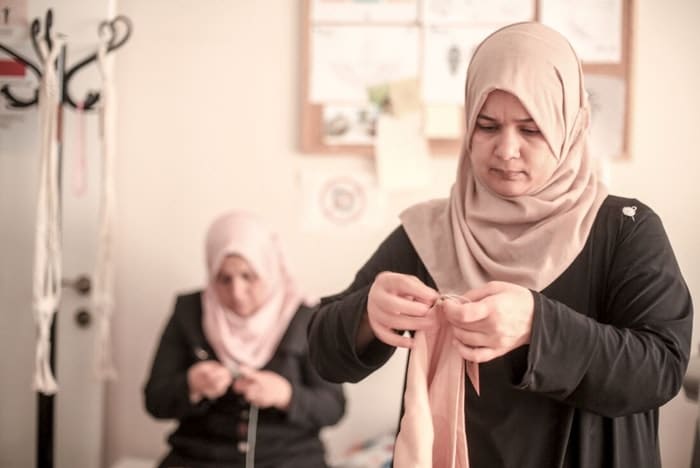 Shaymaa Salem, the director of the earring collection, confirms this. Despite the difficulties she faced, she is happy that she was finally able to escape the war. “I am from Aleppo, in Syria. Everything was destroyed there. We had no electricity, nothing,” she says. Shaymaa was a 36-year-old woman when she migrated to Istanbul in 2016 with her parents and six brothers and sisters. She studied law at the University of Aleppo, but cannot practice law in Turkey. Although she is gradually learning the language, her Turkish level remains a barrier to employment in her field.

Shaymaa enjoys working for Muhra and connecting with other Syrian women, but is saddened that the Turks have begun to feel resentment against the refugees. “At first, we were welcomed, but not anymore. It is probably because it’s been nine years since we started coming, and we do not stop arriving. It’s a long time.”

Rana Sawwas, a member of the Muhra group. had never worked before arriving in Istanbul. “I make earrings, love learning new techniques and feeling good about myself,” she says. She got to know this project through other Syrian women, like Shaymaa. “In Syria, men had to look for work and work; women, no,” says Rana. “Now we all have to work. I hope to return home one day.”

These artisans produce, among other things, 200 pairs of earrings and approximately 50 shirts per week. “Our capacity has increased,” says Shannon proudly. 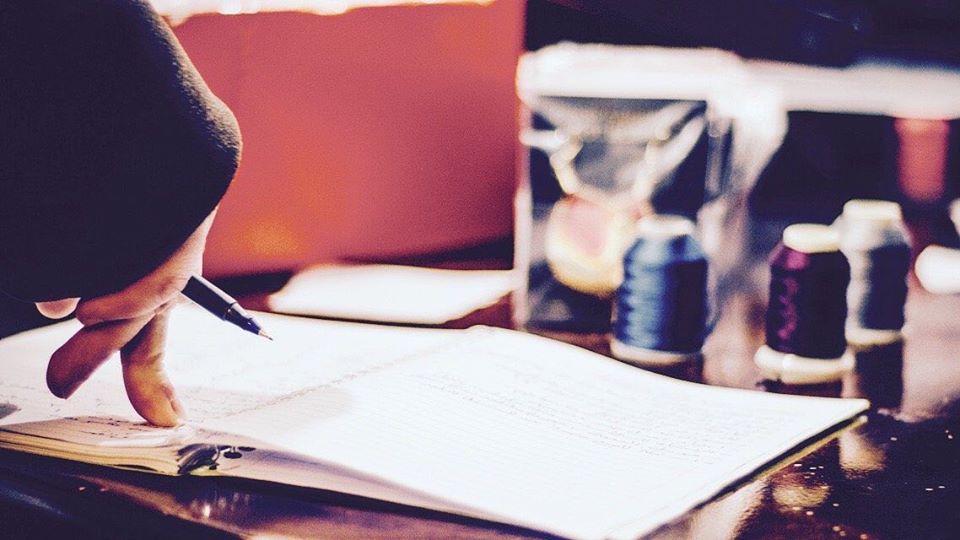 Today they send their products to fair trade stores with which they collaborate in the United Kingdom, Australia, North America, Estonia, the Netherlands and Germany. But its best-selling product, the earrings, has reached Taiwan and Hong Kong, among other places in the world. Through alliances and donations, they keep the engines moving and the women, by working, feel good about themselves, earn money for the family and develop their potential.

Muhra is part of Small Projects Istanbul, an NGO established in 2015 to support those displaced by conflict in Syria, the Middle East and the North Africa Region. Currently, they have a network of over 2,000 beneficiaries, including 200 families and 350  children. Every week, they organise over 20 activities in support of community building, personal and professional enrichment, livelihood support and social cohesion.

“Women who have endured very hard times, who have lost many things, who have gone through difficulties to feel good about themselves, now have the opportunity to learn techniques, forge friendships – both with team members and volunteers – and see that, thanks to the work, they also earn money and receive a positive response. That’s the most important thing,” says Shannon.

“Now they look at life differently. This is a business for them and by them. There is an element of empowerment in it. “

Update from Rhaf on 5 May:

“For now we have had to stop the training activities and group gatherings. Production wise, the women are working from home. Hopefully, this is temporary and is going to end soon.”

Read more ► Read a piece about Muhra in Spanish in El Pais.

It's easy to help farmers: gift a tree & follow its journey

“There's an Eskimo on a mass of ice, a Bedouin in the desert and a Polynesian at sea. All three of...
See more 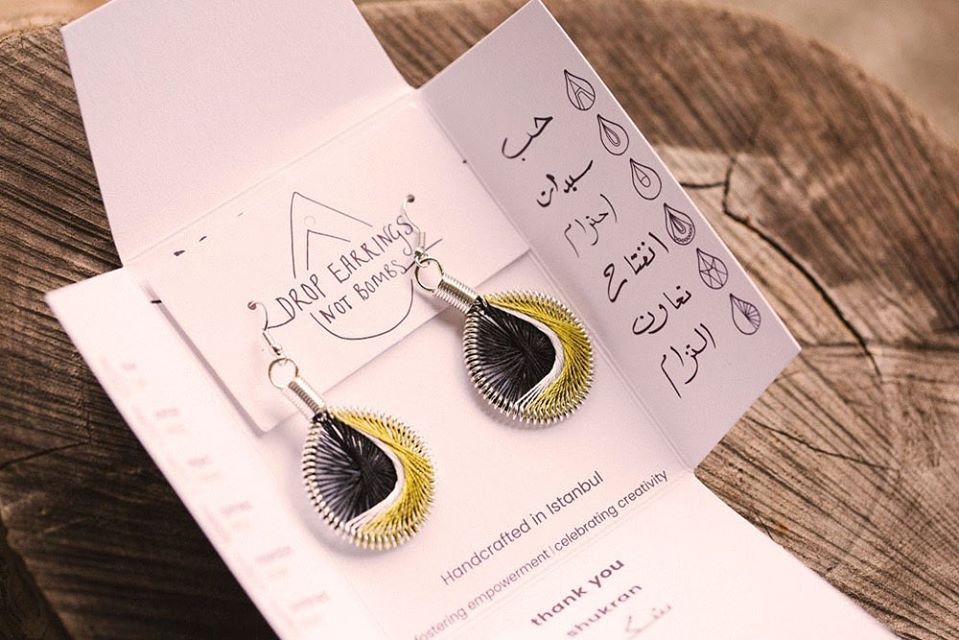 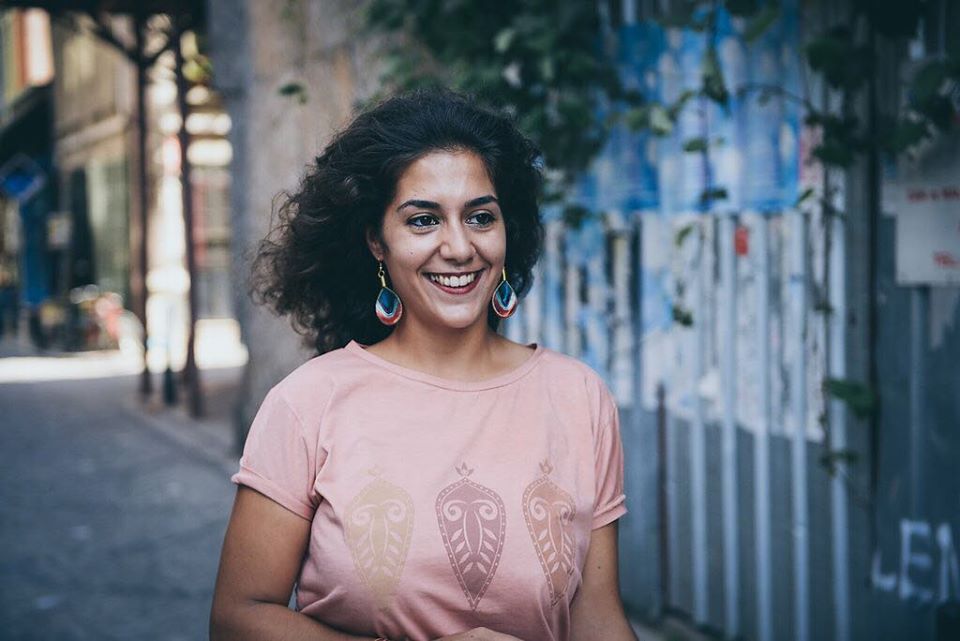 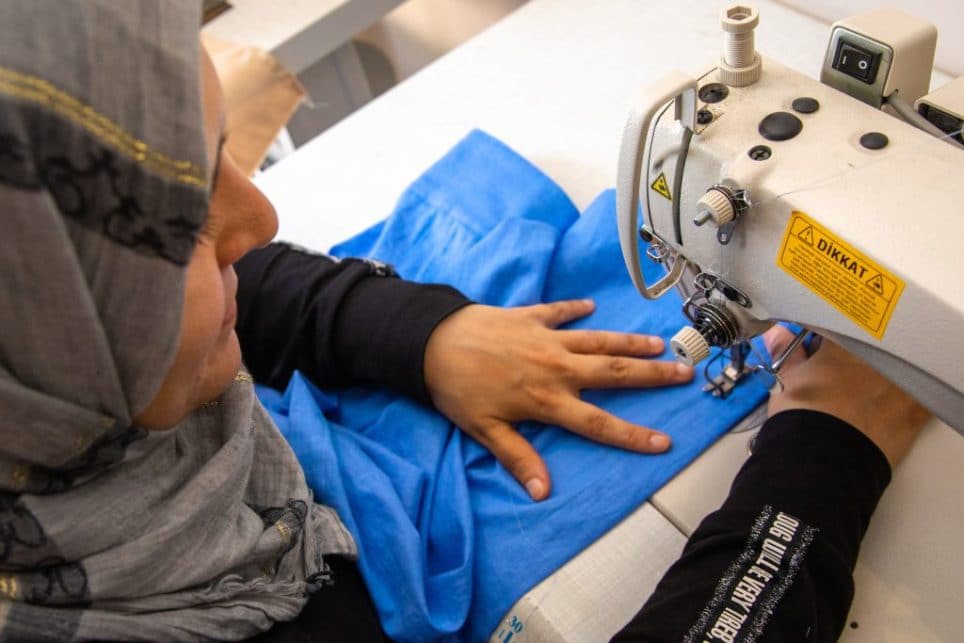 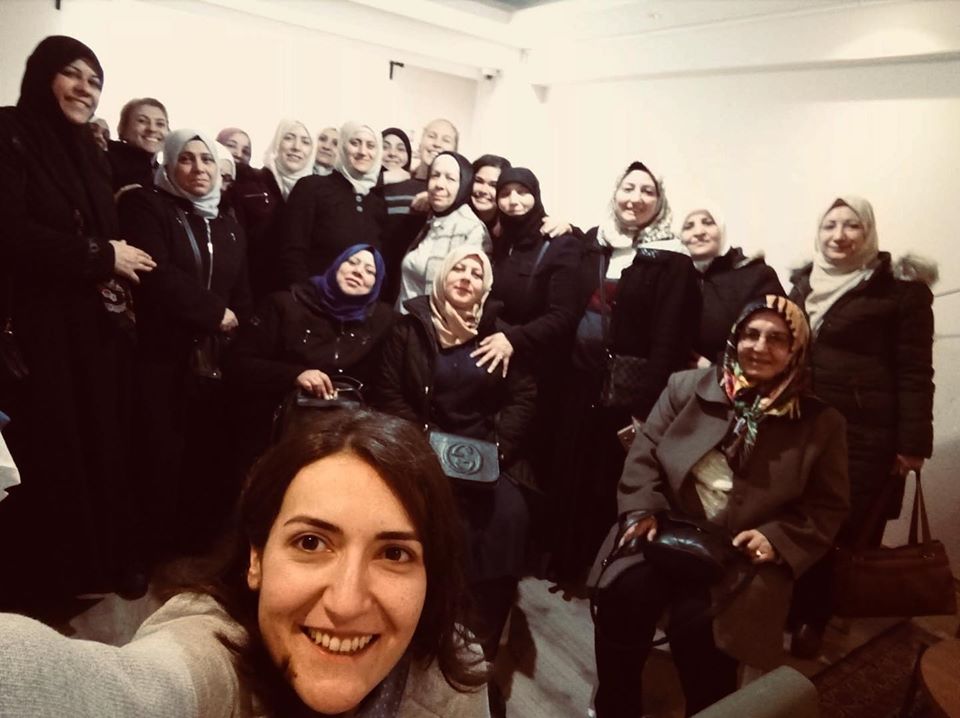 Shannon Kay with the Muhra women

It's easy to help farmers: gift a tree & follow its journey

“There's an Eskimo on a mass of ice, a Bedouin in the desert and a Polynesian at sea. All three of...
See more