Where’s gender in the climate change negotiations? The Gender Climate Tracker app and platform answers this question with the latest information, data and resources.

Women’s participation at the major negotiating meetings of the United Nations Framework Convention on Climate Change (UNFCCC) has been improving over the years, both overall and at the highest level of decision-making. In 2018 at the UNFCCC women accounted for around 40% of all national Party delegates and around 30% of the Heads of Delegations. This is an important step as it’s a forum where global climate policies are negotiated and determined, and it is vital to include women’s voices at this decision-making level.

As the Women in Power report states, “The effects of gender imbalance amongst decision-makers go beyond headline statistics. The lack of power and influence wielded by women in public and political life is undermining progress towards a world where poverty is eradicated and men and women are able to build sustainable and secure futures for themselves and their families.”

However, women remain widely underrepresented on the delegations of many countries, including on the delegations of countries most vulnerable to climate impacts. To make sure gender equality is attained at all levels in the climate change negotiations, we first need to know where progress is being made and where the gaps still are. Data is one way to track progress and highlight gaps in implementing gender-responsive climate action. 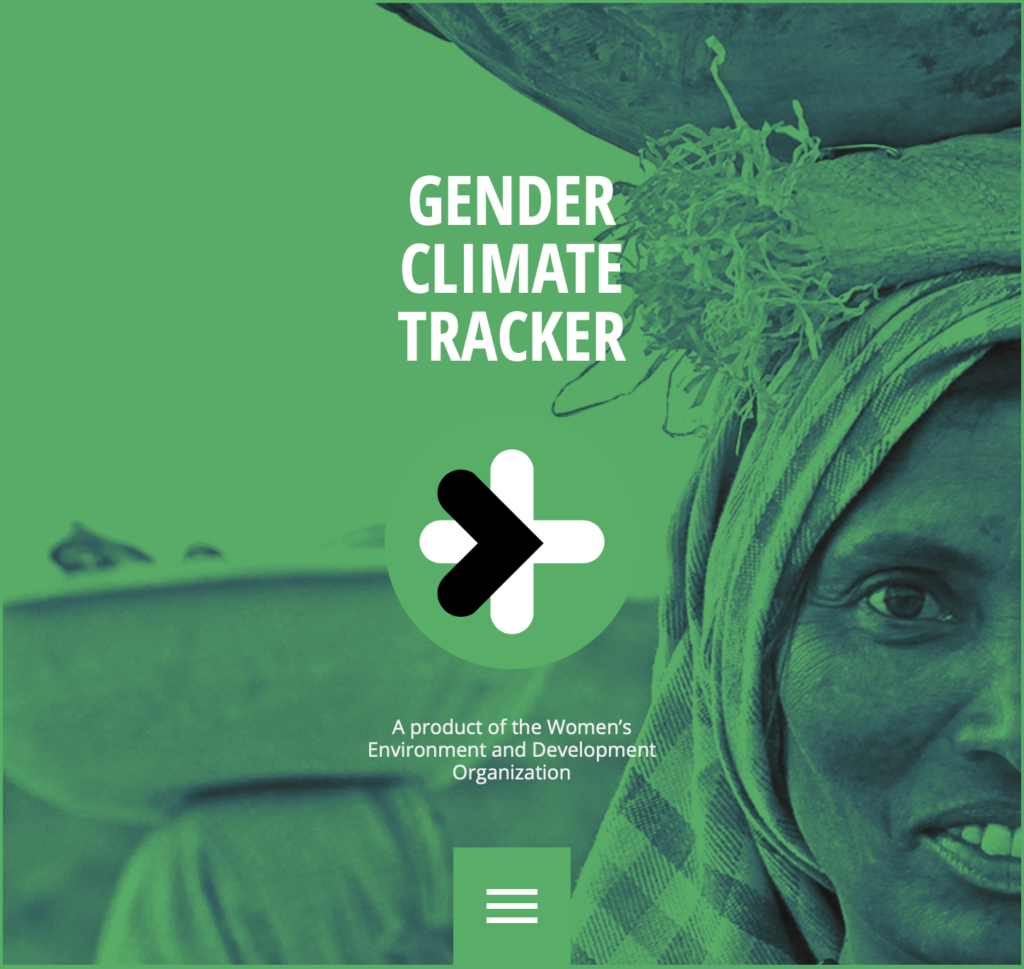 Launched in 2016 by the Women’s Environment and Development Organisation (WEDO), the Gender Climate Tracker app and online platform provides experts, practitioners, decision-makers, negotiators, and advocates with easy, on-the-go access to the latest and regularly updated information on policies, mandates, research, decisions, and actions related to gender and climate change.

By providing easy access to this information related to gender and climate change, the app empowers decision-makers and advocates alike to translate policies into action and hold governments’ accountable. In the palm of their hand, they can source facts and figures on women’s participation and leadership and clearly demonstrate where the gaps are on a country-level. 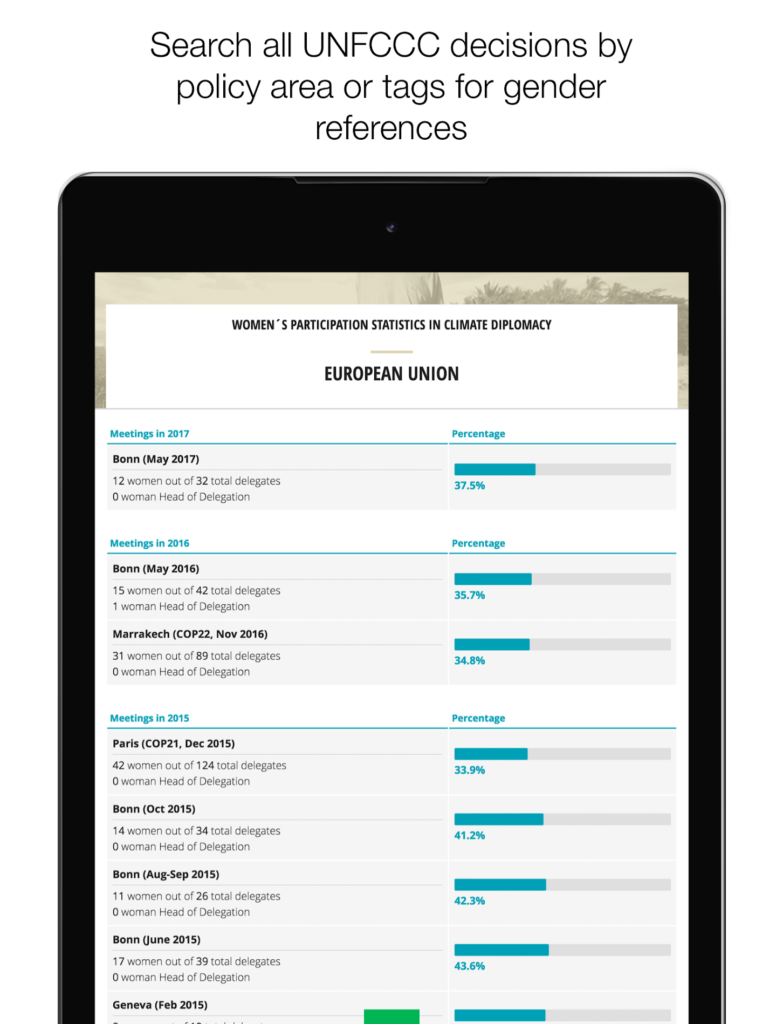 As WEDO Director Bridget Burns highlights, “Successful implementation that leaves no one behind requires gender disaggregated data to identify the gender gaps and move away from tokenistic implementation of strategies by governments towards gender inclusion and well-being.”

The online platform is divided into three sections. The first gathers together gender mandates, which is a compilation of UNFCCC decisions that relate to gender equality. The second relates to participation and has updated statistics on women’s participation in climate diplomacy from 2008 to today, searchable by country or technical body. The third section is a list of country profiles that summarises national climate plans to evaluate how they address women’s human rights.

With a quick search, users can access all policy decisions made under the UN climate negotiations that include gender. There is also a space for additional resources on gender and climate change, including quick overviews of the research that informed the app. 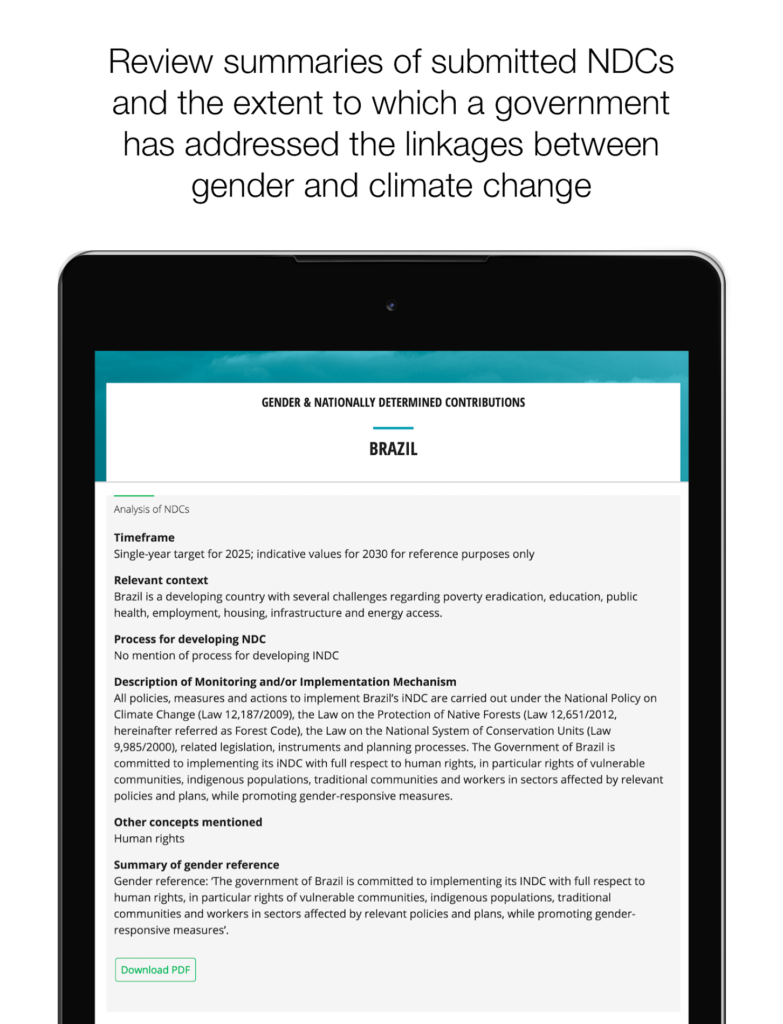 The Swiss Development and Cooperation (SDC), a key supporter of the project, emphasises that “Having access to information is key for engaging meaningfully in the process of finding gender-just climate solutions.” For them, “The Gender Climate App guides our negotiators to lay the foundation for gender-just climate solutions on a policy level. Gender-informed policies in return, lay the ground for gender-sensitive climate actions which are more likely to be successful.”

The app also encourages feedback from experts, which strengthens the project’s outreach, impact, and support. This connection, between national-level policy and planning and the implementation on the ground, makes the Climate Gender Tracker a well-rounded resource that brings visibility to gender and climate issues and collates complex information with clarity.