The Feira Preta and PretaHub initiatives are turning identity into power and highlighting Brazil’s Black talent to make business a fair game.

A keen dance and music lover, Adriana Barbosa used to wander around the streets of Vila Madalena, São Paulo’s bohemian neighbourhood where everyone who makes music (artists, ticket sellers, producers, dance crews) is Black — but not those who make money off it.

Unemployed and following her grandma’s advice (“Get busy, girl!”), in 2002 she decided to change that and co-founded Feira Preta (‘Black Expo’ in Portuguese), an event to bring together all the creativity and potential that she’d seen in São Paulo’s Black community.

The slogan was ‘The best of Black culture comes together in one place.’ There was a stage, food stands, live art and graffiti, photo and fashion exhibitions, a market, and a whole lot of music. It was a success. 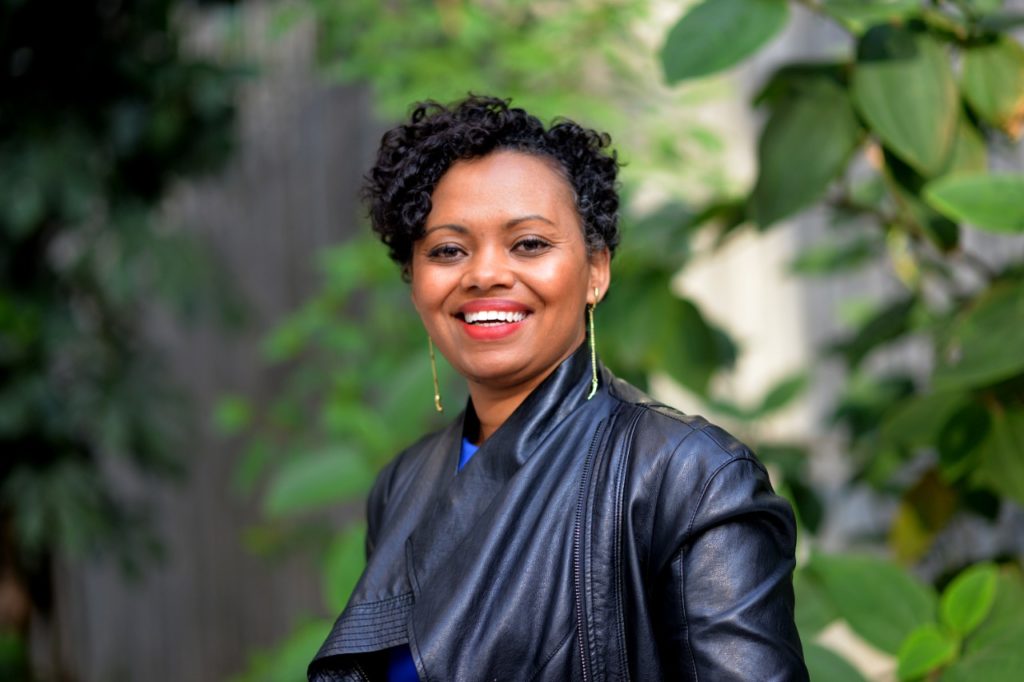 In the following years, people travelled to São Paulo to attend the expo and the model was replicated in other cities. Feira Preta quickly became the largest Black cultural and entrepreneurship event in Latin America, with 300 jobs created and 6.5 million Brazilian Reals generated in exhibitor revenue in 2019. For nearly 2 decades, Feira Preta has been showcasing and celebrating Brazil’s Black initiatives and talent, and in recent editions, it attracted over 700 exhibitors and 200,000 visitors.

Adriana explains how Feira Preta has become much more than an event. At the expo, “We strengthen our roots and transfer knowledge to future generations. We unite entrepreneurs who transform our identity into products, services and creative solutions.”

Identity is at the very heart of the fair, which helped Brazilians “identify as Black, call ourselves Black, and transform this identity into affirmative action, political positions, art, products and services.” Or in one word, power.

Adriana didn’t stop there. Through the work of the Instituto Feira Preta, what used to be a single annual initiative launched PretaHub, a platform and accelerator for Black entrepreneurs that aims to fill the gaps in people’s entrepreneurial journeys all year round.

With over 50% of Brazilians identifying as Black or mixed-race, Brazil has the world’s largest Black population outside the African continent. Yet, Black consumers are still considered a niche market and entrepreneurs are underrepresented. In 2020, 32% of Afro-Brazilian entrepreneurs have been denied credit, and 82% of the country’s 14 million Black entrepreneurs are not currently registered in the formal economy.

PretaHub aims to help them overcome some of the biggest challenges they face such as denied access to credit, financial education, and technology. It offers training courses and exchange and networking sessions, and opens commercial channels across the country and Latin America.

The platform acts as an accelerator and incubator for Black talent and through several initiatives launched under the PretaHub umbrella: AfroLab, a business expansion programme, AfroHub, which optimises connections for growth, and Black Codes, a consultation strategy platform that helps businesses track diversity to strengthen the Afro-Brazilian market. 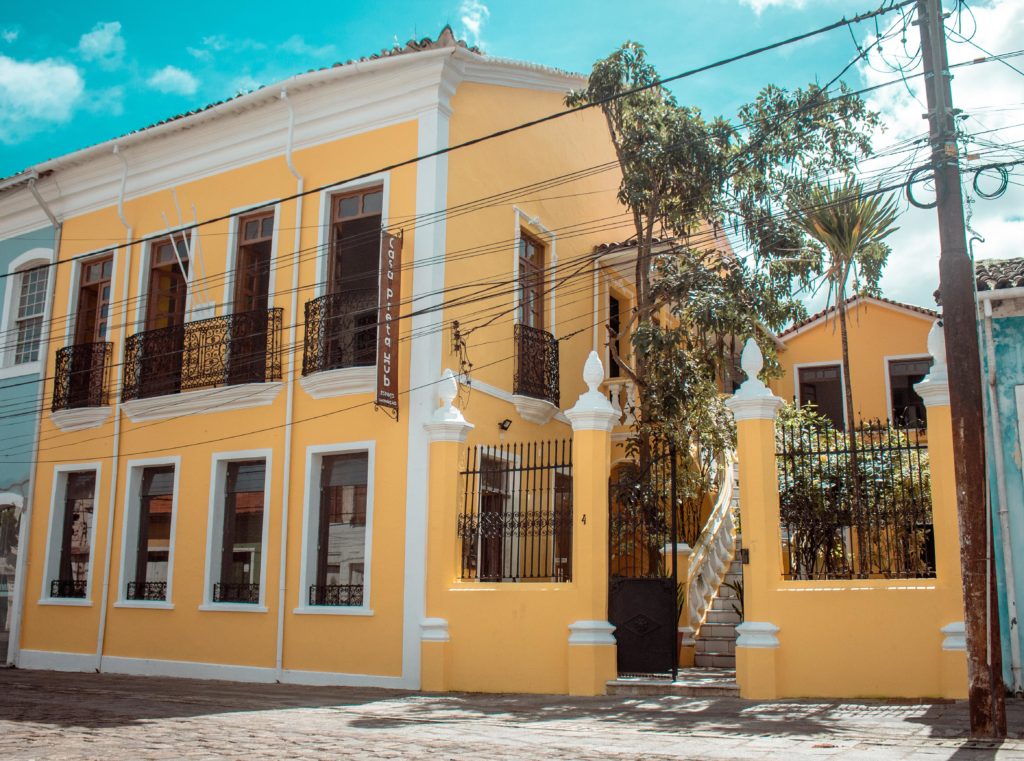 Finally, the PretaHub team carries out essential research to promote social inclusion and ignite systemic change — some of the data generated by the fair and the platform has been used in the Brazilian Senate during discussions over a new bill on Black entrepreneurship. 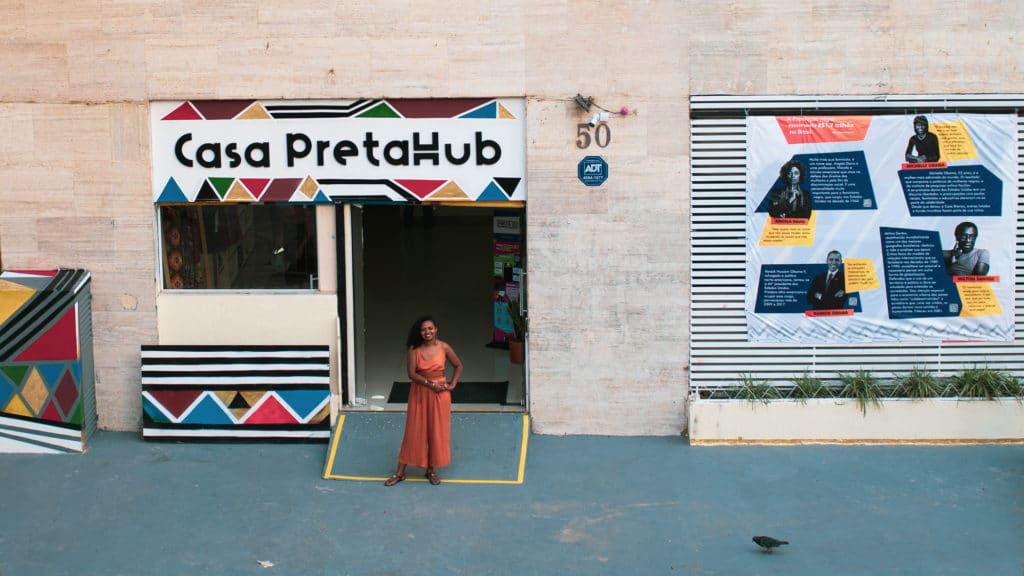 You don’t have to record your podcast in the kitchen here, but you can if you want to. Photo: Terra Preta Produções

Adriana’s efforts have always been especially focused on Black and Indigenous businesswomen, who were hit the hardest by the pandemic — in 2020, 36% of them had to shut down their businesses indefinitely (21% of white female entrepreneurs are in the same position.) And yet, she wants her work to turn the narrative from struggle to hope:

“Black women can’t only be resisting. We must be able to dream too. Our lives can’t be marked only by fighting and survival. We can have a good life, filled with joy and lightness. Seeing a Black woman in a prominent position makes other Black women allow themselves to dream, because her success is theirs too.”

Feira Preta is part of Éditodos Economic Emergencies Fund, a Black-led fund that mobilised over 1.7 million dollars and provided resources to more than 680 Black and marginalised entrepreneurs all over Brazil. In addition to non-refundable, donated funds, entrepreneurs are granted credit to mitigate the effects of COVID-19, boost their businesses on social networks, access data service and wifi, as well as basic food baskets and therapy sessions to take care of their own wellbeing.

COVID-19 inspired Adriana to share her narrative of hope with a larger audience. In the summer of 2020, she started the podcast Superar (meaning ‘overcoming’ in Portuguese), which invites Afro-Brazilian entrepreneurs to discuss their experiences navigating the pandemic.

The champion for Black and women entrepreneurship has quickly become a reference in Latin America. In 2017, Adriana was named one of the Most Influential People of African Descent (UN/MIPAD) and one of the 50 most influential Black people under 40 by the Obama Foundation. She’s also been an Ashoka Fellow since 2018.

Her Afrolab For Them initiative, aimed exclusively at entrepreneurs who identify as women, has expanded outside Brazil and supported entrepreneurship in Bolivia, South Africa and most recently, Colombia. In partnership with Manos Visibles and Mercado Libre, they created a cultural exchange and immersion programme to promote exchange between Brazilian and Colombian Indigenous and Black businesswomen. The plan is to keep embracing more founders to nurture their “creative and inventive powers” and help them share them with the world.

Bogotá has a new phone number for men who want to hang up on machismo and prevent domestic violence.  ...
See more
Share this project

Bogotá has a new phone number for men who want to hang up on machismo and prevent domestic violence.  ...
See more