If COVID left you feeling down in the dumps, send in the clowns!

It goes without saying that communities around the world have been deeply affected by the impact of the coronavirus, both physically and mentally. But in the city of Beirut, the global pandemic is just one of the major events in the last few decades that has shaped life there.

Before its civil war in 1975, Lebanon was a country once thought of as the Switzerland of the Middle East. Yet after 15 years of civil war, subsequent political unrest and a financial crash, the country is marred with instability. So when COVID-19 hit in early 2020, followed by the Beirut explosion in August, life became even harder as families were torn apart through isolation and death.

Despite this, clowns like Sabine Choucair, Co-founder of Clown Me In, have taken to the empty streets during COVID lockdowns to bring play and laughter to Beirut residents. 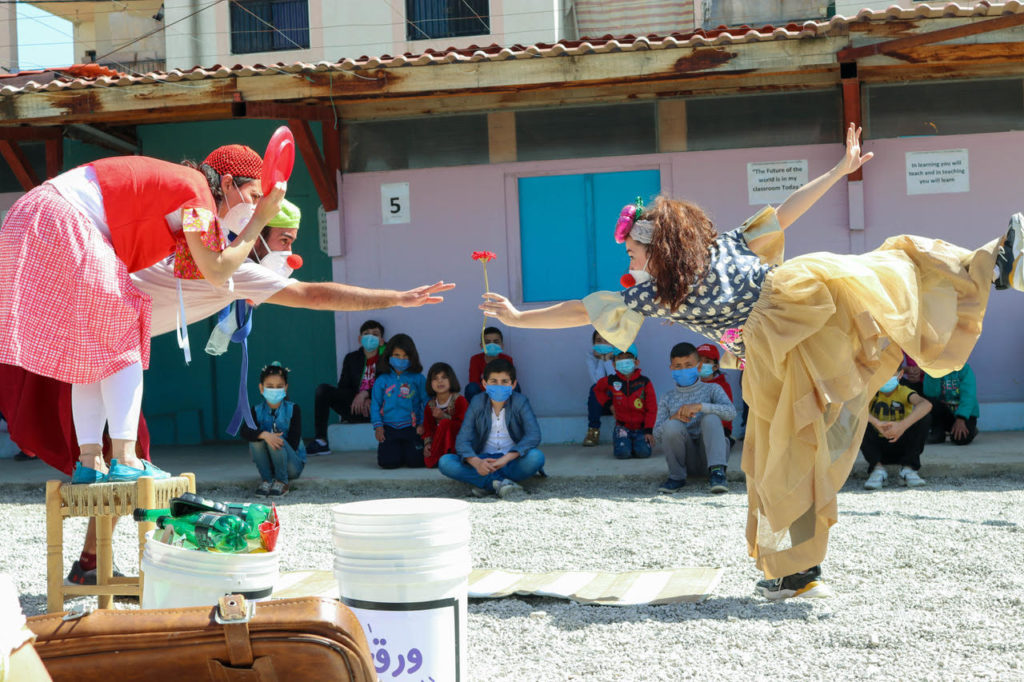 Formed in 2008, Clown Me In is a Lebanese NGO that works locally and worldwide to help share laughter where it’s needed using performance, workshops, and therapy. While clowning can seem like an unusual career choice, knowing the positive impact it had on her own life, Sabine was clear she needed to share this joy with her community: “Coming from a war zone, growing up during the civil war, I was more of an angry person until I discovered clowning – then things became better and lighter. That’s when I decided, this is what I’m going to do.”

Clown Me In work on the streets of Beirut captivating adults and children, and also craft pieces for specific audiences like those in refugee camps or disadvantaged communities. As Sabine explains, the organisation’s use of clown performance allows them to be “fun and light, but at the same time it’s deep”, meaning they can “tackle serious issues and problems in a light way.” 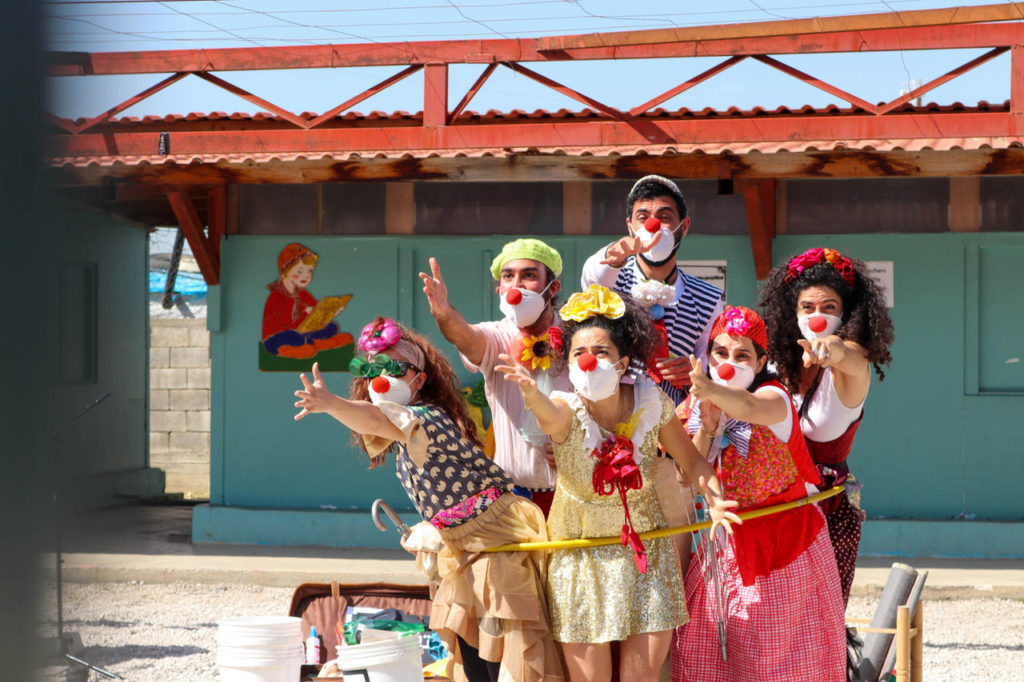 At the heart of Clown Me In’s work is their ability to heal through the power of laughter. Having studied social therapy at East Side Institute, New York, alongside her performing arts studies in Beirut and London, Sabine describes herself not just as a storyteller or performer but also as a humanitarian clown. This approach touches the hearts of their audiences, and can move them in extraordinary ways. Feedback from one show noted: “There was a little girl who simply stopped talking after the explosion. She came to see the show and ran back to her house and told her dad all about it. She talked!”

As COVID-19 infections rose throughout 2020 and 2021, live street performances became less feasible. As an alternative, Clown Me In has been showcasing their skills and bringing laughter online through their ‘Clown Vaccine‘ video series, created in response to the roll-out of the coronavirus vaccine in Lebanon.

“There was a total lockdown everywhere in the world. Many people were against the vaccine and had thoughts and questions about it,” explains Sabine. “So, since we always take on current issues and tackle them through clowning, we thought we’d do a video about it.”

While this isn’t the first time Clown Me In have taken to the internet to spread some joy, this project felt different as it was the first time many of them had gathered in months. Furthermore, the issues explored and voices raised in the video are all honest opinions of the group’s local community. Sabine recalls, “I enjoyed the research beforehand when we were speaking to people who were for and against the vaccine; it was great just to understand the different points of view.” 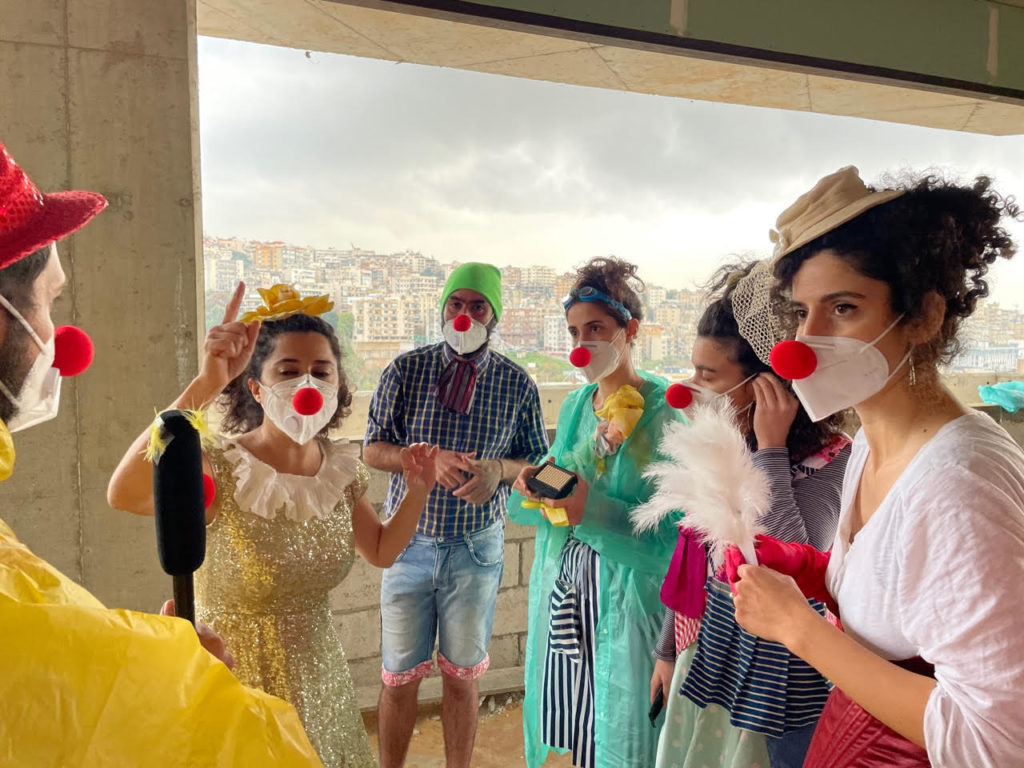 This online series uses comedic characters to showcase the cross-section of community opinions. For example, one character claims the vaccine makes you emit 5G, while another complains a vaccinated society would no longer have any use for face masks. By blending real-life concerns with both light and dark humour, Clown Me In begins a conversation with the viewer in a way that provides comic relief to a serious and controversial topic. As Sabine describes, “using clowns in this context we can make fun of every thought about the vaccine and show every point of view, without making anyone look bad but us.”

The clown troupe has received enthusiastic feedback across social media platforms (most comments are in Arabic), though it’s not always 100% positive. Sabine adds: “We also got people who were angry saying we were telling people to get the vaccine or that we were inviting them to die.” Such heated reactions to their performance captures how Clown Me In creates space for difficult discussions.

Using social media to start a discussion and share laughter when these platforms are often blamed for spreading misinformation is another ingenious way Clown Me In uses the tools they have to engage with their community during unsettling times. Though the video’s performances are in Arabic and French, English subtitles and recognisable characters make the performance relevant and relatable to people around the globe. Using online platforms also enables the group to talk about local issues within Lebanon and still impact the rest of the world. Their humour even made it to the UK, with one viewer from Bristol saying, “I love it! Dark and light at the same time.”

The Clown Vaccine series is just one example that highlights Clown Me In’s joyous effect on their audience and community, but their story doesn’t end here. Wherever you encounter this troupe’s performance, you’ll be presented with an offer to join in the discussion and play; and hopefully, your response will be ‘Clown Me In!’ “Our long term plans are to keep doing socially engaged theatre with clowning in Lebanon, for everyone,” Sabine adds. “Our main plan is to keep fighting and fight with laughter.” 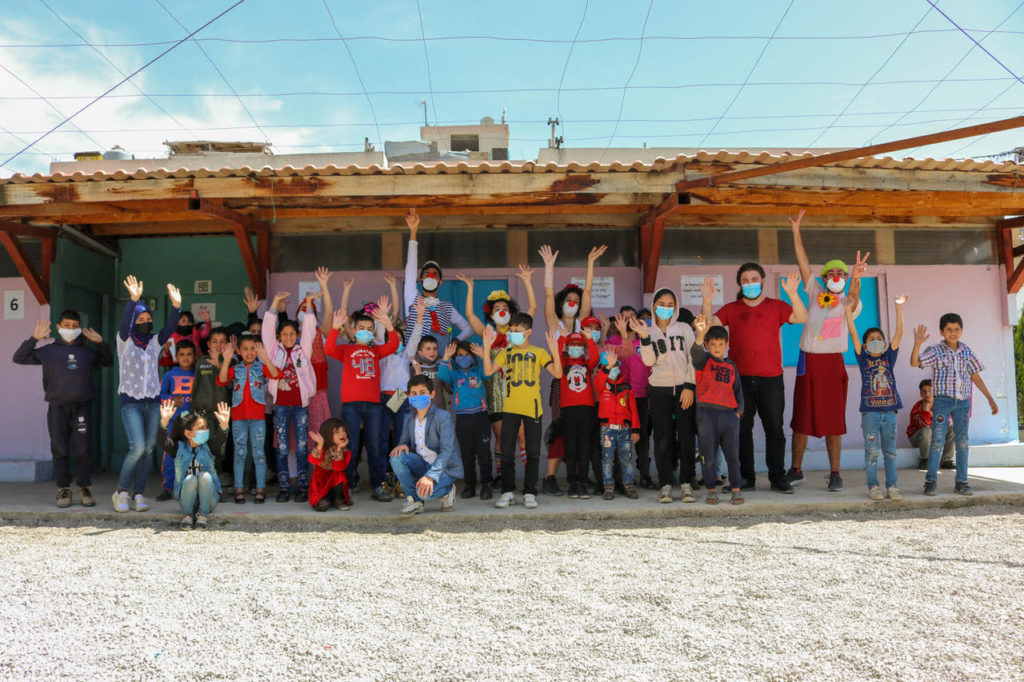 AtlasAction: If you would like to help Clown Me In spread laughter and joy where it’s needed most consider donating to their cause. Or to keep up-to-date with their latest projects subscribe to their newsletter.

Europe’s densest neighbourhood, die-hard champion of authenticity and diversity, is starting to tell its own story in its first co-created...
See more
Italy (Rome)
Italy (Rome)

It’s 2002 and in a large square just streets away from the Colosseum, market stalls line up to sell their...
See more 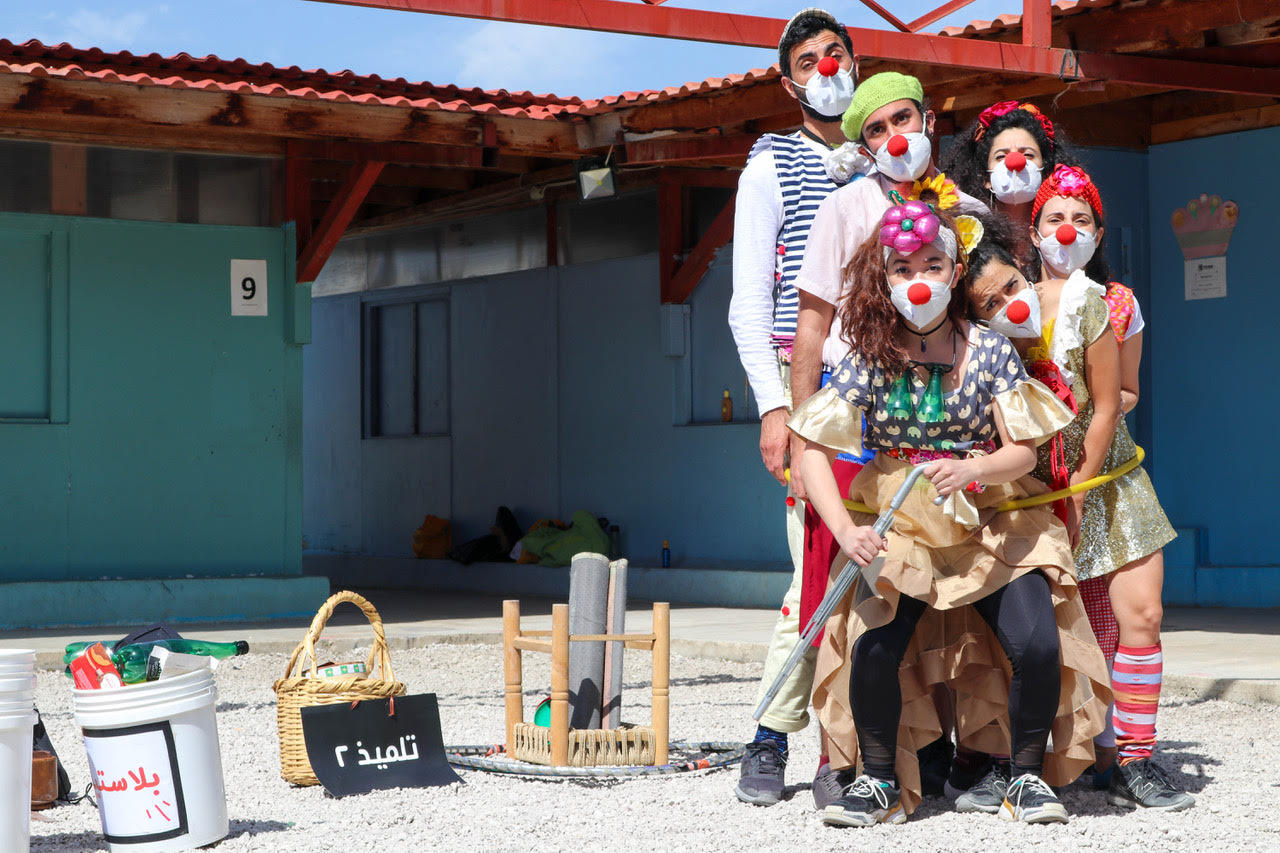 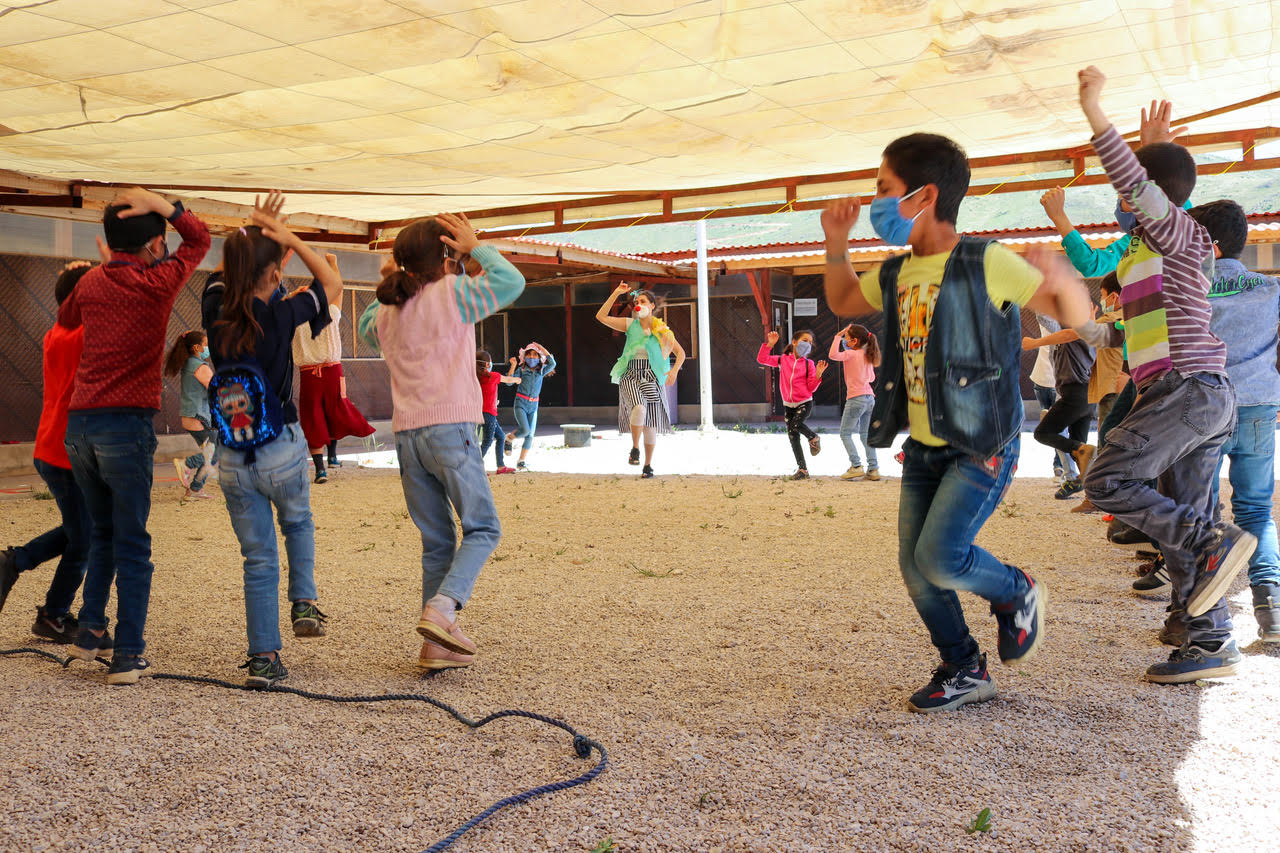 Europe’s densest neighbourhood, die-hard champion of authenticity and diversity, is starting to tell its own story in its first co-created...
See more
Italy (Rome)
Italy (Rome)

It’s 2002 and in a large square just streets away from the Colosseum, market stalls line up to sell their...
See more