Welcome to the future of recycling. A waste-sorting AI robot that can tell a Coke bottle from a Pepsi one? It could only be more impressive if it apologised every time it was Pepsi.

In a lab in Louisville, Colorado, AI and robotics pioneers AMP Robotics are modernising the world’s recycling infrastructure, recovering and reclaiming raw materials for the global supply chain – in a cost-effective move that’s also good for the planet. And they’re doing it with robots that use the same kind of logic and perception as human beings.

“As a kid, I was fascinated by Transformers, Saturday morning cartoons like the Jetsons and the robot tales of Isaac Asimov.” – Matanya Horowitz 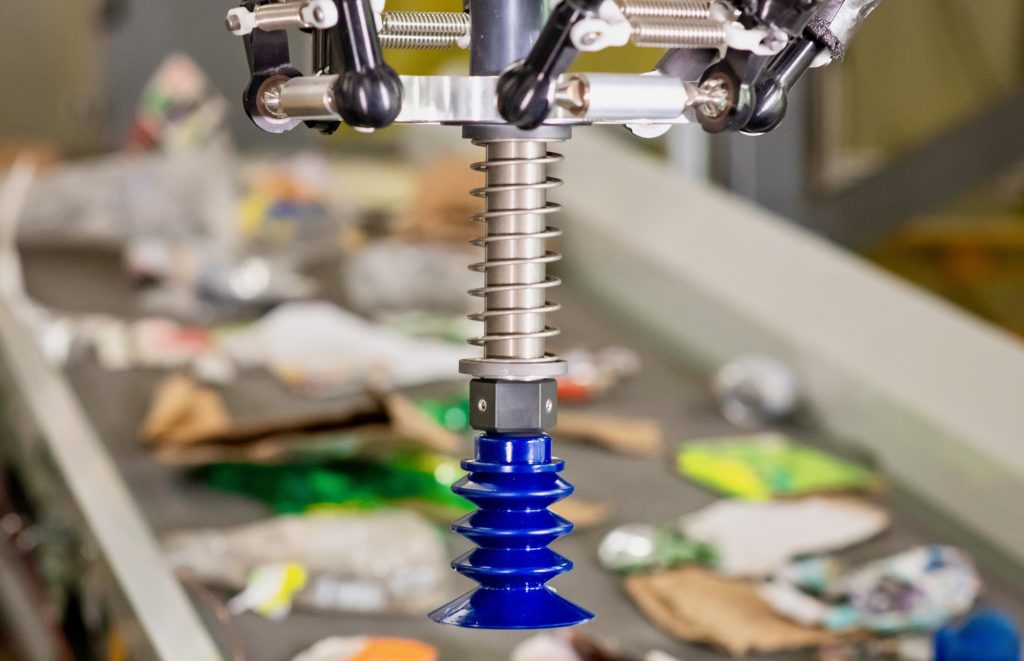 Each year, more than $200 billion worth of recyclable materials goes unrecovered globally. Paper, plastic and metal is lost in landfills; its value eroded by the cost of manual labour to identify, sort and recover the materials. But now AMP Robotics is automating this. Their technology recovers materials, containers and packaging for raw material processing, running 24/7 at superhuman speed. 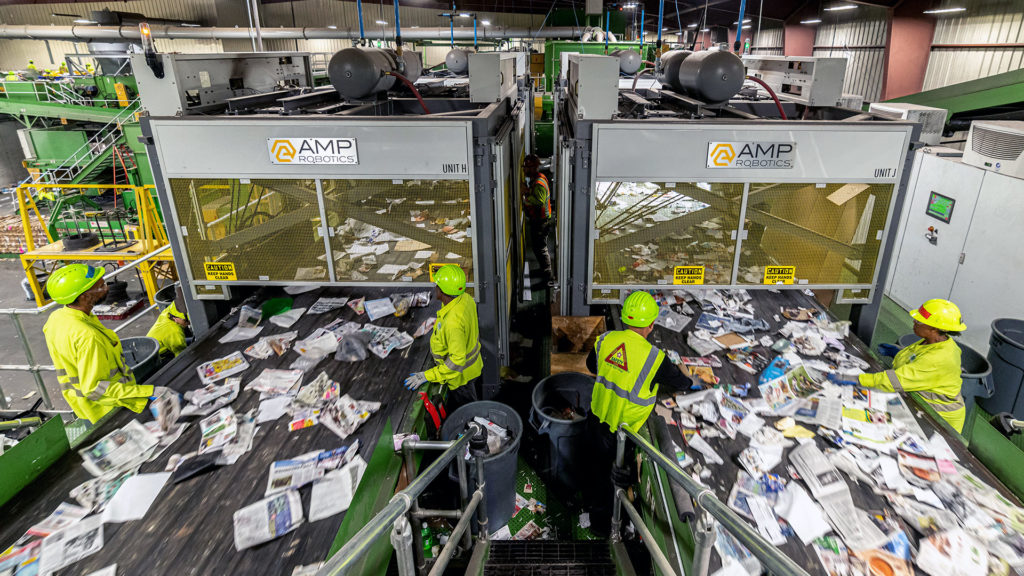 Robotics-lover Matanya Horowitz formed the Colorado company in 2014 with the mission of reimagining the fundamental economics of recycling: “As a kid, I was fascinated by Transformers, Saturday morning cartoons like the Jetsons and the robot tales of Isaac Asimov, and went on to study robotics,” he tells us.

And just like the shapeshifting Transformers, Matanya is transforming trash into value. Optimus Prime would be proud.

While pursuing a doctorate at Caltech, Matanya was active in several DARPA military challenges to develop better robotic arms and humanoid robots that could perform human-like tasks in dangerous situations. “These experiences gave me a deeper appreciation for the sophistication of human behaviour,” he explains. “I saw how powerful computer vision was becoming and began looking at industrial applications where these technologies could be most useful.”

Recycling was the right fit for Matanya for a number of reasons – not least because “no one else was working on it”. He recognised the industry was ripe for change after visiting a materials recovery facility and seeing how demanding and wasteful the processes can be. “Solving the challenges meant addressing a critical and unmet need that combined my passion for computer vision and robotics with a desire to help the environment.” 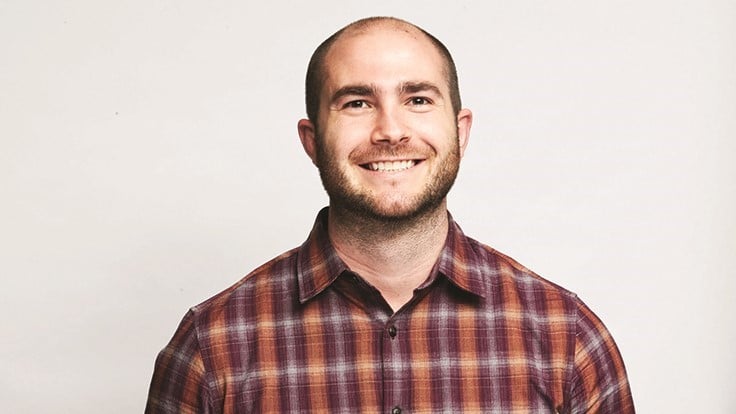 AMP’s AI technology applies computer vision and deep learning to guide high-speed robotics systems to precisely identify and differentiate recyclables found in the waste stream – in the same way a human does. The machine-learning algorithms are so good they can sort by colour, pattern, size, shape, opacity, consumer brand and more; recognising patterns and storing data.

The software has been shown millions of images of the items that its robots might come across as they separate recyclables from landfill, which means it can even tell you how many of the coffee cups are Starbucks, with an accuracy rate of 99%. 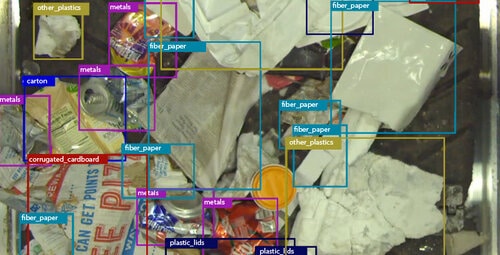 The AMP system is currently being deployed in North America, Asia and Europe, with its most recent installations in the UK and Ireland. In 2020, the company received recognition from Fortune’s Impact 20, Forbes’ AI 50 and Fast Company’s World’s Most Innovative Companies. In that one year alone, AMP identified and sorted their one billionth piece of material over a 12-month period, representing a meaningful environmental metric in the reduction of greenhouse gas emissions by approximately half a million metric tonnes.

To give you an idea of how much this is (and it remains an abstract notion for most of us), one tonne of carbon dioxide is the average emission of one passenger on a return flight from Paris to New York. The average American car emits about seven tonnes of CO2 in a year and the United States as a whole, over seven billion tonnes; and worldwide, almost 30 billion tonnes. 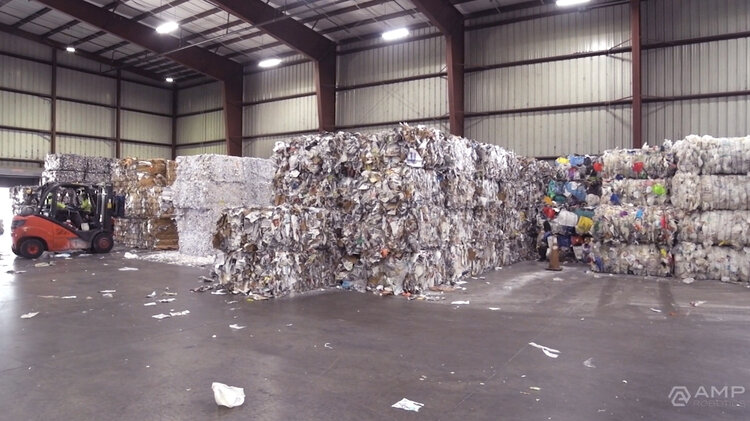 In 2020 AMP, also introduced a lease programme to make AI and robotics more attainable than ever, offering the benefits of automated sorting without the capital expense, and closed a large deal with Waste Connections solid waste services to deploy 24 AI-guided robotics systems across multiple locations in the US.

In 2021, they secured $55 million in funding to accelerate innovation and scale commercialisation. “The new capital will also support our expansion into new markets, domestically and internationally, across the waste management value chain, including producers and consumer packaged goods companies to help them achieve their recycled content and sustainability goals.” 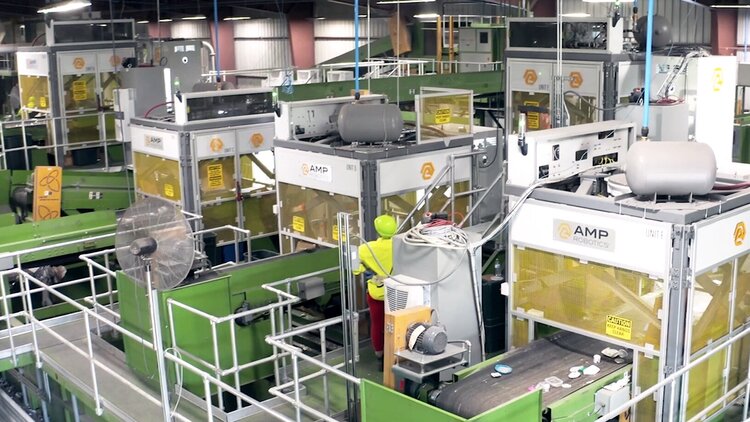 Demand for AMP’s AI and robotics technology has hugely accelerated recently as they saw a significant increase in orders and interest in deploying its technology on a larger scale. Since the onset of COVID-19, businesses have been turning to automation to keep employees safe amid social distancing requirements and navigate ongoing labour shortages. One solution: Let robots do the job.

The pandemic has also seen coffee pod sales swell as consumers stayed home. This created more material that can become new packaging. “Our technology can recognise and recover material as small as a bottlecap and as unique as a Keurig Dr Pepper coffee pod from complex material streams so that these materials may serve another productive life in the economy,” Matanya says. 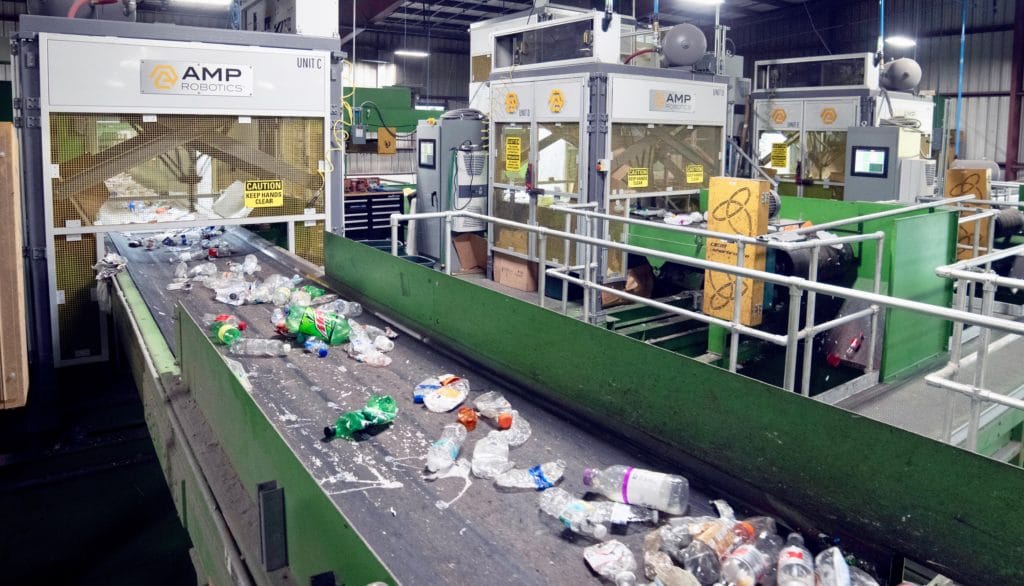 Next AMP wants to be a player anywhere a meaningful problem in recycling exists. “As compelling as our technology is today, we know we’re just getting started as we develop and enhance new AI and robotics applications for recycling and beyond.”

AMP wants to amplify the message that recycling is healthier than many might believe, and technology is only making it more so. “It’s an exciting time for the industry, and hopefully people continue to feel it’s worthwhile to do their part to recycle right. Recycling is a key part of the waste/materials management ecosystem, but it’s not a singular solution to big problems like climate change.”

Matanya adds that an article in The Atlantic puts it pretty well: “people should keep their enthusiasm for recycling alive and active – but they shouldn’t stop there.” In other words, make sure you prioritise reducing and reusing as well as recycling.

A cyborg future for our knees

Wearables, medical devices, AI and data come together in this lightweight exoskeleton for robot rehab. And it's been tested by former...
See more 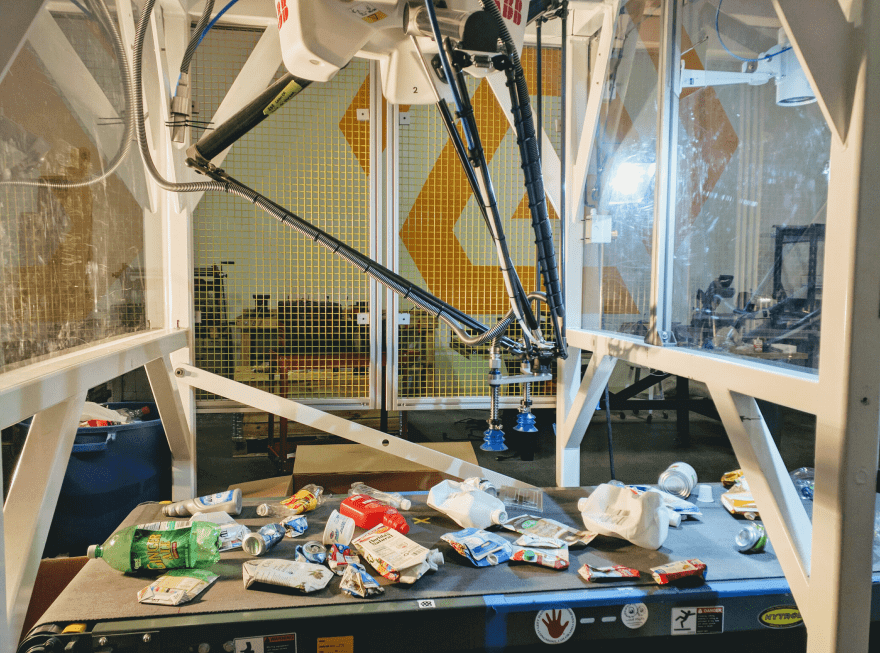 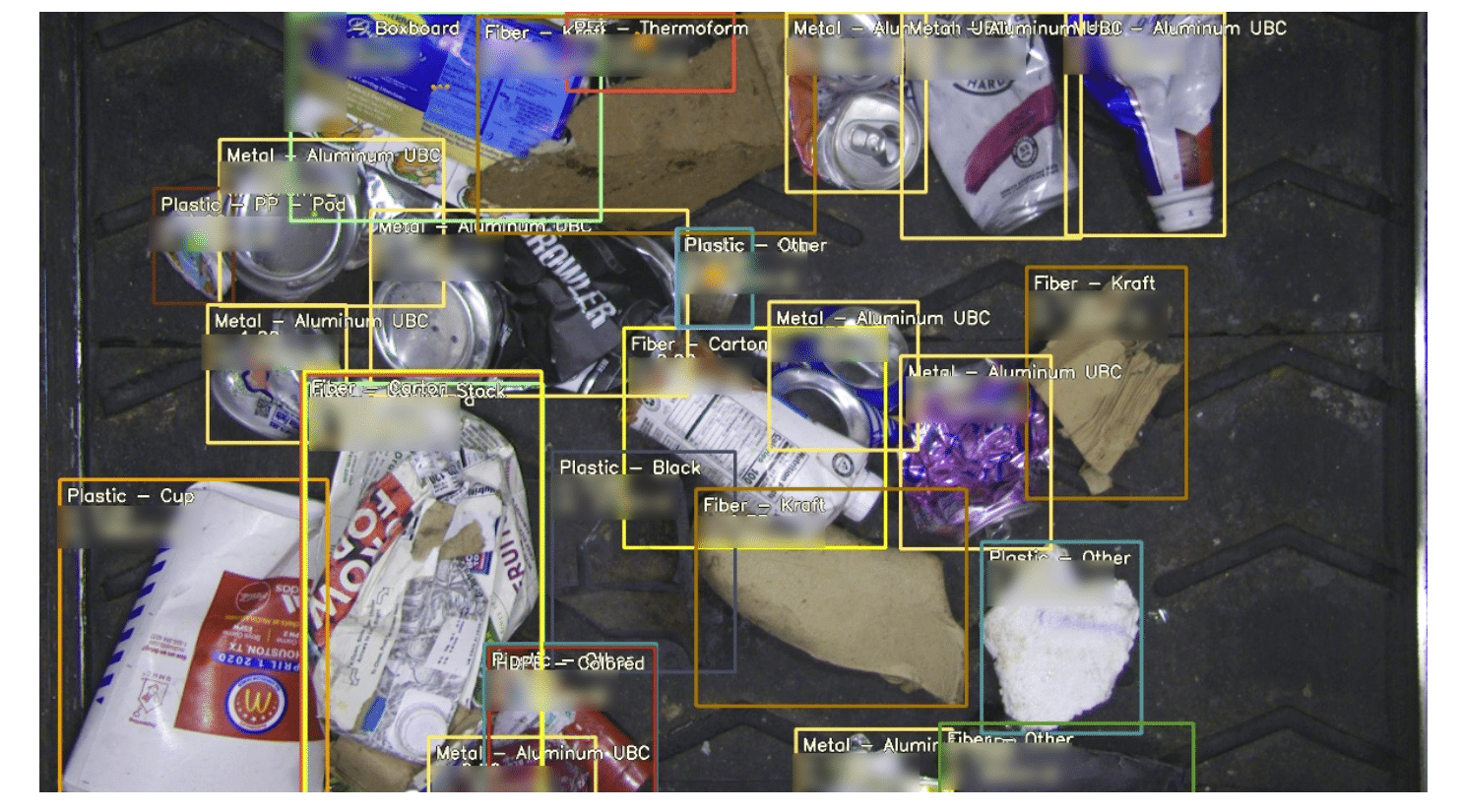 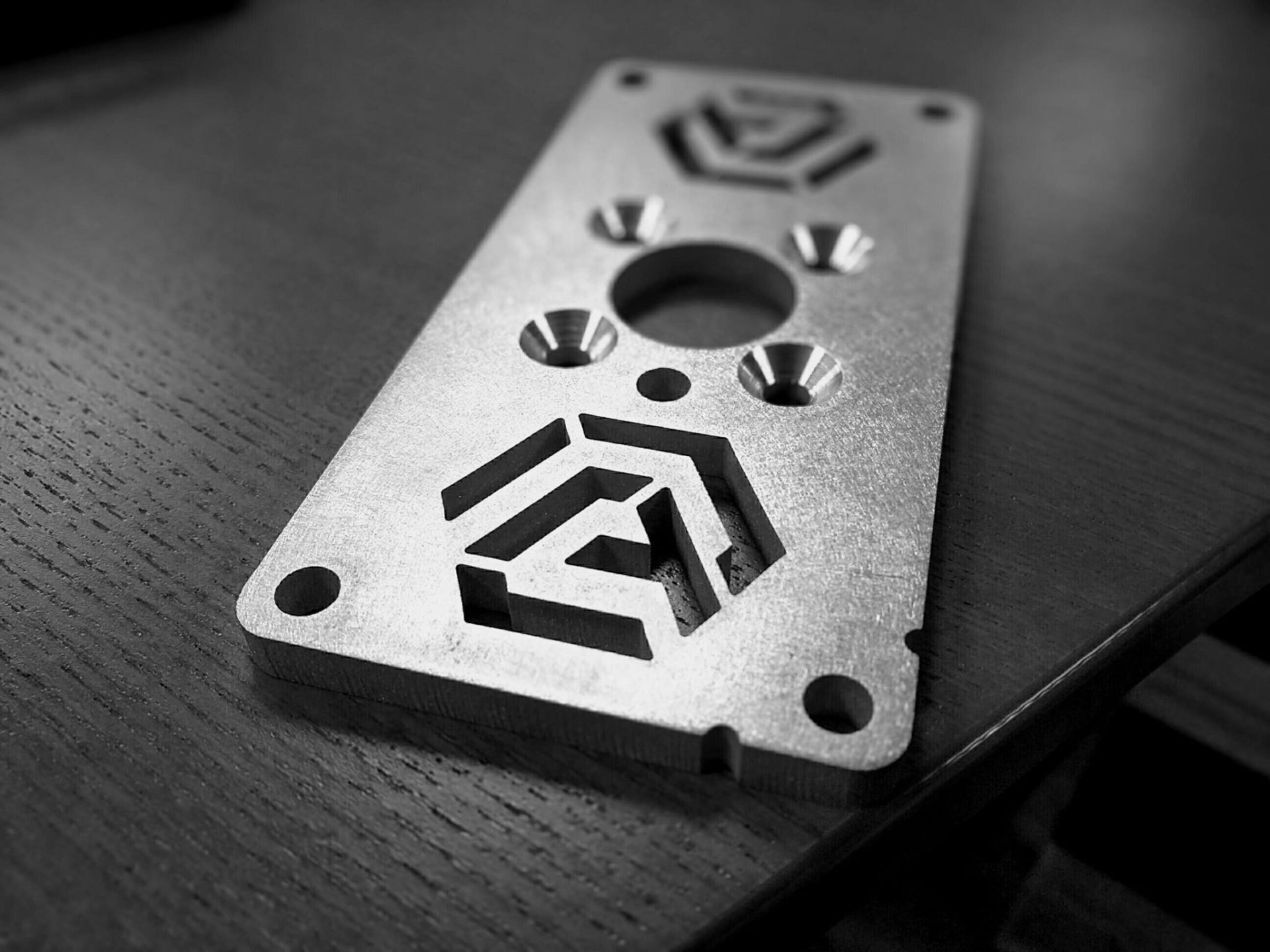 A cyborg future for our knees

Wearables, medical devices, AI and data come together in this lightweight exoskeleton for robot rehab. And it's been tested by former...
See more