Every night across the world’s former murder capital, young boys and girls study the four elements of hip-hop to transform a generation and rehabilitate a city.

“In Medellín, the hip-hop is about transformation. The lyrics are about the terrible things the artists have seen and how they want to transform their community.” Henry ‘JKE’ Arteaga

Henry Arteaga is sat in a classroom of a small high school in the Aranjuez barrio (neighbourhood) of Medellín, formerly the city’s most notorious. Kids of all ages mill about strip-lit corridors, lounging against walls adorned with polychromed graffitis of mythical figures. A cacophony of bass music spills out from the adjoining classrooms. 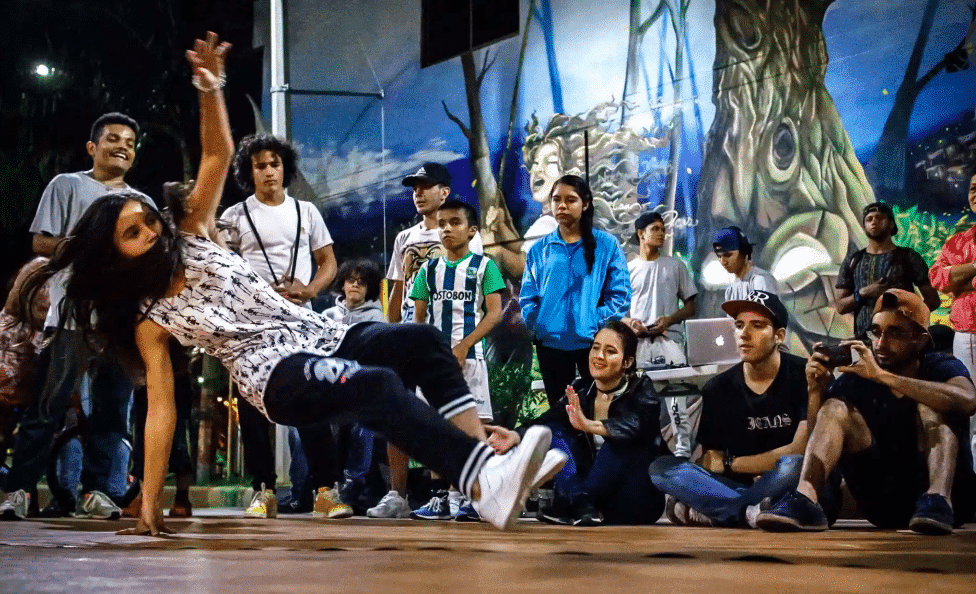 In one room an exasperated teacher attempts to coordinate some infants into a basic warm-up routine, while a few adolescent boys experimentally scratch away on some DJ decks. Next door a set of teens are being marshalled in some breakdancing exercises with all the intensity and precision of a military drill. And upstairs a group of twenty-somethings casually throw their bodies into gravity-defying contortions to a jacked-up remix of Notorious BIG’s ‘Kick in the Door’.

Every evening the school is taken over by one of Colombia’s most famed hip-hop groups, Crew Peligrosos, as part of an educational initiative coined 4 Elementos Skuela. The doors are opened to underprivileged kids from all over the city, and the chance to come and learn the four elements of hip-hop – breakdance, DJ-ing, rap and graffiti – with Colombia’s most skilled practitioners serves as a ready alternative to a life of drugs, violence and gang affiliation.

Arteaga is one of Colombia’s leading exponents of hip-hop and the founder and leader of Crew Peligrosos, going by the stage name JKE. He’s in his mid-thirties and dresses in loose-fit skater clothes and a snapback cap. He has chiseled features, a stocky but muscular physique covered in tattoos, and wears a perennially challenging and provocative stare. He’s the picture postcard of a Latino rapper. 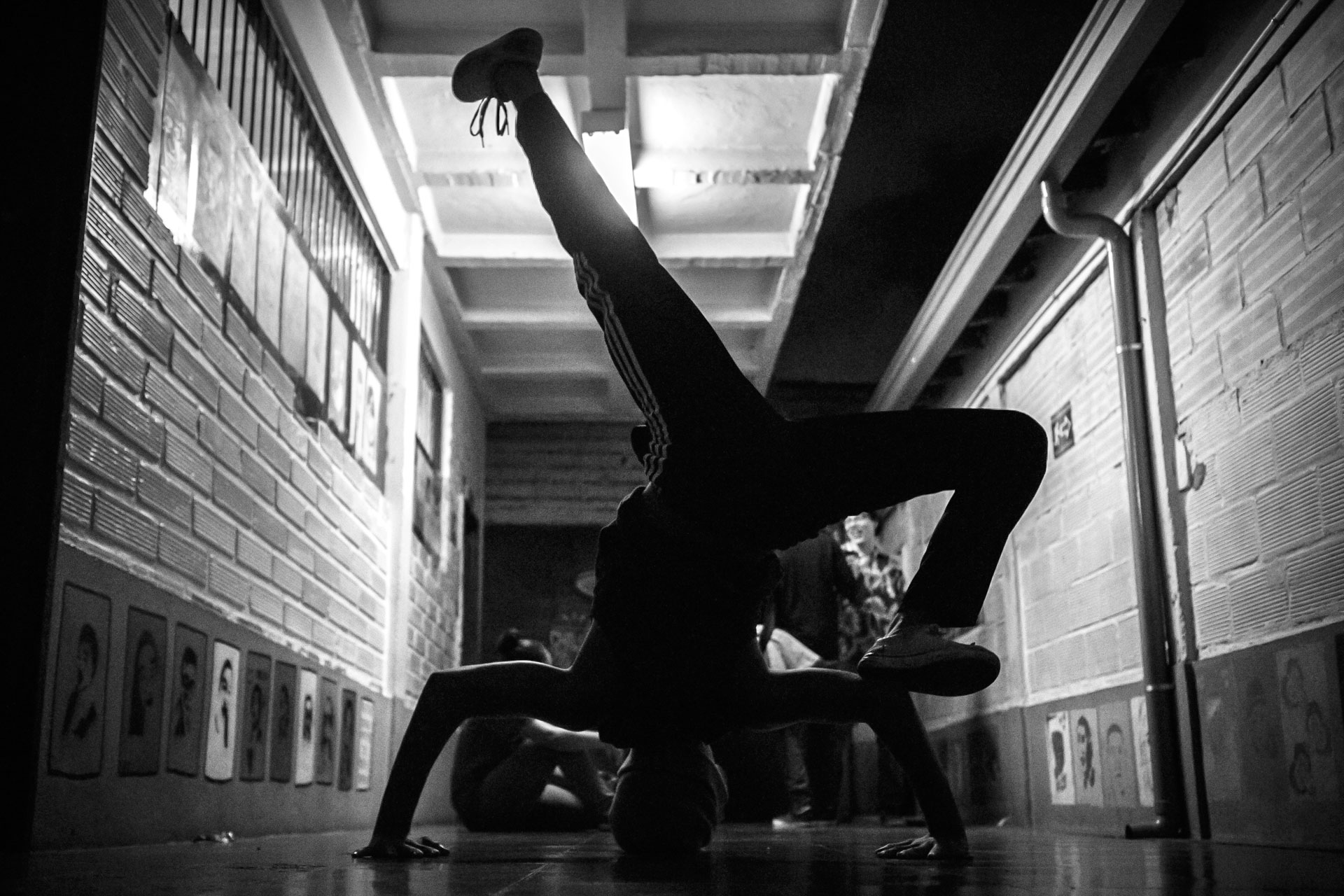 Some teenage boys sheepishly enter to ask JKE about practice times. The awe in which they hold him is tangible; he is their hero, that much is evident. “I’ve lived my whole life in this barrio,” JKE says, after they leave. “When I was growing up in the ‘90s, this was Medellín’s roughest neighbourhood.”

The Medellín of JKE’s youth was a daunting place; a city cursed by its geographical positioning at the crossroads of a number of cocaine-trafficking routes. In the ‘80s it served as the personal fiefdom of cocaine kingpin Pablo Escobar and soon became the world’s murder capital: in ‘91 Medellín witnessed 6,349 killings, a homicide rate of 380 per 100,000 citizens. Far from alleviating the turmoil, Escobar’s demise two years later left a deadly power vacuum as combos (gangs), leftist guerrillas and right-wing paramilitaries began a ferocious war over the drug and racketeering trades that would rage through to the early 2000s.

But the city has since undergone a meteoric transformation that has been branded the ‘Medellín Miracle’: in two decades it has metamorphosed from the most dangerous city on earth into a hotspot for international tourism and 2016’s winner of Singapore’s prestigious Lee Kuan Yew World City Prize.

The seeds of change were planted between 2004 and 2007 as Medellín´s forward-thinking former mayor Sergio Fajardo implemented a bottom-up regeneration plan aimed at the city’s poorest neighbourhoods. That was complemented by the Uribe government´s decommissioning of the paramilitary groups. By the end of Fajardo´s tenure Medellín’s murder rate had fallen to less than that of Washington DC, and has since dropped to a fifth of its 1991 peak.

But one unsung hero of the city’s transformation was a nascent generation of hip-hop artists, who began using the four art forms to rail against the culture of drugs and violence festering within their barrios. By the start of the millennium hip-hop collectives were popping up all around the city preaching non-violence and community empowerment, and starting social development initiatives such as street-art projects, artistic festivals and educational programmes for local children.

“The hip-hop culture in Medellín has been a key piece in the construction of the city’s collective imagination,” says Lina Botero, Medellín’s former Secretary of Culture. “Many young people in the city’s most troubled neighbourhoods found in music, dance or graffiti a way of living outside the circles of violence and poverty to which they were destined.”

One such artist was JKE, who in the ’90s found himself looking for a way out of the warzone he called home – Aranjuez. “Those tourists who come here to do the Escobar tours have no fucking idea what it was like back then,” he recounts with a steely grimace.

He had initially sought his escape through football but despite his natural ability was told he was too short to make it professionally. He subsequently moved into classical dance but says he wasn’t “white enough” to make it in what was an elitist artistic genre in Colombia. He eventually found his calling through the film ‘Beat Street’, a 1984 depiction of the birth of hip-hop culture in New York´s Bronx district, which spurred him to pursue the genre’s art forms and establish Crew Peligrosos in 1999.

As the group trained in the streets of Aranjuez they found many of the local kids eager to join in. The group saw the potential and in 2002 they founded 4 Elementos with the aim of giving the barrio’s children an alternative to their street vices. “The goal was to develop the person rather than just the artist,” says JKE. 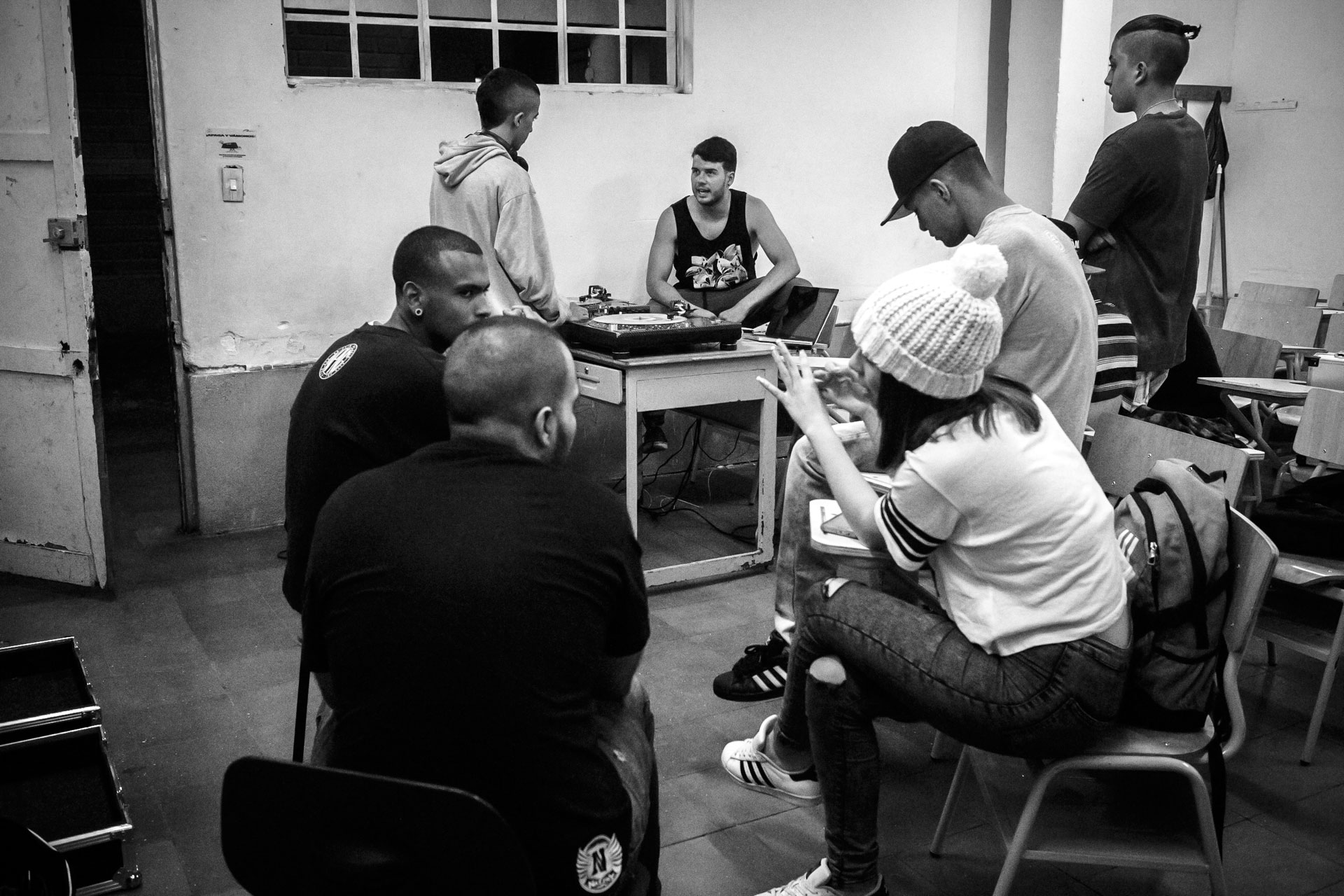 The school started life in one member’s house, but was soon overflowing with willing new students. The local high school offered up a classroom but when that too was promptly filled to capacity, Crew Peligrosos were handed the keys to the entire building on a nightly basis.

In the school’s courtyard, Marcela Arteaga, the school’s administrator as well as JKE’s sister, says: “JKE started the school to share his hip-hop skills with kids who wanted to learn. There were others who had the know-how, but at that time they were keeping it to themselves.” She interrupts herself to go maternally coax a 7-year-old down from atop the basketball frame. “He’s brought that mentality to the school, it’s all about knowledge sharing – students learn and they then become teachers themselves.”

In the years since its birth, 4 Elementos has gone from strength to strength, with attendance rising exponentially: to date, more than 4,000 kids have gone through the school and there are currently around 600 students on its roster, 40% of whom are girls. Most of the kids attend 3-4 times a week, with some coming every day. All 22 members of Crew Peligrosos are teachers at the school and contribute 10% of their salaries to run the initiative. The classes are free, there is no age limit, and every student has the chance to represent Crew Peligrosos if they develop their skills to the sufficient level.

“From 5pm-10pm everyday we have the local kids here creating, creating, creating; trying to improve themselves,” says JKE. “Previously they would have been out there destroying both themselves and the neighbourhood. Hip hop gave them an alternative.”

The school organises presentations, countrywide tours, and an annual festival, allowing the students to share their acquired knowledge with a wider audience. With help from the Miami-based ABC Foundation, Crew Peligrosos are currently expanding the initiative to the barrios of Palmitas, Manrique, San Cristóbal and El Retiro, with a wider goal of pushing it out to the rest of country.

“When my family moved to Medellín all I could see was drugs, violence and prostitution,” says 21-year old Zuleima Perez. “My best hope was to get married, have kids and find some basic job. This school allowed me to think bigger.”

Zuleima is the only female member of Crew Peligrosos, going by the stage name Z-Rock. She moved to Medellín 10 years ago after her family was displaced from nearby San Carlos, and has attended 4 Elementos for the past seven years; last year becoming one of its teachers. She came across the initiative at one of its public performances in the city centre. “I was blown-away by the show. I saw one girl performing and thought, ´that could be me´. I decided to attend the school, and was lucky to have my sister to take me as the barrio was too dangerous to walk around alone at night.”

Medellín’s overall homicide rate has fallen drastically since the turn of the millennium as a result of a variety of factors. Nonetheless since the year of 4 Elemento´s inauguration the number of murders in Aranjuez has dropped by 83%.

Other barrios have also cottoned on to the concept. As well as 4 Elementos, Medellín now boasts hip-hop schools in San Javier (Casa Kolacho) and Guayabal (La Gran Colombia), both of which teach around 400 kids

“Hip hop in the West is all about conquering and winning against other people; here it’s about community development,” says JKE. “It might derive from our indigenous roots, which is all about helping others and preserving the culture and the community.”

But progress is not the same as panacea. And as we leave the school one evening, JKE bemoans the widespread use of the ‘Medellín Miracle’ narrative to whitewash the city’s ongoing gang troubles. He recounts a turf war that broke out in the barrio two years ago, which resulted in 27 killings in one day yet went widely unreported.

JKE and 4 Elementos will nonetheless continue to tackle such problems at their roots. And if Zuleima is anything to go by, the cause lies in good hands. Asked whether she’s hankering for hip-hop stardom, she responds: “No. I want to teach. I want to help this school become international in order to give kids all over the world the same opportunity I’ve had.”

AtlasAction: Get in touch with 4 Elementos Skuela here.

Transforming the lives of older people? We want you! 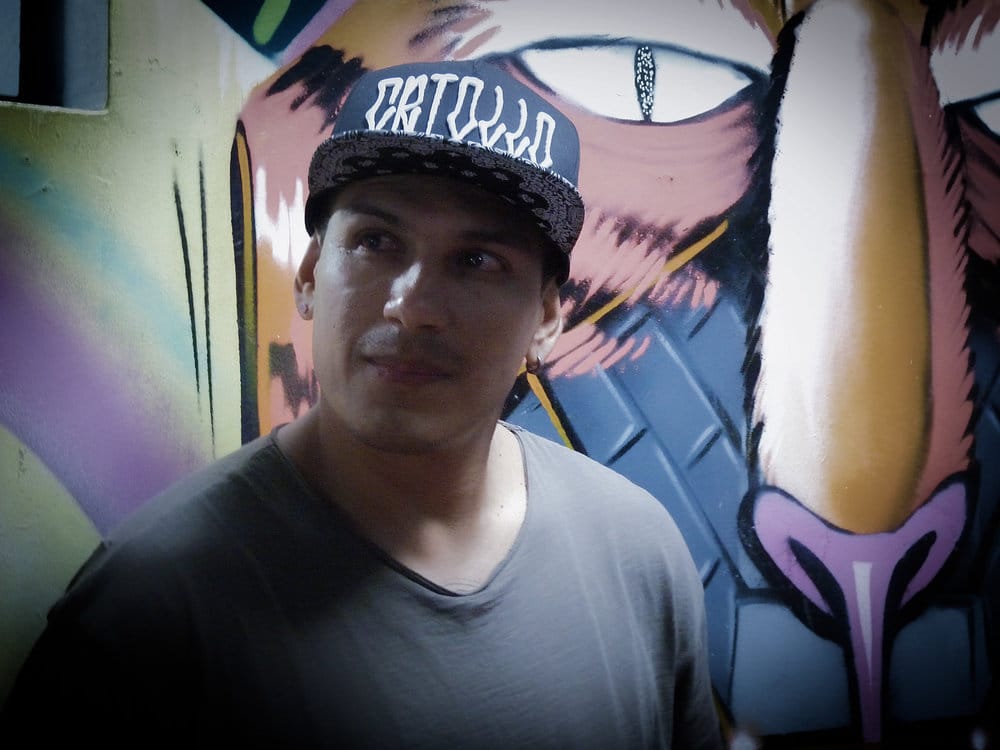 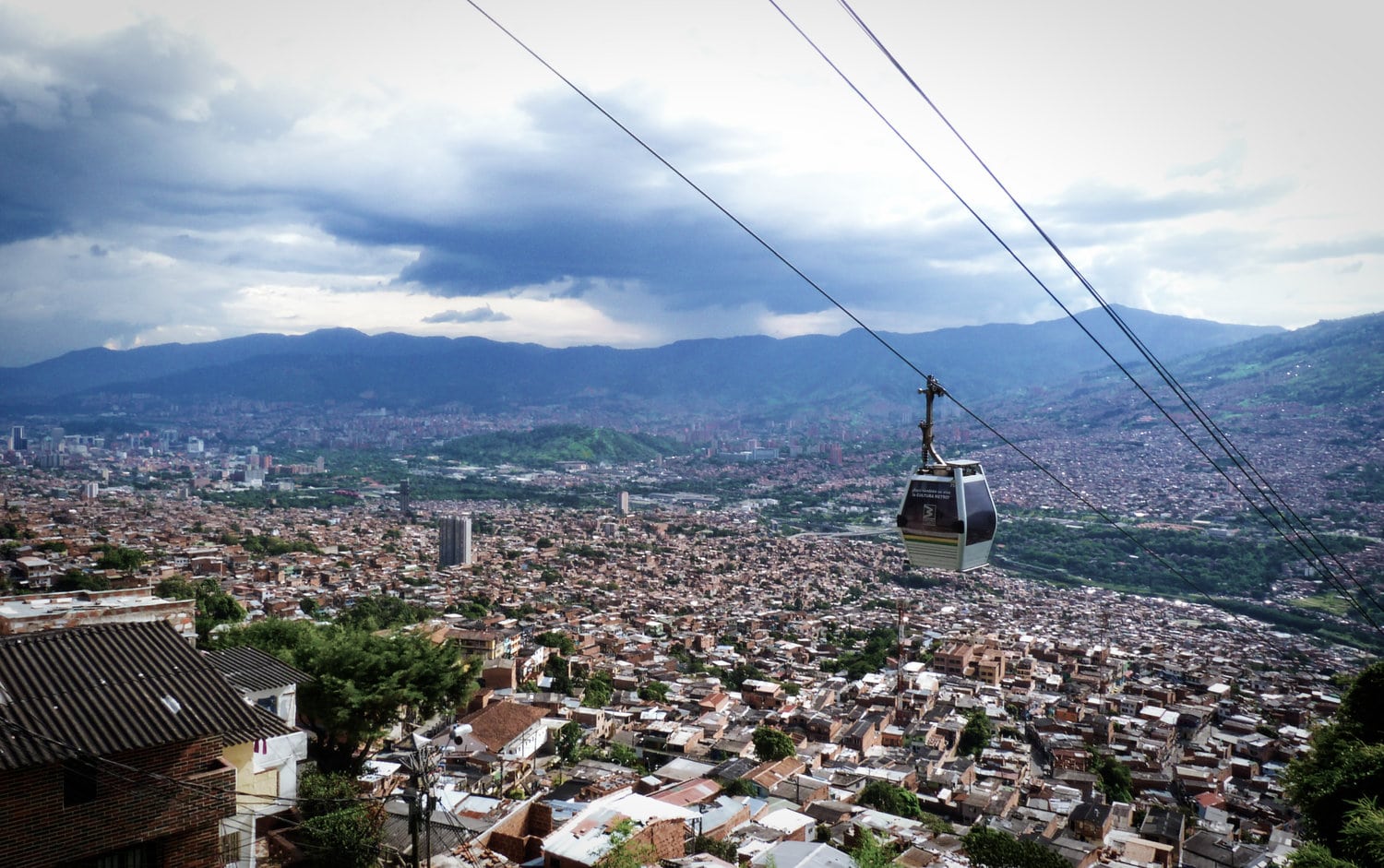 Opened in 2004, Medellin's gondola lift system was designed to reach some of the city's informal settlements on the steep hills that mark its topography 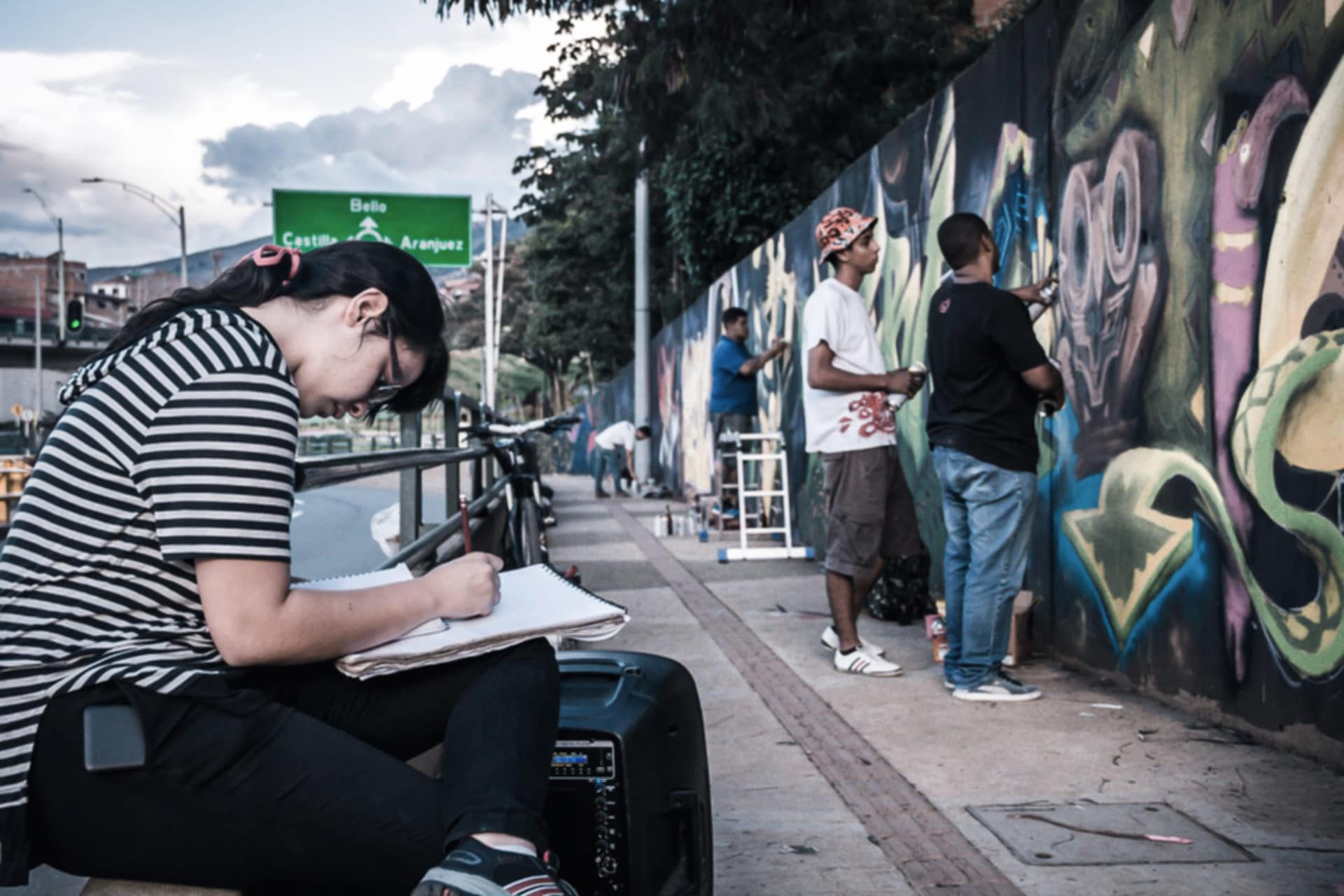 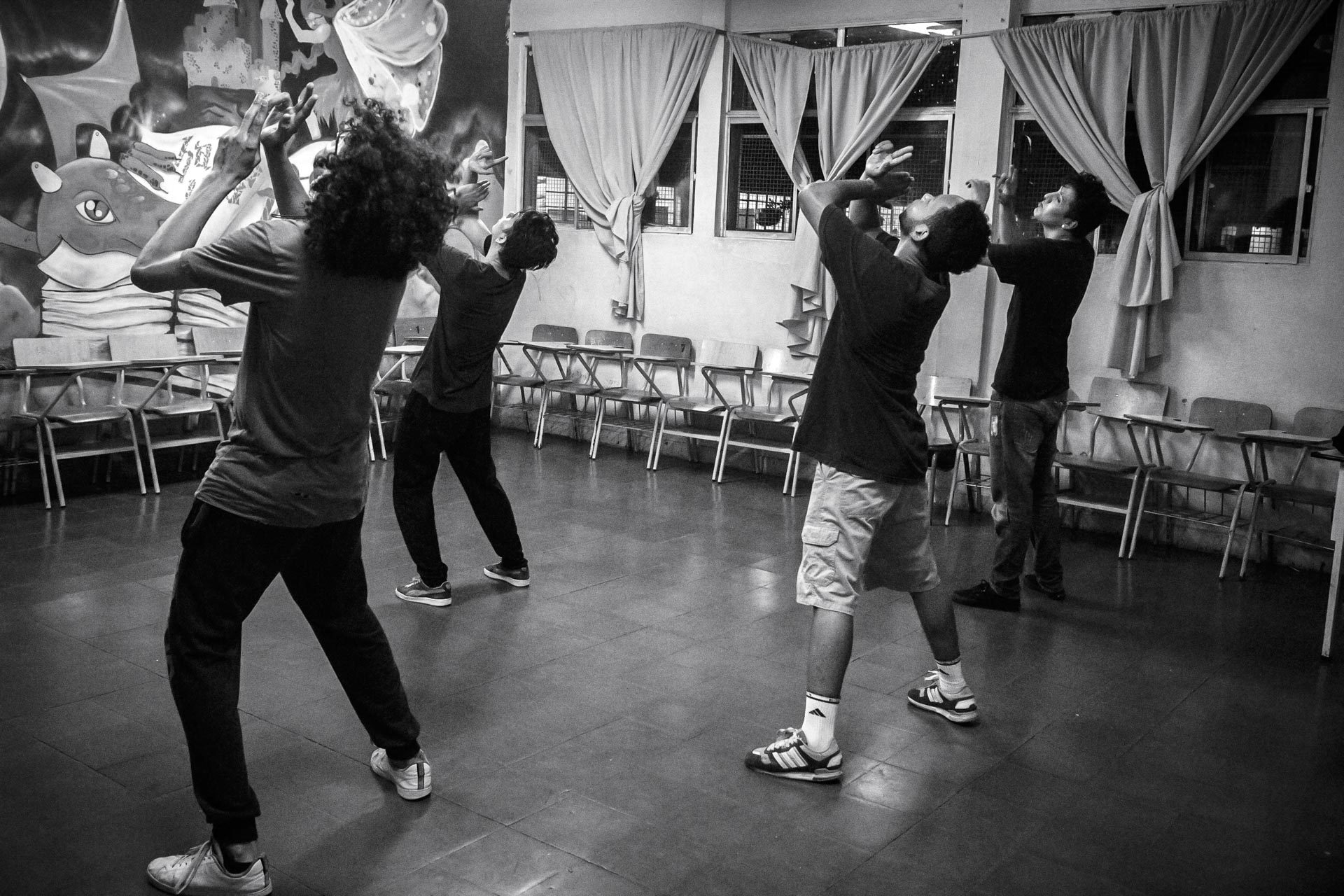 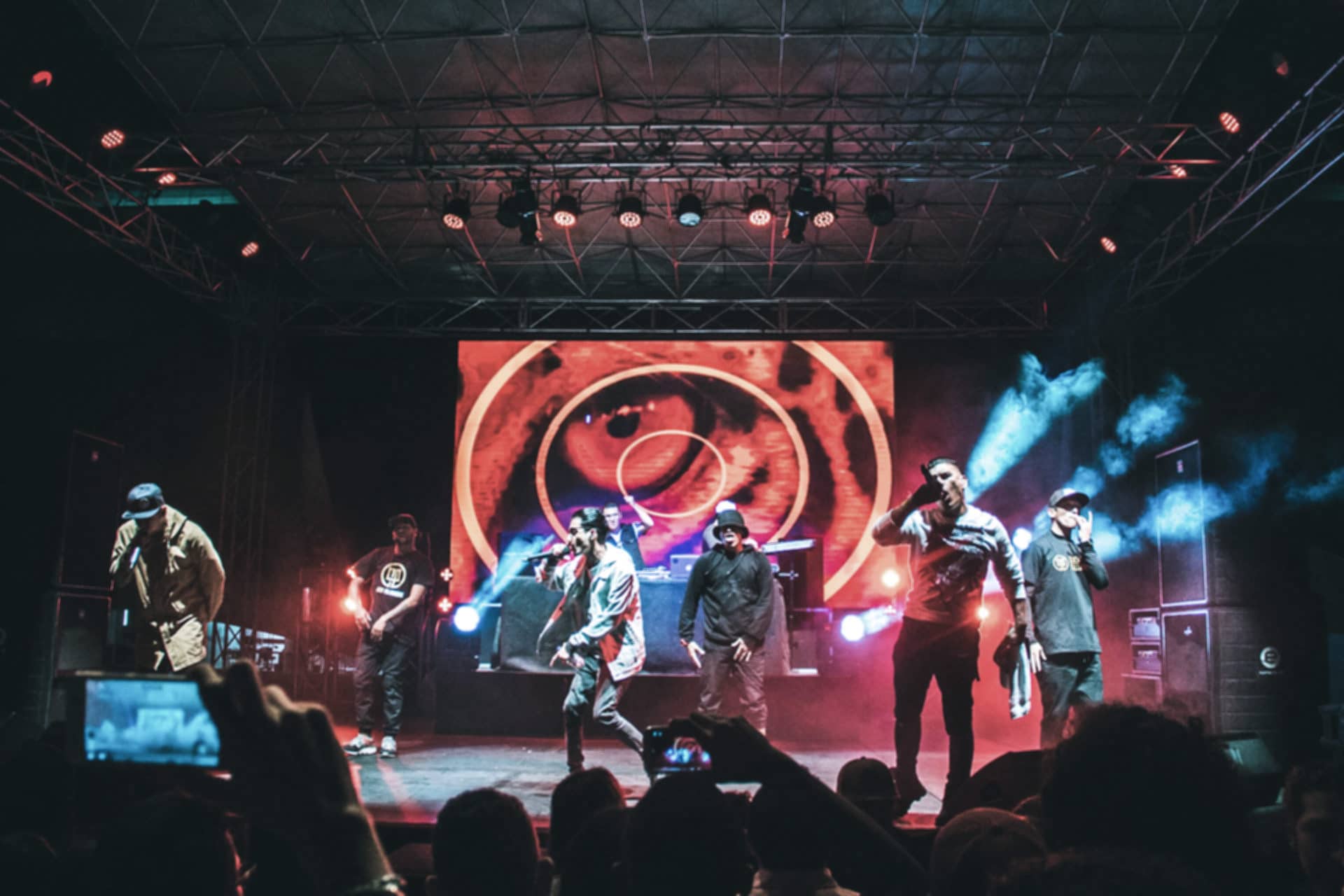 Transforming the lives of older people? We want you!