“The way you get a better world is, you don’t put up with substandard anything.” – Joe Strummer, The Clash

Transformative arts project WAYout is giving youth a way out of vulnerability and making a real, tangible difference. Standing for ‘Worldwide Arts Youth’, WAYout is Sierra Leone’s first and only free and all-inclusive media studio. Since being founded in 2008 in Freetown, the capital and largest city in the country on the southwest coast of West Africa, it has changed the lives of more than 3,000 vulnerable youth, child soldiers and homeless kids. 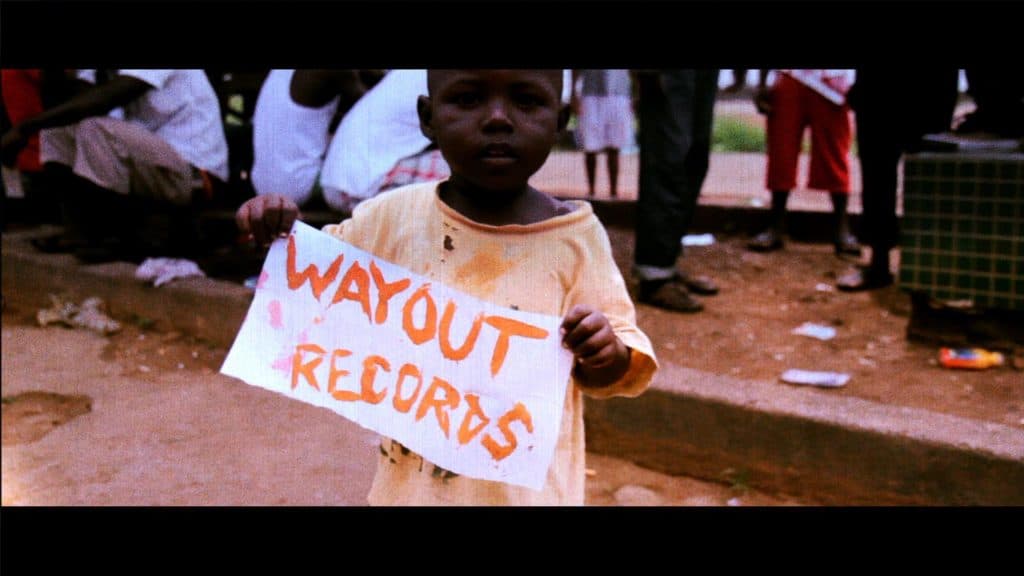 The innovative, youth-led charity is using digital media, music, design and arts to explore issues and tell stories by offering free training and facilities to street youth and disadvantaged young people in Sierra Leone, “reaching out to young people sidelined and disempowered, treating them as individuals, not statistics”.

Vulnerable and conflict-affected young people are practising music tracks, designing posters, planning performances or completing courses in Photoshop, camera, editing and documentary-making – in the hope of changing their lives. 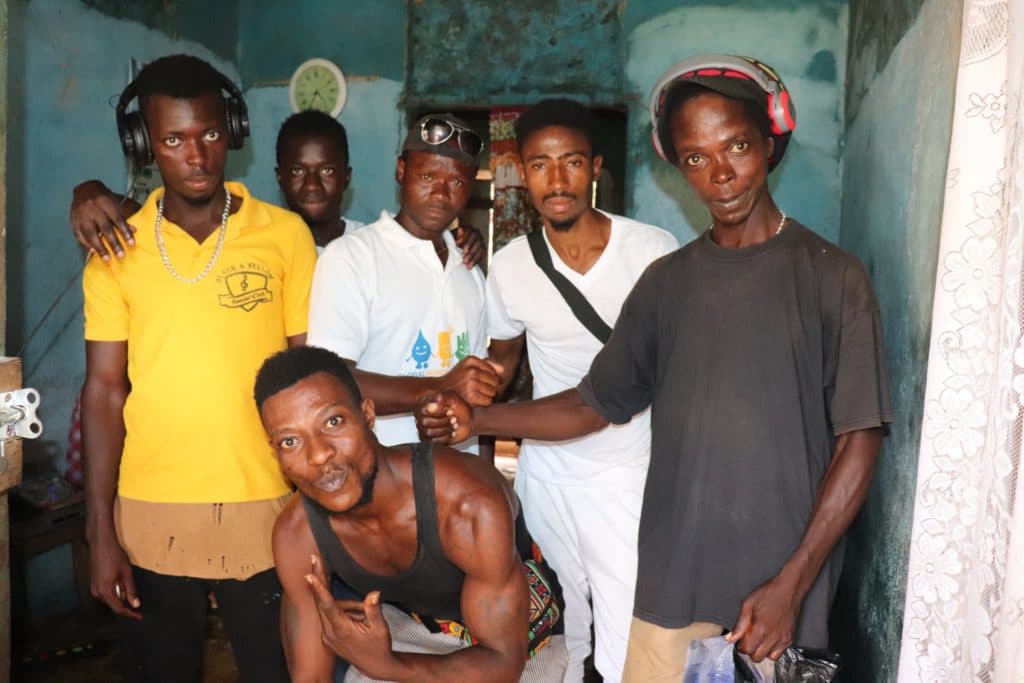 WAYout was founded in 2008 by British filmmaker Hazel Chandler, who is known to many of the youths as “Mum”. It was inspired by a film she had made a few years earlier about street youth in Kenema, on the Liberian border. Hazel gave gang leader, Yumyum, a small camera and asked him to record their lives, thinking he would sell it but if she was lucky he might record for a couple of days first:

“He never sold the camera and went on to shoot 100 hours of footage, raw, candid and sometimes brutal. That camera became his badge of honour and being asked to tell his story was the beginning of a change from which there would be no turning back. This was the inspiration to give other people cameras and tell them their stories are important and this is where the seed was planted to start WAYout.”

It is thanks to the Joe Strummer Foundation that WAYout has two sponsored studios and a mobile studio. The foundation was established in memory of punk rock singer and guitarist Joe Strummer shortly after The Clash legend’s death in December 2002. Its mission is to provide opportunities to musicians and support to projects around the world that create empowerment through music. Freedom is calling in Freetown, indeed!

“WAYout works in two basic ways: either by encouraging confidence and self worth and therefore reengagement with family and other forms of education or by training people to a professional standard so they can earn a living through their creativity,” Hazel tells us. “We know it can take two or more years for long term street youth to start engaging – up to five years to really get stuck in to learning – so we have no time limit and no age limit.”

In Studio One, new musicians and established WAYout musicians like Black Street Family and Nathaniel “Mash P” Sesayash learn to create new beats. Studio Two is a smaller mobile studio where young people who hope to be producers learn how to use Logic, the software that turns your laptop into a professional recording studio at home.

Mash P spent 12 years on the streets and has achieved a lot in the years since he joined WAYout. His track about homelessness features British folk singer Frank Turner and people from around the world:

Frank (pictured below) told Rolling Stone magazine that he was hyper-aware of a potential for embodying what he called the “white guy with a guitar who thinks he’s going to save Africa” stereotype. But his nervousness was short-lived.

“Before we started playing, I remember feeling pretty useless, pretty bourgeois,” Frank says. “If you have half a brain, you understand that if you come from America or the UK, you’ve grown up with a degree of privilege that is completely alien to most people here. But we then started playing, and all these kids, not knowing me or my songs or anything, came running up and soon everyone was clapping and dancing and singing. It truly felt like music transcending barriers.” 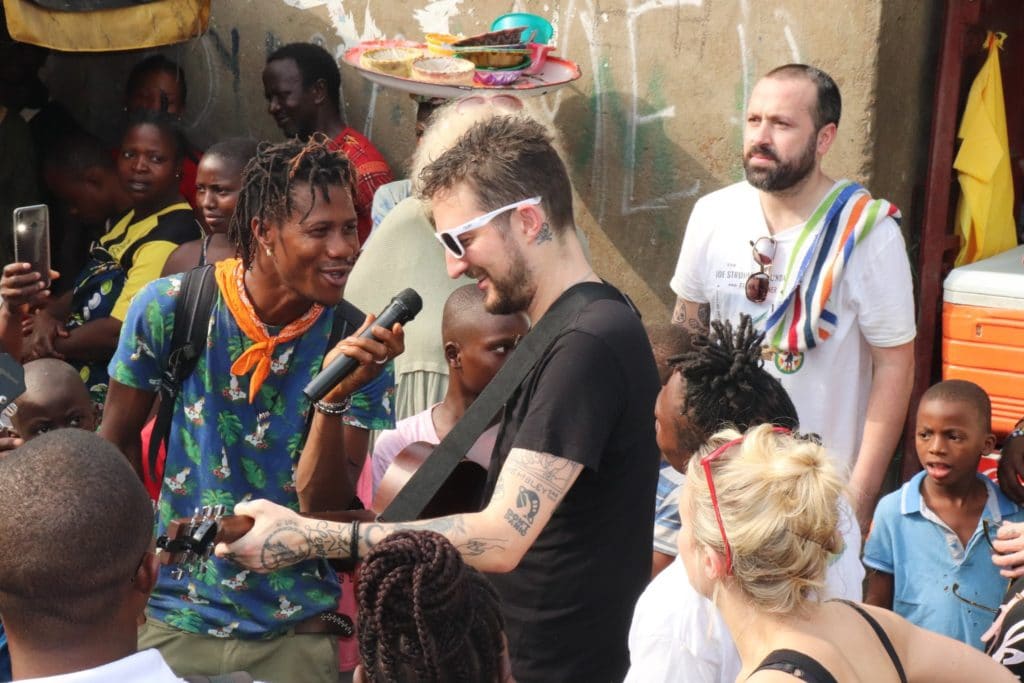 Meanwhile, the mobile studio goes out into the provinces where there is no access to studios, and apprentice producers and engineers come and learn the skills of the trade, which may help them find a more favourable place in society. It has also gone into the local men’s and women’s prison to work with inmates. Becoming a member of the choir directs energies away from troublesome behaviour towards creativity and achievement. 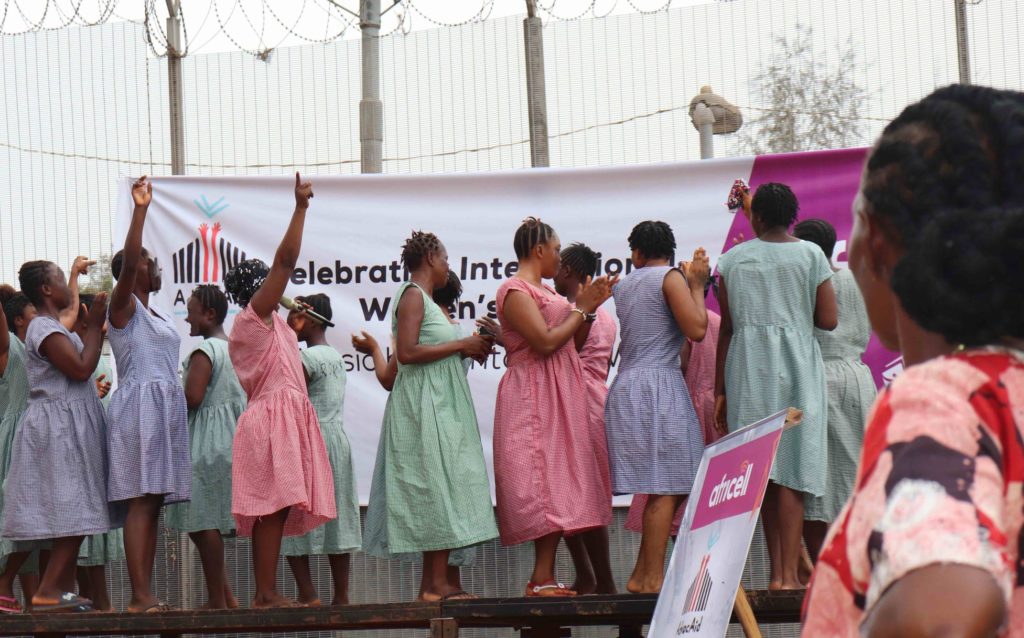 Those who have taken part have improved their English, learned IT skills and other technology-related skills. It has challenged the perception of what they can do in wider society, providing hope to these young people to be accepted back into their own communities. 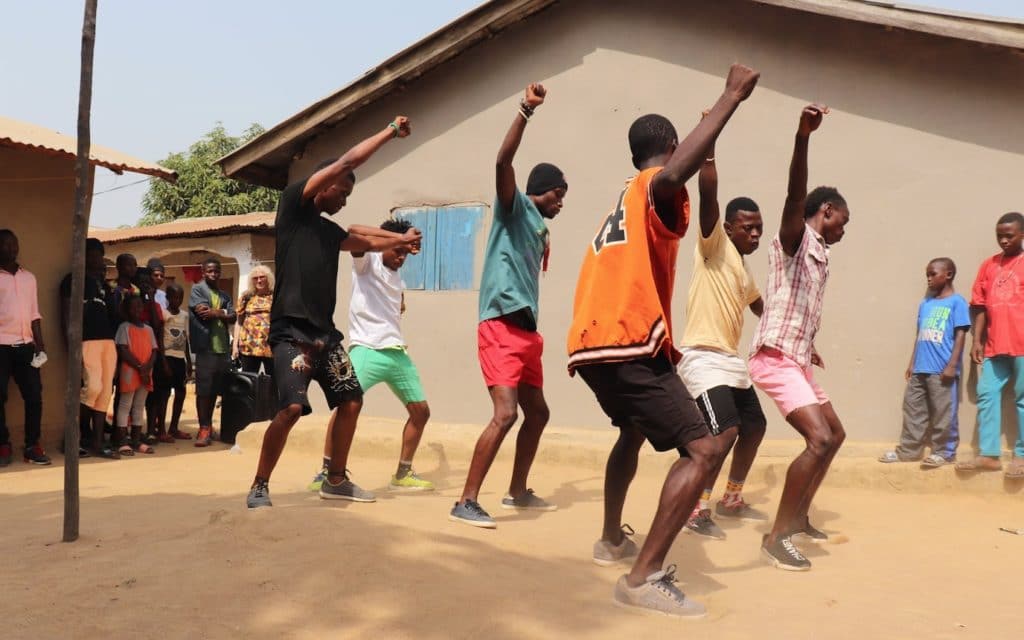 Approximately 20 per cent of the 18-35 year olds WAYout works with were child soldiers during the ten year conflict of Sierra Leone – an excluded minority who felt society had rejected them, who were unemployed and had nowhere to live.

WAYout has a smaller branch in Kissi Town, an old refugee camp were youth unemployment is 70 per cent because it’s been largely neglected by the country’s development efforts. They provide the youth with a goal for achieving something; new skills are learnt, confidence blossoms, literacy improves, a voice is found – and with it the ambition to change their lives. Kids who once only looked down, now look up.

“We have many members working in media, making money from their music or design work,” Hazel adds. “We have worked with over 3,000 young people and made films that have won awards in film festivals internationally or been broadcast on TV. Our long term plans are to reach out to more people, we have just opened a small branch in Kissi Town, the old refugee centre just outside Freetown and we want to see more people into employment or making a living.”

During Covid 19, WAYout is still open and taking all precautions to keep members safe, providing masks and washing facilities. Their members are some of the poorest people in Sierra Leone, so they are providing them daily meals and housing where they can. 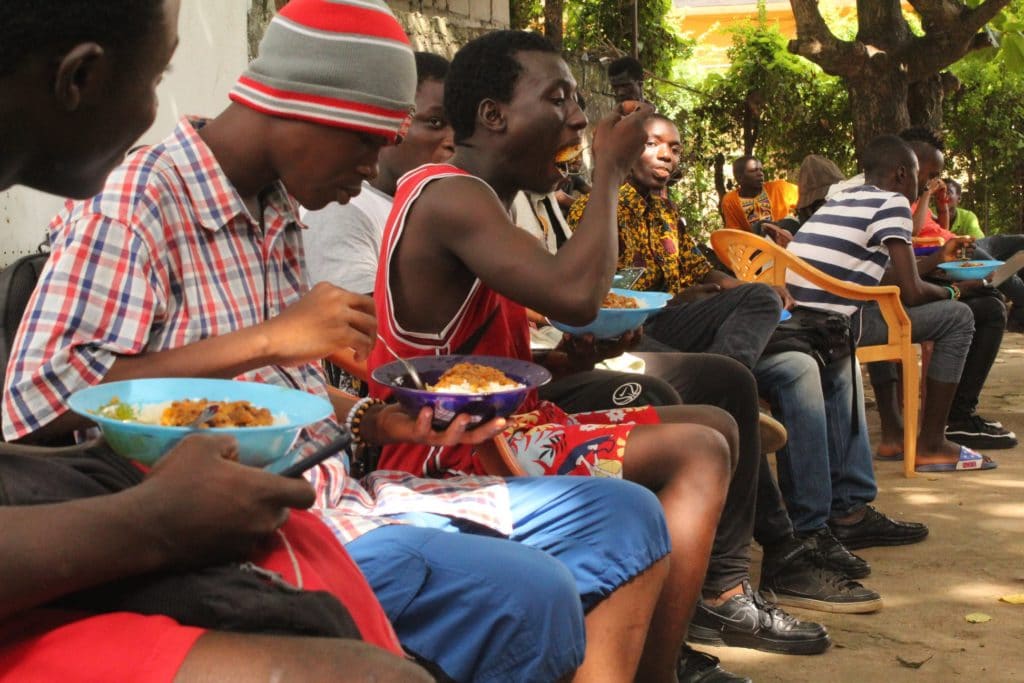 WAYout have had to change the way they work, but a lot has been going on with volunteers teaching online supporting writers, photographers and filmmakers. 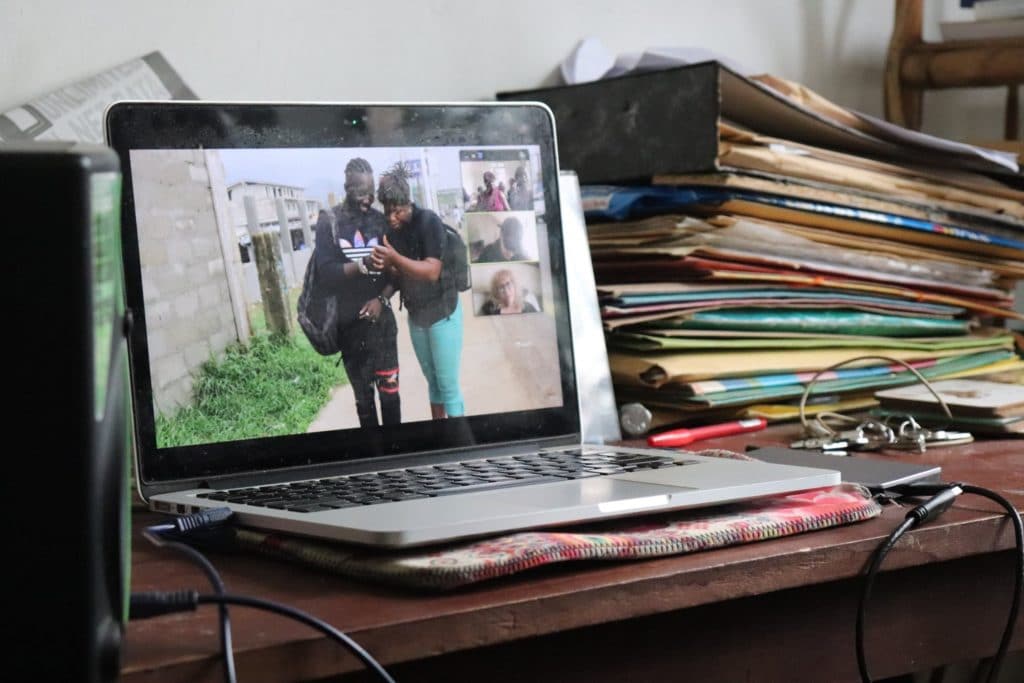 Following the success of the project in which women were trained to make films about the issues that affect them, WAYout is also making a drama with some members based on their own stories and the reasons why youth get into gang life and stuck in it. They will continue to do everything they can to promote artistic freedom, education and empowerment that enables the excluded to re-engage.

Watch this BBC World documentary about Mash P’s life to understand the “jungle”.

AtlasAction: Become a volunteer or donate by going to Virgin Money Giving.

Journalist and blogger, Oscar has worked as an editor for several travel, nature and science magazines for the last 20 years.

Meet the people bringing the magic of music to youth in Palestine. In Bethlehem’s refugee camps, it can be hard...
See more 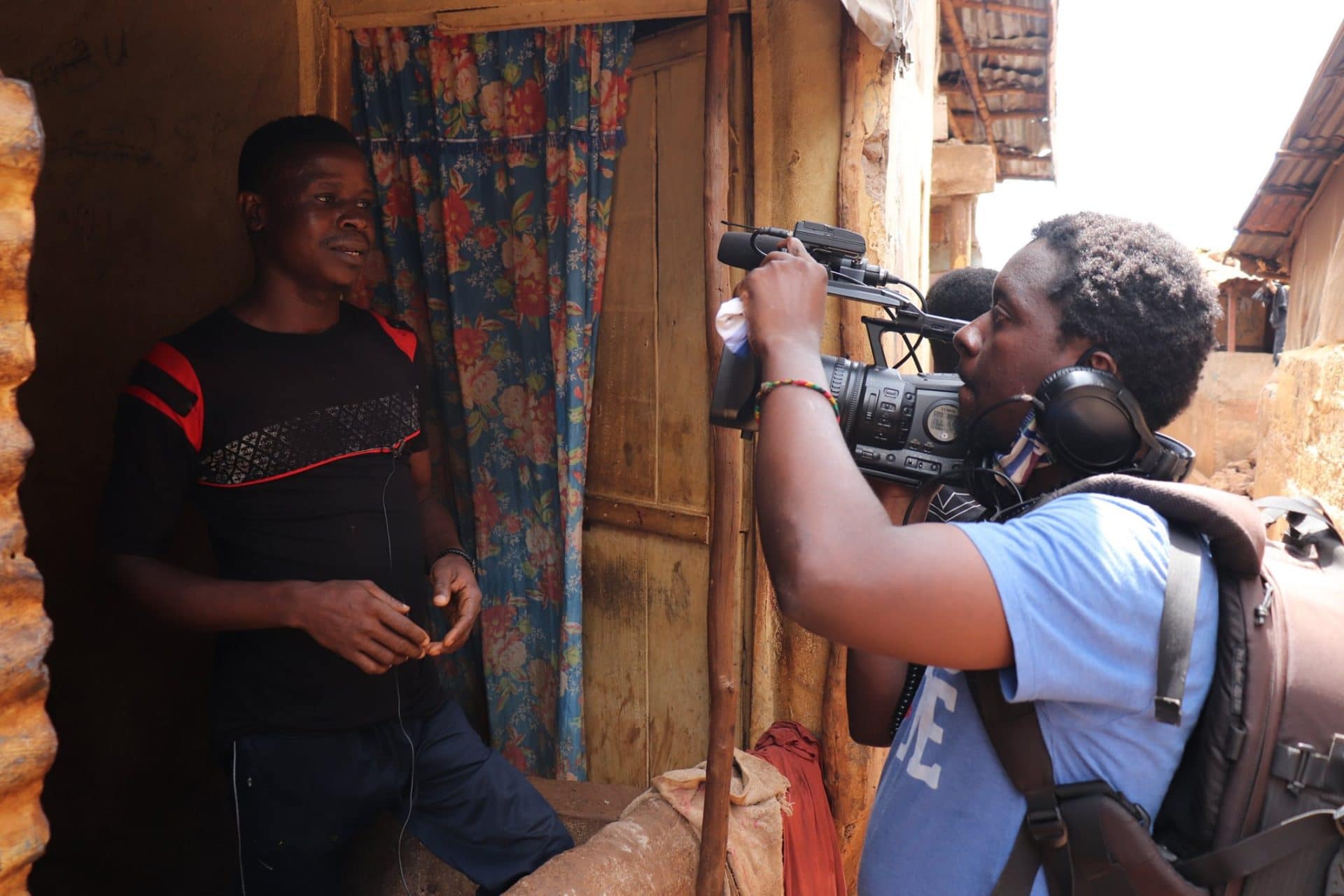 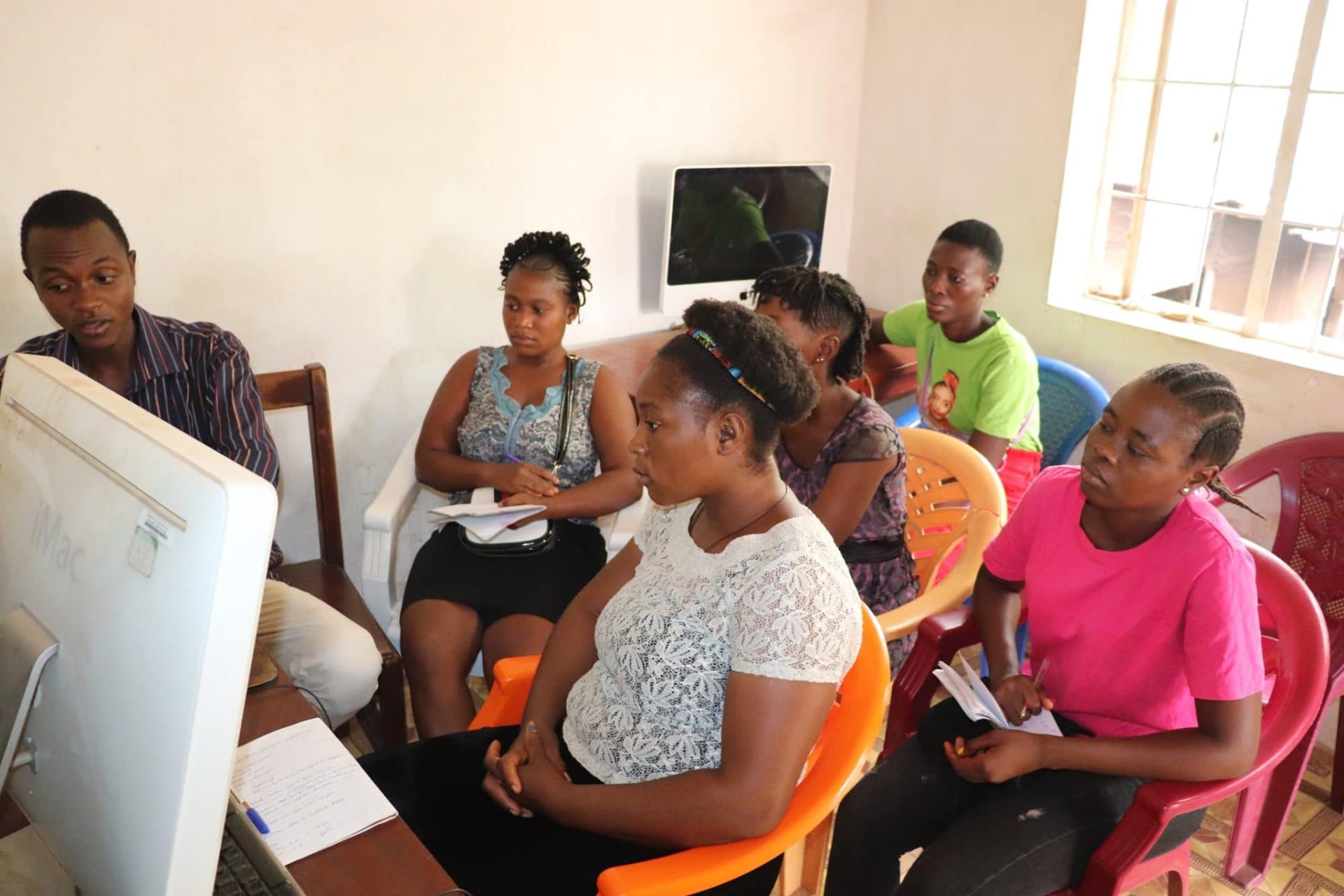 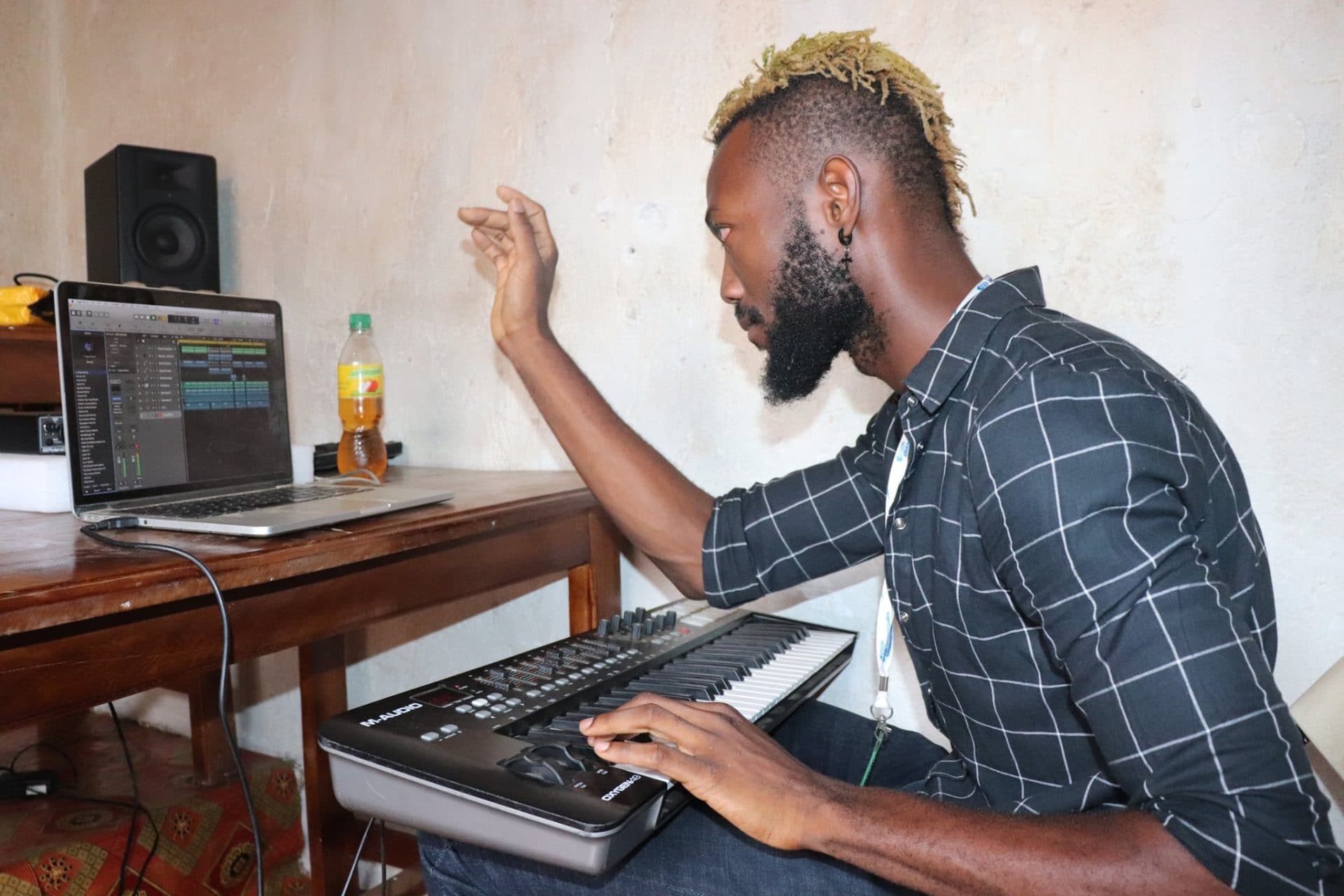 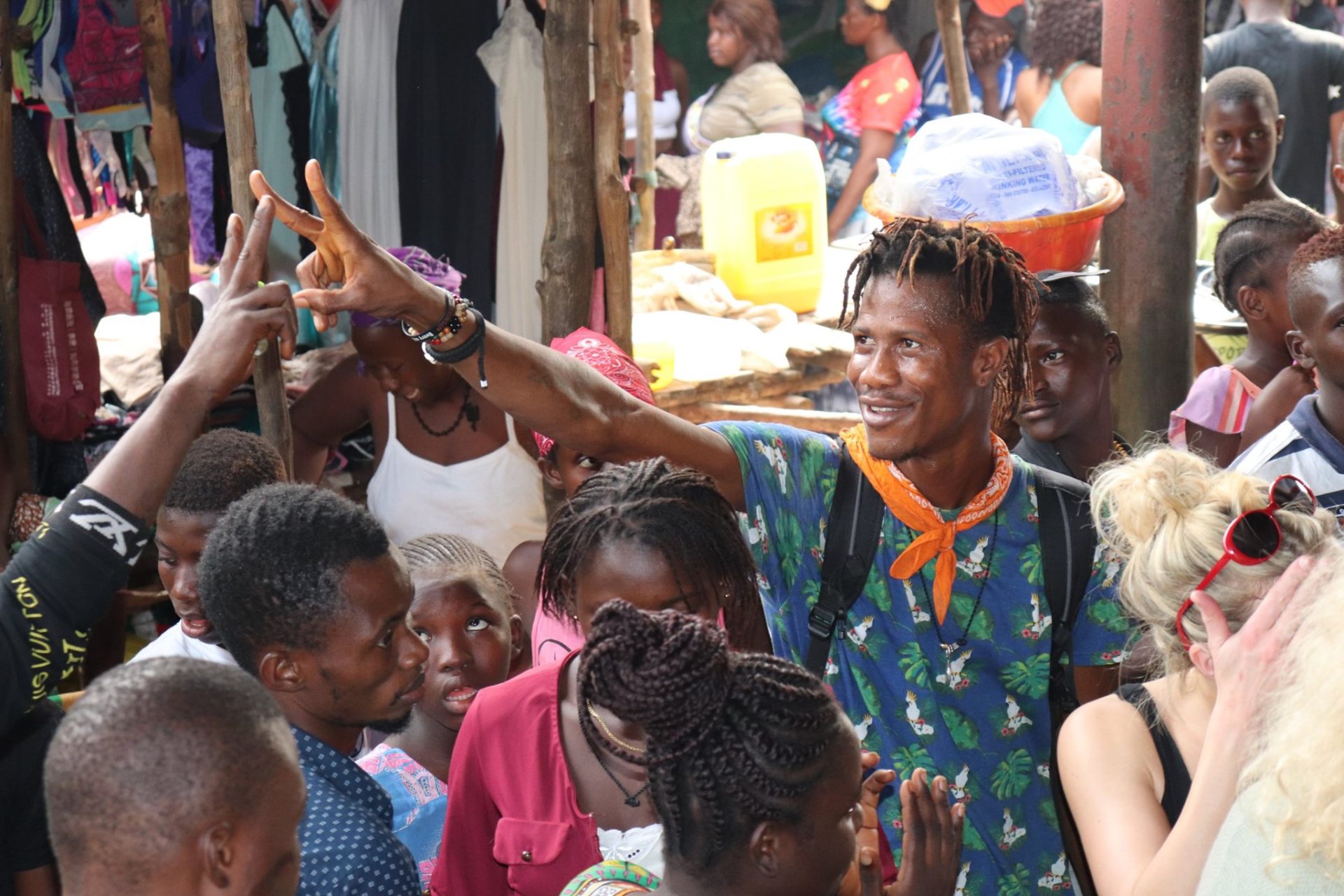 Meet the people bringing the magic of music to youth in Palestine. In Bethlehem’s refugee camps, it can be hard...
See more