Quite literally raising the bar on anti-knife crime campaigns, Steel Warriors are using surrendered blades in the best possible way.

Between 2018 and 2019, the UK saw a 22 percent spike in criminal offences involving knives; violence affecting not only immediate victims but scarring entire communities, too.

While there is no one quick fix, no single answer, there are non-profit groups out there working to tackle the crisis at its core – and you’ll find few as innovative as Steel Warriors, who are melting down confiscated knives and turning them into outdoor callisthenics parks in London.

“A lot of young people from less wealthy backgrounds don’t have access to gyms,” says Ben Wintour, who co-founded Steel Warriors in 2017, “and so by placing these parks in areas affected by high levels of knife crime, we can distract younger people and bring them together, building enough physical confidence that they can walk the streets unarmed.” 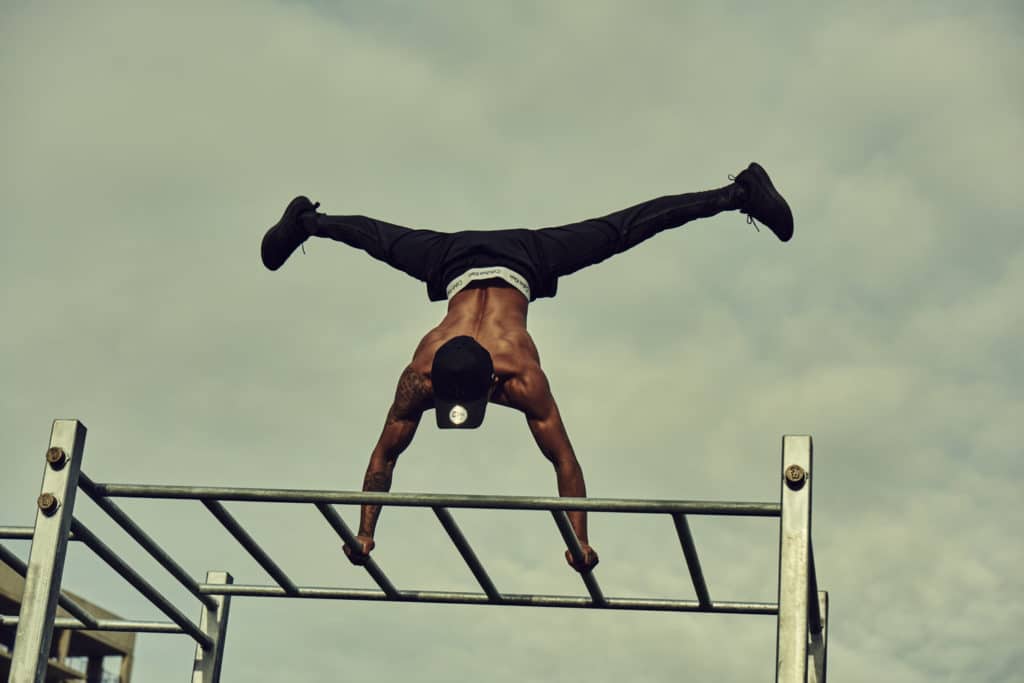 They carefully select each gym location, taking into account knife crime statistics and the availability of free facilities for young people in the area. So far, you can find them in Langdon Park (east London), Ruskin Park (Lambeth) and Finsbury Park (Haringey). Ben, a former PR manager, says the light bulb popped after hearing that police confiscate over a tonne of surrendered knives every month.

“I wondered if there was a way of taking all that steel, melting it down and turning it into something that directly counteracts the motives for carrying a knife,” he says. “The knife as an object has become socially accepted for groups, so we need to deglamourise a knife, to turn it into a pink Tamagotchi. It’s about symbolism as well as protection, to show how tough you are. If you get people thinking this way, then we may see more knives off the street. Knives are now carried for protection, muscle flexing and bravado.”

And where muscle flexing is concerned, callisthenics was a no-brainer. Part parkour, part gymnastics, it’s one of the world’s fastest-growing fitness disciplines, and a big reason why such a diverse audience showed up at Steel Warriors’ first fitness park in Poplar, east London. 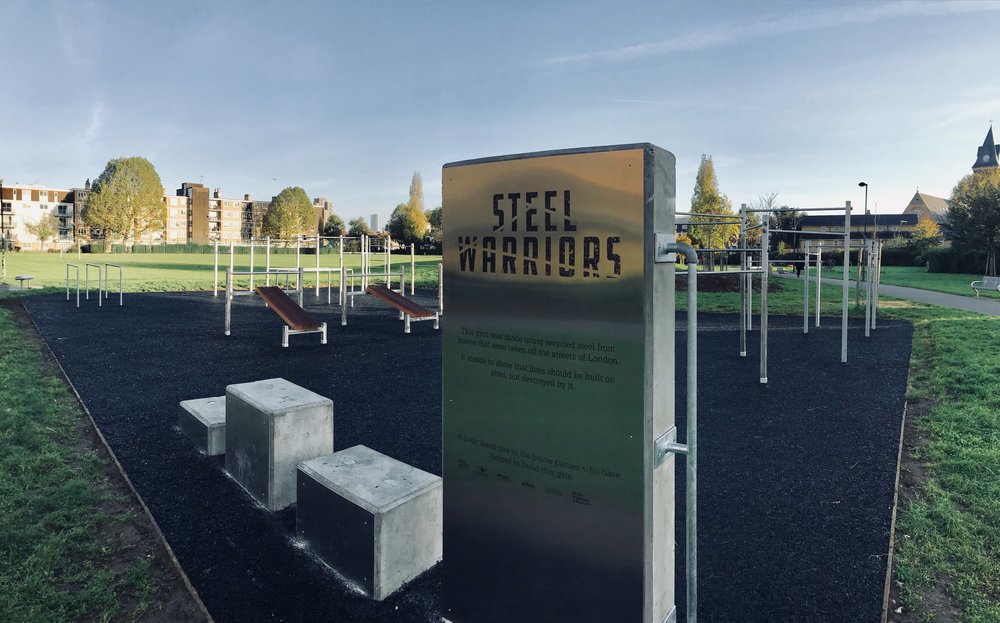 “Just before we got our first gym off the ground in Tower Hamlets, an area suffering from high levels of knife crime, some people found a callisthenics park hard to visualise, but, since it’s been built, we’ve had really good feedback from the community, and lots of people writing in. The director of the youth centre over the road from it tells us young people, old people and women with hijabs have been working out on it. It’s even drawn in callisthenics tourists, because it’s a new bar setup.”

The Steel Warriors gym raises awareness of knife crime whilst providing a safe, positive community space and an outlet for young people, helping to take knives off the streets and drive home the message that carrying one is more likely to ruin your life than save it.

Cutting edge in more ways than one, the park itself is widely considered one of the best of its kind in Europe, and was even given design approval from Barsparta, whose own founder, Jay Chris, is a callisthenics World Champion, reformed gang member and now an ambassador for Steel Warriors. Actor Idris Elba has also become a recent ambassador for the organisation.

Ben and fellow co-founder Pia Fontes enlisted a number of other reformed ex-gang members to provide lessons on the bars for youngsters and locals, and Ben claims to have seen first-hand how vital this approach can be in ensuring youngsters don’t go down a fatal path: “Jay Chris used to carry knives and be in a gang, and there were a few kids chatting at the gym. He spotted that they may have been exchanging drugs, so he went over to start mentoring and got them doing a bit of exercise on the bars, which was amazing to see. They got competitive. Gangs are territorial, yet we see kids from different postcodes mixing over fitness.”

So where next for Steel Warriors? They have launched a free winter training programme at Ruskin Park open to all ages and levels (no booking needed, just show up). The vision is to build a UK-wide network of gyms, a street workout movement.

Ben says he wants to get his message out to as many communities as possible, deglamourising knife crime, blade by blade. After all, if anything illustrates how precious and fragile a life can be, it’s one of those.

While surfers, fishermen and sea-lovers might be aware of the devastating impact of discarded plastic, not everyone knows that marine...
See more 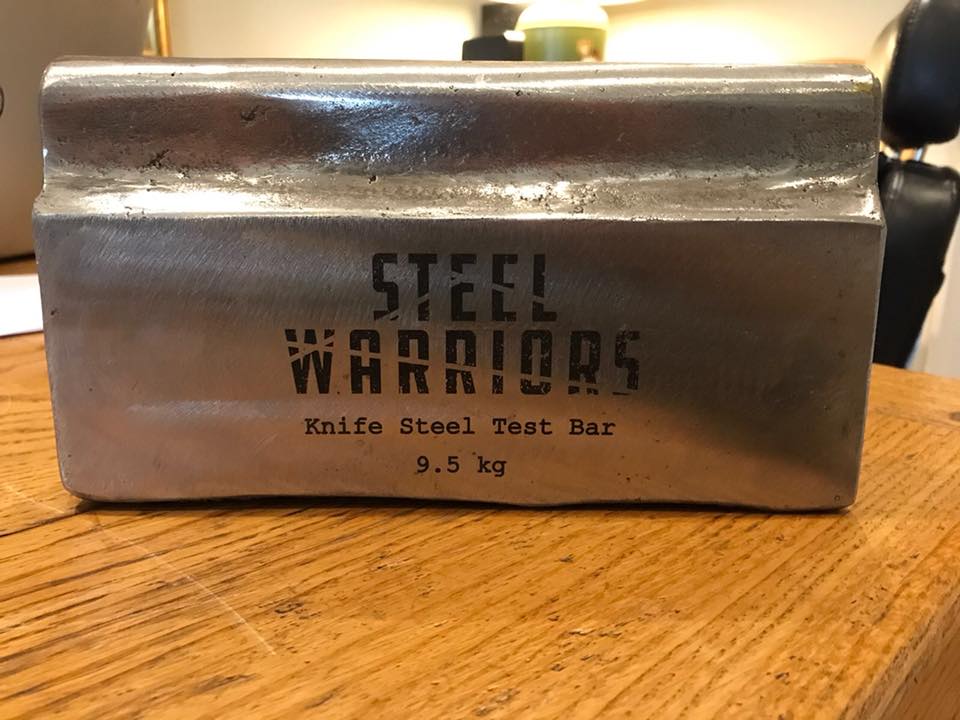 While surfers, fishermen and sea-lovers might be aware of the devastating impact of discarded plastic, not everyone knows that marine...
See more