One of the most exciting legacy project’s from the 2016 Rio Olympic Games is the Museu do Amanhã, or Museum of Tomorrow.

Conceived by educational think tank Roberto Marinho Foundation and brought to life in the Praça Maua port region of the city of Rio by a consortium of public and private organisations and US$100 million of investment, already over 4 million visitors have passed through the Museum of Tomorrow’s doors since its opening.

The Roberto Marinho Foundation focuses on preservation of both the cultural and environmental heritage of Brazil, and creates new museums as one of the vehicles for their work. One of the museum’s Curators , Alexandre Fernandes, recalls those early discussions: “The Foundation already had experience of creating museums from intangible things, such as the Museum of Portuguese Language and the Museum of Football.  The initial idea was to create a legacy for the city of Rio – and to reflect that Brazil has been leading conversations on climate and sustainability for many decades – through a museum for the planet.” And so the Museu do Amanha was born.

The building’s organic design is by Spanish architect Santiago Calatrava. Its exhibitions explore the opportunities and challenges of the climate emergency and its impact on human society and planetary boundaries over the coming years. The main exhibition space, curated by physicist and cosmologist Luiz Alberto Oliveira, is structured into five areas: Cosmos, Earth, Anthropocene, Tomorrow and Us.

From 2021, curatorial responsibilities are being led by a curatorial committee of three members, each one dedicated to a key area: environment, regeneration and sustainability; social justice and conviviality; and innovation. “The three of us will co-curate the narrative arc of the museum’s programme and what the big topics for each year will be,” explains Alexandre. “Each one of us will then help curate the smaller exhibitions as well – for example I’d be more involved in an exhibition on digital accessibility but my colleague would manage an exhibition on indigenous knowledge and rights”.

Working with schools and students is a major part of the museum’s mission. As one of the most visited museums in South America, the school programme is very strong. “We are launching an online virtual programme for schools that will reach about 300,000 students online – it’s like a whole sustainability curriculum for schools through the museum,” he adds.

The museum is also active internationally and the centre of a globally connected network of museums of the future, through the Amsterdam-based MOTI – Museum of Tomorrow International – which works to develop international cultural projects aligned with the museum’s values. One of its projects has been to develop FORMS –  Futures-Oriend Museum Synergies – born out of a Master’s thesis in 2019 to map the emerging category of museums focused on climate and futures. “Importantly, they are not about heritage or the past, they are about the future,” says Alexandre. “Considering what is important to preserve for such museums is a whole new topic.”

The museum, and MOTI, are committed to the area of Futures Literacy: “It’s really close to our hearts. Futures Literacy has been declared by UNESCO one of the core competencies of the 21st century, and we are promoting this within that community. It’s about being aware of our assumptions, especially when we are projecting images of the future. I really want to work on creating wonderment, curiosity, and excitement about the future.”

In terms of what next, the museum is enhancing its digital presence and bringing its exhibitions online – taking the museum outside of its physical space. Alexandre notes that, “in the context of Brazil, we still have a lot of work to do on digital agency and providing more digital access to people.” And in common with museums connecting audiences to the climate crisis around the world, the hope is not only to educate, but to inspire action: “Bridging awareness with action,” he concludes, “that’s the big challenge – always.” 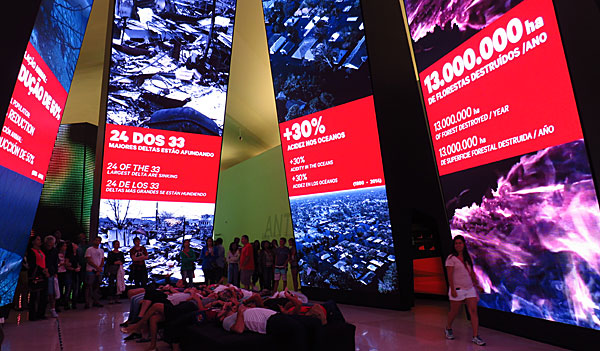 Occupy space, occupy history: can you hear the land you’re walking on? In Fitzroy, a historical inner suburb of Melbourne,...
See more

Occupy space, occupy history: can you hear the land you’re walking on? In Fitzroy, a historical inner suburb of Melbourne,...
See more