How do you inspire action on the climate emergency? Through spectacle, satire and humour, according to ClimActs.

ClimActs co-founder and committee member Deborah Hart has known since the age of eight that there was something not right about the excessive exploitation of the world’s resources. When she was a girl her family drove into their new town of Port Arthur, Texas, one of the largest refinery towns in the world, and Deborah was overwhelmed and horrified by the stench in the air. She was told that after a few days she wouldn’t even notice the smell. “I felt a kind of guilt, that I knew what butterflies looked like…I knew what a really beautiful environment looked like,” Deborah explains of her time in the town. It was the beginning of her journey as an environment and social justice activist. 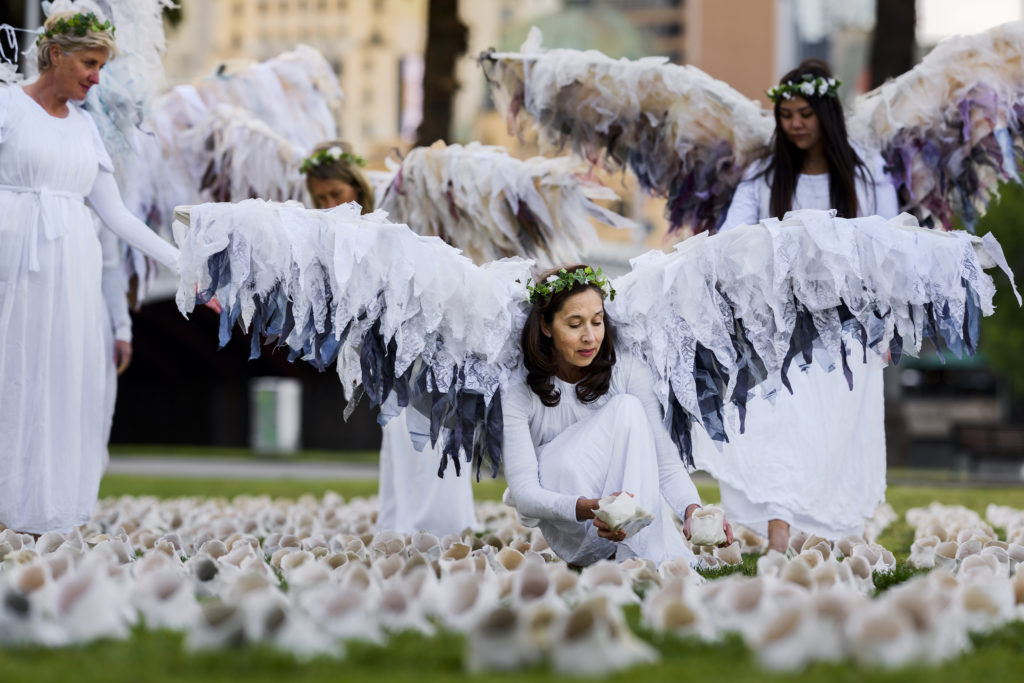 As United Nations delegates were arriving for Day 1 of COP25 climate negotiations in Madrid, 624 pairs of hand cast clay skins from Bridget Nicholson’s Touch This Earth Lightly project lay in tight neat rows on the banks of the Yarra River opposite Federation Square in Melbourne, Australia. Why 624? To raise awareness and honour environment defenders who have lost their lives, estimated to be three people every week since The Paris Agreement, December 2019. Photo courtesy of Julian Meehan.

Fast forward, through various jobs in the cultural sector, to 2013, when ClimActs was born. A performance collective that uses spectacle, humour and satire to inspire action on the climate and biodiversity crisis, ClimActs’ actions hold to account powerful polluters and their enablers.

Their first acts were inspired by Allana Beltran’s Weld Angel (2007), a sculptural site-specific performance art and activism piece that drew attention to the destruction of the old growth forests of Tasmania, Australia. Allana’s intervention was a last-resort, creative act that tried to halt the logging. Her actions became internationally known when she was sued for $10,000 by Forestry Tasmania and the Tasmanian Police, a case which Allana eventually won. 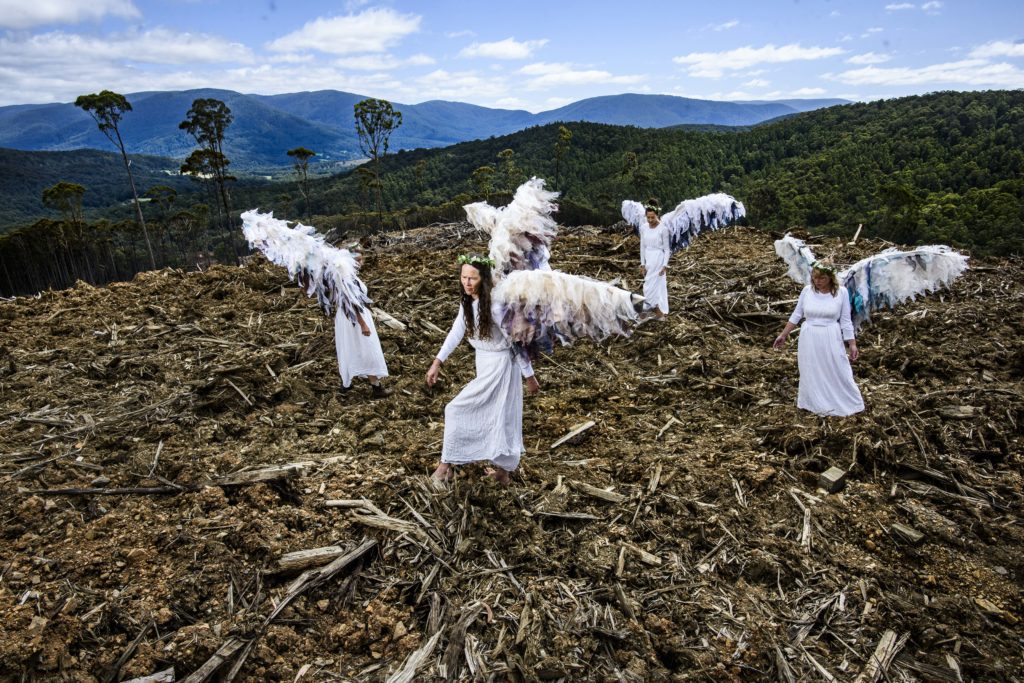 Inspired by this artistic approach to activism, ClimActs decided to use a similar angel iconography to highlight the vital role of guardianship for all life. And, as Deborah says, “Who wants to be seen manhandling angels?”

ClimActs’ Climate Guardians officially opened the Lorne Sculpture Biennale in 2014 with Coal Requiem, a specially commissioned performance art piece. Designed by Allana, the Angels’ magnificent giant wings were especially created for this performance. However, Deborah also points out their practical uses: the large wings make a very effective blockade, something that has often come in handy. 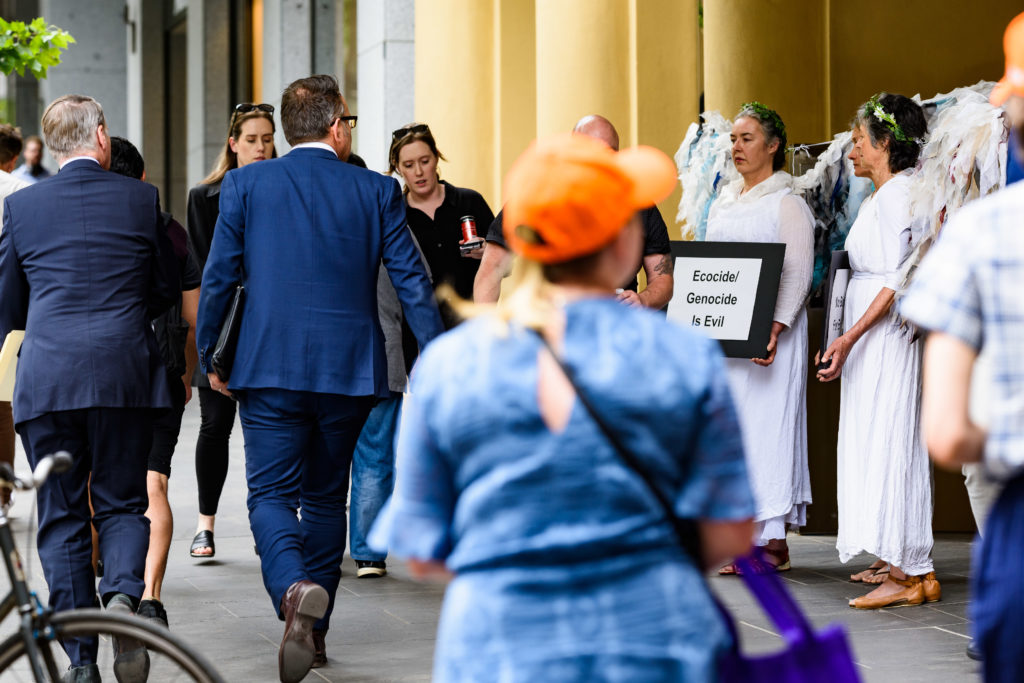 ClimActs’ Climate Guardians intervention, and subsequent press attention, at the Paris COP21 and at the G20 Summit in Brisbane, was an example of the impact of peaceful yet creative action. As Deborah explains, “the reason why we use spectacle is because it can surprise and get under people’s ideological guards to potentially enable them to see environment and associated social justice issues in a new light.” 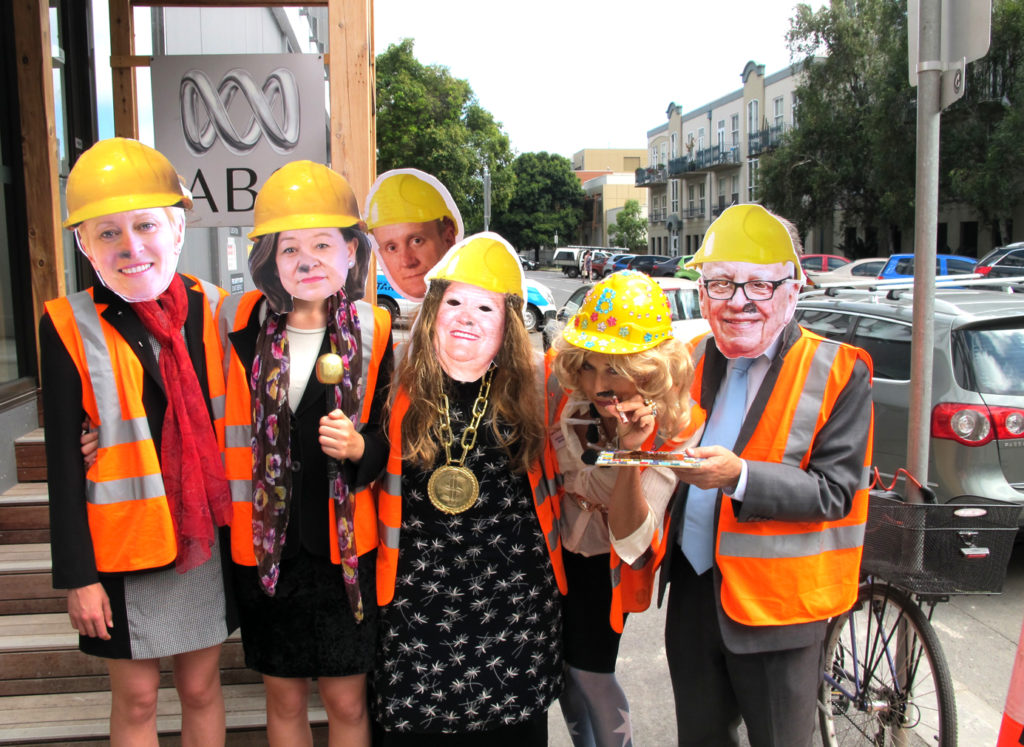 Rebranding the ABC: Australian Broadcasting COALition after Vanessa Guthrie (the then Chairwoman of the Minerals Council of Australia) was appointed to the ABC’s board, bypassing the independent selection panel and process, March 2017. Photo by Jo Lane.

Over time ClimActs has expanded their interventions to include the Coal Diggers (Carbon Barons who believe that the Magna Carta protects fossil billionaires’ entitlements to own energy sources) and the Flat Earthers (time travelling Medieval Astro-Geologists who serve the fossil Billionaires United Mining Services). In each act, their approach is creative and humorous, with characters like Coral Bleach, who approach politicians, financiers and media companies to challenge the reliance on fossil fuels. As Deborah explains, the three approaches are narratives that work well, as they are very playful and whimsical, never rude or aggressive: “People can’t help laughing, even if they don’t like you.” 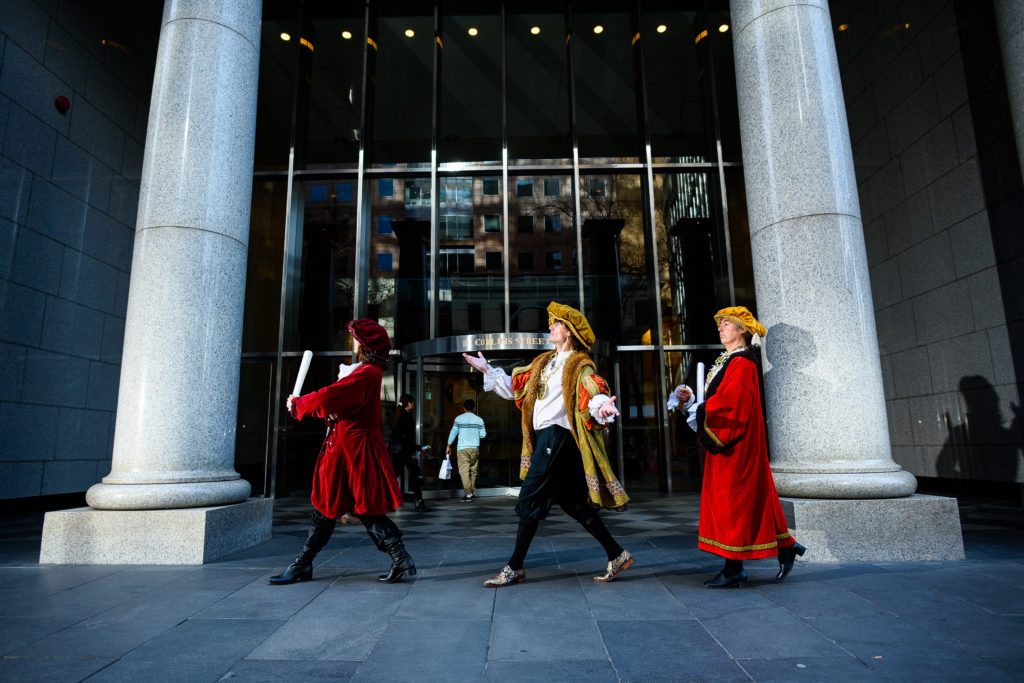 In addition to their public performances, where they have offered to help a soon-to-be Prime Minister with his coal addiction, ClimActs also advocates for change through their fact-based submissions to government Inquiries.

But it can be a challenge to keep the light-hearted approach, especially after COVID-19 lockdowns and in the face of legal challenges to their right to protest. “We’ve always had great reactions from people,” Deborah says, yet “people are certainly more aware and more tired, more depressed and more cynical. I think a lot of us thought that all the facts and the data and the evidence and being clever and shining torches would be more effective than it’s been.” 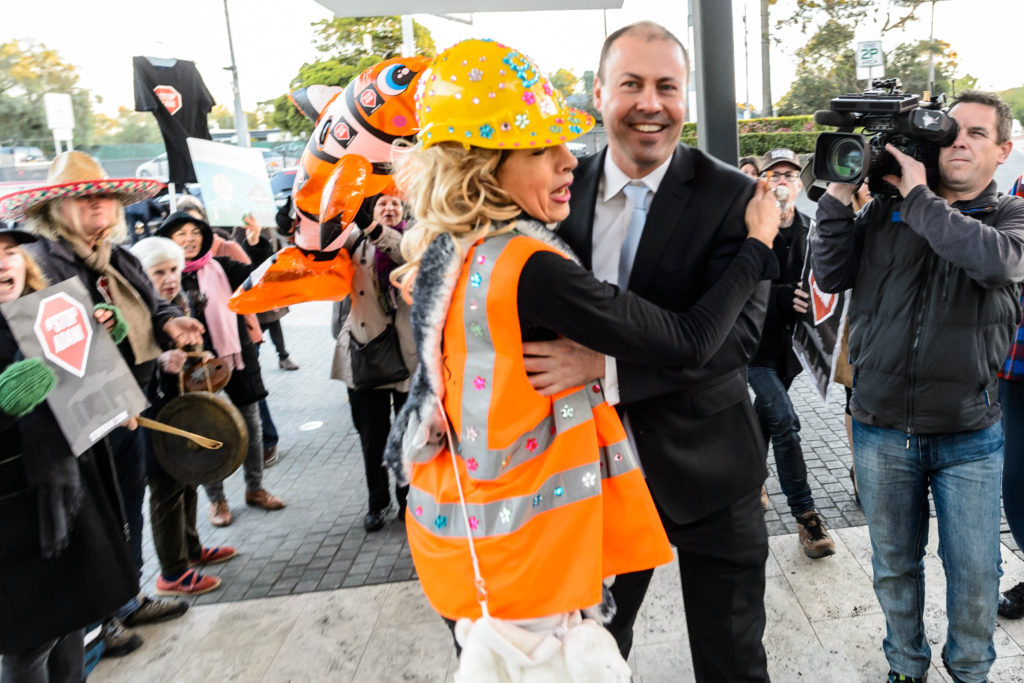 Although she is sometimes frustrated by the apathy, Deborah is more determined than ever. “We just have to get out and do this stuff because we have to! We have to do something!”

Eventually, they would like to become redundant—with leaders that listen to experts and make policies based on facts, data and evidence, their interventions would not be necessary. But in the meanwhile, they will persist, being a thorn under politician’s skins and advocating for an economy that is cleaner and fairer for all. As Deborah says, “we’re certainly in here for the long haul.”

AtlasAction: Help ClimActs by joining their work making government Inquiry submissions and calling on leaders to implement the rapid phase out of all fossil fuel extraction. You can also connect with them to help out with the many behind-the-scenes tasks, or follow them on Facebook, Twitter or Instagram.

Resolve Trash2Cash is a women-led micro enterprise that transforms attitudes to waste and recycling.   Waste has one of the...
See more
Share this project

Resolve Trash2Cash is a women-led micro enterprise that transforms attitudes to waste and recycling.   Waste has one of the...
See more