This living breathing playground harnesses the power of play to generate clean air in one of Europe’s most polluted cities.

Polish towns are among the most polluted in Europe. A dangerous record for Polish kids: polluted air is particularly harmful to children as it can affect lung development and increase asthma attacks. Fortunately, a London-based studio has developed a nature-inspired playground to help Warsaw’s children reclaim safe public play space by having fun while purifying the city’s air. 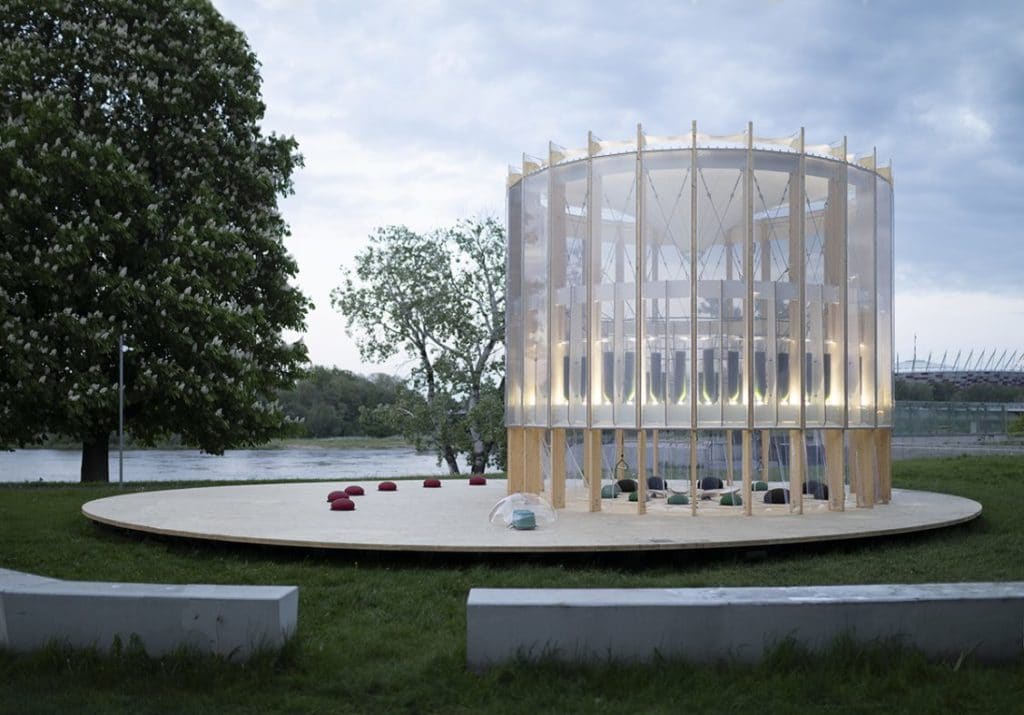 AirBubble is the world’s first biotechnological playground to use living microalgae to produce clean air. Children enter AirBubble and play with ropes, foot pumps and bouncy spheres. As they run, balance, and jump around, their kinetic energy and the bubble’s solar power keep the air purifying system working, effectively turning playfulness into renewable energy.

According to data collected by its creators and living architecture pioneers ecoLogicStudio, AirBubble can absorb up to 97 per cent of pollutant nitrogen in the air and 75 per cent of the particulate matter. 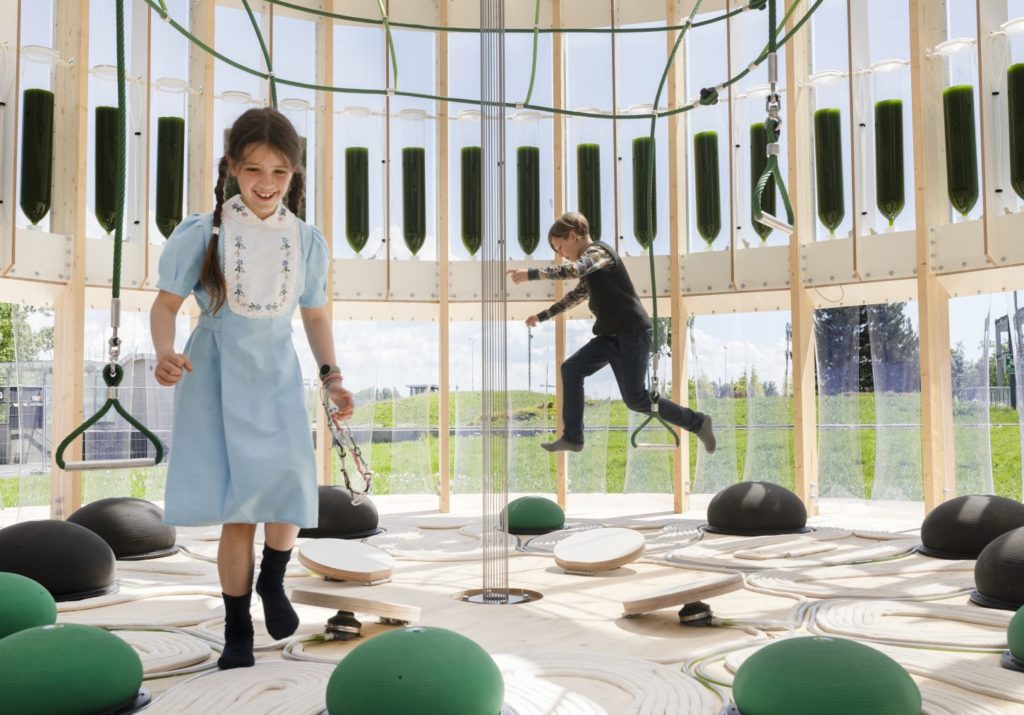 All fun and games. Image: ecoLogicStudio

Yet the safe microclimate inside AirBubble doesn’t stop at purified air. The white bubbling noise of the algae gardening system neutralises urban noise pollution coming from outside and provides a calming atmosphere to play.

“The main objective of AirBubble projects is to ensure that kids want to come back and play regularly in this bubble of fresh air, in order to be able to observe and experience the patterns of change and evolution in time, of both its microclimate and algae cultures.”

Although children aren’t technically outdoors, the cylindrical timber structure wrapped in an ETFE membrane makes the playground seethrough, and the deep natural green of the 52 living algae reactors blends seamlessly into the surrounding nature. Located in the public green space outside Warsaw’s Copernicus Science Centre (Centrum Nauki Kopernik), AirBubble makes for a safe play environment next to the capital’s Old Town. 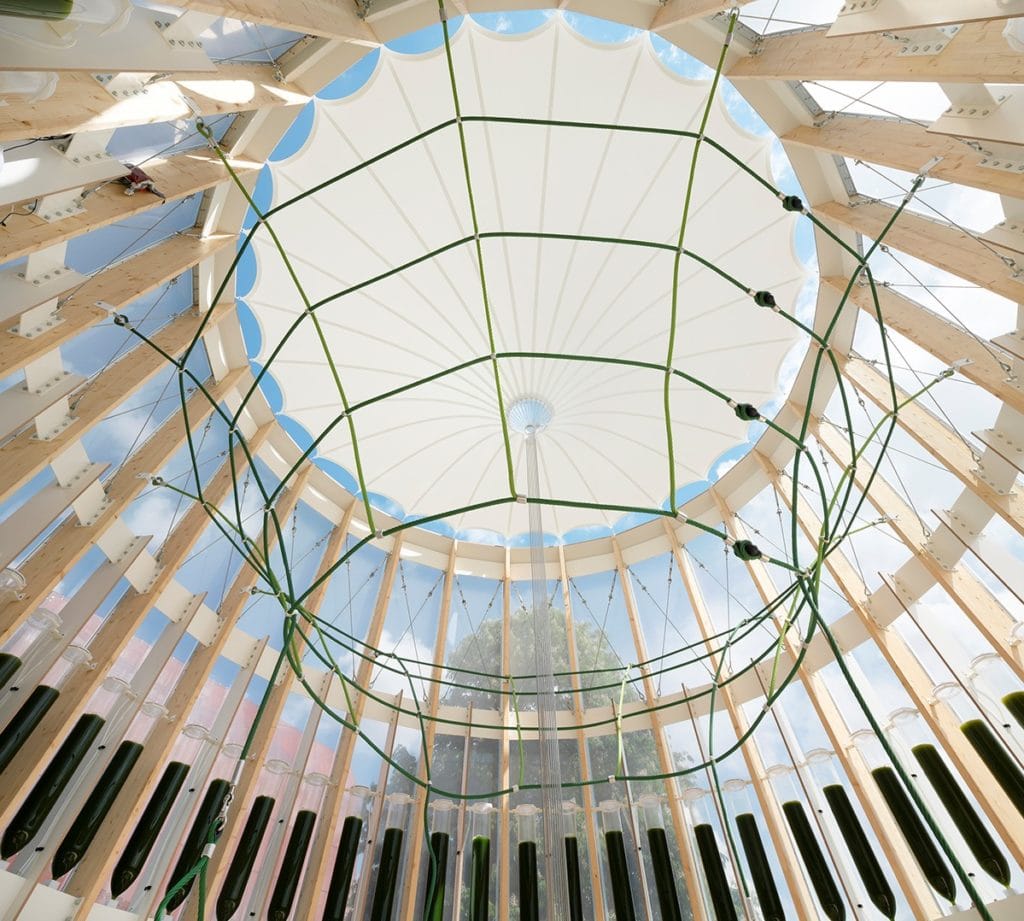 All hail the microalgae. Image: ecoLogicStudio

Plus, kids aren’t the only ones enjoying it. In November 2021, a portable version of AirBubble was installed within the COP26 Green Zone area. ecoLogicStudio presented it as:

“A tangible vision of how a net-zero civilisation can clean its pollution, produce its energy, grow its food and construct its buildings in the next 30 years, starting now.”

Yet, it ended up being one of the Green Zone’s most popular entertainments for conference-goers of all ages. People could be seen bouncing and Instagramming in the jellyfish-like bubble throughout the summit. Yours truly may or may not have spent quite some time inside (for the sake of reporting and for a pollution-free Glasgow, of course.)

ecoLogicStudio co-founders Claudia Pasquero and Marco Poletto met at the exams board at the university in Turin more than 20 years ago, when Claudia was “still a pink-haired punk and Marco a Lycra-clad mountain biking fanatic”, as she told Roscomar.

Although the scope of AirBubble in itself is limited, the purifying algae playground is part of their far-reaching vision:

“Scalable, nature-based designs solutions to the imminent impact of climate change and to our contemporary quest for carbon neutrality.”

By “recognising beauty as biological intelligence” the firm is quite literally building a future where natural systems are integrated into cities and buildings are “turned into living machines” that can help us “produce energy, store carbon dioxide and clean the air.” Marco explains:

“The future of green technologies emerging from the landscapes of the post-Anthropocene era is wet, soft and behavioural. Cities are evolving into intelligent super-organisms and shall become capable of searching for opportunities of co-evolution within the Urbansphere, both for their human and non-human citizens.”

The visionaries are working on building bio-factories in the near future, where microalgae are grown efficiently on the factory walls — the first pilot scheme has already been installed in Portugal. These days, you can play in the AirBubble in Riyadh at the Saudi Design Festival, and catch Claudia and Marco at Centre Pompidou in Paris later in the year at the Réseaux-mondes exhibition. 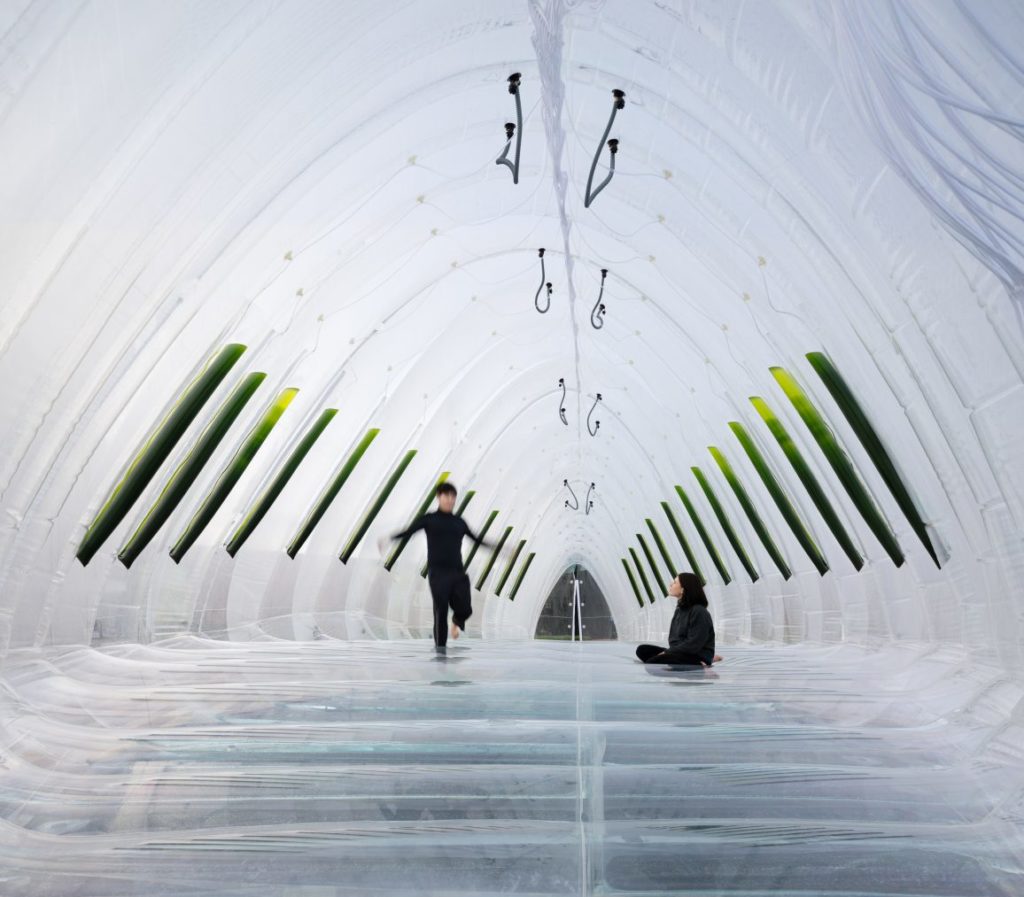 AtlasAction: Check out all ecoLogicStudio living buildings and projects. Will you move to a Wet City or grow your own domestic algae garden?

“Do you remember a time when the sky was filled with birds and bees, and colourful fruit grew from the...
See more
France (Paris)
France (Paris)

The 2021 IPCC report is 3,949 pages. Too busy to read it? This card game makes climate education fun.  ...
See more
Share this project

“Do you remember a time when the sky was filled with birds and bees, and colourful fruit grew from the...
See more
France (Paris)
France (Paris)