In the words of the people behind it, this might just be “the coolest thing you will see all year”. And they’re not wrong. It’s a rat that has been turned into a stingray…

Part-animal, part-machine, the robotic ray definitely looks cool, but what’s the point? Well, it turns out this bio-inspired hybrid is powered by genetically-engineered rat cells and may lead to a better understanding of the artificial heart.

Unlike other robot designs, which are often drawn from geckos or octopuses, this one is designed to swim just like real stingrays and skates: “Roughly speaking, we made this thing with a pinch of rat cardiac cells, a pinch of breast implant, and a pinch of gold,” says Kit Parker, the bio-engineer at Harvard University who led the team behind it. “That pretty much sums it up, except for the genetic engineering.”

Composed of a 3D body of silicone material and a gold skeleton for stiffness as well as flexibility, the miniature robot is one tenth the scale of the actual fish and moves using living rat cells that have been genetically engineered from heart muscles. The silicone has small ‘scales’ so that the cells grow with a specific muscular architecture. When stimulated with lights, the layer of rat muscle cell on its fins contract downwards and stored energy moves them back up again. Pulses of light direct the stingray to turn left or right.

The light idea was all down to Parker’s young daughter. When she was small, he guided her down the pavement with a laser pointer, so she would stomp on the light it emitted. As you do.

As live muscle robots work only in nutrient-filled solutions warmed to a rat’s body temperature, the challenge ahead is keeping them going in a natural environment. However, roboticists and engineers are excited because the stingray bot shows how biological cells can be used and how heart muscle can flush and flow liquid around it. Marine biologists are more excited by the fact it can help them understand the muscles in rays.

Parker questions if his stingray-bot is alive: “I think we’ve got a biological life form here. A machine, but a biological life form.” he says. “I wouldn’t call it an organism, because it can’t reproduce, but it certainly is alive.” But more importantly, he is happy that his piece of art and technology has one very important fan: “I’m looking at it and I’m trying to understand the heart – and impress my 7-year-old daughter.”

GPS for navigating colds and flu

A preview of the beta
Submitted by you: When someone you love is sick, you want them to have the best possible caregiver... You. Healthcast empowers...
See more 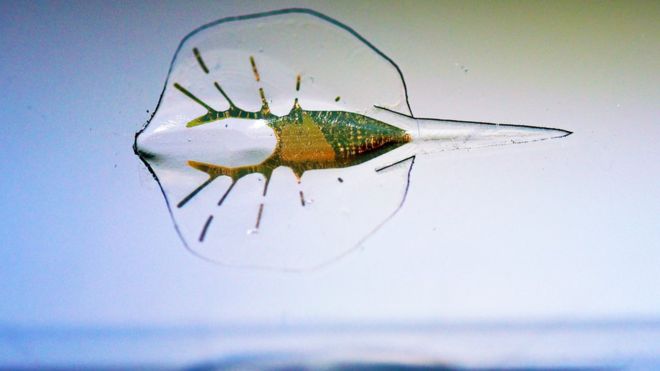 GPS for navigating colds and flu

A preview of the beta
Submitted by you: When someone you love is sick, you want them to have the best possible caregiver... You. Healthcast empowers...
See more