Out of the mouths of babes… come wondrous ideas and fantastical plans. Ever seen a rucksack with wings? How about a fork that cools your food? Welcome to Little Inventors, where crayon drawings become real life gadgets – inspiring a generation to keep believing that the only real limit is their imagination.

Kids have the enviable ability to look at the world like anything’s possible, and Little Inventors make sure that it is. They combine live invention workshops with an online idea gallery and a network of hands-on makers – to give children space to have ideas, show them to the world, and see them made real. It’s the brainchild of Dominic Wilcox, the inventor behind the world’s first GPS shoes, a tummy-rumble amplifier and a shelf made out ivy – amongst many, many other wacky and wonderful things.

Keen to see what would happen when young minds were given free rein to create, he launched a series of workshops in his home town of Sunderland in 2015. “The world has many problems and challenges”, he says, “and we need to encourage more inventive thinkers to solve them.”

Dominic found an empty shop, and turned it into a gallery of inventive ideas. Over 450 children took part, and their designs were shown to a group of local artists. Five of them – a family scooter, a Liftolator (War Avoider), a shady lamp, a super fast tennis ball and a high-five machine – were made into prototypes that have since found a home in London’s Victoria and Albert Museum. 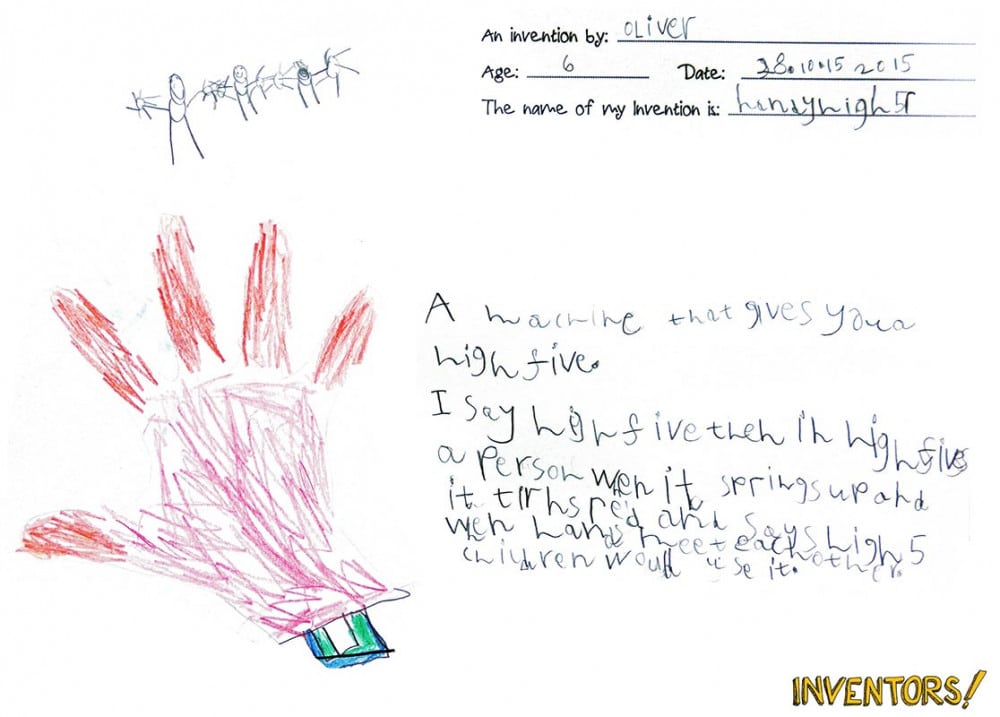 “I remember seeing the children’s eyes light up when they saw their idea made real, it really makes them believe that their ideas are important and can lead to great things. We started to receive requests to do the same thing in other countries so we decided to start Little Inventors as a permanent project.”

Now kids can submit their ideas to the Little Inventors website, where a growing network of inventive grown-ups choose ideas they want to make real. These woodworkers, electrical engineers, costume makers, artists and roboticists – otherwise known as Magnificent Makers – document their making process and upload it via the Little Inventors’ blog, so young creators can see their idea come to life.

Over 5,300 inventions have been submitted to the website, and the ideas made real include underwater aqua blades, a handy pencil-extender, and a pollution-busting jacket.

While a free-flow of wild ideas are always welcomed, Little Inventors also sets challenges to prompt inventions that tackle specific issues. They teamed up with Ocado to launch the food waste challenge, asked children across the North of England to come up with future-facing ideas for the year 2030, and joined forces with Aquafresh to gather ideas to make tooth-brushing more fun.

In 2017, Little Inventors made their way over to Canada, to bring STEAM (science, technology, engineering, art and math) learning to life in partnership with The Natural Sciences and Engineering Research Council of Canada (NSERC).

They have since partnered with the V&A Museum in London to connect kids to the Victorian spirit of invention. Exhibits made by little inventors can be found alongside the likes of Christopher Wren’s drawings and Leonardo da Vinci’s notebooks, and a free Little Inventors resource pack is available for teachers who want to inspire their pupils with the inventions of the past.

The team are now on the hunt for some next-level inventive energy in the form of Little Inventors Super Schools, which would get first access to the latest challenges and ideas and be linked to schools in other countries to work on invention ideas together.

For their Pioneers Challenge, Little Inventors asked thousands of children in the North East of the UK to draw invention ideas on the theme of ‘Energy’, making, saving and using better. They even teamed them up with makers and animators to bring the ideas to life.  This became an online exhibition with lots of videos. Check out Honey’s idea to make trees with solar panel leaves and little inventor Ethan’s The Power of Poo.

“Children are very environmentally conscious and so the challenge of thinking up inventions to save energy or create green energy was a natural subject to create a project around,” Dominic updates us. “Also the North East, where the challenge was set, has many industrial and engineering companies as well as research centres in Wind and ocean energy generators. We received support from the Arts Council England and Tees Valley Combined Authority to help fund the project.”

Little Inventors is as much about bringing out imaginations as it is about reinforcing kids’ belief that they can make solutions out of nothing. “I’ve been amazed at the amount of enthusiasm people have for the project and the amount of children who have said ‘I want to be an inventor when I grow up!’ after taking part.”

Most importantly, it’s a platform for creating a culture of collaboration and practical possibilities. “We believe that creativity is a great way to cross boundaries and create connections. We believe that anyone has the ability to be creative if they’re given the chance, and that this open-minded thinking is important for creating a better future through all of us – through ingenious inventions, but also through helping people to work together.”

Due to Covid-19, obviously Little Inventors is working more online than previously. “One success was our Mini Challenges project, where we set a daily invention challenge on twitter such as ‘Invent something to keep 2 metres apart’. These short challenges were very popular and so we have created a growing online resource of all of them on our website,” Dominic adds.

Little Inventors have also commissioned professional creators to make free online maker workshops for children and have two new books out, Little Inventors Go Green, about taking inspiration from nature, and Little Inventors in Space, all about inventing amongst the stars. 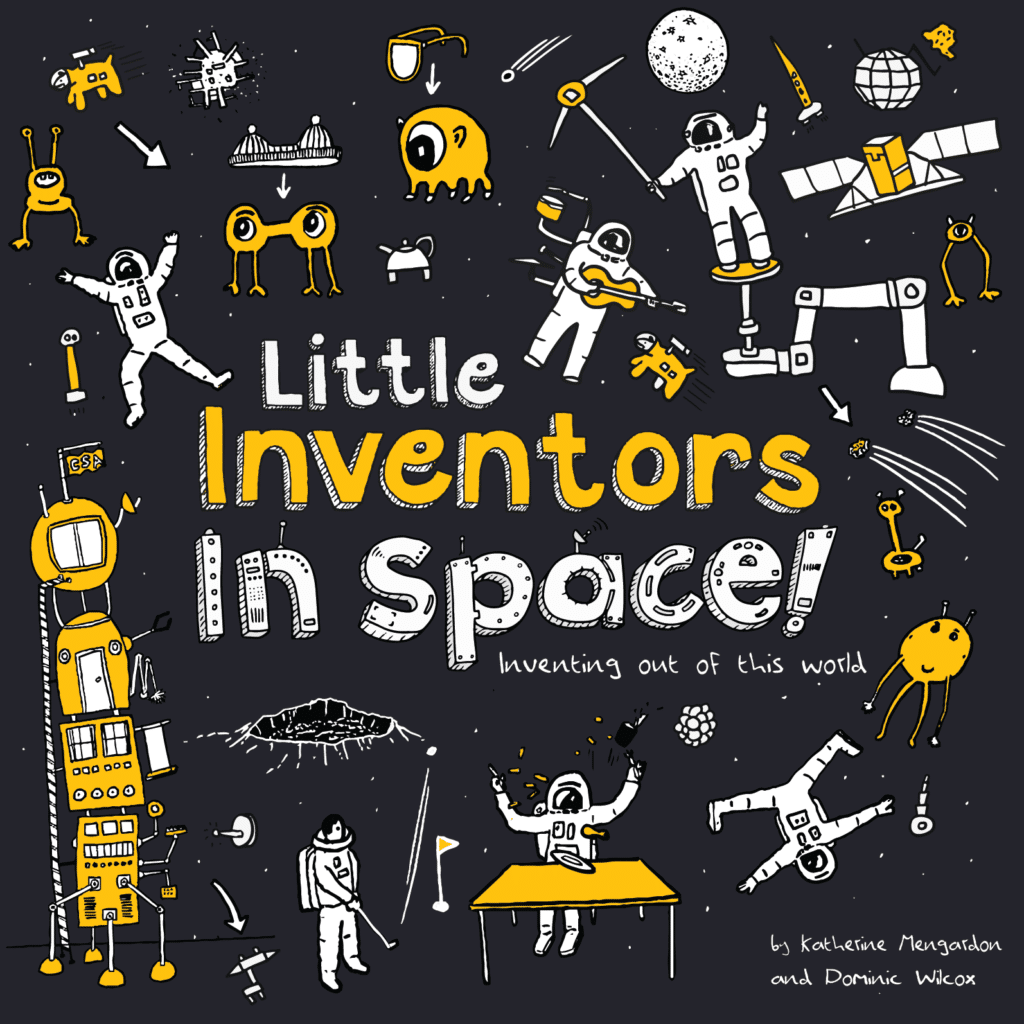 AtlasAction: Know a little one with a big idea? They can submit their idea here. Get in touch with the team if you want a workshop in your area; or if you’re a grown-up who’s good at making things, join the growing global network of Magnificent Makers.

Back in 2011 in Rwanda, 16 years after the genocide against the Tutsi sent shock waves across the world, creative...
See more
()
United Kingdom

Ask anyone working in construction and they’ll tell you: the industry has been stuck using the same techniques for the...
See more 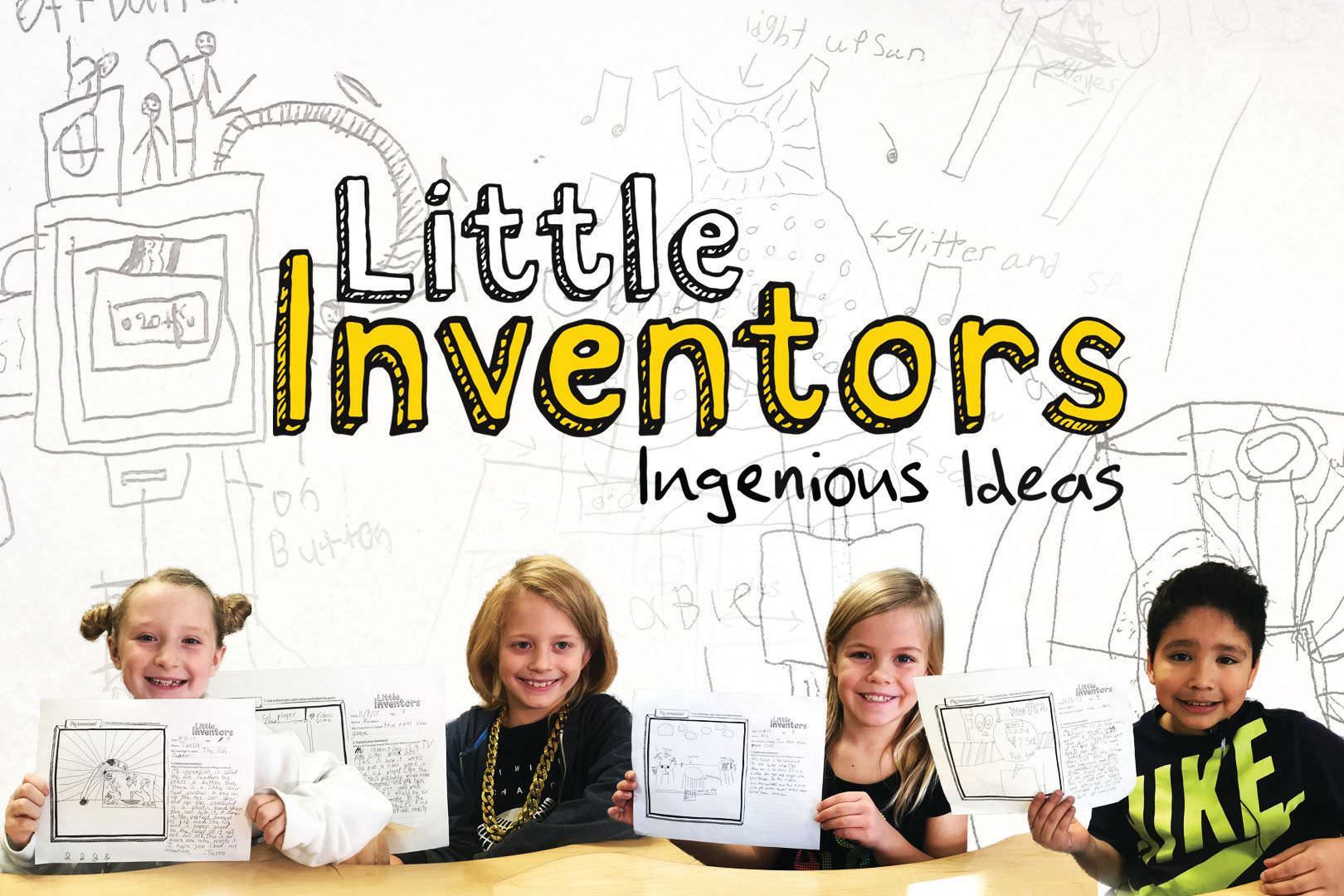 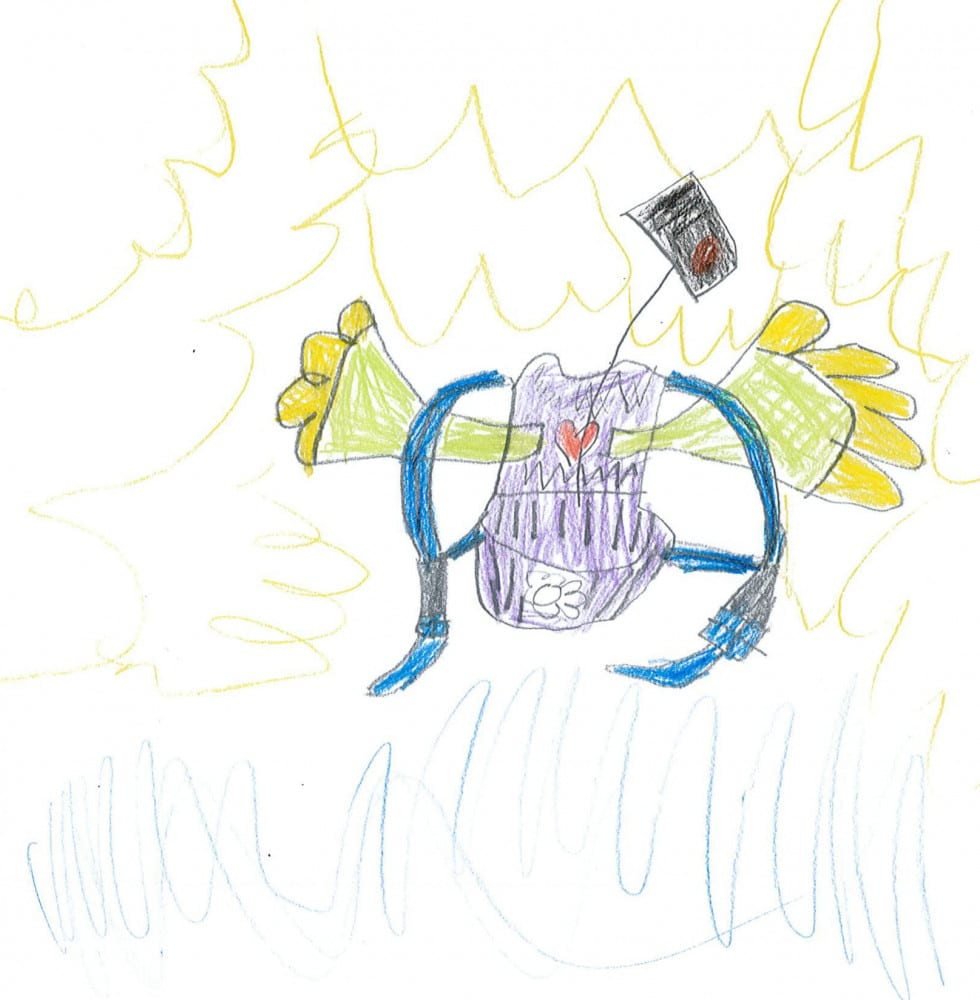 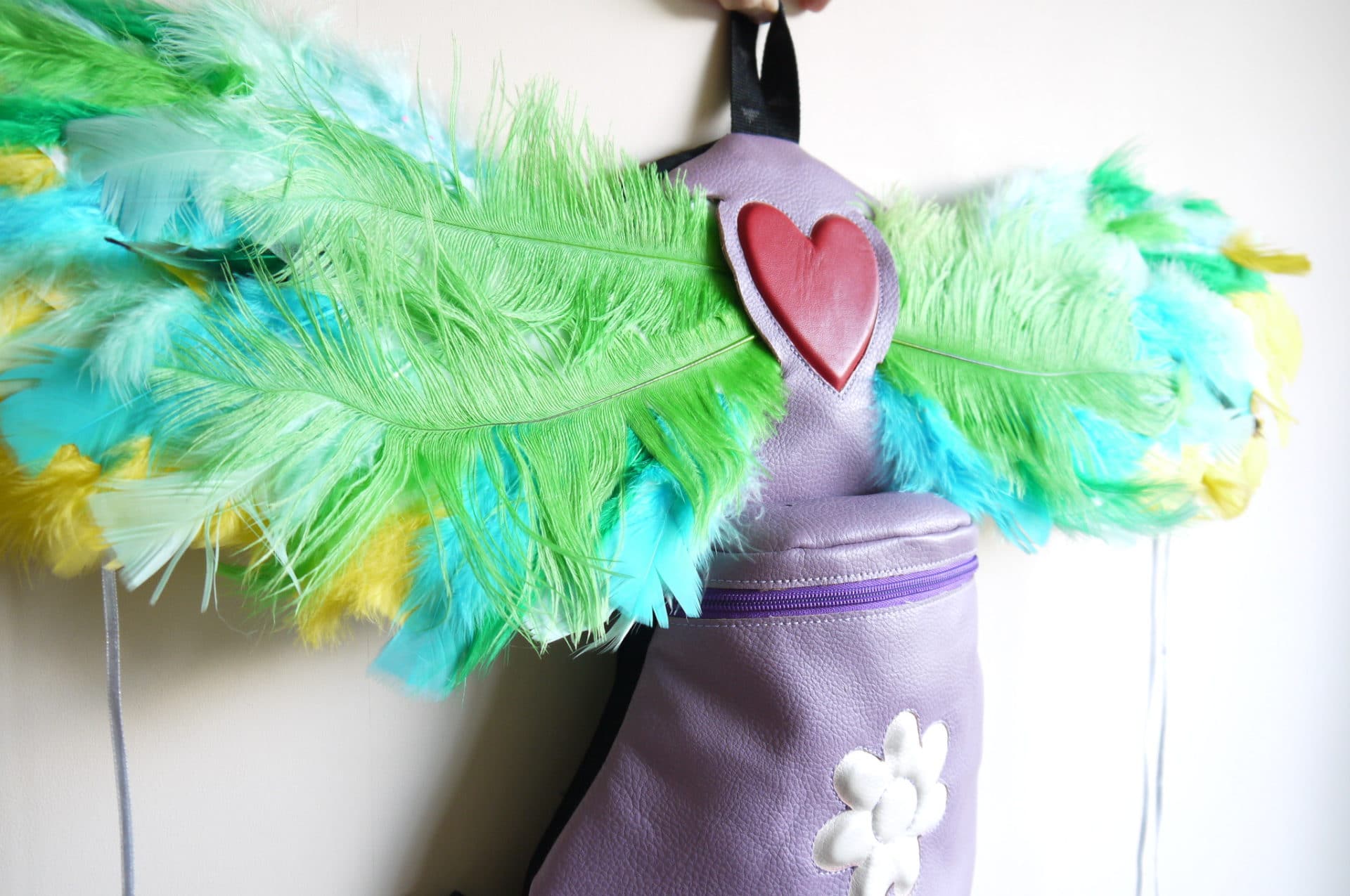 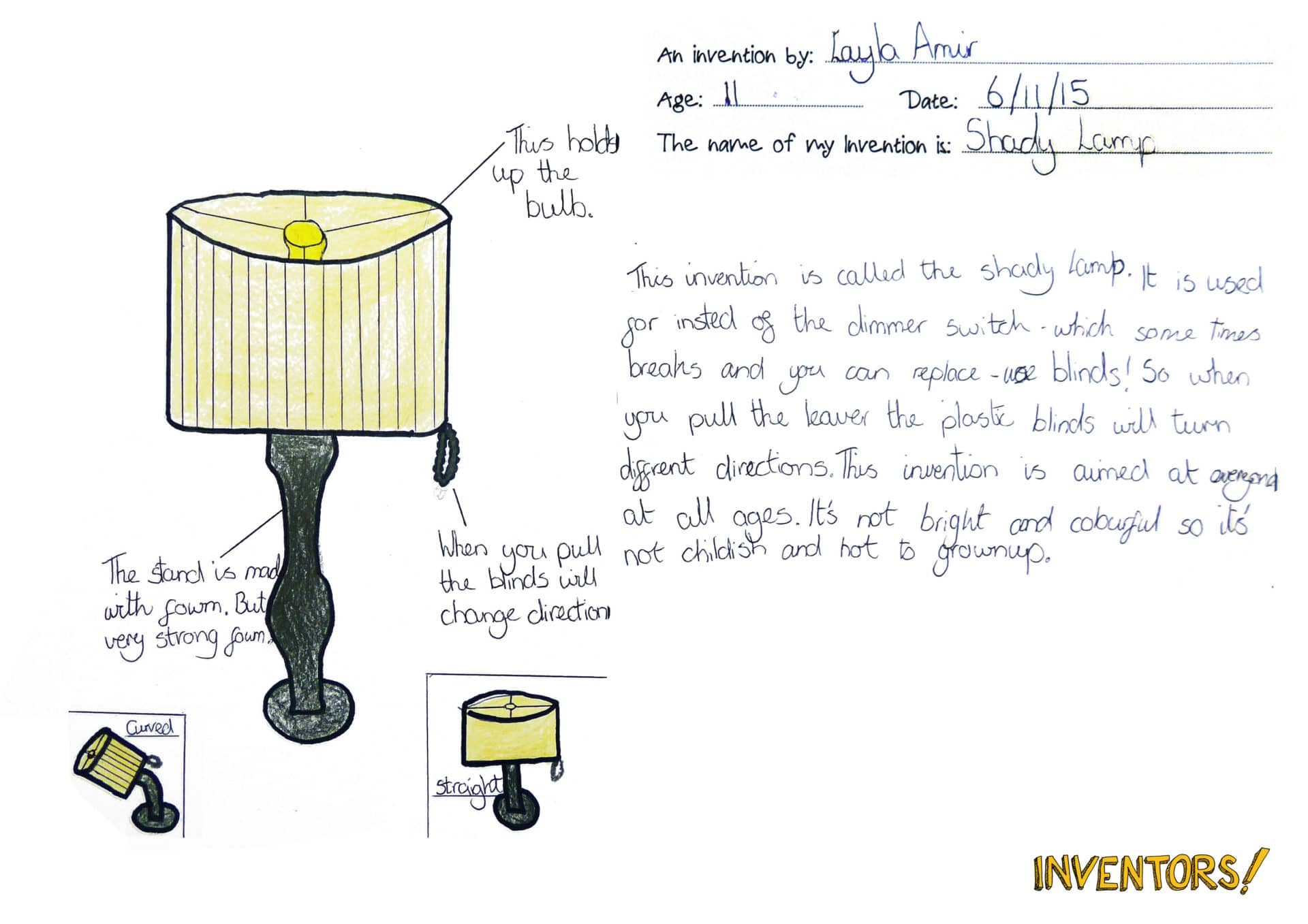 Back in 2011 in Rwanda, 16 years after the genocide against the Tutsi sent shock waves across the world, creative...
See more
()
United Kingdom

Ask anyone working in construction and they’ll tell you: the industry has been stuck using the same techniques for the...
See more