By now you will know of Extinction Rebellion, the global movement changing climate action. So what’s next?

“Troublemakers change the world. No change is possible unless there’s major emotional distress.”

When the landmark IPCC report came out in October 2018 detailing the extent of the humanity-threatening climate crisis, a few things happened. The world panicked, scientists hugged, and a few activists got together to do something about it. And so Extinction Rebellion (XR) was born – a global movement of non-violent, mass civil disobedience aimed at getting governments to take seriously overdue action about the climate crisis 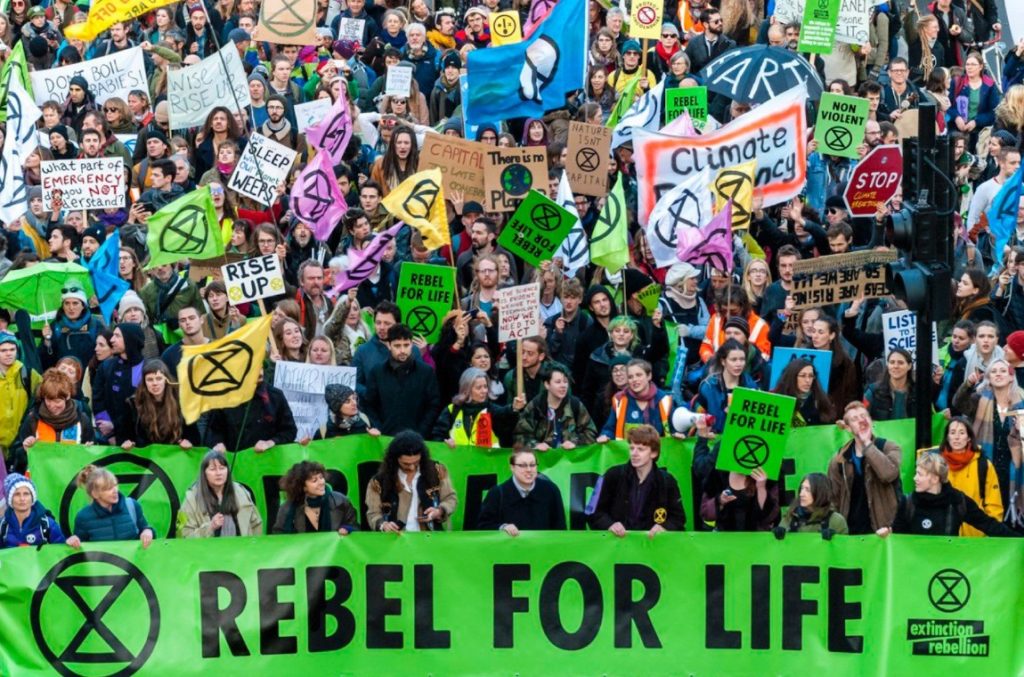 Extinction Rebellion was a long thought-out process that came about as a result of academic research by founders Roger Hallam, Dr Gail Bradbrook, Simon Bramwell, and other activists from the campaign group Rising Up! After 30 years of traditional campaigning (emails, donations) that were ignored, they decided a more unconventional approach was needed. Violence was out of the question (‘“it destroys democracy, leads to war, and is always a terrible idea”, says Roger) So that left just one option – peaceful acts of disobedience, performed en masse by people from all walks of life. People who are prepared to be arrested for the cause. After all, it’s worked before – Extinction Rebellion was partly inspired by the US Civil Rights movement of the ‘60s. 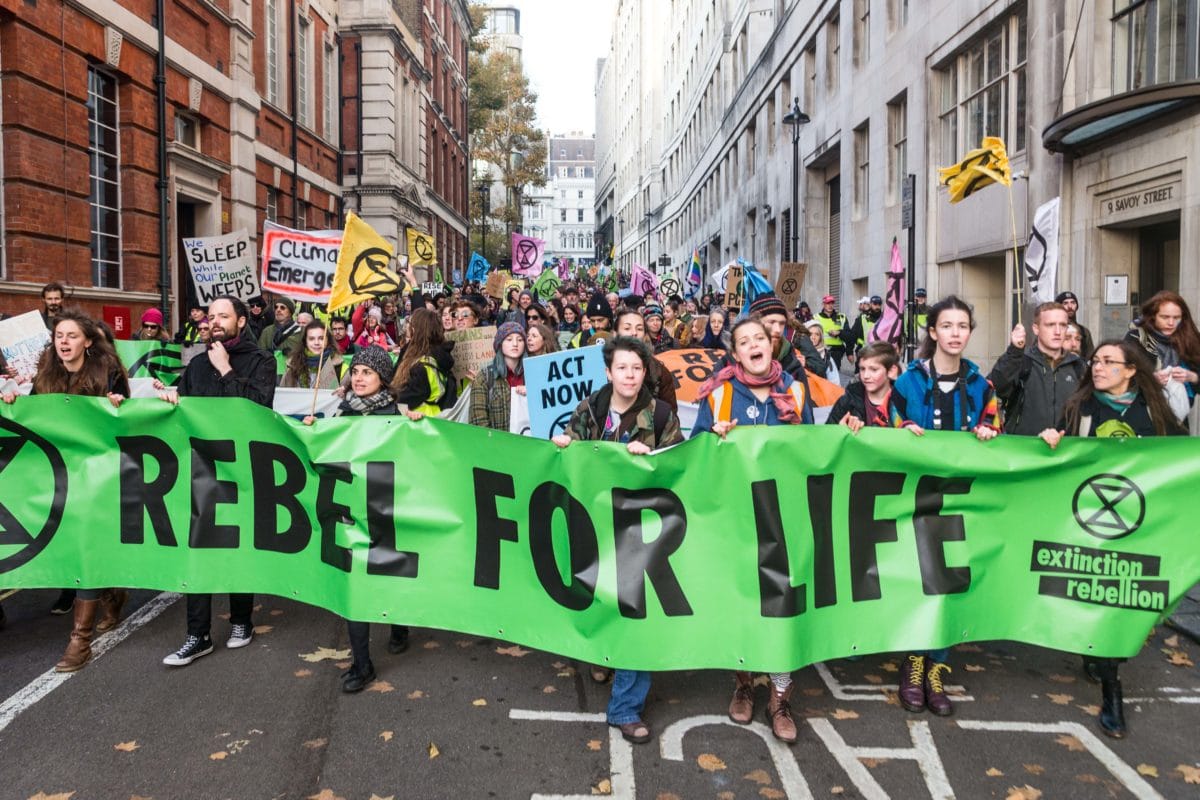 The movement has been gathering momentum at an impressive pace, with 1,139 groups in 75 different countries (and counting). This means regular international protests where streets are blocked, multiple arrests are made, and cities are disrupted. Does it annoy the hell out of people, just trying to get to work and go about their daily business? Of course, but that’s the point. “Troublemakers change the world,” said Roger to the BBC. “No change is possible unless there’s major emotional distress.” 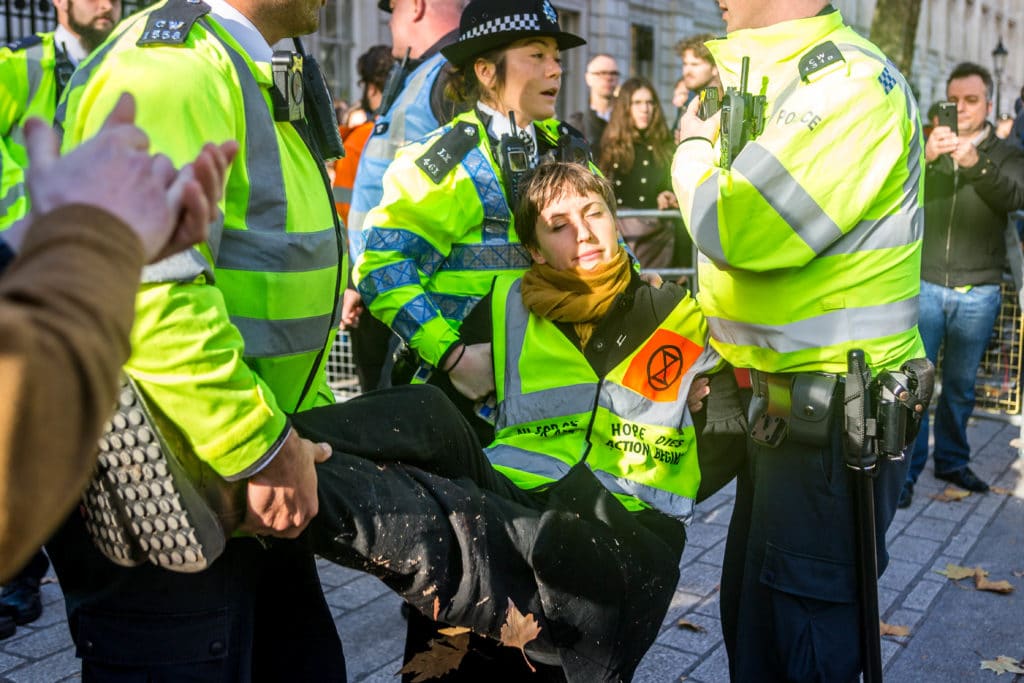 The largest protest to date was the 10-day event in London in April 2019: people young and old came out in droves (and in costume) to barricade roads and major landmarks. They staged a ‘die-in’ at the Natural History Museum, hawled a giant pink boat to Oxford Circus (inscribed with their slogan, ‘Tell the Truth’), poured fake blood outside Downing Street, glued themselves to Waterloo Bridge and occupied Parliament Square – all this leading to hundreds of arrests. (Over 1,000 ‘rebels’ were arrested in total – there was a live count on the XR website.)

The ‘rebellion’ element is central to the movement – hence the name – or as Guardian columnist and environmental campaigner George Monbiot put it in XR’s declaration speech on Parliament Square in October 2018: “The only time that people know it is serious, is when people are prepared to sacrifice their liberty in defence of their beliefs.”

But it’s not all crime and punishment – the protests have also got to be fun, and regularly draw in musicians, artists and performers. (“Like a mini Glastonbury on the streets”, joked Roger). The group believe that creative, family-friendly actions help get the message across to a wider audience in a way that’s inspiring.

As it turns out, blocking central London over several days while also having a laugh is quite successful in getting an important message across. During the protest, XR stole the headlines and started a national conversation about the climate and ecological crisis. Parliament debated the issue for the first time in years before declaring a climate emergency (with several cities across the world following suit). In doing so, the UK government met the first of XR’s three core demands – the others are to halt biodiversity laws and go carbon neutral by 2025; and create a citizens assembly on climate justice. 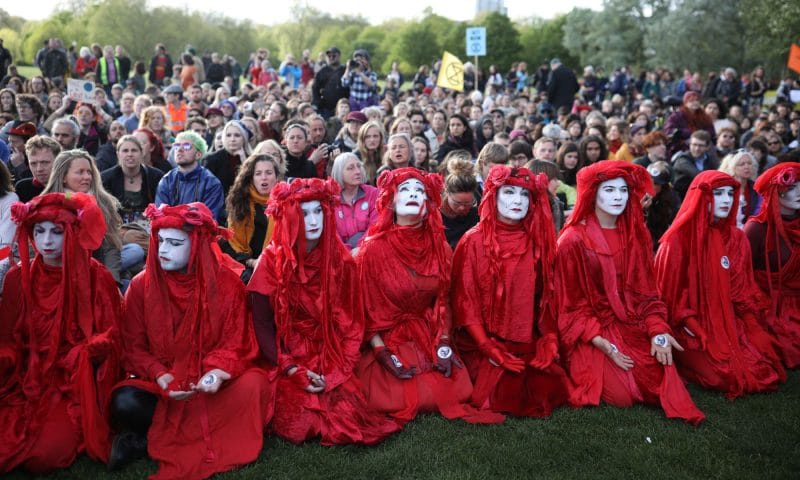 It’s an achievement that they’re proud of, but it’s not enough, not yet, the organisers admit. The UK’s current commitment to reduce carbon emissions by 2050 is simply too little, too late. In order to limit warming to the recommended 1.5ºC, global net CO2 emissions have got to reduce by 45% from 2010 levels by 2030. Without urgent action, the UK is predicted to miss legal targets. “As far as we’re concerned, actions speak louder than words. Until [the government] begin taking radical action, we will continue with our rebellion,” promises XR spokeswoman, Alanna Byrne.

And yet in the midst of despair, there is hope and there is joy. “We meet amazing people from all walks of life, religions, colours, backgrounds,” says Alanna. “Parents, grandparents, kids, seasoned activists and people who have never protested before in their lives. We all share a common sadness and determination, and deep love for the natural world. And there’s something immensely powerful in this.”

“When I look at my grandchildren, I try to imagine their futures. It’s never too late to stand up and be counted. I’ve protested and been arrested, too.” – Hazel Mason, 71, London, Founder of the Extinction Rebellion grandparents’ group

Events in 2020 have made the XR’s mass mobilisation strategy and funding much harder to execute in what was meant to be a landmark year for climate action. The pandemic has filled XR with “both hope and fear”, but there’s also a sense that we can rebuild something new and create a more just society. The movement’s future will be defined by its ability to make people from all parts of society feel empowered. Amen to that.

AtlasAction: XR were speakers at Fixing the future in Barcelona. Join the international rebellion.

The SFS team hosting an online workshop in May 2020
No one can change the world – or in this case, the fashion industry – on their own. Which is where Sustainable...
See more
India (Pune)
India (Pune)

This robot watches over sewers in Indian cities

A startup in India is using AI to address the growing urban problems of water loss and pollution, by predicting...
See more 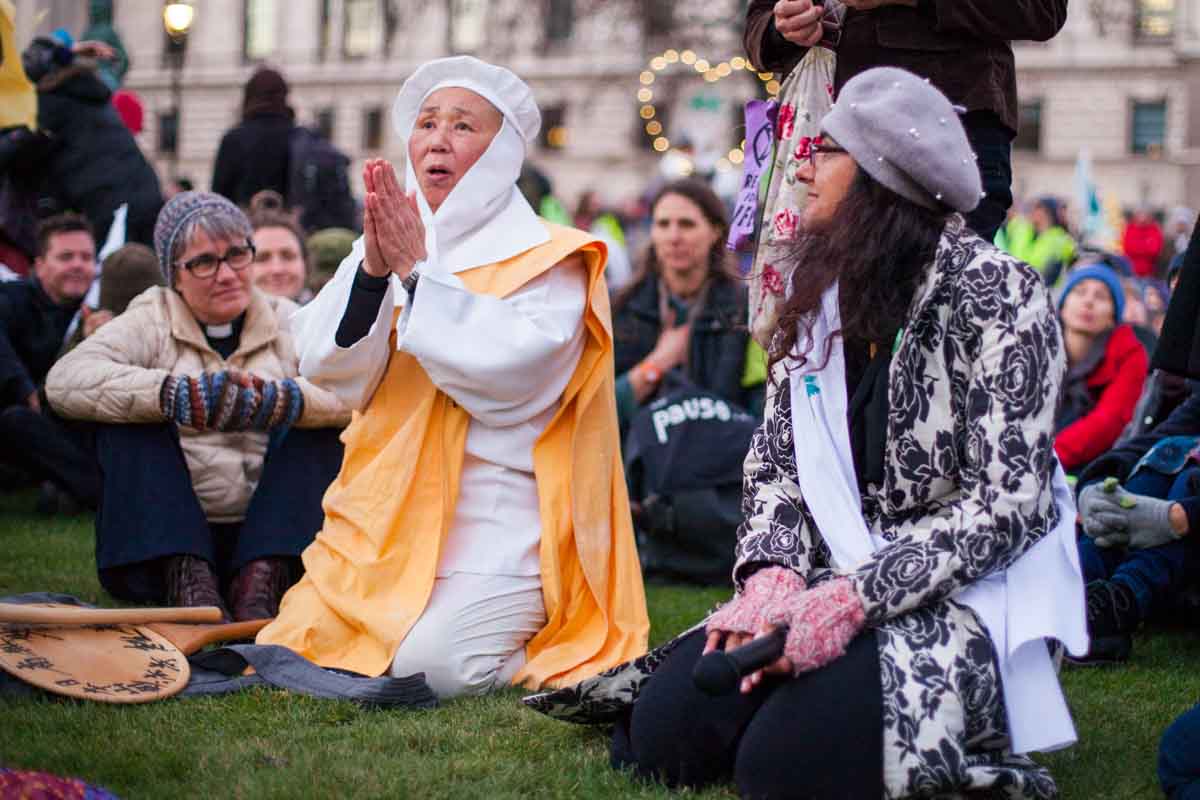 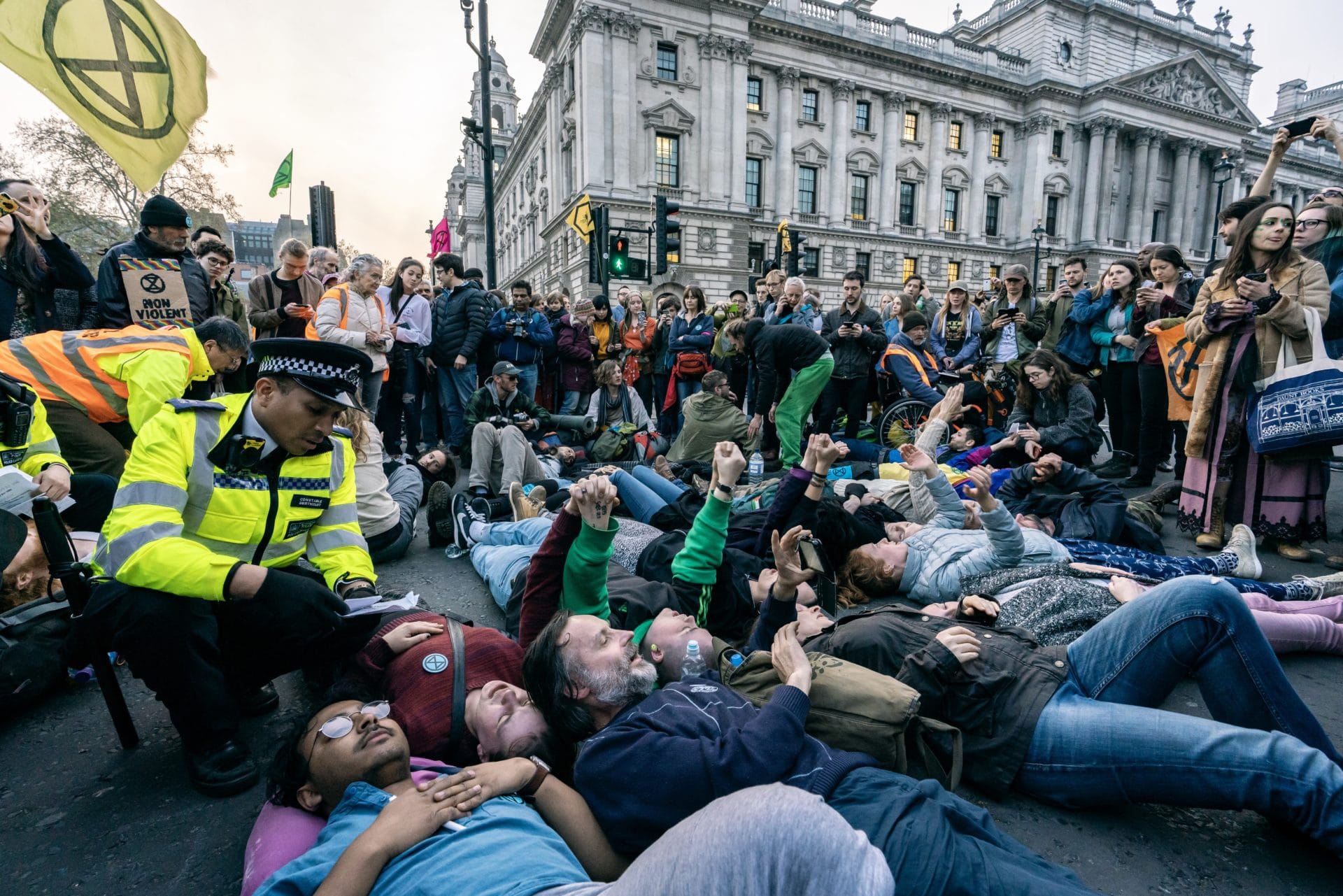 The SFS team hosting an online workshop in May 2020
No one can change the world – or in this case, the fashion industry – on their own. Which is where Sustainable...
See more
India (Pune)
India (Pune)

This robot watches over sewers in Indian cities

A startup in India is using AI to address the growing urban problems of water loss and pollution, by predicting...
See more