What looks like an insect, roams around southern Africa, and farts out balls of fire? A giant dung beetle made out of recycled metal – and a crafty solution to the world’s plastic problem.

It takes some imagination to come up with a beetle-inspired gasification system that converts plastic waste into energy, while at the same time making it fun, fiery and educational. Yet this is exactly what The Dung Beetle Project founders have achieved, and their insect-shaped invention might just change the way the world sees – and treats – plastic waste.

The project’s ultimate aim is to create a new, sustainable economy powered by single use plastic through innovative technology – but science is more accessible when dressed up as a giant, shiny, flame-shooting beetle, figured the founders. Taken from Egyptian mythology, the insect metaphor is a nod to the scarab beetle that was believed to roll the Sun God Ra across the sky, bringing in the new day as a symbol of hope and rebirth. Like its namesake, the mobile art installation turns trash into treasure – or in this case, energy – through a high-tech gasification system hidden in the giant metal ‘dung ball’.

Attached to the beautiful beetle-shaped sculpture is a performance stage exclusively powered by plastic, hosting environmental talks, live music and science communication in association with the non-profit Alliance Earth. The idea is not only to showcase the new technology, but also to inspire hope and change, especially in younger generations.

In fact, it’s the art that drives the momentum behind the project, explains co-founder David Terblanche: “Without the art, you’re just ‘talking at people’ about something that is rather depressing at its core and our natural defense mechanisms try to block out these painful images which make it all seem so overwhelming. By incorporating the art, and the metaphor of rebirth and cleaning up, we can inspire hope much more effectively.” And the fiery ‘farts’? They’re a visualisation of the energy stored in plastic… but also they’re a bit of fun.

Sourced from technology partner Scarab Tech, the machine travels to places in southern Africa where plastic is a problem (rather than transporting plastic and using up unnecessary fossil fuels). “We provide an energy solution perfect for any off-grid location or region without a stable electricity supply, which accounts for much of the third world. Overlay this with the high poverty levels and unemployment in these areas, and you have a labour force ready to collect this waste plastic,” says David. 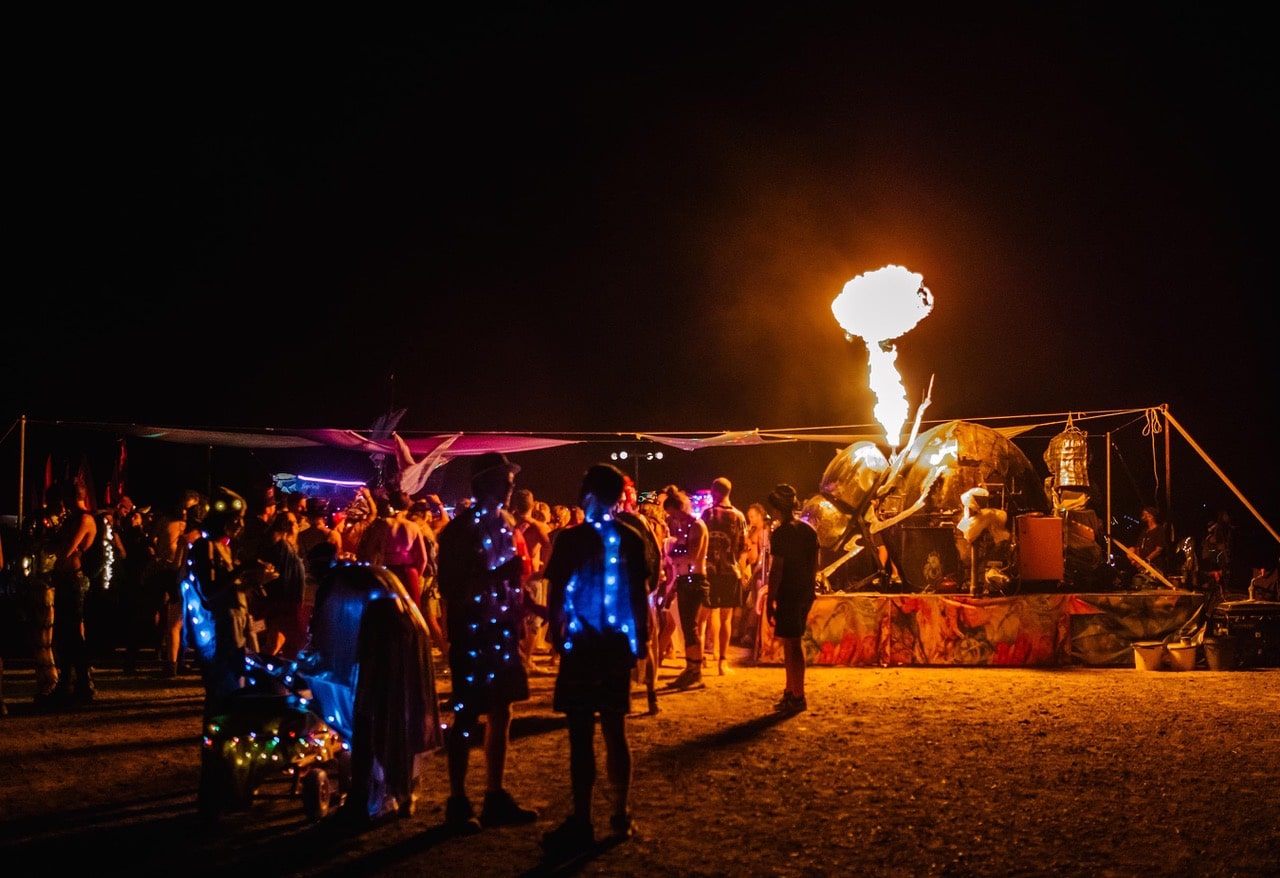 “We don’t see this as the only solution,” he continues, “but as part of a three-pronged approach which explores reducing the plastic produced by industry; recycling and transforming plastic that is already here to energy – and educating consumers about how they can lower their own plastic footprint.”

The idea for The Dung Beetle Project came about over a bonfire at inventor Pierre ‘Pops’ Pretorius’s farm in Limpopo, rural South Africa, not long after he’d finalised a homemade wood gasification system for personal use, which then evolved into a system that could generate power and oil fuels from plastic waste without any harmful smoke escaping. That night, three of the co-founders – ‘Pops’, David and Jeffrey Barbee – started to dream big, then bigger still: what if they upscaled this technology and shared it with the world to tackle the plastic problem?

David breaks down the science: “If you could imagine placing a solid ice cube in a sealed pot with a small outlet, you melt the ice from a solid into a liquid, then heat that liquid until it turns into a gas in the form of steam, which exits the outlet pipe. Similarly we take solid plastic, heat it into a liquid, to create a form of a gas.”

Comparable to how alcohol is distilled, the heavier gases are then condensed into liquid fuels similar to diesel and petrol, and the cleaner, lighter gases power a generator. This is a method of ‘pyrolysis’,  a thermal degradation of materials in high temperatures in the absence of air. 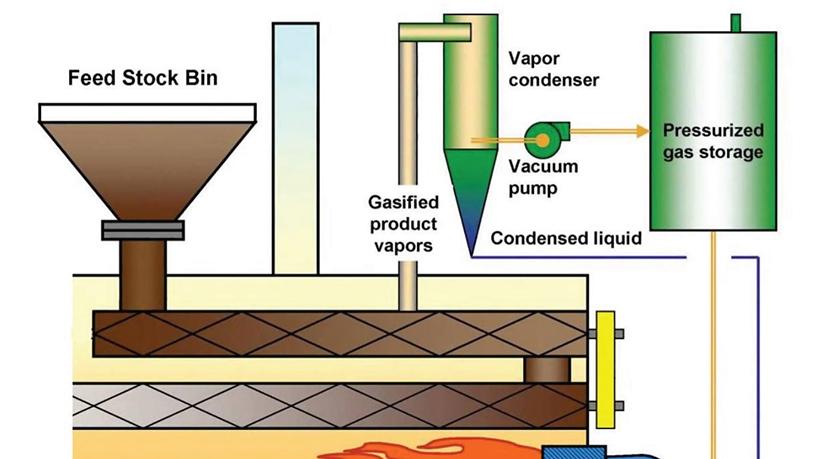 The more they researched, the more incentive they had to get their project up and running, David discovered that massive recycling centres in urban spaces weren’t effective; that only 10-20% of all plastic produced is recycled. And that there was over US$100 million in plastic fuel value dumped every year in South Africa alone, all the while the country struggled with unemployment and the environmental impact of plastic. “This was the moment the lightbulb switched on for us, as we realised we could take steps towards addressing unemployment, third world energy security, and plastic waste through deploying technology like that housed in The Dung Beetle in strategic places, and that a circular economy around un-recycled plastic was possible.”

Their commitment to the cause stemmed in part from growing up in an area where plastic waste was – and still is – rife. “The Umgeni River reaches the sea in the heart of [my hometown] Durban, but sadly it is one of the largest sources of marine plastic waste in the South West Indian Ocean,” explains David. “As a surfer, I would sit in the line up and watch plastic float by me and wash up on my home beaches after every rainfall, making me depressed about the impact of humanity on this place I love. However, as we explored the idea of The Dung Beetle Project further, I started to feel hopeful that we could do something about this problem by sharing appropriate technology in places most impacted by plastic waste.”

Now backed by a multidisciplinary team across top universities (among them Oxford University), as well as NGOs, entrepreneurs, scientists and municipalities across the globe, The Dung Beetle Project has gained huge momentum since its inception. There’s an increasing demand in the USA and beyond for the Scarab Tech machines – with the latest models able to process as much as 750kg of plastic per day – while other long-term plans include fundraising and incubating community-based circular economy projects around the world.

And yet, as impressive as this all is, sometimes it’s the little things that give the greatest sense of accomplishment: “Watching school children being inspired by our message of hope… Seeing a child’s eyes open wide and sparkle as they witness the fire-farting Dung Beetle transforming plastic into usable energy has given us the most joy,” says David.

AtlasAction: Keep up to date with the flame-farting movements of the Dung Beetle Project here.

Sex and garment workers: life thru her lens

Accompanying app
Today, smartphones are as fast as 120,000,000 Apollo 11 computers, which were capable of taking people to the moon. If we...
See more 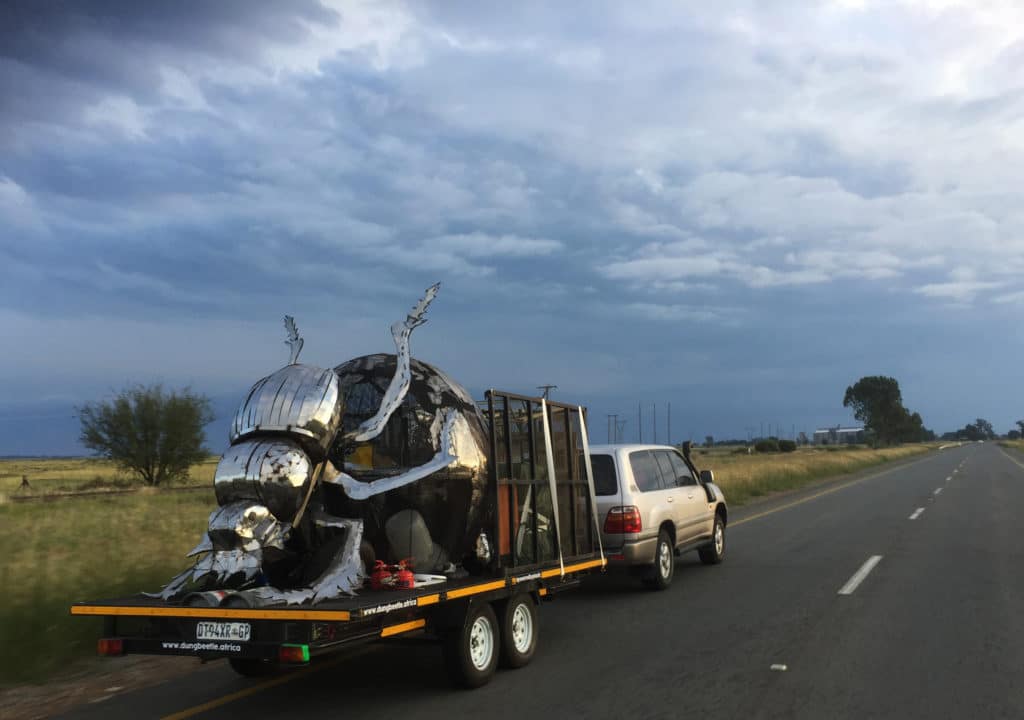 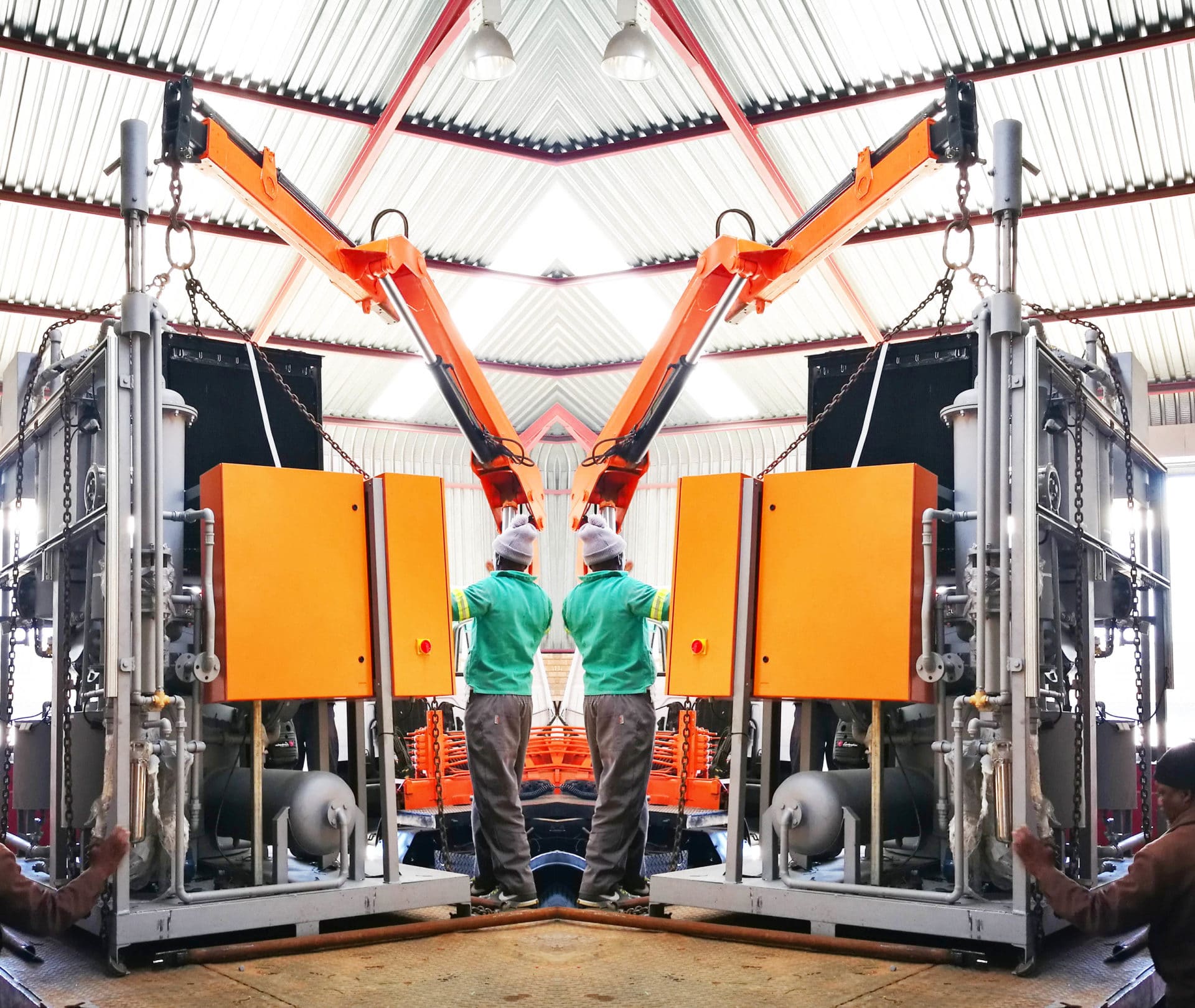 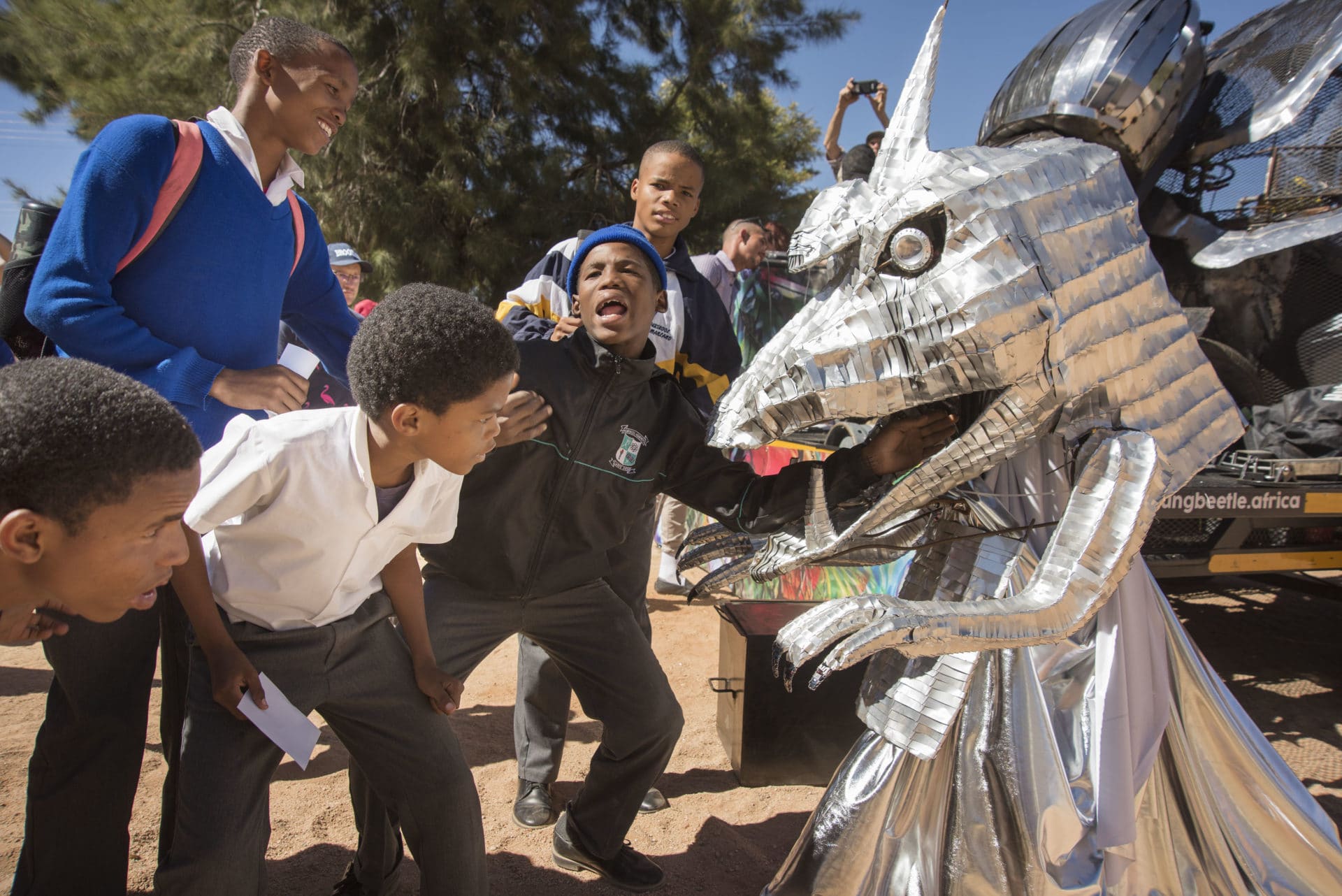 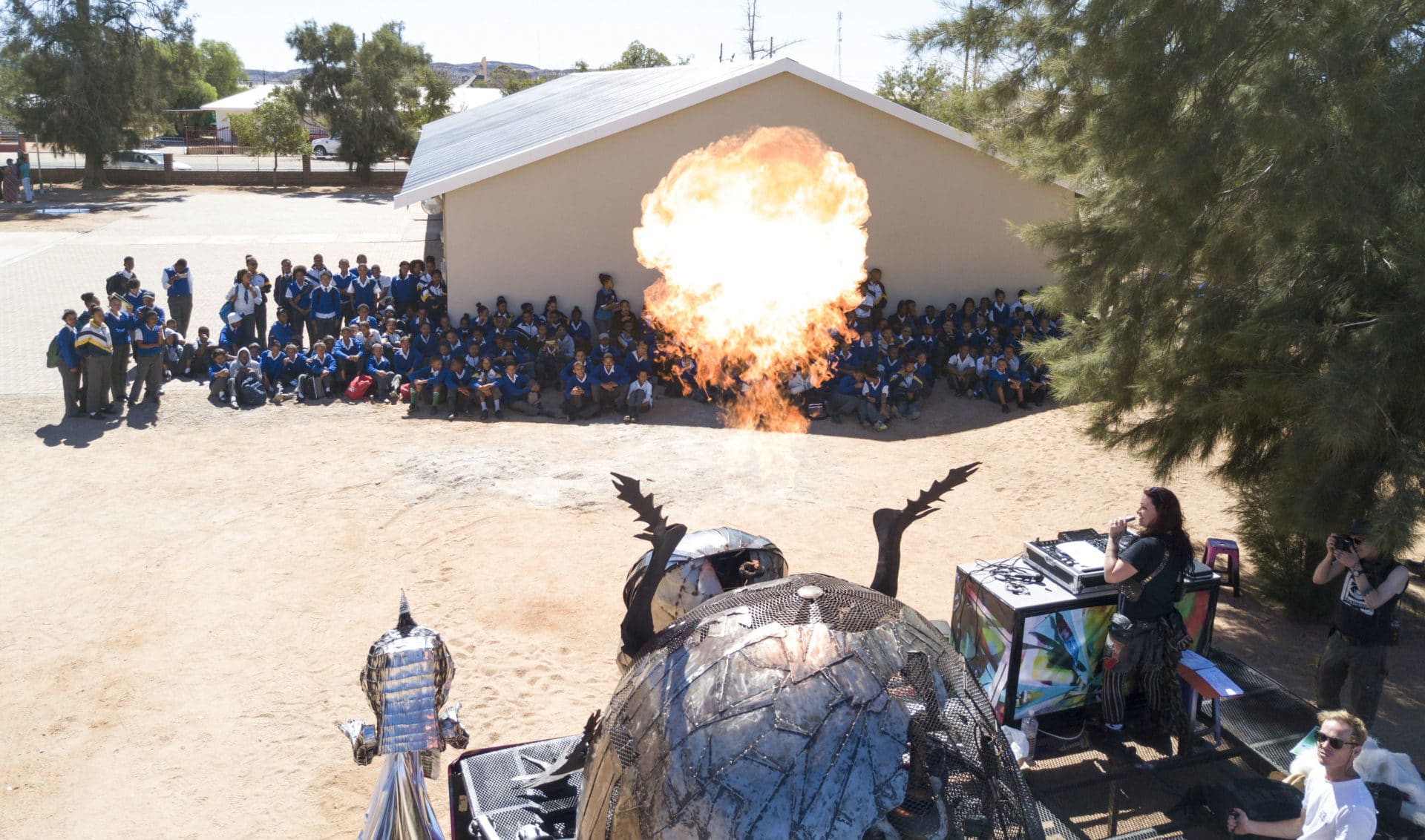 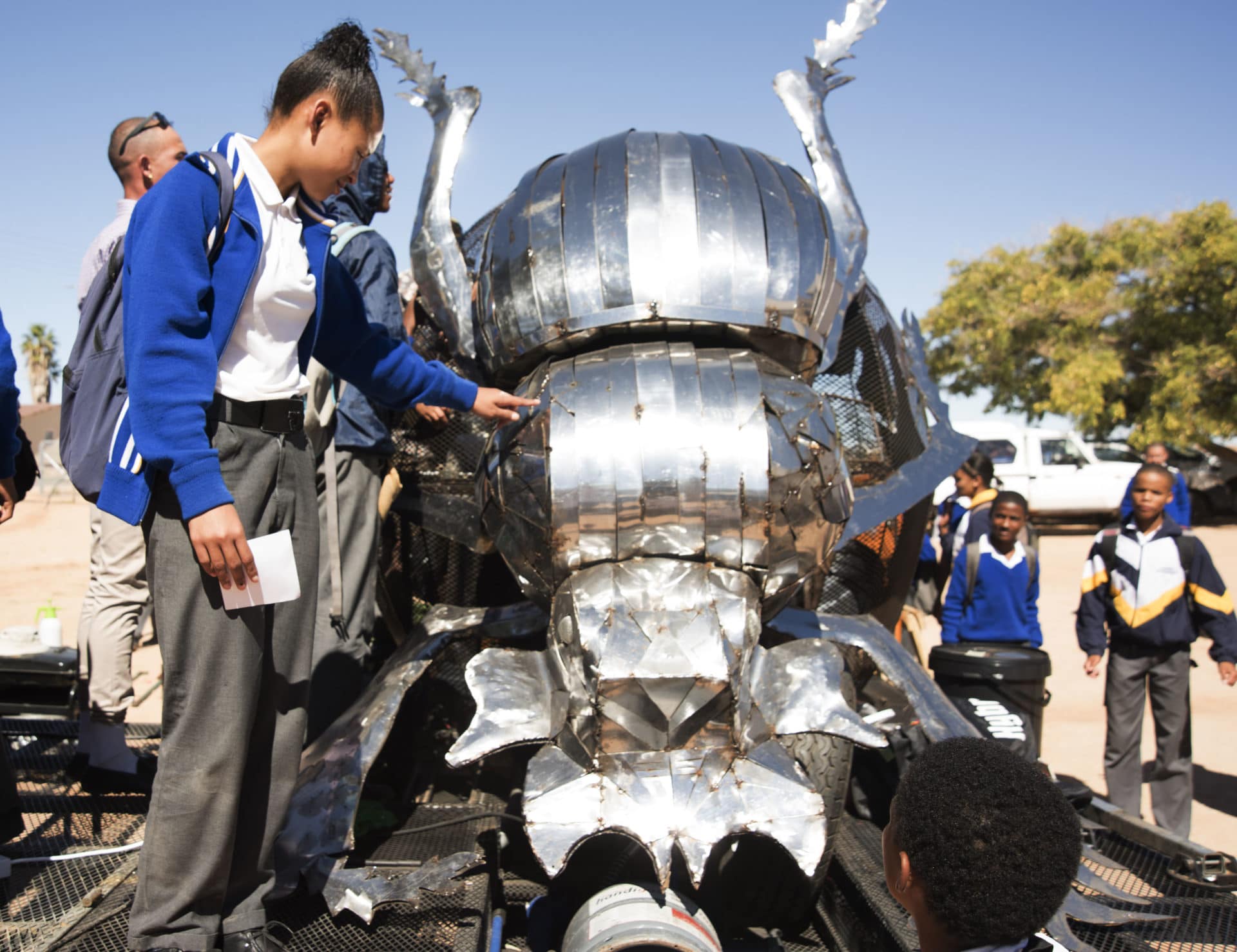 Sex and garment workers: life thru her lens

Accompanying app
Today, smartphones are as fast as 120,000,000 Apollo 11 computers, which were capable of taking people to the moon. If we...
See more