Cycling Without Age is a movement – literally – that’s creating a sense of freedom, joy and happiness in an awesome meeting of generations.

Who wouldn’t love wind in their hair, without having to put in the pedal power? Cycling Without Age is a project founded on the ideals of Danish cycling culture – that no one, no matter what age, should be restricted from riding a bike.

“Life unfolds at all ages, young and old, and can be thrilling, fun, sad, beautiful and meaningful. This is about letting people age positively, interacting in their local community.” – Ole Kassow

It was started in 2012 by social entrepreneur Ole Kassow, who got the idea when he passed by an old man sitting on a park bench in Copenhagen on his bike ride to work each morning.

After having heard several stories about the older generation missing the freedom, joy and mobility of cycling, he decided he wanted to get people back on their bicycles, but had to find a solution to their limited mobility. One morning, he showed up at his local nursing home with a rented trishaw (a three-wheeled cycle rickshaw), offering free rides to the local nursing home residents. 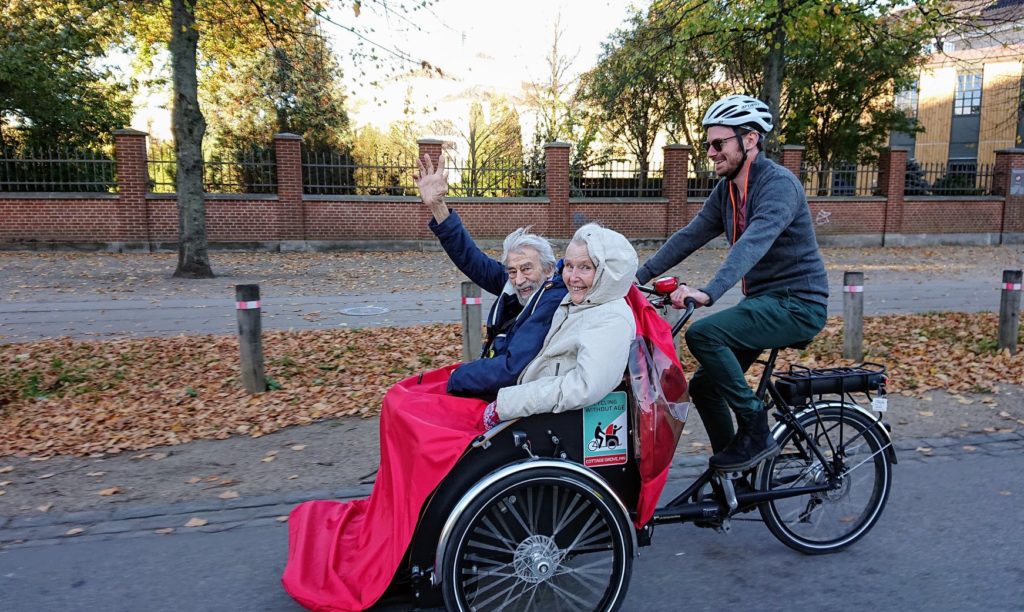 He then got in touch with a civil society consultant from the City of Copenhagen, Dorthe Pedersen, who was intrigued by the idea, and together they bought five trishaws and launched Cycling Without Age.

Today the international network of volunteers helps older passengers get out and about in all corners of Denmark and has spread to another 50 countries around the world since that first ride in 2012; with more than 33,000 volunteer cyclists (called ‘pilots’) and over 3,000 specialised trishaws. Over 1.5 million people have taken a ride with members of the global network; slowing down, taking in the scenery and enjoying conversation from Canada to Singapore.

The oldest pilot is 90, Jørgen Hass in Denmark, and the oldest passengers are Madam Yeo Iu, Singapore, and Dagny Carlsson, Sweden, both 107. And if that ain’t joyous, I don’t know what is. 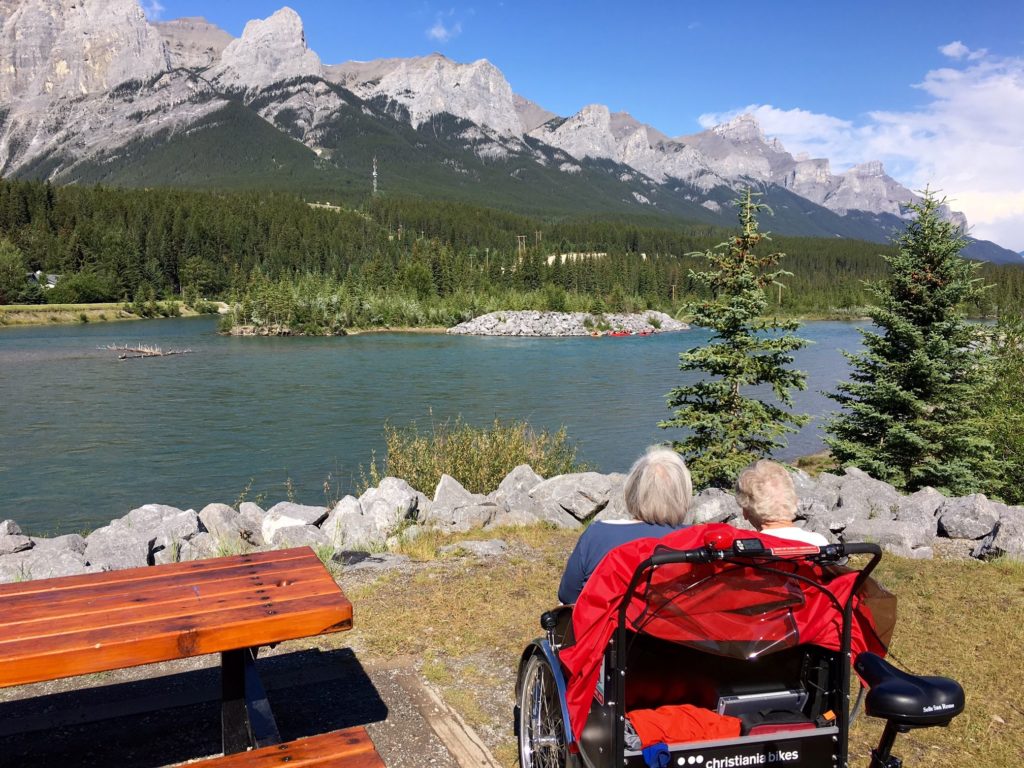 Ole says he dreams of creating a world together, in which the access to active citizenship creates happiness among our fellow older citizens by providing them with an opportunity to remain an active part of society and the local community: “We do that by giving them the right to wind in their hair, the right to experience the city and clear their mind in nature close up from the bicycle – and by giving them an opportunity to tell their story in the environment where they have lived their lives. That way we build bridges between generations and we reinforce trust, respect and the social glue in our society.” 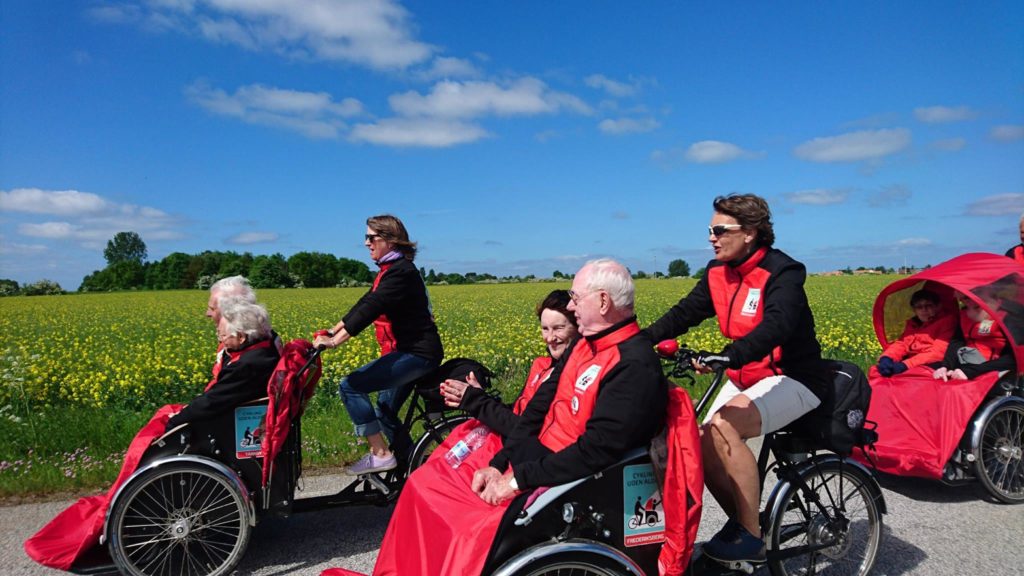 Based on generosity and kindness, Cycling Without Age starts with a simple act that everyone can do, taking less-abled people out on a bike ride. The slowness of a rickshaw allows passengers to sense the environment – whether it’s through the city, to the forest, the waterfront or even down memory lane – often stopping to chat with curious people along the way.

The bike has a battery pack with just enough power to aid the extra weight of two passengers on inclines. Neither the cyclists, called ‘pilots’, nor the passengers pay or get paid. This is a voluntary activity, to bring life and joy to those who have lost some of their independence and mobility through age or infirmity.

Pilots get as much out of the intergenerational conversations as the passengers, with memories often triggered by these trips. Through the rides, youth have opportunities to engage with seniors in an active setting, allowing them to have meaningful dialogues and learn about the past. Ole explains: “Older adults have so many stories that will be forgotten if we don’t reach out and listen to them. We tell stories, we listen to stories on the bike and we also document the stories when we share them via word of mouth or on social media.”

Essentially, the problem that Ole is addressing is social isolation and loneliness associated with old age. “We can structure society to create isolation or we can structure it to prevent isolation.”

Now is a time when people can feel the value of empathy, as the pandemic has allowed us to better understand feeling isolated or vulnerable. In Portugal, Cycling Without Ageing volunteers have organised fleets of trishaws into a shopping and delivery service for groceries and medications. The volunteers have also been experimenting with filming the view from ride, so anyone can watch online. “Now someone in Minnesota can enjoy a bike ride through Copenhagen or the forest. It keeps the relationships going and it keeps the spirit, hope and sense of shared adventures going.”

For Cycling Without Age, Ole received the Danish Community Award 2014 from the Danish Ministry of Employment and in 2017 he was the second Dane to become Ashoka Fellow, the world’s leading NGO for change-making and social entrepreneurship. He is also co-founder of Purpose Makers, an organisation that helps strengthen organisations by implementing in them the values of kindness, generosity, and purpose.

AtlasAction: Everyone can learn to ride a rickshaw and become a ‘pilot’.to make a difference in a rewarding community while meeting new people and even getting some free exercise. Volunteer here.

Going in circles to make plastic a resource

They might not be taking clothes to space, but the AWAYTOMARS crowdsourcing collective have found a new frontier in the...
See more 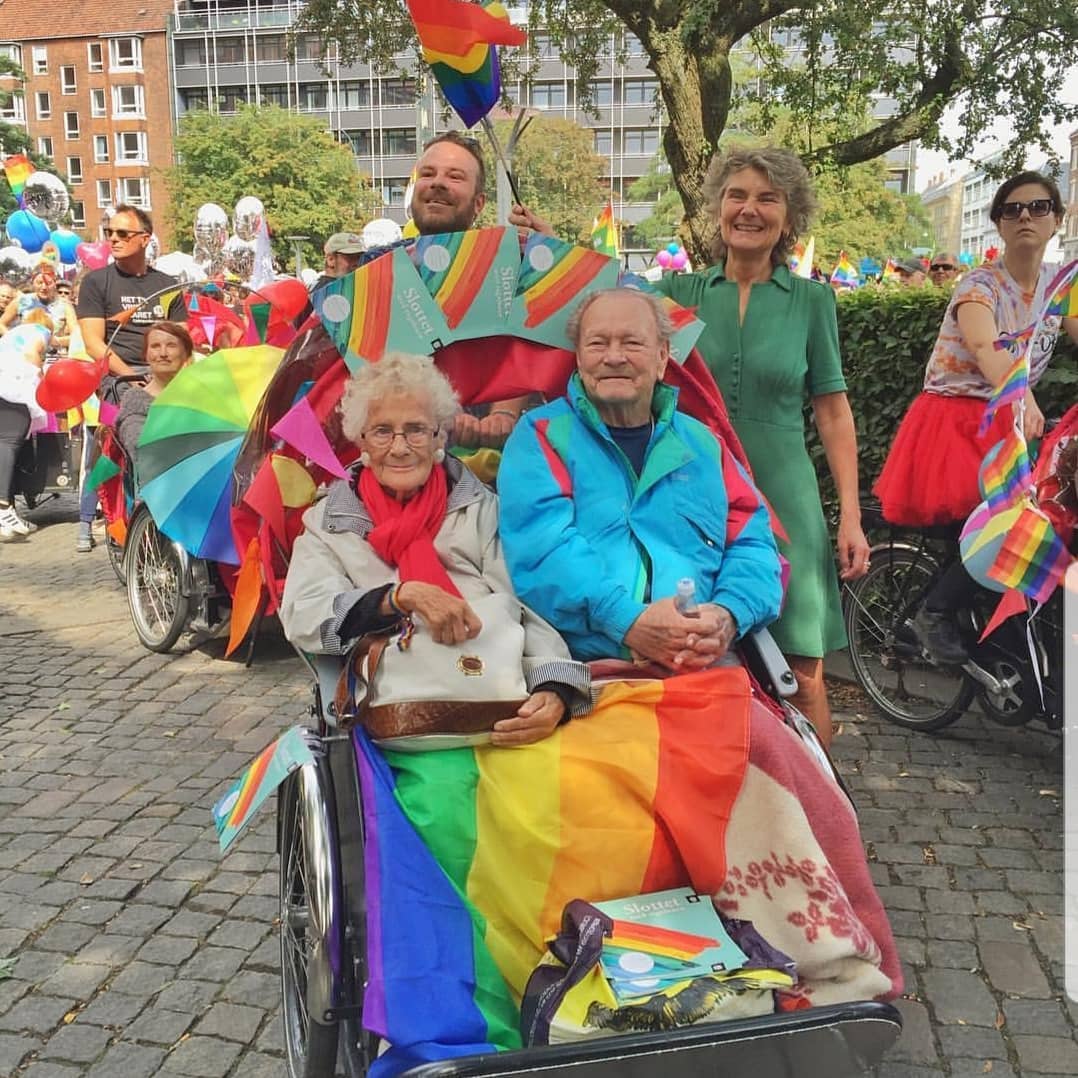 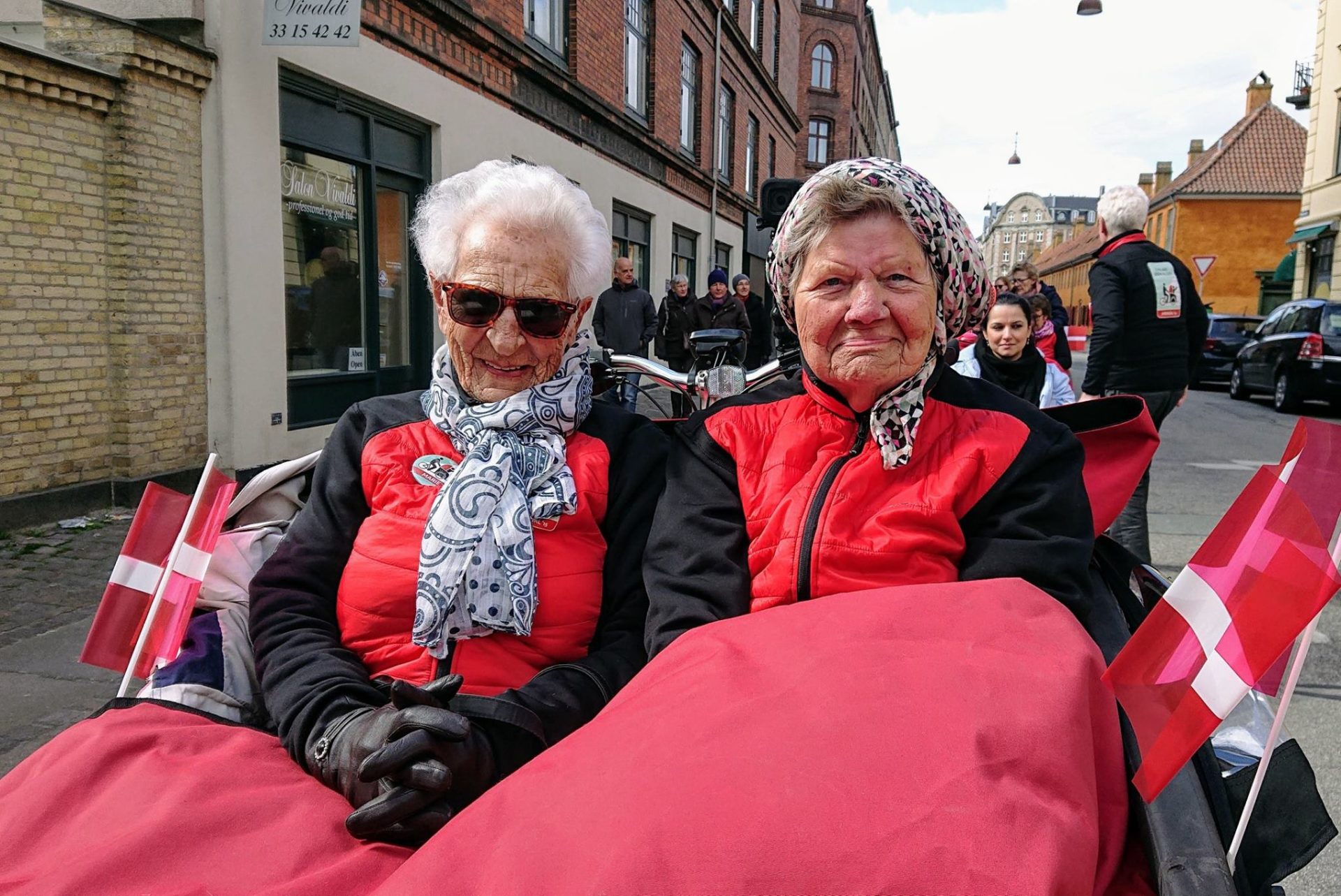 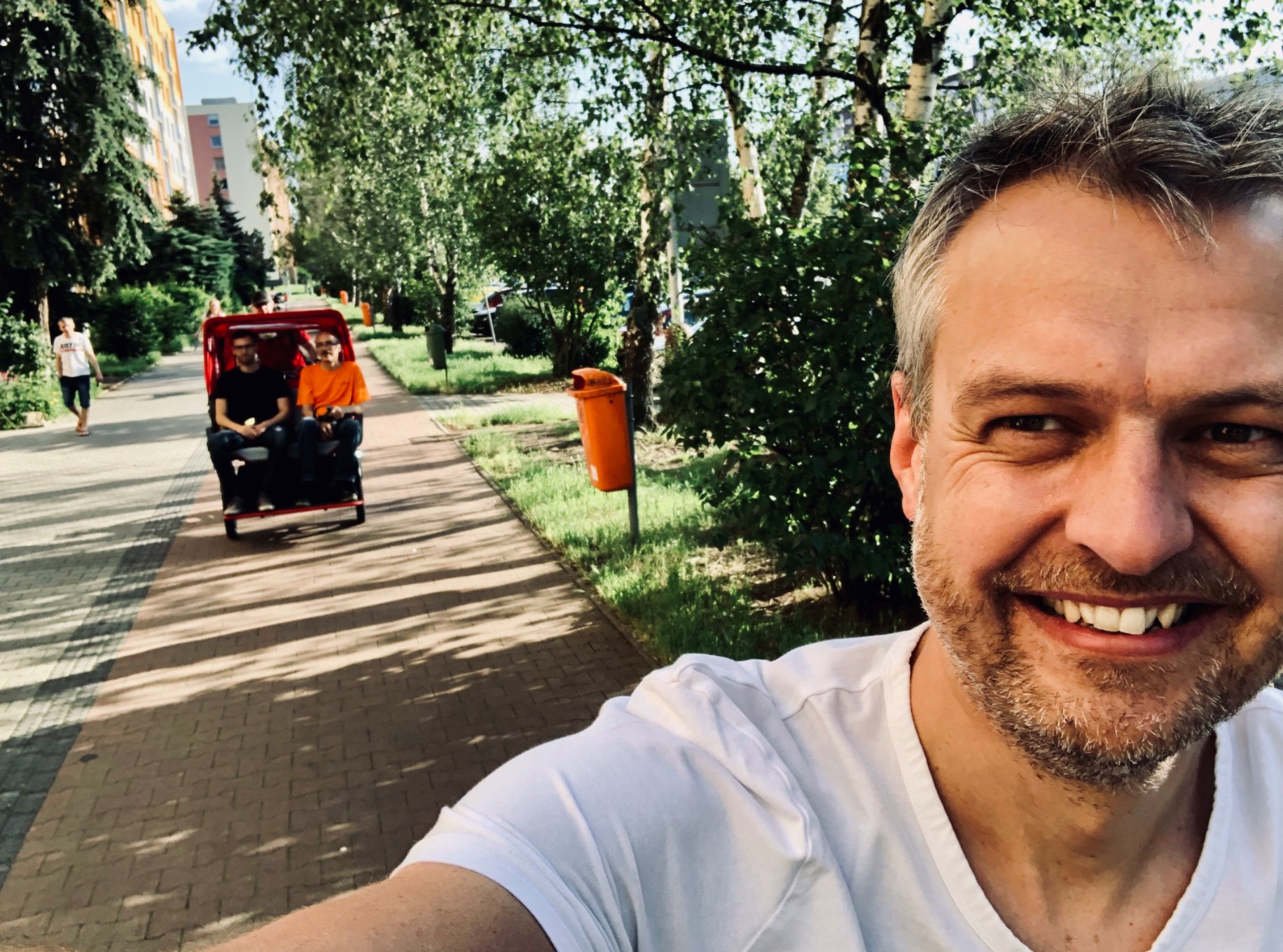 Going in circles to make plastic a resource

They might not be taking clothes to space, but the AWAYTOMARS crowdsourcing collective have found a new frontier in the...
See more