The Drones for Whale Research programme is on a mission to democratise whale science through cheap and non-invasive technology.

While whales are protected in most parts of the world, many species are still recovering from the commercial whaling of the 20th century. On top of that there are new threats, such as climate change, noise pollution and chemical pollution. However, whales are difficult to study and it’s not always easy to know how best to protect them. The answer, argues Ocean Alliance, is more information and data. 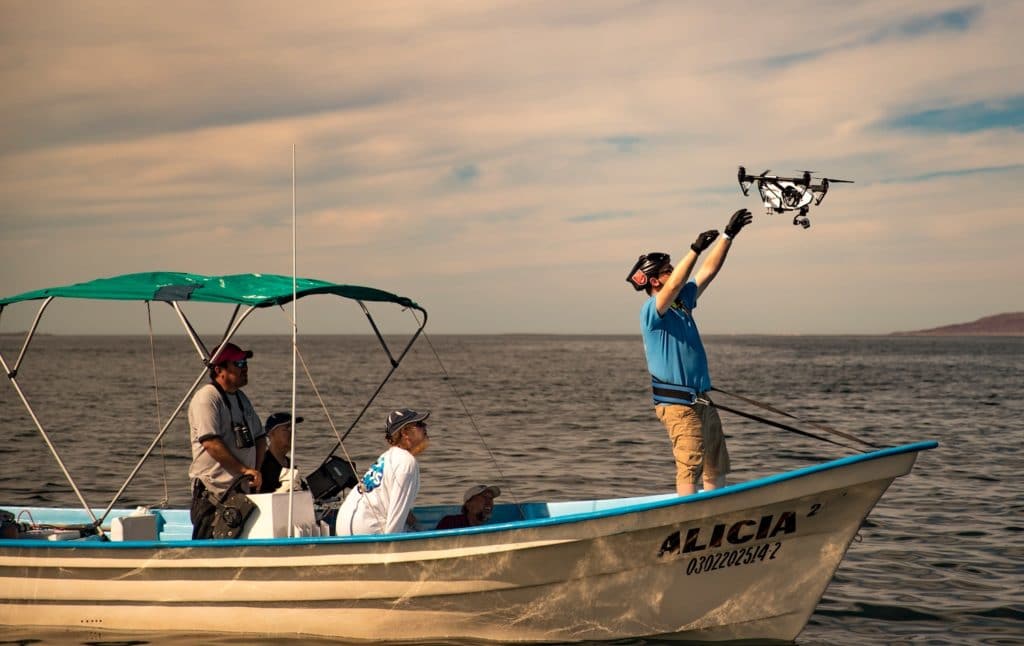 Standing on a boat Iain Kerr, Director of Ocean Alliance, watched the whale dive under the surface just as they pulled up next to it. This could mean a one hour wait before it resurfaced and they could take the samples they needed. But then he noticed the smell coming from the whale’s blow – if it smells this bad, he thought, there must be some organic matter here. This encounter, combined with his hobby interest in drones, was the beginning of Ocean Alliance’s Drones for Whale Research programme.

The first foray into working with drones was the SnotBot, a modified drone that flies through a whale’s blow to collect exhaled ‘snot’ on petri dishes. This matter provides a lot of valuable information for the health and ecology of a whale, such as DNA, stress and pregnancy hormones and microbiomes. Ocean Alliance started prototyping the SnotBot in 2013 and it took up to four years to work out the best way for using the drone.

Science Manager Andy Rogan explains when they began developing the prototype they weren’t sure if they could even collect the samples, let alone what they would find or how the whales would react. Even though they have now developed a way of working with the drones they still adjust the technology to each research project, adapting it to the type of whales they’re studying. 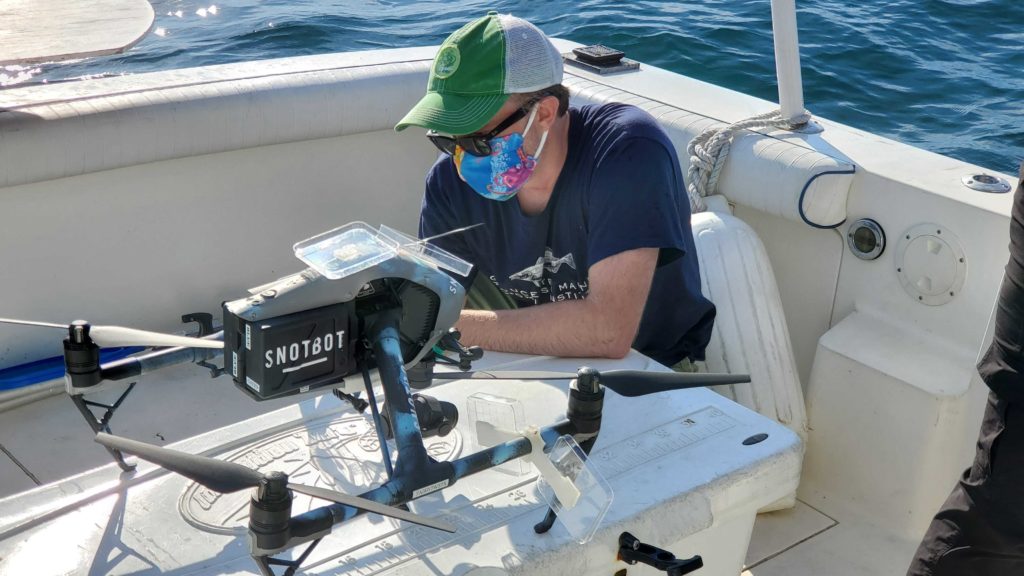 Ocean Alliance aren’t new to whale research, they’ve been at it since the organisation was founded in 1971 by Dr Roger Payne (the biologist who discovered that humpback whales sing). The organisation was founded on the care of whales, and the use of drone technology takes this another step, by developing a research tool that is even less invasive: in 700 flyovers of the drone, there have been only three reactions from whales.

Another advantage to the SnotBot is its affordability. While taking samples in a traditional way (collecting skin or blubber biopsies from whales) was time consuming, expensive and sometimes difficult, a drone can be bought for under US$1,000. This could open up the opportunity to collect data for research groups around the world. 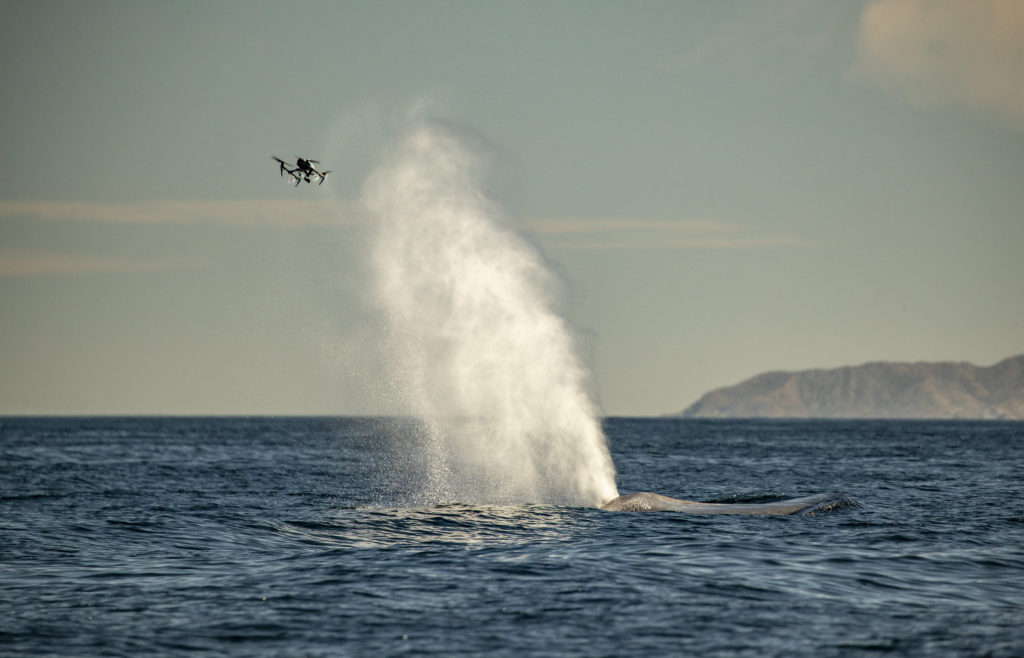 In fact, the Drones for Whale Research programme promotes the wide application of their methods with other researchers, regularly receiving inquiries about how the SnotBot could be used in other regions. When the team conducts a research trip, they work with and train researchers and leave a drone with the local organisations when they leave. As Andy says, “whales in the future are not going to be saved by the big research institutions in the west. You need local researchers, local institutions all across the planet if we’re going to protect these animals and understand them better. And where we’re really trying to focus on with the SnotBot and drone work, is trying to empower these groups.”

After the SnotBot, the Drones for Whale Research programme began exploring other possibilities for drones. This led to the waterproof EarBot drone (which collects bio-acoustic information) and a photogrammetry technique to take more accurate photos of whales (which is a simple yet precise indicator of their health). 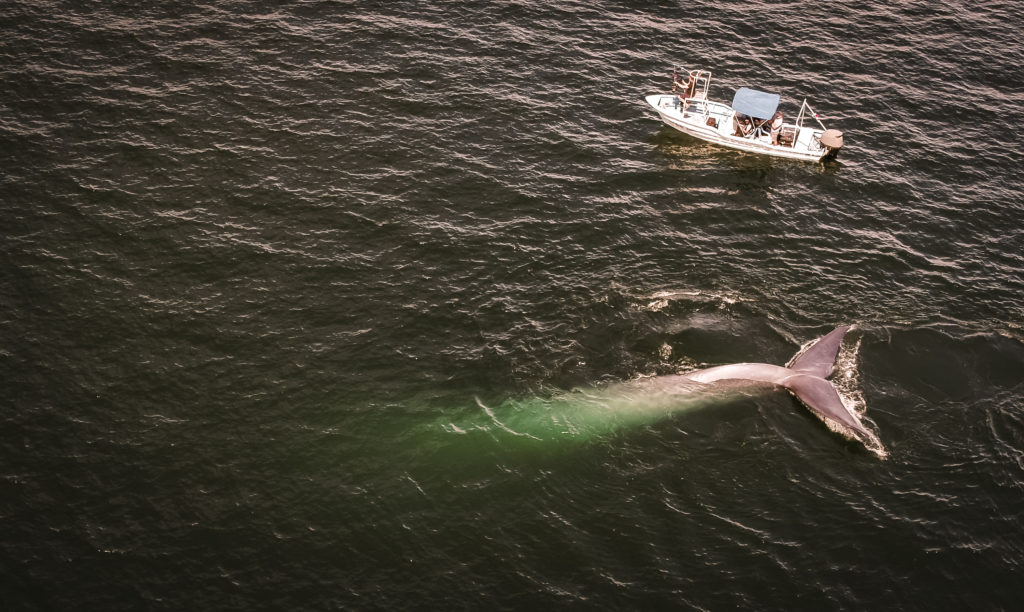 A recent development in the works is a long-range fixed wing survey plane that maps the number of whales in a certain area. Over time these types of surveys would provide valuable information on the stability (or not) of whale populations. The plane has wider implications for marine science in general and would help to monitor coastlines, mangroves, coral reefs and potential illegal fishing vessels. However, as Andy highlights, “This is only valuable if a lot of people can afford to do it.” Currently the technology is still too expensive for most researchers, but they are working on the prototype now so that when it becomes more accessible they’ll be ready to roll it out.

Since 2013 Ocean Alliance has been based in their innovation centre in Gloucester, Massachusetts. Along with being the hub for their research, it is also a place where the local community can learn about the technologies used in their research. In relation to their drone work, they developed a Robotics Club where kids can drop in every Wednesday to learn to fly a drone or even build a robot. They also have a club for girls to improve diversity in STEM fields.

In the future they envisage this centre to be a place where technological innovation and whale research can meet. As Andy explains, “The idea is to try and create this space where other people can come and use the equipment and collaborate and discuss partnerships and discuss solutions.”

In the future Andy hopes that “groups across the whole planet will be using inexpensive, really practical, capable tools to collect enormous amounts of data on whales.” Through this comparable data, scientists will better know how to protect these amazing animals for the future. 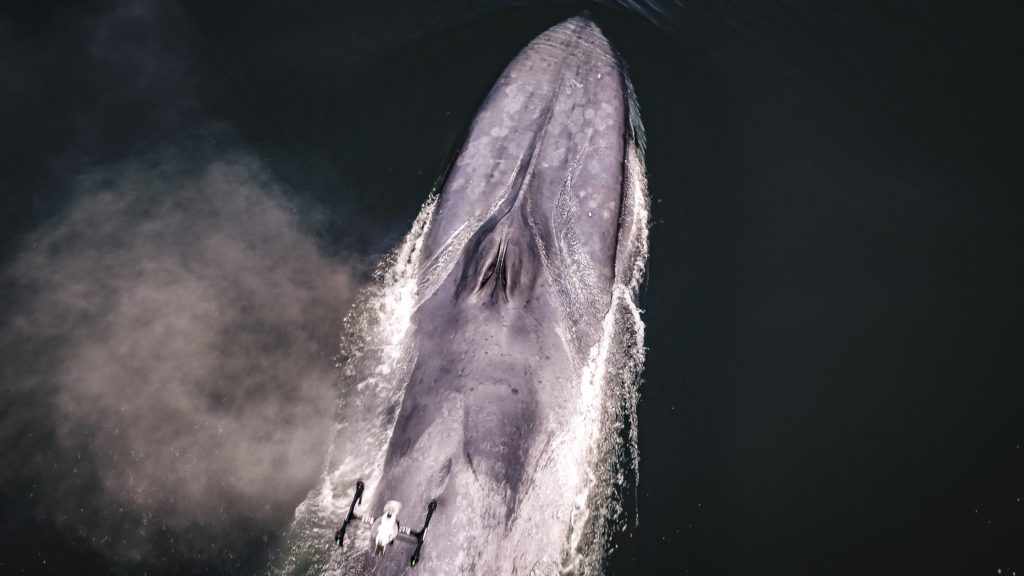 AtlasAction: If you’re a whale scientist contact the team to find out how you can use the SnotBot in your research. Other ways to help out include adopting a whale or getting some great whale-related swag at the Ocean Alliance shop.

Claire is a writer, editor and researcher based in Barcelona, with a focus on arts, cultural diversity and creative expression for social change.

Giving the oceans a voice

Is it possible to bring coral reefs back to life? Biorock Indonesia thinks so, with the help of technology and...
See more
Share this project

Giving the oceans a voice

Is it possible to bring coral reefs back to life? Biorock Indonesia thinks so, with the help of technology and...
See more