GROW fuses art and science, using lighting design to improve crop resilience and production while inspiring us to take a second (and beautiful) look at farmers and their farms.

It’s biology 101 that plants need light in order to grow. Still, each species has its preferences – you know not to put your prized orchid right in the window, and your mini cactus can probably survive a dark winter under the kitchen sink. But what about the vegetables you picked up for dinner? Are they paving the way to a brighter future? 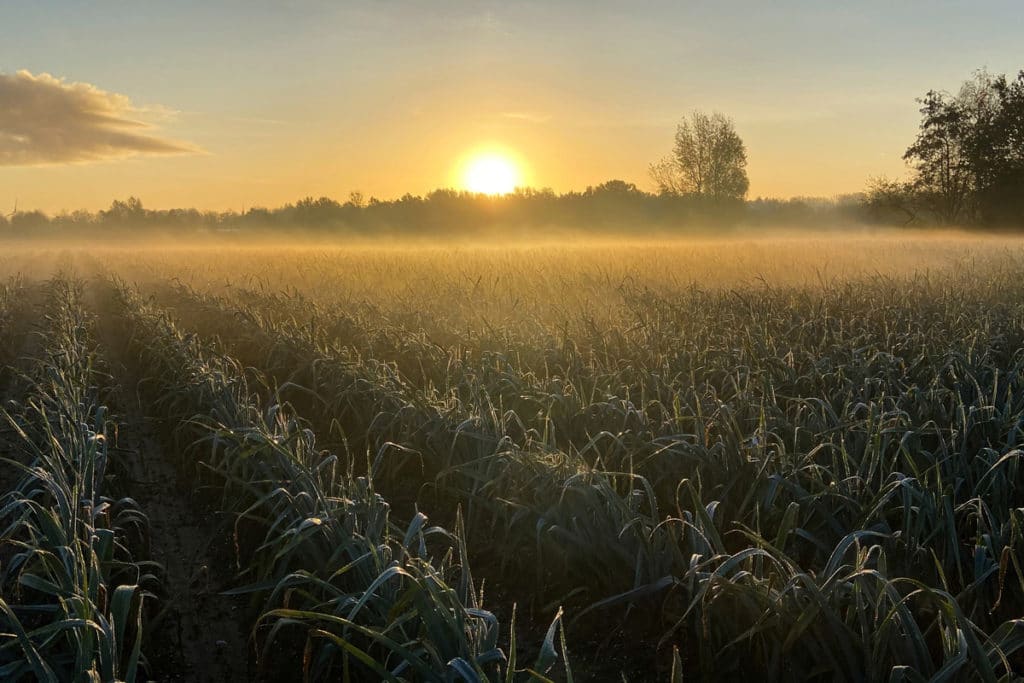 GROW, by Dutch artist and innovator, Daan Roosegaarde, proves that anything can look good with the right lighting – even the humble leek. Encouraged by prominent engineer Wiebe Daijer to take a radical stance towards creating a sustainable future for farming, Roosegaarde set out to reconnect people with their surroundings – by shining a light on the natural resources right under their noses.

Spread throughout a 20,000m² field in Lelystad, the Netherlands, GROW is the fruit of a two-year collaboration between scientists and designers at Studio Roosegaarde. By using light recipes tailored to the needs of individual plants, Daan’s team have been able to optimise the production of a variety of agricultural crops, all while forging a unique platform through which to tackle the world’s most pressing issues in food production.

“We have these huge fields in the Netherlands that people rarely notice. They’re not part of your day-to-day awareness. But they feed us.” says Daan. By infusing farmland with the kind of ethereal gorgeousness typically reserved for the ballet, the project transforms agricultural crops into a captivating visual experience. 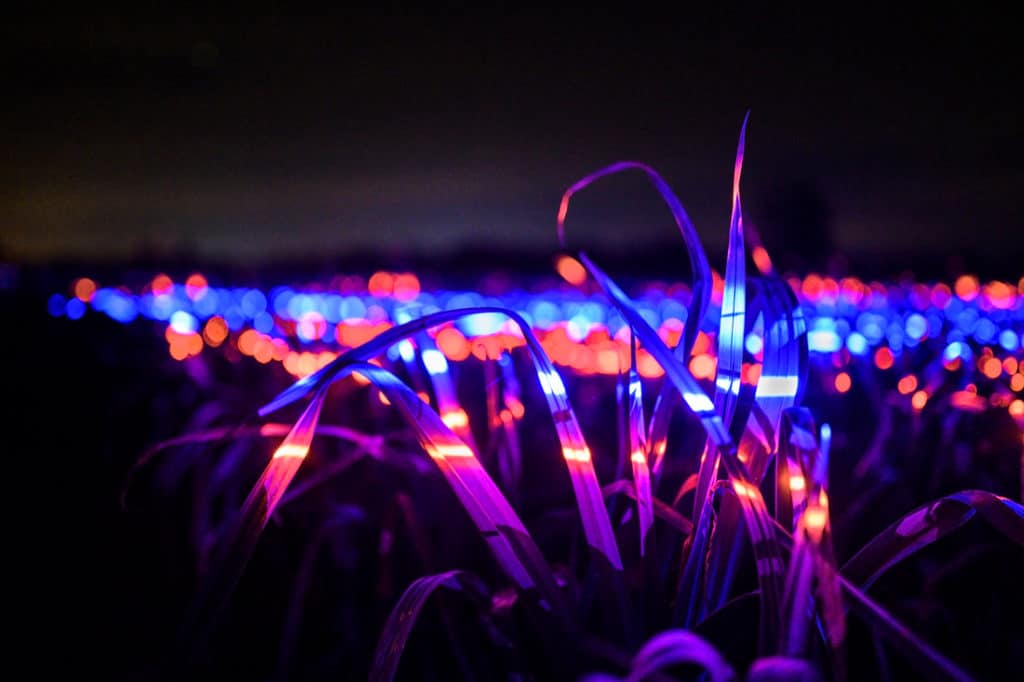 The combination of art and science that underpins Daan’s personal mantra of “Schoonheid”, or “clean beauty” can be a tough balancing act, but it’s an approach to environmental sustainability he believes we should “invest in, and make part of our everyday lives”. It is impossible not to be hypnotised by the leaves shimmering and dancing through the colourful beams, and as the mission demands, it’s not all for show.

Built on a foundation of meticulous scientific research, GROW is designed to hone in on a plants’ innate resources and maximise their efficiency. First, seedlings are exposed to UV radiation, optimising their immunity. This simple step can reduce the use of chemical pesticides by up to 50%, helping to cut down on subsequent soil and water pollution.

Then it’s out of the lab and into the fields, where a system of vertical light distribution powered by solar panels distills the sun’s light into its most effective wavelengths: red and blue light. This focused approach significantly speeds up plant growth, increasing production, and allowing farmers to meet the food demands of an ever-increasing population. 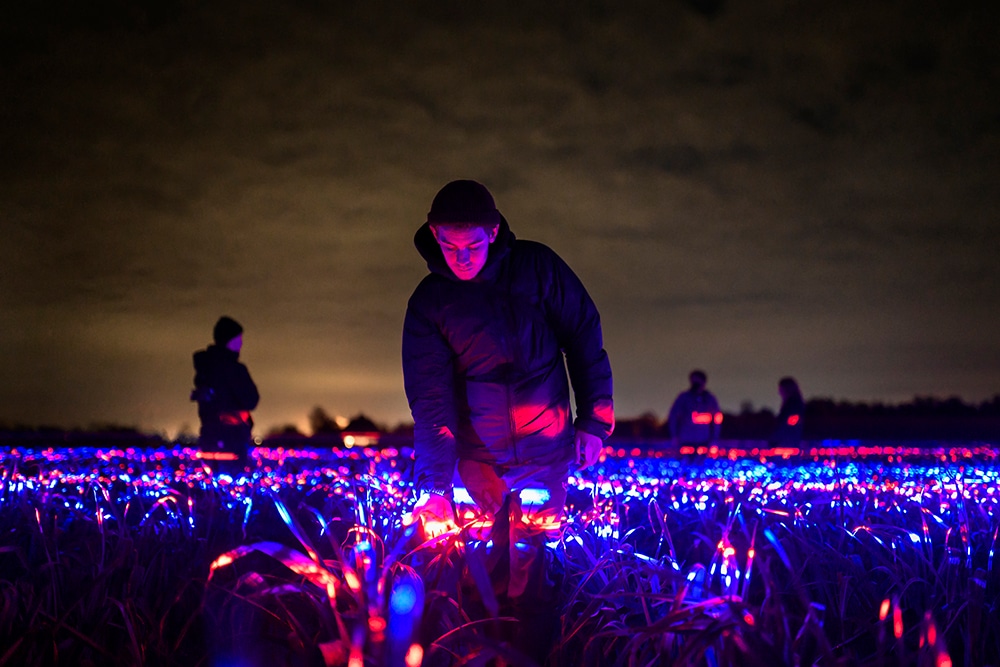 A mesmerizing sight against the evening sky, the exhibition is deactivated each night in support of the DarkSkyMovement, which aims to reduce light pollution and preserve our view of the stars.

While many projects seek to raise environmental awareness by bombarding us with statistics, Daan believes that “we don’t learn by numbers”. Instead of sparking action through fear, GROW invites us to pause in wonder while we consider the problems – a moment to breathe that helps us to visualise the solution. “We are driven by curiosity,” asserts Daan, but “if we cannot imagine a better world, we cannot create it.”

And who better to imagine a better future than the farmers themselves?

By bridging the gaps between scientific theory and farmers’ realities, GROW has opened up a forum for some important conversations. Daan aims to “avoid the blaming and shaming” narrative that has come to dominate discussions around climate change over the last few decades. Instead, “making the farmer the hero” brings our attention back to the people at the roots of our food supply, cultivating a renewed appreciation for their labor, and carving out the necessary space for green, sustainable progress.

The agricultural sector’s explosive interest in GROW has been “a happy surprise” for the whole team. This encouraging response from farmers the world over is being used as a springboard to continue the project, with plans to expand the initiative across several continents, formulating new light recipes for local crops.

Once Covid-19 restrictions are eased to allow for public viewing,“the next step will be to take the exhibition on tour, potentially to Australia and China”, explains Daan.

AtlasAction: Studio Roosegaarde is open to collaborations and commissions for anyone who would like to get involved.

Solar Foods is one of those mind-blowing future-food incubator stories that can save any dinner conversation - and perhaps even...
See more
Share this project

Solar Foods is one of those mind-blowing future-food incubator stories that can save any dinner conversation - and perhaps even...
See more