“We’re the street plants that’ll resist even when you suffocate them with concrete.”

There’s a neighbourhood in Colombia that uses art, music, and theatre to plant the seeds of justice and collective healing. Enter Agroarte Colombia, Medellín Comuna 13’s arts collective sprung out of the tragedy of Operation Orion and la Escombrera and blossomed into a symphony of colours, voices, and stories. 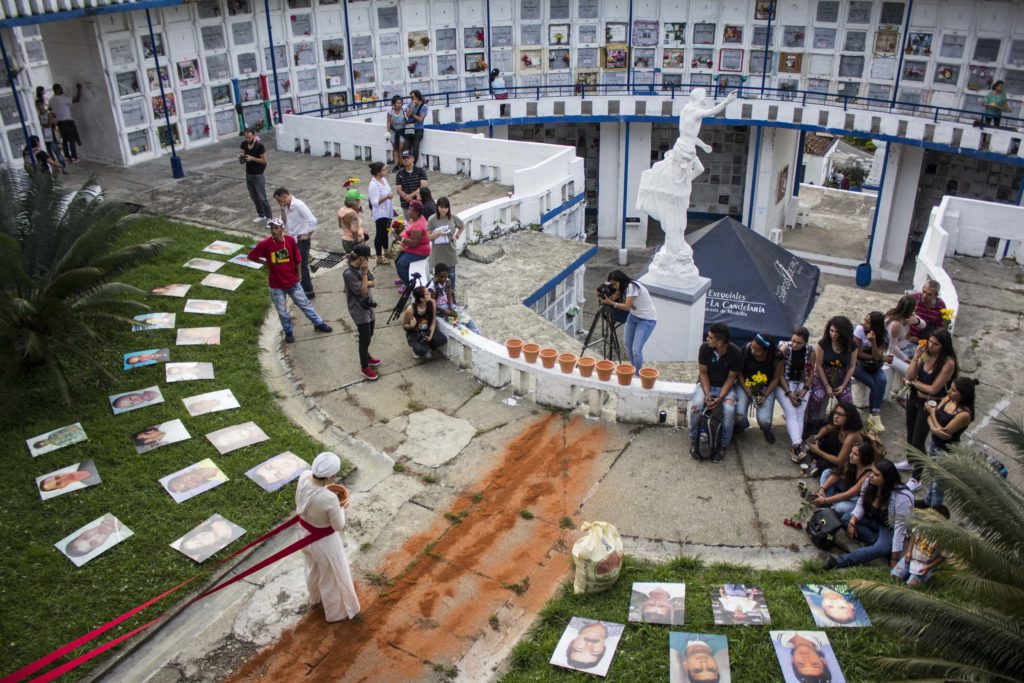 In the early hours of October 16, 2002, the army, the police, and the Colombian Air Force, together with paramilitary groups, started Operation Orion and attacked Medellín’s Comuna 13 in San Javier District, believed to be controlled by left-wing guerrilla groups including the Revolutionary Armed Forces of Colombia (FARC) and the National Liberation Army (ELN).

What followed was absolute terror for the civilians living in Comuna 13 — parents hid their children under their beds to protect them from bullets, families barricaded their house with mattresses and furniture and waved white flags calling for peace. Many of those who weren’t killed were arbitrarily arrested never to be seen again, and it’s estimated that over 2 thousand people were displaced as a result of the operation. Locals believe that the bodies of nearly 300 of their loved ones who disappeared during Operation Orion are still buried under piles of earth and rubble in what is known as la Escombrera, a dumping ground near Comuna 13. Operation Orion is just the most infamous of a long list of military operations that have victimised the residents of Comuna 13 throughout the years. 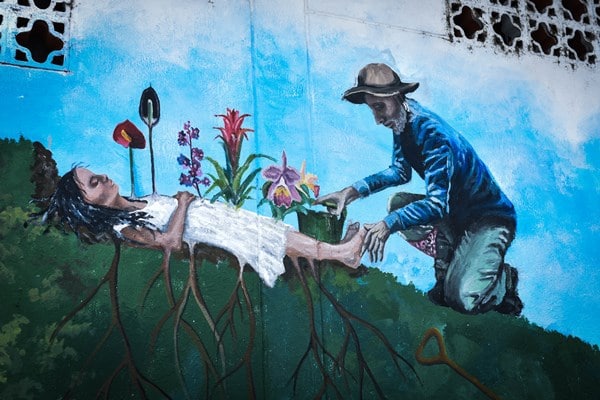 Medellín’s graffitis tell the stories of the city’s recent past.

Once the murder capital of the world (in 1991, the city had a homicide rate of 381 per 100,000 residents) Medellín has undergone dramatic change in the past few decades — known as the ‘Medellín miracle’, the second-largest city in Colombia now welcomes about 550,000 international visitors each year. Tourists can take newly built cablecars and covered escalators to the once hard-to-reach hillside neighbourhoods and book guided tours of the now popular Comuna 13. Guides show the stunning graffiti covering the neighbourhood and stop to point out significant locations in the history of drug kingpin Pablo Escobar, as well as the sobering view over la Escombrera.

However, residents of Comuna 13 aren’t willing to simply turn their wounds into entertainment, especially if this means impunity and oblivion. Right after Operation Orion, the Agroarte Colombia collective gathered to carry out creative acts of resistance rooted in community growth, collective memory, and justice. 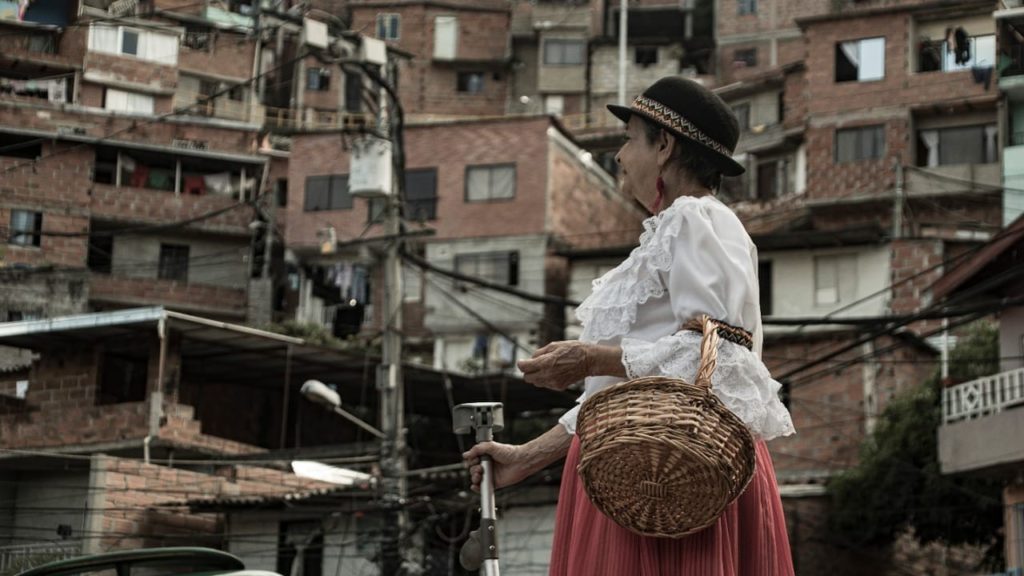 People call the rapper, farmer, and artist at the heart of Agroarte ‘El Aka’, “because of how fast I shoot out rhymes.” He explains how Comuna 13 residents weave together creativity and agriculture to allow the land and the community to heal together:

“Violence uprooted many of us from our territory. The world we dream of now is a truly inhabited land to plant with art and memory, a space to generate self-sufficiency in food and governance through the constant interaction between the city and the farmland. A place that allows us to discuss thorny issues such as peace and memory in Colombia.”

Their initiatives are landscaping Comuna 13 into a just and hospitable place for its residents. Every week, locals meet to plant flowers, medicinal herbs, and vegetables around its streets — “because plants can tell you about the land, its people and culture.” Kids attend Seeds of Future (Semillas de Futuro), classes that teach hip hop, poetry, graffiti, and other ways to have their voices heard. 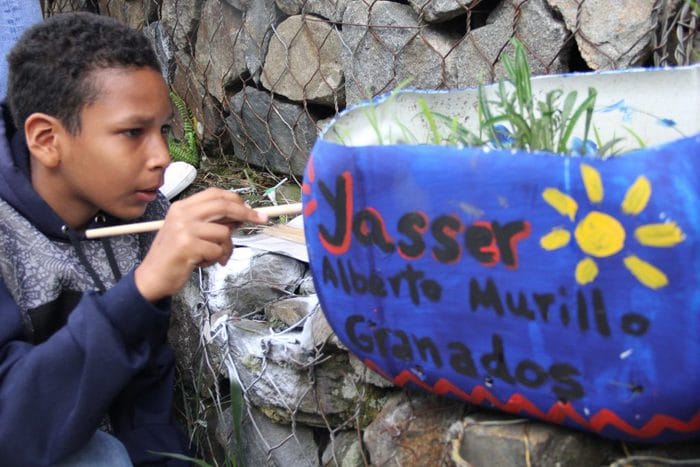 “Art isn’t just a tool, it’s everything. Each person carries a story within them, for as small or big that may be, that connects them to the world. We’re trying to help them find it and let it bloom.”

Families of the Operation Orion victims cordon la Escombrera with plants named after their loved ones, an opportunity to feel vicinity and solidarity in their pain and remind the city and the national government that the past can no longer stay buried. Musicians join forces in the Agricultural Hip Hop (Hip Hop Agrario) network to root poetry, resistance, and historic memory into a stronger social fabric — “If hip hop lives on the street, right below it is the earth, and in the earth you find our stories, our memories, and our struggles.”

The Living Gallery (Galería Viva) project painted South America’s first cemetery covered entirely of graffitis and brought to life a network of collective creation involving over 1,300 students, public libraries, cultural and educational institutions. The Women’s Party (El Partido de las Doñas) puts victims of forced disappearance and domestic and gender-based violence at the centre of the struggle for self-governance and the recognition of victims’ rights.

Perhaps one of Agroarte’s most striking actions is the performance Grammatical Bodies (Cuerpos Gramaticales). On the anniversary of Operation Orion, tens of people sow themselves into the public square by sitting in silence as they cover their bodies with soil, water them, and tend to them as you would with saplings. El Aka describes it as a cathartic event:

“We remember death through life — our bodies have gone through pain when violence was inflicted upon us and our loved ones, but they are also a place to find memories. Within our bodies, we can gather our unofficial history, the history of our communities. In our bodies and soil, you can find memories of violence but also culture, community, and tales of the Indigenous people.”

The stories of Comuna 13 have travelled far like seeds in the wind. Grammatical Bodies has been performed over 20 times around the country and crossed the ocean to be sowed in Barcelona and Guernica, Spain, where Colombian exiles and families of the victims of Franco’s regime joined for collective catharsis. The group is also performing in France in 2021. The songs by El Aka and the Agricultural Hip Hop network have thousands of views on YouTube, and new people join Agroarte’s initiatives every day. 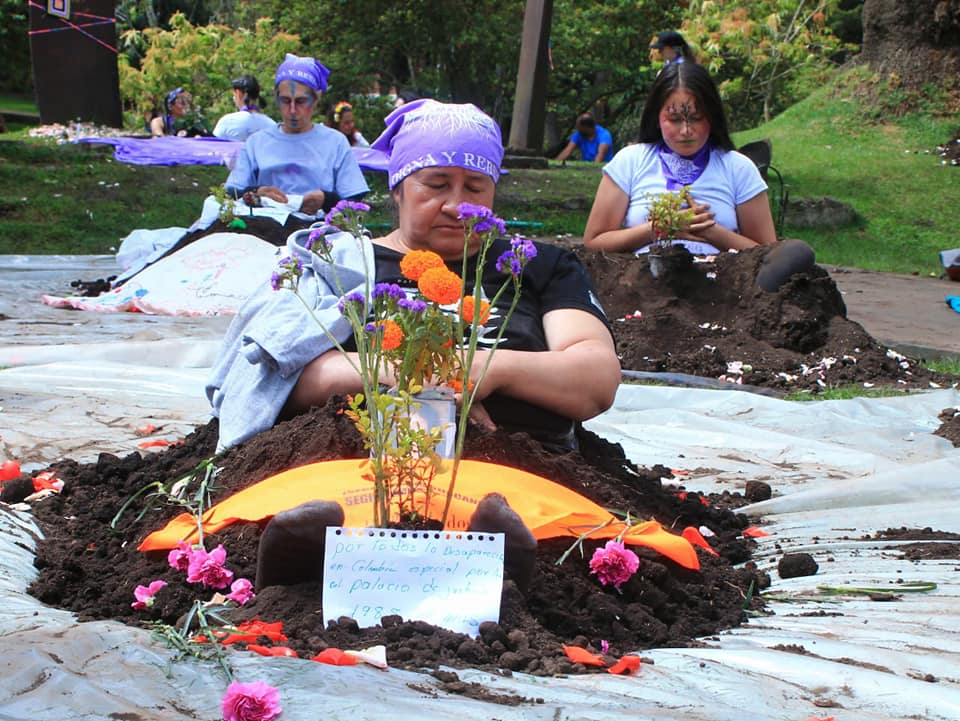 A performance of Cuerpos Gramaticales.

The collective hopes to help grassroots organisations across the world heal divided territories with empathy and (agri)culture. They believe that their peace-building approach and their way of blending the urban with the rural can bear fruit elsewhere. If Monet considered his garden to be his “most beautiful masterpiece,” then Comuna 13 residents grew a whole gallery that could leave the world in awe.

AtlasAction: Listen to the music made in Comuna 13, visit South America’s most colourful cemetery and sow seeds of future in your community. Help them build the collective learning space Casa Escuela Bótanica.

Plant a seed, build a kite, and connect with the land at Aurora de Las Sierras.   Analaura Antúnez and...
See more
Share this project

Plant a seed, build a kite, and connect with the land at Aurora de Las Sierras.   Analaura Antúnez and...
See more