Atlas of the Future
Daily adventures in a better tomorrow
Discover projects by:
Map
All projects
Search:
20.08.2019 — by Lisa Goldapple

“Ants are an example of the little surprises gastronomy can give us.”

Amazonian fruits, canastra cheese, fermented manioc, ants; these are just some of the Brazilian indigenous ingredients being championed by South America’s number one chef, Alex Atala.

Named by Time Magazine as one of the 100 most influential people on the planet, the double Michelin-starred culinary punk-superstar’s restaurant D.O.M. has consistently been one of ‘The World’s 50 Best’ for over 13 years. Currently ranked ninth, think haute cuisine with a wild jungle twist.

To eat at D.O.M. is to take a trip through the Amazon, but the journey does not stop there. The first chef to talk about anthropology within gastronomy, Alex uses his fame and voice to educate Brazilians to understand the relationships between eating, cooking and producing. He set up a foundation, ATÁ Institute, to promote Brazil’s biodiversity and food traditions, and Pinheiros fresh food market to exhibit sustainable products from small producers.

Having pondered the “meaning of life” on acid and in his dreams, Alex breaks down barriers to show Brazilians that they can be proud of their native gastronomic possibilities and culinary heritage: “Eating today is not simply feeding. It is a political, economic, biological, social and cultural act.” Lisa Goldapple chatted to the Netflix Chef’s Table star.

Alex on ingredient diversity, insects in gastronomy and the importance of the world’s biggest social network. It’s not what you think.

The three flavours that define Brazil are rice, beans and manioc. They are Ingredients that can be found in any social class in Brazil. You will find them at the lunch table any day of the week in any house in Brazil, and also at the lunch table of D.O.M.. 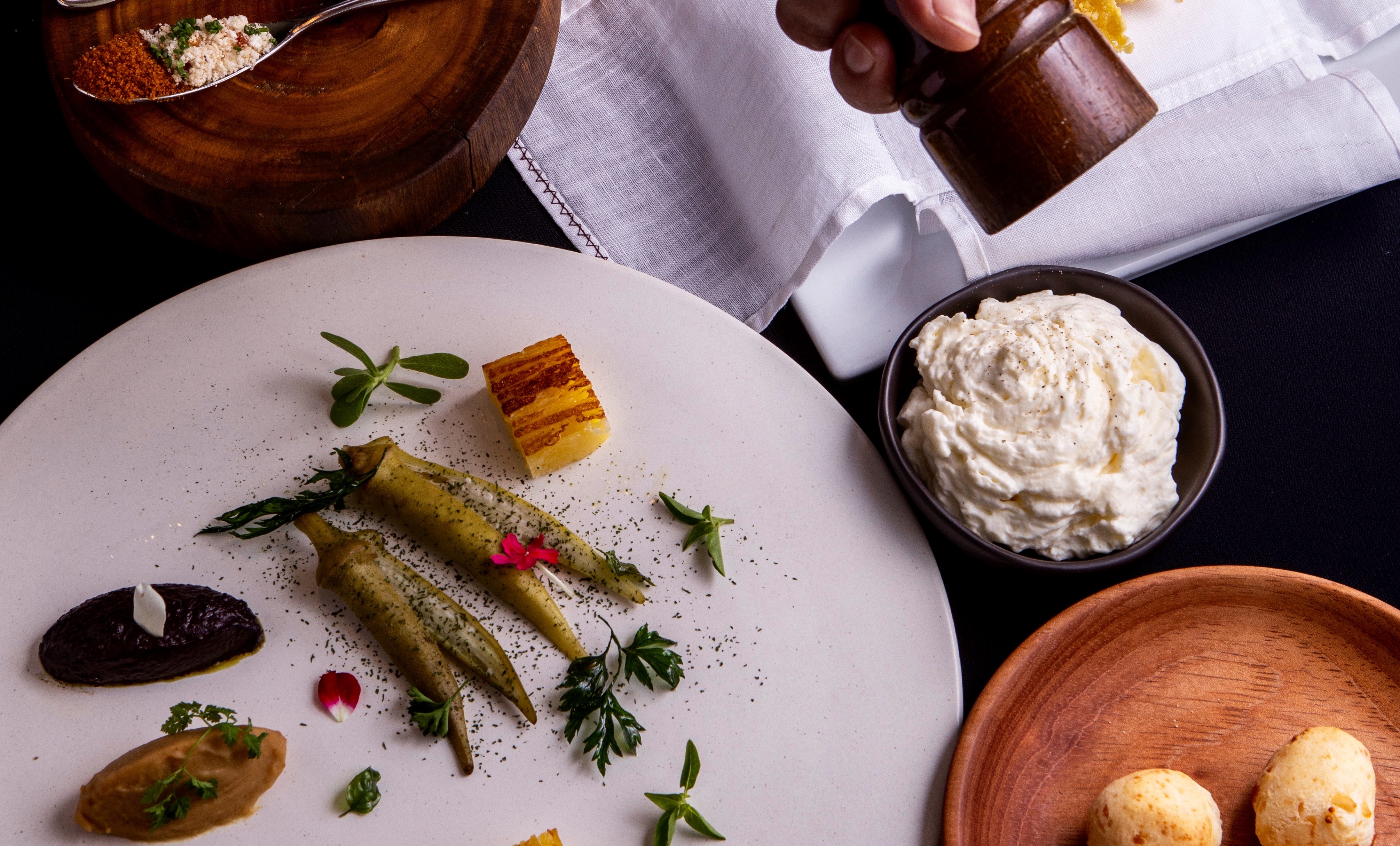 The length of Brazil is so enormous that it creates a huge diversity. We are almost a the size of a continent. Inside one single country are many different ways to deal with food, regarding culture and a giant variety of ingredients.

The enormous variety of flavours must be discovered. People must know tucupi (juice of manioc flour), our fruits, our herbs, flours, our fish, the canastra cheese. In addition to our work to ensure our ingredients are known by those who live abroad, Brazil is now on the radar of many chefs in other countries.

Excellence can only be reached with repertoire. With all the ingredients our country provides, it’s easy to acquire that repertoire.

Stirring up ideas in the Amazon | Photo: Sergio Coimbra

The biggest social network in the world is not Facebook, it is food. We are all connected by it, and it can be a powerful tool to help those who need it and the environment as a whole.

When I entered the kitchen, I never thought I would spend the rest of my life there. My training in Europe was actually an unpredicted circumstance of travelling. I first went to Europe at 18 to live the dream of music. Ramones are the soundtrack to my life. They are above criticism. Punk is awesome.

To pay the bills, I’d paint walls. But to get a permanent visa I had to enrol into a school of some kind. A friend in the same situation as I was in a cooking course. So I went with him and enrolled in the École Hôtelière de Namur in Belgium.

I started out peeling potatoes and washing dishes. I almost gave up, But when I first got to touch the fish, fresh vegetables, when I got to truffle and mushroom season… that’s when I felt my life references taking shape.

I don’t think people need to be taught how to cook, act or eat. I do believe, though, that people should act more accordingly to their personal ethics. Don’t buy or eat something you don’t agree with. That generates a new demand and the market adjusts to it. The food chain is a powerful tool also for that.

I want to get people to come out of their comfort zone and send a message. Those are the main goals to our cooking at D.O.M. today. Serving dishes with ants is one example of that.

I’m very optimistic about the idea of insects in gastronomy. Without a doubt, the ants that we use at D.O.M. have inspired many chefs to follow this idea, which many people can think is crazy. The ants are an example of the little surprises gastronomy can give us.

Ants are truly full of flavour. I believe tasty insects can and should be served in restaurants. Just as important, though, insects are a source of protein and potentially a dietary supplement for the more than 7 billion people in the world. This is fundamental and a way of transforming how we feed the world.

We have an issue: “how to feed 8 billion people?” We need to insure the survival of our ecosystems, which are being sterilised and decimated. There is no point in protecting the rivers, seas and forests if we abandon the people that live in these places to their own luck. They are the ones who will ensure the survival of nature.

The food chain is an important tool to support these populations. This is our work at the ATÁ Institute. We work in several projects to strengthen all the levels of the productive food chain.

My favourite ingredient at the moment right now is… a type of giant vanilla with a potent aroma that is truly mesmerising. It was around 2007 when I had the first contact with the wild untamed vanilla, baunilha do Cerrado, a Brazilian biome. In that moment, a dream was born. The Baunilha do Cerrado social transformation project encourages and trains the community to produce vanillas in an agro-forestrial system and greenhouses.

Our main goal is to empower communities socially through food. Baniwa are an indigenous people formed by approximately 15,000 people living in 200 communities in Brazil, Colombia and Venezuela. They produce the Baniwa chilli, an unique product made with a variety of native peppers that when dehydrated, milled and mixed with a bit of salt, form a potent spice.

The Baniwa people didn’t have the structure to commercialise it. Today, thanks to the partnership between Instituto Socioambiental and ATÁ, that chilli can be found in our stands at Mercadinho Dalva e Dito and Mercado de Pinheiros, and in restaurant dishes at D.O.M. and Dalva e Dito. Baniwa people prefer to work with the chilli instead of working with mining, for instance.

There is a cultural interpretation of flavours that has to be broken. First time I tried caviar I was like “I don’t know if that is good”. The same happened when I tasted tucupi, I was like “ok, a new flavour, but I’m not sure I like it!” Why is caviar fancy and tucupi isn’t? It is just because somebody said so?

There is a barrier in people’s minds that causes that resistance to accepting the things from our land as just as good as any foreign ingredient. We can and need to break through this barrier to experience new and interesting food and get to know amazing cultures, such as ours.

I believe the future cuisine is a common cuisine. It is necessary to convince people that certain individual actions can have a huge favourable impact in the collective as a whole.

AtlasEvent ► Alex Atala was talking to Atlas of the Future Editor, Lisa Goldapple at Fixing the future 2019 in Barcelona.